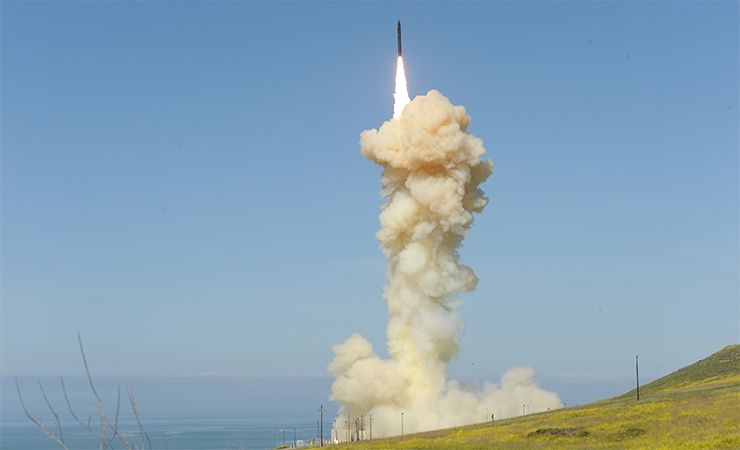 An interceptor launches from Vandenberg Air Force Base in 2019 during a test of the Ground-based Midcourse Defense system.

Last month, the American Physical Society released a 54-page study analyzing the effectiveness of existing and planned U.S. systems for defending against intercontinental ballistic missiles (ICBMs). Focusing narrowly on attacks involving a limited number of ICBMs that North Korea could hypothetically launch against the continental U.S., it argues that “current capabilities are low and will likely continue to be low for the next 15 years.” (APS is an AIP Member Society.)

This century, U.S. ICBM defense systems have been designed specifically around the threat of a small strike from a minor nuclear power, and the study notes that defense against attacks from nations such as China or Russia would likely be “much more challenging.” At a webinar on Feb. 16, the study’s leaders stressed the document’s aim is to enrich conversations surrounding missile defense without making specific policy recommendations.

The study was assembled by a group of 13 physicists and nuclear weapons policy experts chaired by University of Illinois Urbana-Champaign professor Fred Lamb. Serving as co-chairs were University of Michigan professor James Wells and Laura Grego, a fellow at the MIT Laboratory for Nuclear Security and Policy on leave from the Union of Concerned Scientists, an advocacy organization.

Current and prospective U.S. missile defense systems are built off six decades of work that has cumulatively cost over $350 billion in inflation-adjusted 2020 dollars, according to a short paper prepared by study group member Frank von Hippel.

The paper charts a rise in spending following President George W. Bush’s decision to withdraw the U.S. from the Anti-Ballistic Missile Treaty in 2001 and initiate programs that guard against limited attacks from “rogue” nations. According to von Hippel, a co-founder of Princeton University’s Program on Science and Global Security, further increases in the last five years reflect an “enthusiasm for ballistic missile defense in both Congress and the Trump administration.”

The APS study addresses challenges associated with the three distinct phases of an ICBM’s flight: the rocket-powered boost phase, the unpowered midcourse phase in space, and the brief terminal phase of atmospheric re-entry.

The Ground-based Midcourse Defense (GMD) is the only system currently deployed to defend the continental U.S., with 44 interceptors based in Alaska and California. Although recent GMD tests have been successful, the study notes the system has been tested far less frequently than is typical for a deployed weapons system and that its overall performance record in tests has been uneven, revealing problems in design and quality control. The study particularly questions whether GMD could reliably overcome the countermeasures incoming missiles are likely to deploy, arguing decoys used in tests to date have been insufficiently realistic.

The study group sees no signs the shortcomings it identifies with GMD will be remedied soon. It observes that some projects designed to patch recognized flaws in the system, such as the Redesigned Kill Vehicle, have been terminated after running into difficulties.

In addition, the group is unimpressed with the “layered” missile defense system the Department of Defense announced two years ago to supplement GMD.

One component of the layered system involves adapting the Navy’s sea-based Aegis system and the Army’s Terminal High-Altitude Area Defense (THAAD) system from their current use in regional defense outside the U.S. However, the study asserts it is unclear how difficult it will be to upgrade the scale and capabilities of Aegis and THAAD systems to successfully intercept ICBMs over an area the size of the U.S.

The study allows that another component, the planned Next Generation Interceptor, could address some drawbacks in the current GMD system. Nevertheless, it conveys doubt that the 21 interceptors DOD plans to field later this decade will make a major difference to overall system effectiveness, flatly stating, “For the simplest of threats, such as a single missile or a few with the type of simple countermeasures the system is designed to handle, this full system may provide some capability.”

The study also offers a new analysis of the possibility that ICBMs could be destroyed during their boost phase, before they can deploy countermeasures. While technologies such as drone-based and space-based interceptors have been proposed for such purposes, the study concurs with other assessments that it is impractical to design a system that could be constantly in position to intercept a missile during the few minutes the boost phase lasts. The study deems another proposed option, high-power airborne lasers, technically out of reach.

APS group and DOD differ on adequacy of tests

Asked by the news outlet Breaking Defense about the APS study’s criticisms of GMD, a spokesperson for DOD’s Missile Defense Agency pointed to successes achieved in recent tests under “operationally realistic scenarios.”

However, the study asserts that DOD tests prioritize visibly demonstrating system capabilities rather than determining how the system would function in the more challenging conditions it is likely to face. The study also suggests that staging successful tests is necessary to furthering the department’s stated goal of using them to discourage hostile nations from seeking to develop nuclear missile capabilities.

In criticizing the realism of tests, the study alleges decoys have been made intentionally easier to discriminate from the test target and observes the system has never been tested in a scenario involving a salvo of multiple incoming missiles. The study also cites Government Accountability Office audits showing that the Missile Defense Agency has fallen considerably behind its schedule of planned tests, which the study notes require extensive infrastructure and can cost between $200 million and $300 million each.

At the Feb. 16 webinar, James Wells stressed the importance of convincingly demonstrating a system’s total reliability. He explained, “What we mean is that if a potential adversary like North Korea were to launch ICBMs towards the United States, we can feel assured that millions of people will not die. Since just a single nuclear weapon can create such untold devastation, we believe it is this level of assurance that is needed for the system to be deemed effective and reliable.”

Goal is to make mark on long-running debates

Putting their work in context at the webinar, the study group leaders emphasized it is part of a large body of analytical work surrounding missile defense that has been built up over decades. That work includes two prior in-depth APS studies: one on space-based laser systems released in 1987 and another on boost-phase interception that was co-chaired by Fred Lamb and released in 2003.

Unlike those earlier studies, the current study group did not perform extensive technical analysis of its own, but instead drew on various open-source documents. Wells said the effort was motivated by a desire to take a broad look at the prospects of the newly proposed layered defense system.

“That was our hope: one large report — hopefully not too large for citizens, for policymakers — to put it all together in one place to be able to see a full picture and then evaluate. And then we make decisions from there with eyes wide open,” he remarked.

Responding to an audience question about how the Missile Defense Agency has previously downplayed external studies because they lacked access to classified information, Lamb pointed out that the new study draws on a 2012 National Academies study that did have access to such information. He also noted that the study group made use of annual reports by DOD’s own Office of Test and Evaluation as well as GAO audits.

Asked about what the study could accomplish given the long history of political support for missile defense in the face of criticism, Lamb argued that prior studies have been consequential. He suggested, for instance, that the 2003 study helped draw skeptical attention to boost-phase systems that were ultimately cancelled. He also credited APS for its ability to leverage studies to drive broader conversations and policy advocacy.

Laura Grego framed the study as an opportunity to pass judgment, saying, “This study comes after, for example, 20 years of fairly unlimited budgets on the GMD system and quite a lot of latitude in development. And so we've run this experiment. We've said, does this work? And we provided a pretty thorough assessment of where that system lies, and it does not work very well.”

Physicists have sought to influence U.S. nuclear weapons policy from the earliest days of the nuclear era, working through a variety of organizations including APS. However, this is the first time APS has released a report on the subject since 2013.

Over the last two years, APS has supported efforts to rekindle interest in nuclear affairs within the profession through a group called the Physicists Coalition for Nuclear Threat Reduction, which is also working to diversify the cohort of those who are involved. Some of the coalition’s leaders, including Lamb, Grego, and von Hippel, also took part in the new missile defense study.