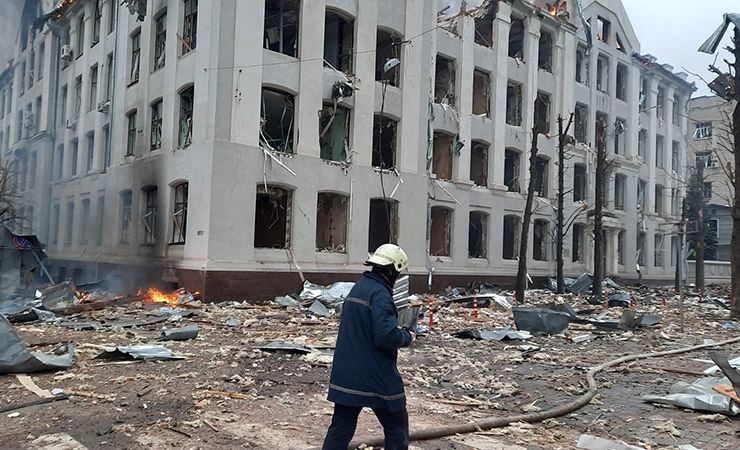 A damaged building at the National University of Kharkiv in Ukraine.

Now one month in, Russia’s invasion of Ukraine has inflicted enormous damage on Ukrainian science and upended collaborations with Russian scientists as nations have worked to isolate the Russian government.

Scientific institutions around the world have unequivocally extended support to Ukrainian scientists, but many are grappling with how to treat partnerships with Russia, particularly given the historical regard for science as a haven for peaceful international exchange. Some countries such as Germany rapidly froze bilateral science partnerships, while others have not taken a national position, including the U.S.

Frozen relations have primarily affected collaborations at the institutional level, but scientific journals have also faced calls from some Ukrainian scientists to boycott submissions from Russian authors. So far, various publishers have indicated they have no plans to do so.

Ukrainian scientists have been forced to abandon their work en masse and universities have been severely damaged as Russia has laid siege to major cities in southern Ukraine and the country’s eastern borderlands. For instance, the Kharkiv Institute of Physics and Technology, which houses a recently built neutron source, has been badly damaged.

To aid refugee scientists, this week the European Union created a portal of information about support programs that have been stood up across Europe. The U.S. National Academy of Sciences also launched an initiative last week to help raise funds for scientists and their families to resettle in neighboring Poland.

In addition, a group of U.S. scientific societies has petitioned the White House and Congress to expedite visas for Ukrainian scientists. (Several AIP Member Societies are signatories of the letter.)

The American Physical Society, one of the signatories, held a special session at its annual March Meeting last week to receive feedback on its response to date, and to hear from its members on how they have been affected by the war.

Several scientists who are originally from Ukraine shared harrowing stories from colleagues caught up in the war and pressed APS to do more. One sought to counter the view that the vast majority of Russian scientists oppose the war, which emerged after open letters condemning the conflict were signed by many Russian scientists.

“If you think that Russian-born scientists overwhelmingly reject Putin’s war, even those who have positions here in United States, you are mistaken,” he said, citing in part a letter in support of the war signed by the leaders of more than 200 Russian universities.

Addressing that letter and the prospect of APS journals boycotting Russian scientists, APS CEO Jonathan Bagger remarked, “We do not know [who has] been forced to sign those letters. We have a tradition of not supporting boycotts in this country [and at the] American Physical Society. This has been the tradition throughout many other terrible situations in history as well.” However, he noted the APS board of directors is continuing to deliberate on the matter.

Across the world, national governments and scientific institutions have been forced to weigh the extent to which sanctions against Russia should extend to scientific exchanges. The issue has been most pronounced in Europe.

Within a day of the invasion, Germany imposed its freeze on bilateral science partnerships. A host of European countries soon followed suit, and some of the restrictions have been expanded to include Belarus, given its role as a staging ground for the invasion. The European Union also suspended Russia’s participation in its flagship science grant programs, Horizon Europe and Horizon 2020.

Germany’s federal research ministry clarified its restrictions this week, according to reporting by the publication Science|Business, saying it would halt all its research collaborations involving “technology and know-how transfer” while granting non-governmental institutions leeway to determine whether or not to sever ties.

The European Space Agency announced last week it was suspending most cooperation with Russian space agency Roscosmos, derailing the scheduled launch of their ExoMars mission in September, and disrupting plans for other launches and missions relying on Russian-built equipment.

The Europe-led particle physics lab CERN has suspended Russia’s “observer” status, which allowed it to attend lab governance meetings. CERN also prohibited new collaborations with Russian institutions while allowing scientists from the country to continue working at the lab. Although Russia is not a CERN member state, it has maintained formal ties with CERN since 1967, when the lab was regarded as a locus for cooperation during the Cold War. Currently, more than 1,100 scientists affiliated with Russian institutions are involved in the lab’s experimental program.

The situation is more complicated for the ITER fusion facility under construction in France, for which Russia is one of the founding members. A prominent EU lawmaker has called for Russia’s expulsion from ITER, but a European official observed last week that the founding agreement for ITER has no expulsion mechanism.

Russia is also a major partner in the European X-ray Free-Electron Laser, which began operations in 2017, and the in-construction Facility for Antiproton and Ion Research, both located in Germany. Both facilities have announced they are freezing collaboration with Russian institutions, though it is unclear whether Russia can be completely excluded.

In a statement released today, leaders of the laser facility wrote they “will not start new agreements with Russian institutions and will suspend existing ones, while respecting the legal obligations of European XFEL.”

Some governments and institutions outside Europe have also announced blanket restrictions on scientific cooperation. For instance, the Australian National University has suspended all ties with Russian institutions, and Canada has instructed its science agencies to “refrain” from starting new collaborations with Russia while allowing individual interactions to continue.

Canada’s science ministry explained in a statement, “Recognizing the historic role that scientists, academics, and researchers have played in defending freedom from tyranny, we do not call for a broad ban on collaborations with individual Russian researchers. However, we have asked the research-granting agencies to implement strict measures to prohibit funding for research collaborations that could further the interests of Vladimir Putin’s regime.”

US stance unclear, but ties with Russia chilled well before invasion

U.S. science agencies have not announced their stance on collaborations with Russia. Contacted by FYI, the Department of Energy Office of Science declined to comment and the National Science Foundation referred questions to the State Department’s bureau for scientific affairs, which also declined to comment. The White House Office of Science and Technology Policy declined an interview request but indicated in a statement last week it is “not aware that any federal grants have been canceled.”

However, cooperation between the countries has already rapidly chilled over the past decade, particularly following Russia’s annexation of Crimea in 2014. For instance, NASA restricted interactions with Russia in response to the annexation, except for their joint operation of the International Space Station. Since the Ukraine invasion, Roscosmos head Dmitry Rogozin has made a series of belligerent remarks toward the U.S. that suggest the partnership is under strain. Nevertheless, NASA reports that the ISS is continuing to operate smoothly, and a U.S. astronaut remains scheduled to accompany Russian cosmonauts on a Soyuz capsule returning to Earth next week.

In the wake of the Crimea annexation, the U.S began ratcheting up targeted sanctions and export controls on Russia. More recently, some Russian research institutes have been singled out for export restrictions, among them the Moscow Institute of Physics and Technology, a major research university.

Since the invasion, these measures have become much more severe, with export controls expanded to semiconductors, telecommunications, lasers and sensors, and the oil and gas sector, among other areas. These restrictions are aimed at hobbling Russia’s industrial capacity in high technology, but they have also hit academic research, particularly as various major scientific equipment manufacturers have halted certain deliveries to Russia, at least in part due to the new policies.

While the U.S. government has not included scientific exchanges in its sanctions, some universities have taken steps on their own, including MIT, which terminated a partnership with the Skolkovo Institute of Science and Technology that it launched a decade ago to help build research capacity in Russia.

MIT president Rafael Reif explained in a statement, “This step is a rejection of the actions of the Russian government in Ukraine. We take it with deep regret because of our great respect for the Russian people and our profound appreciation for the contributions of the many extraordinary Russian colleagues we have worked with.”

Uranium supply may be upended

Although Russia will bear the brunt of U.S. sanctions, there are some areas where the U.S. has some dependence on Russian resources, particularly in the energy sector.

Notably, more than 15% of U.S. uranium supplies originate in Russia, and Russia commands a significant fraction of global capacity in uranium enrichment. This could become a particular problem for proposed advanced reactors, such as the Natrium plant the company TerraPower is planning to build in Wyoming, as many will require high-assay low-enriched uranium (HALEU) supplies that at present can largely only be obtained from Russia.

For the time being, the U.S. has not imposed a ban on imports of Russian uranium, though some in Congress are pushing for one. The situation could also place more momentum behind the Department of Energy’s current efforts to build up a domestic supply for HALEU, which has been a congressional priority.