Inside the Papers of Karl K. Darrow 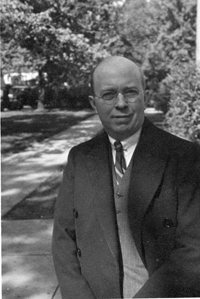 It is rather intimidating to write about the papers of Karl K. Darrow.  Dr. Darrow was a 20th century intellectual and lived most of his very refined life in Manhattan.  He was a physicist, a prolific writer, a gifted and witty speaker, a world traveler, an ardent patron of the arts, a connoisseur of fine food, and a guardian of decorum and proper manners.  Thus, were he to be displeased with any of this effort, he would not hesitate to let the writer know – most often with subtle humor and, at times, with more than a little sarcasm.

The Darrow Papers are one of the broader collections in the Niels Bohr Library and Archives.  While there is a great deal to satisfy any serious historian of physics, there is much to be learned and observed about what could be called the intellectual and/or cultural history of mid-century America and Europe.  Some topics of interest include:  everyday life and social interaction in Manhattan; women’s issues at the time of World War II and after; international travel, as well as travel throughout the U.S. at that time; the arts in New York including the New York Philharmonic, the Metropolitan Opera, Broadway theater, and saving Carnegie Hall in the late 1950s; Darrow family genealogy and correspondence, including a few letters of famed trial lawyer Clarence Darrow, who was Karl’s uncle. 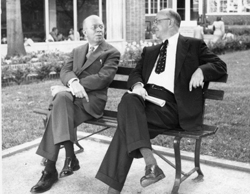 There are also two unique aspects of this collection.  One being that Dr. Darrow kept a diary throughout most of his life, starting at the age of ten, and most of these are included.  They start in 1902 and go through 1976 and include some account books and travel journals. There are a few missing years and a significant gap from 1929-1934.  Otherwise, they are all there to offer a glimpse into the life of developing writer and intellect.

The other unique aspect is that much of the correspondence in the collection is two-way.  Dr. Darrow typed most of his letters, and he kept carbon copies of nearly all of them.  Therefore, both sides of the conversation are included.  It offers a rare glimpse into written conversations, which in that time were a primary means of communication in both business and in social life. 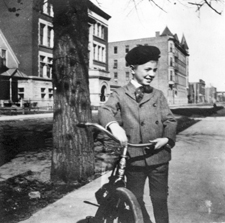 Karl Kelchner Darrow was born in Chicago in 1891.  His father, Edward  Everett Darrow had been sent to Europe for his education in the late 19th century and was a high school teacher in the Chicago public schools.  His mother, Helen Kelchner Darrow, was an early graduate of the University of Chicago and was a pianist and organist.  He married Dora Elizabeth Marcy, a professor of botany at Hunter College, in 1943. 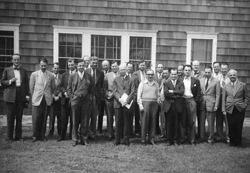 He began his career as a research physicist at Western Electric in New York City in 1917.  When the company incorporated as Bell Laboratories in 1925, he continued his employment there as a science writer through his retirement in 1956.  He produced more than 200 articles for professional and technical journals, including many for the Bell Laboratories Technical Journal.  He also wrote numerous critical reviews, obituaries of scientists, encyclopedia entries and four books, one being Atomic Energy (1948),  which was a result of his work during World War II when he abstracted classified literature for the Metallurgical Laboratory of the University of Chicago.

While all of these accomplishments and experiences were the foundation for Dr. Darrow’s sophisticated and stimulating life, it was his role as secretary of the American Physical Society from 1941-1967 that put him at the center of the physics community and much of the intellectual world in which he lived.  He corresponded at some point with nearly every physicist of the day.  His influence on the physics community can also be observed in other collections held here at the Niels Bohr Library, such as the extensive Records of the American Physical Society, the American Institute of Physics, the papers of George Pegram, Lawrence Cranberg, Henry A. Barton, and Elmer Hutchisson and others.  He arranged most of the APS Meetings which afforded him acquaintances with hotels, restaurants, and various purveyors of travel services.  He traveled to meetings all over the world. 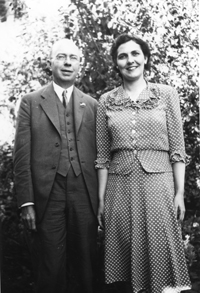 He and Mrs. Darrow had a long-term lease on a home in Switzerland and spent alternating summers there and in San Francisco where they owned a home.  The descriptions of their travels, before airplanes, and the varied post cards from friends around the world are another unique and enlightening part of the collection.

Karl Darrow knew and experienced a broad array of subjects in the sciences, the arts and humanities.  He was a true 20th century Renaissance man, and the collection of his papers is a fascinating example of a life well lived.  He died in June 1982 at the age of 90.

For more information about Darrow see the finding aid to the collection or his oral history interview.

A blog about the history of physics collections of the Niels Bohr Library & Archives.