Photos of the Month: The USNS Kane

Photos of the Month: The USNS Kane 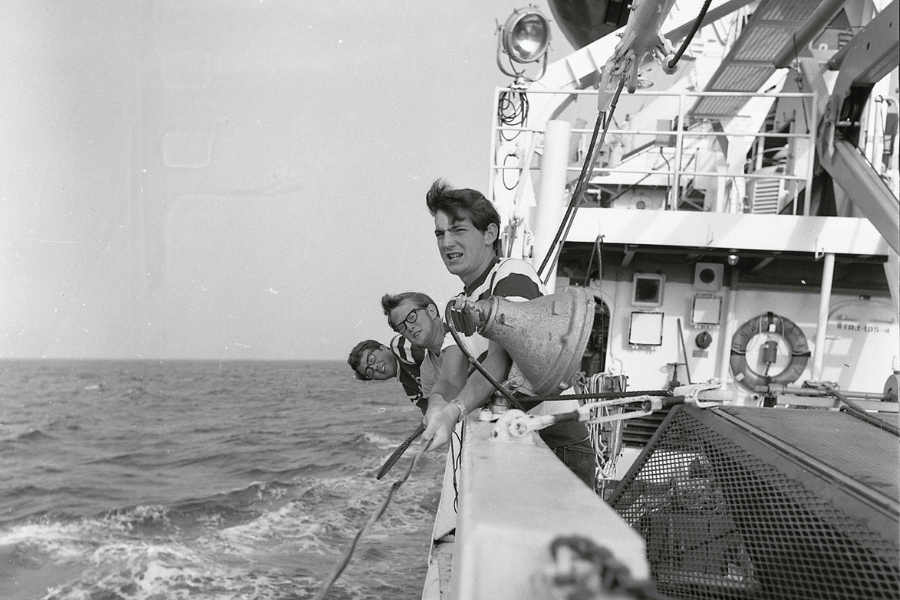 Bill Phillips, Rich Schneider and Bill Woodward leaning over the side of the USNS Kane. [Kane F207]

‘Tis the season for candy canes, but not the kind you’re thinking of! It’s time for the Photos of the Month again, and this month the focus is squarely on the USNS Kane. The Emilio Segrè Visual Archives holds a collection on the USNS Kane, a gift of Bill Woodward who served on the ship.

The United States Naval Ship (USNS) Kane was born out of a push for basic oceanographic research in the middle of the Cold War. The third National Academy of Science Committee on Oceanography (NASCO) was established in 1957, and published a report in 1959 which urged a much greater investment in oceanographic research. NASCO explicitly warned that failure to do so would put the United States at a great disadvantage in comparison to other countries when utilizing the resources of the ocean. The International Geophysical Year (1957-1958) and the launch of Sputnik (October 1957) gave additional impetus to this push. The NASCO report led to immediate investment in new oceanographic vessels as well as a ten-year Naval program, part of which included the construction of a new class of 285-foot oceanographic ships which would be designed especially for oceanographic surveys. [4] One of these was the USNS Kane! 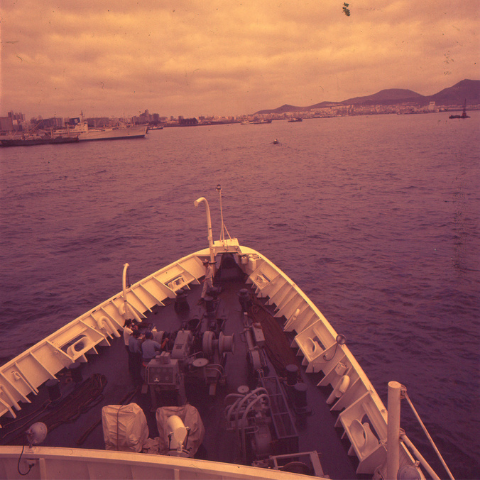 View of the bow of the USNS Kane, including equipment. [Kane F117]

The Kane was named for Elisha Kent Kane, who was a nineteenth century U.S. naval officer, scientist, and arctic explorer, and sailed by the Military Sealift Command under the technical direction of the Naval Oceanographic Office. During the 1968 voyage featured in this collection, the Kane was captained by Jesse McCandless and carried a crew of 49 (including 13 officers and 5 chief petty officers) along with approximately 30 scientists. [2]

The USNS Kane had a spotlight early on, sailing on her first voyage in July 1967 straight from Bayonne Military Ocean Terminal to Canada’s EXPO in Montreal. Then in March 1968, the ship was featured in a TV special on NBC. [6] One article described the ship as a “floating laboratory,” a very astute description given how chock-full this ship was with scientific equipment. [6] A visitor to the ship in Fall 1968, Captain Thurman Kelso Treadwell, remarked: “Recently I took a ten-day cruise on board our newest ship, the USNS KANE. The voyage was not only extremely pleasant, it was also a real eye-opener for me. It demonstrated vividly how much survey and research techniques have changed and improved in the past ten years.” [1] 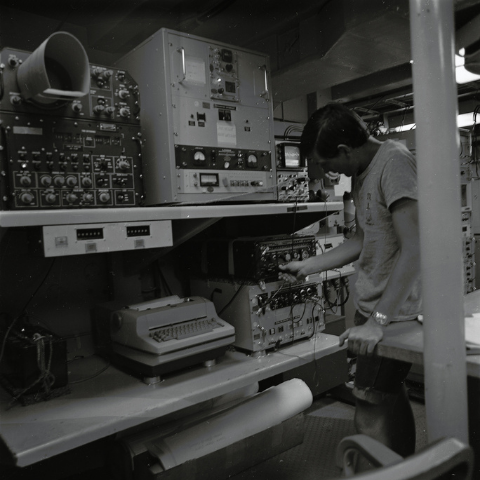 The instruments on board for oceanographic surveys can be roughly divided into two groups, those designed for use “underway” and those for use “on station.” Underway means that these instruments are towed behind the ship while it travels at constant speed. This included sensors to measure ocean depth, magnetic field, surface water temperature, and sub-bottom contours. 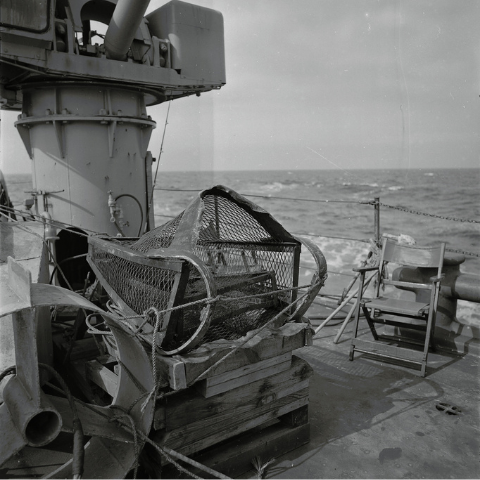 Bottom dredge, used for dragging through the water, on deck of the USNS Kane. [Kane F221]

In contrast, “on-station” sensors go over the side of the ship while it remains relatively motionless and can measure things from the surface to the ocean bottoms such as salinity, temperature, and even underwater light intensity. Still and video cameras could also be sent over the side. 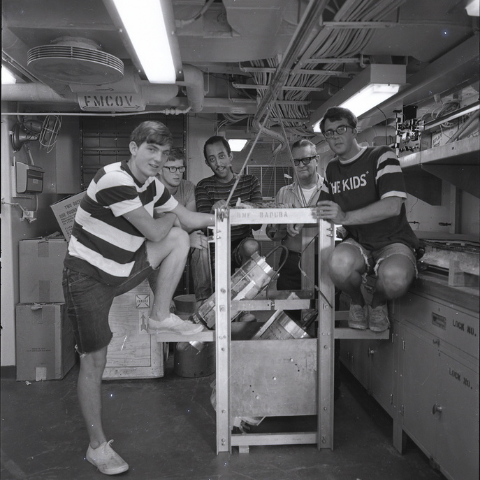 One of the most common on-station experiments involved the use of “Big Charley,” a 2,000-pound corer. “Big Charley” would be lowered to within 20 feet of the ocean bottom, before being released for free fall which would drive the coring rod into the sediment, picking up a sample. Then the whole thing would be hoisted back on board. [6] 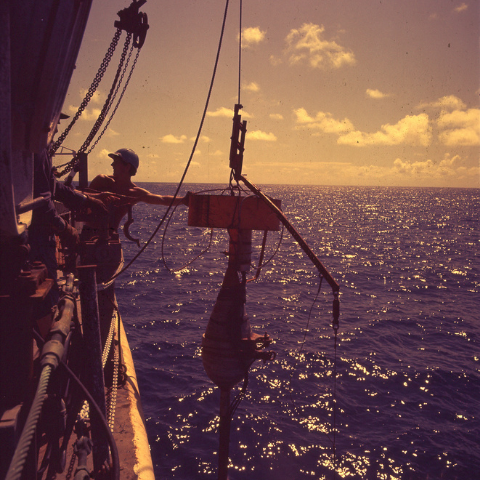 Bill Phillips holding the 2000 lb. coring weight (also known as "Big Charley") over the side of the USNS Kane. [Kane F103]

Whether gathered via “underway” or “on station” instruments, all digital data was transmitted to the ship’s on-board IBM computer system which could do some data correction and create figures using additional inputted information such as time and satellite navigation. All digital data was also stored on magnetic tape. In addition, there was of course a great deal of physical data in the form of geological and biological samples. These could also be preserved on board in chilled or frozen storage. 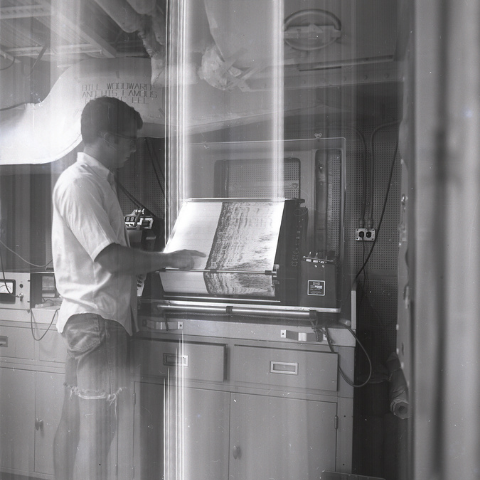 Bill Woodward pointing to data readings on the seismic plotter aboard the USNS Kane. [Kane F136]

At the time this photograph collection was taken, the Kane was on its first data-gathering voyage as part of Project GOFAR (Global Geological and Geophysical Ocean Floor Analysis and Research). In November 1967, Dr. Bruce Heezen pitched the project to the Naval Oceanographic Office as a way to “unravel the history of the Atlantic Ocean floor.” [5] Over the course of the summer of 1968, Heezen and other scientists collected data on the Mid-Atlantic Ridge, focusing on fracture zones in the ridge. 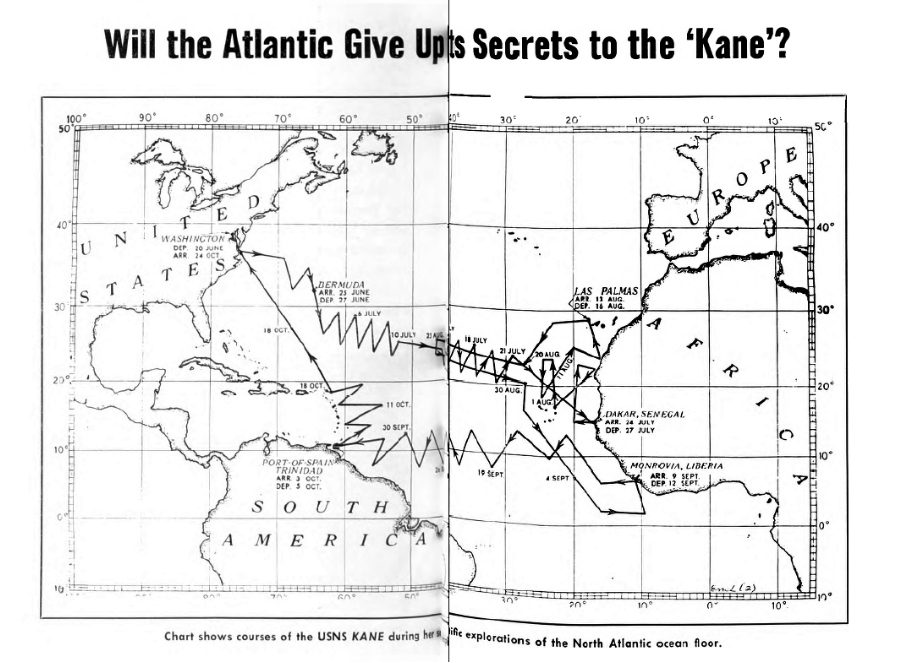 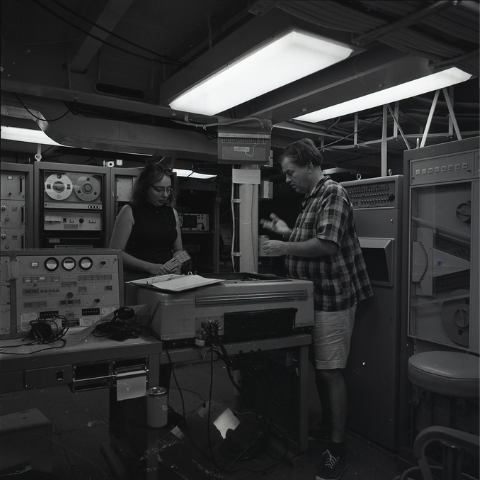 Besides Heezen, the project team also included Marie Tharp who worked with Heezen at the Lamont-Doherty Geological Observatory. Together they did groundbreaking work confirming the theory of continental drift and leading to the overall theory of plate tectonics. [7] Also on board were scientists from multiple universities and graduate students from MIT and Catholic University, including the donor of the images featured in this Photos of the Month, Bill Woodward, who was earning his master’s degree in Ocean Engineering from Catholic University at the time of the voyage.

The USNS Kane’s adventures would continue long after the summer of 1968. Just that fall the Kane again set sail for the Caribbean to characterize the ocean’s floor. This time, in collaboration with the U.S. Geological Survey, they would use the then-most-powerful acoustical profiler, a.k.a. a “sparker,” which was capable of discharging an electric pulse around 200,000 Joules at the surface of the ocean. This electric pulse then generated an acoustic pulse which traveled down 15,000 to 20,000 feet to reflect off the sea floor. This data would then be compared to data gathered from coring in order to study the sediments covering the substructure of the Puerto Rican Trench. [3] The Kane’s voyages continued over the next few decades until the ship was eventually decommissioned in 2001.

For more information about what life was like for scientists researching at sea, and to hear more about the careers of Bruce Heezen and Marie Tharp, I absolutely recommend checking out a new web exhibit at the Center for History of Physics on the history of the Research Vessel Vema.

With thanks to Sal Mercogliano and Sam Robinson for their help in finding background information on the USNS Kane.

*All photographs above are part of the AIP Emilio Segrè Visual Archives USNS Kane Collection, Gift of Bill Woodward.