On July 16th, 2020, it will have been 75 years since the detonation of the first atomic bomb. This event, known as the Trinity Test, occurred at an Army Air Forces bombing range near Alamogordo, New Mexico. This successful test set the stage for what has been called “The Atomic Age” in human history, and we have yet to leave this age. It would be hard to exaggerate the impact this test had on the course of history, but much of the impact it has had for people (both 75 years ago and today) is symbolic. There is a sense that on this day humanity opened a door that we may never close. The test also gains significance in the mind’s eye because we know what followed it: Hiroshima and Nagasaki. The seventy-fifth anniversary of those events is also now only a few weeks away.

At the time, of course, the Trinity Test itself and the results were shrouded in secrecy. (How did they keep an above-ground nuclear explosion in New Mexico a secret? With difficulty.) But now, decades later, the name “Trinity Test” is well known even though the details of the event may be unfamiliar except to specialists. With that in mind, the Center for History of Physics and the Niels Bohr Library and Archives have collaborated to put together a selection of materials regarding the history of the Trinity Test and its aftermath. We hope readers will sit with the gravitas of this event, at least briefly, and learn more about its history.

Dr. Wellerstein has made the history of the Manhattan Project his specialty and five years ago wrote an article for The New Yorker on the occasion of the 70th anniversary of the Trinity Test. The article goes into depth on the details of the momentous day, and his flowing writing makes this a great place to start for those new (or not-so-new) to the history: 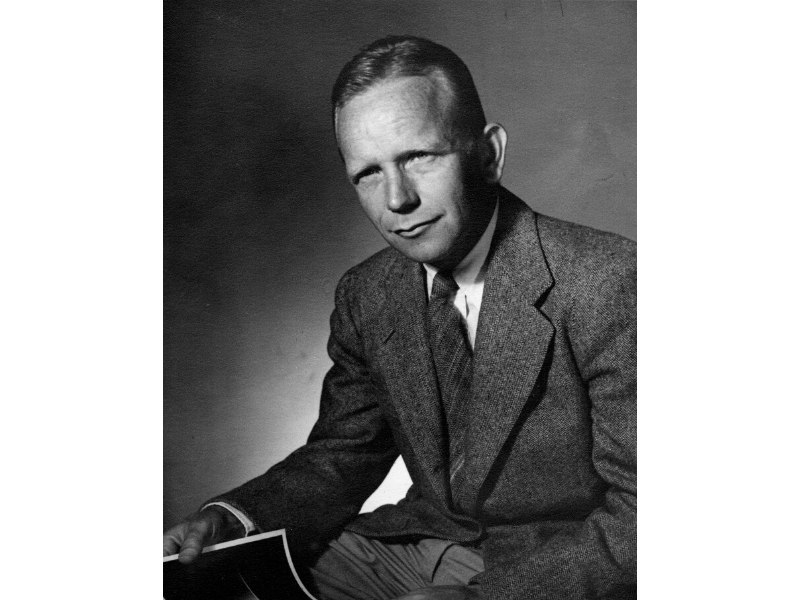 Bainbridge holding a photograph of the Trinity Test.

NBLA holds two oral histories conducted with Kenneth Bainbridge in 1977. The following quotations are taken from the first of those two interviews. At the beginning of the Second World War, Bainbridge was recruited to work on what became the Radiation Laboratory at MIT. From 1943 to 1945 Bainbridge worked at Los Alamos, and one of his responsibilities was overseeing the Trinity Test:

“I had been working on getting a site and preparing for the test really starting in sometime that spring of ‘44, I guess around March ‘44. We’d located the site finally by September of ‘44, and then it was time to build a camp there, and build roads, and prepare the groundwork, and put in the wires and everything else for the test.”

Bainbridge was present at the test, after which he is alleged to have said to J. Robert Oppenheimer and others, “Now we are all sons of bitches.”

“You had lead “houses,” excavated land and put in lead bricks, thick enough to stand your prediction of what the radiation values would be, and the equipment put in there and everything was sealed over. Well, after the test you couldn’t look at these things for months because the ground was so radioactive but finally, when you got there and opened these things up — this worries me about shelters like subways, if people in a nuclear war should be in some place like that — the hot gases loaded with radioactivity just went in through the tiniest crack, got in there and cooled, left the radioactivity, so everything inside was cooked with radioactivity. And the same thing would happen in any shelter or any hardened missile site, or anything else. If the stuff can get in, it will get in. Well, that wasn’t a very pleasant note.”

Bainbridge’s oral history can be read in its entirety here: https://www.aip.org/history-programs/niels-bohr-library/oral-histories/31507-1

His report to the government following the Trinity Test has been declassified and is also now available to read online:  https://www.osti.gov/opennet/manhattan-project-history/publications/LANLTrinity.pdf 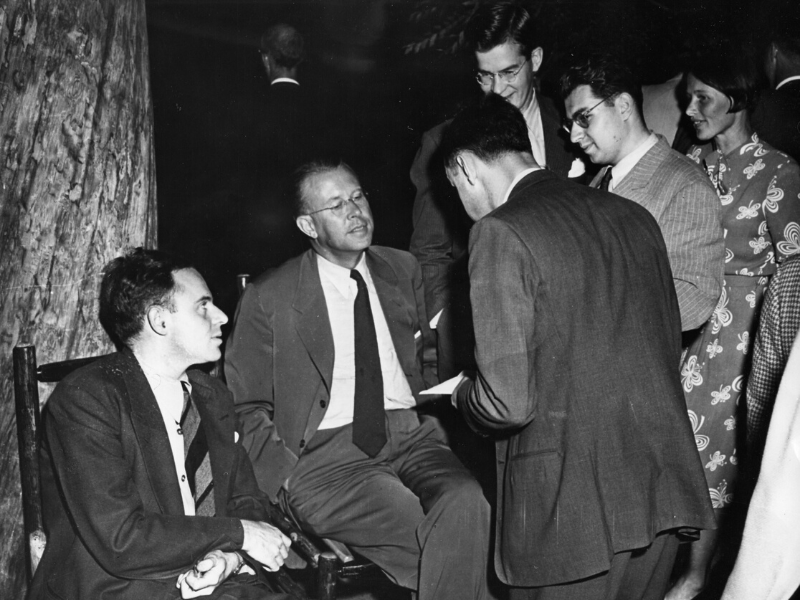 Scientists at the Los Alamos National Laboratory conversing during a party during the summer of 1945. Philip Morrison is at the far left.

Multiple oral history interviews with Philip Morrison have been deposited at the NBLA, but the following excerpts are taken from a 2002 interview. During the Manhattan Project, Morrison worked in the Weapons Physics Division at Los Alamos on issues of critical assembly - that is how the nuclear material (and how much of it) could be brought together just so to cause the explosion.

“We all knew it was very strange and scary, and we began, when I went to Los Alamos, I had this clear task of making critical assemblies with small amounts of material, which gradually got denser and denser and smaller and smaller. And they were dangerous and hard to do but worth doing.”

In contrast to Bainbridge’s, Morrison’s oral history contains more on-the-ground details of how the test came together.

Interviewer: And so my question was, that beyond these technical descriptions, do you remember having any other thoughts at that time over what you had just witnessed? Was this overwhelming and —?

Morrison: It was overwhelming. I knew it would be terrible. But you know we were committed by that time.

Morrison: And the thing that sticks in my mind still, not what I wrote, it was several times greater heat on the face than the rising sun, always emphasizing not the sight so much as the heat on the skin, a sign the sun had risen twice.

Norris: And you were ten miles away.

The 2002 interview can be read in its entirety here: https://www.aip.org/history-programs/niels-bohr-library/oral-histories/28014-1.

The Day After Trinity, A Documentary with Video Footage and Interviews

The NBLA holds the 16mm film and videocassette of The Day After Trinity: J. Robert Oppenheimer and the Atomic Bomb, a documentary by Jon Else in the audiovisual collection. The AIP is credited for help given in the making of the documentary at the end of the film. A full version is available to watch on YouTube.

Interviewer: “Dr. Oppenheimer could you tell us what your thoughts are about what our atomic policy should be?

[Oppenheimer had had his security clearance revoked in 1954 in the Second Red Scare.]

Interviewer: “What your thoughts are [sic] about the proposal of Senator Robert Kennedy that President Johnson initiate talks with a view to halt the spread of nuclear weapons?

Oppenheimer: “It’s about twenty years too late. It should have been done the day after Trinity.”

Cynthia C. Kelly, ed. The Manhattan Project: The Birth of the Atomic Bomb in the Words of its Creators, Eyewitnesses, and Historians. New York: Atomic Heritage Foundation, 2007. The NBLA holds this book but it is also available on Open Library for free 14 day checkout - https://archive.org/details/manhattanproject00kell