WASHINGTON, January 5, 2020 -- Due to long-term and systemic issues leading to the consistent exclusion of African Americans in physics and astronomy, a task force is recommending sweeping changes and calling for awareness into the number and experiences of African American students studying the fields.

In its report, “The Time Is Now: Systemic Changes to Increase African Americans with Bachelor’s Degrees in Physics and Astronomy,” the task force discusses the five factors it discovered as responsible for the success or failure of African American students in physics and astronomy: belonging, physics identity, academic support, personal support, and leadership and structures. The report was released on Jan. 5 at the 235th meeting of the American Astronomical Society in Honolulu, Hawaii.

“It was important for AIP to bring together experts from physics, astronomy and the social sciences to investigate and recommend solutions toward increasing the number of African American students in our field,” said Michael Moloney, chief executive officer of AIP. “AIP and its member societies are committed to promoting increased diversity, equity and inclusion in the physical sciences. I hope the recommendations in this task force report are taken seriously and enthusiastically implemented to achieve our goals.”

TEAM-UP’s two-year investigation included student and faculty surveys, in-person interviews with African American students, and site visits to high-performing physics departments in colleges and universities. The report is calling for a new way of thinking to solve this persistent problem, and it outlines research findings into each of the five factors with recommended changes to address issues within the factors.

Recognizing that the underlying norms, values and culture of the profession need to be addressed before lasting changes can occur, the report provides a detailed guide for faculty, departments and professional societies to understand and manage the necessary change processes. Some of the report’s highest priority recommendations concern change management.

According to the TEAM-UP report, “The persistent underrepresentation of African Americans in physics and astronomy is due to (1) the lack of a supportive environment for these students in many departments, and (2) the enormous financial challenges facing them and the programs that have consistently demonstrated the best practices in supporting their success. Solving these problems requires addressing systemic and cultural issues and creating a large-scale change management framework.”

While African American physics and astronomy students have the same drive, motivation, intellect and capability as students of other races and ethnicities, the task force found many students are choosing other degree fields that are more supportive and financially rewarding. The TEAM-UP task force wants to at least double the number of bachelor’s degrees in physics and astronomy awarded to African Americans by 2030 and calls on departments and professional societies, working with funding agencies, foundations and donors, to commit to achieving this goal.

“A systemic problem needs a systemic solution,” said task force co-chair Ed Bertschinger, physics professor at Massachusetts Institute of Technology. “The presence or absence of caring faculty members can make the difference between a student persisting or leaving. Department leaders choose the faculty and signal to them what’s important, as does the profession at large. The culture of physics and astronomy today affects discoveries that will or won’t be made by these scholars in the future.” 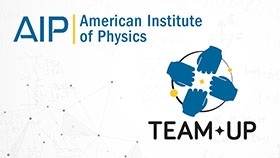 The report calls on the scientific community to foster a sense of belonging for African American students within physics and astronomy programs by creating environments that are welcoming and promote the feeling that students are valued through departmental practices, and faculty, student and peer interactions.

In addressing the financial burden for African American physics and astronomy students, the TEAM-UP report encourages connecting students with funding programs and help them find jobs that advance them academically during their undergraduate time. In addition, they want a consortium of physical science societies to raise a $50 million fund to support minority students in physics and astronomy who have unmet financial needs. Half of the endowment income would go to direct support of African American physics and astronomy students and half would go to support departments’ implementation of the TEAM-UP report’s recommendations, particularly those at historically black colleges and universities.

“HBCUs have long been known to be top producers of African American physics and astronomy majors while also being largely underfunded and underappreciated,” said TEAM-UP member Jedidah Isler, assistant professor at Dartmouth College. “Our goal in recommending the $50 million endowment is to create structural and systemic interventions that will support students and reward the institutions that have consistently produced some of our brightest minds. The problem is not with our students. It is with the systems they must endure to succeed.”

To sustain and improve recruitment and retention of African American physics and astronomy students, the report calls for academic and disciplinary leaders to prioritize creating environments, policies and structures that maximize African American student success. Department chairs should establish departmental norms and values of inclusion and belonging and actively partner with campus programs that support student belonging.

While the report focuses on the efforts of the scientific academic community, TEAM-UP also identifies areas where professional societies can raise the profile of the underrepresentation issue and assist in its correction. In addition to holding forums and initiating activities for societies, universities, departments and individual physicists and astronomers to understand and address these issues, professional groups should establish recognition, rewards and other incentives for efforts to improve the success of African American students in physics and astronomy.

The TEAM-UP task force is calling for action now and recommending that progress toward the recommendations in the report is monitored and publicly communicated every two to four years.

“The report [should] not sit on a shelf but be used to inform, inspire, and serve as a guide toward real and lasting change,” said TEAM-UP’s Executive Summary.