REPORT: Careers Outside of Academia are Richly Rewarding for PhD Physicists

10 years after graduating, many have found financially solid and meaningful employment in the private sector, according to a new report from the American Institute of Physics

WASHINGTON, D.C., June 30, 2015 -- When asked to picture someone with a PhD in physics, most people probably envision an academic in a lab -- and not, say, a CEO or a financial analyst. In reality, though, physicists aren't limiting themselves to the ivory tower. Out of necessity or choice, many leave academia for jobs in the private sector, pursuing careers that are traditionally not tracked in workforce surveys of the physics field.

Now a new report from the American Institute of Physics (AIP) Statistical Research Center (SRC), the first to systematically track PhD physicists who pursue non-academic careers, suggests that those entering the private sector around the turn of the millennium were doing quite well a decade later -- highlighting some of the hidden value of pursuing graduate work in physics.

According to the report, in 2011 more than three‐quarters of physicists working in the private sector earned in excess of $100,000 a decade after receiving their doctorates -- many enjoying salaries higher than their academic counterparts.

Private sector physicists also identified their jobs as intellectually stimulating, challenging and rewarding because they regularly worked with smart and interesting people from a wider range of backgrounds.

The new report, "Common Careers of Physicists in the Private Sector," is the first of its kind and calls attention to these forgotten physicists. Researchers tracked down 503 physicists working in the U.S. private sector 10 to 15 years after they received their doctoral degrees and asked them about the skills they used in their current jobs.

"This is the first systematic study of what physicists do in the private sector, and it's organized to help graduate students figure out where they want to go," said Roman Czujko, who is the lead author of the report. Czujko retired this month as SRC director. His colleague Rachel Ivie is the new director of SRC.

Grad School, and then What?

The world beyond academia presents students with a dizzying array of options, many with a less clear-cut path to success than a tenure-track professorship. In the AIP survey, the mid-career physicists who responded are divided into eight broad career types, based on their primary area of work, such as self-employment, finance, and various branches of industry. Each type of career is discussed in a separate chapter that highlights the skills and intellectual and interpersonal knowledge that physicists working in that discipline tend to use the most. 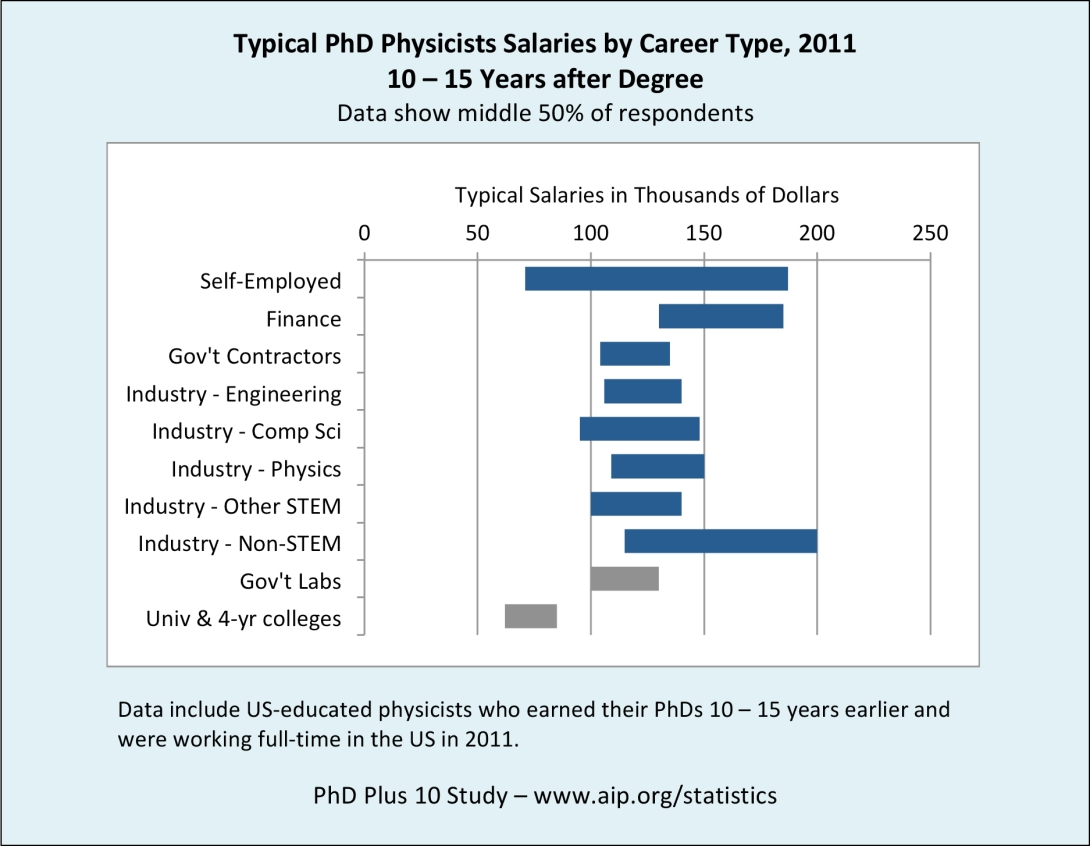 Two companion reports list verbatim what physicists in each field reported as the most rewarding aspects of their jobs, as well as their duties and responsibilities. Czujko hopes that these studies will help students to more effectively wade through the choices and perhaps match their own interests and abilities to a particular type of career.

The results make one thing clear: leaving academia doesn't necessarily mean that a physics doctorate goes to waste. Eighty-five percent of private sector physics PhDs were working in STEM fields, even if not specifically in physics. Seventy-one percent of respondents described their jobs as intellectually challenging, and 61 percent felt that their work was appropriate for someone with their degree. Likewise, a majority of private-sector physicists who pursued post-doctoral positions after earning their degree found those additional research opportunities worthwhile.

Across the survey’s eight career categories, though, some differences emerged. Unsurprisingly, physicists who pursued careers in industry -- whether in physics, engineering, or another STEM field -- reported that they frequently relied on their general scientific knowledge and their specific physics training. Those who went on to earn law or business degrees had less use for their specialized physics knowledge, but said they still relied on their science-based problem-solving abilities and math skills.

Self-employed physicists particularly valued the flexibility of their jobs, as well as the opportunity to feel more in control of their own success. Government contractors appreciated the variety of projects they were able to pursue, while those in finance enjoyed high salaries.

The survey also turned up a few somewhat unexpected results. "We were surprised to find that physicists in finance often work with other physicists," said Czujko. In addition, nearly 80 percent of physicists working in finance felt that their job was appropriate for someone with their degree -- higher than the overall private sector average. A closer look at the data reveals that their jobs in the financial sector often involved complex mathematical modeling and simulations, using the quantitative skills that their doctoral studies had helped them develop.

In addition, physicists who were self-employed didn't fit the stereotype of a solitary worker. Rather, they often lead their own businesses, working closely with both employees and clients. The companies they founded frequently provided products or services for science and technology industries.

There is certainly overlap between the career categories, and some skills, like teamwork, were commonly used across the board. Nevertheless, the report highlights differences in skills and values between fields that might help new physicists decide where they would best fit in. Above all, it provides a perspective often missing from classrooms: that a PhD in physics can be a springboard to a wide variety of fulfilling careers outside academia.

The full report can be viewed online at: http://www.aip.org/statistics/phd-plus-10

ABOUT THE STATISTICAL RESEARCH CENTER (SRC)

ABOUT THE AMERICAN INSTITUTE OF PHYSICS (AIP)

The American Institute of Physics is an organization of 10 physical science societies, representing more than 120,000 scientists, engineers, and educators. AIP delivers valuable services and expertise in education and student programs, science communications, government relations, career services for science and engineering professionals, statistical research in physics employment and education, industrial outreach and the history of physics and allied fields. AIP is home to Society of Physics Students and the Niels Bohr Library and Archives, and it owns AIP Publishing LLC, a scholarly publisher in the physical and related sciences. More information: http://www.aip.org