At a House Science Committee hearing held last week, members expressed bipartisan support for the goal of reducing regulatory burdens experienced by federally funded university researchers. They asked witnesses to explain how actions such as the creation of a new Research Policy Board could help achieve that goal.

On Sept. 29, the Research and Technology Subcommittee of the House Science Committee held a hearing to discuss recommendations made in recent studies on ways to streamline federal research regulations while ensuring adequate oversight of taxpayer funds. In particular, the National Academies of Sciences, Engineering, and Medicine issued a report on the subject in June, and the Government Accountability Office followed suit by releasing a report with a similar focus in July. Both studies were requested by Congress.

The National Academies study is sweeping in scope, proposing a revamped overarching regulatory framework as well providing numerous specific recommendations (see FYI #80). The GAO study is much narrower in scope, focusing on assessing progress the Office of Management and Budget and federal agencies have made to date in streamlining administrative requirements for university research grants. The GAO study concludes that although OMB and research agencies have made progress in areas such as standardizing requirements across agencies and making greater use of preliminary proposals, further streamlining opportunities remain.

The heads of the two studies—University of Texas at Austin President Emeritus Larry Faulkner and GAO’s Director of Natural Resources and Environment John Neumann, respectively—testified at the hearing. The committee also heard from Jim Luther, Associate Vice President for Finance and Compliance at Duke University, and Ángel Cabrera, president of George Mason University.

The last time the House Science Committee publicly examined research regulations was at a June 2014 hearing held shortly after the National Science Board issued a report on reducing the administrative workload of federally funded researchers.

“How can we cut the red tape to optimize our nation’s investment in scientific research?” asked Subcommittee Chairwoman Barbara Comstock (R-VA) at the outset of the hearing, citing surveys showing that researchers spend on average 42 percent of their time on administrative duties as evidence of excessive regulatory burdens.

Full committee Chairman Lamar Smith (R-TX) likewise framed the issue in terms of cutting red tape, although he went a step further by implying that burdensome research regulations are part of a broader pattern of regulatory overreach by the current administration. Smith went on to express his support for “common sense” reforms, such as implementing a standardized format for providing biographical information and reporting research progress across federal agencies.

Subcommittee Ranking Member Daniel Lipinski (D-IL) also referenced the 42 percent time-use figure, stating that although the number has been “challenged,” there is nevertheless consensus that current regulations are taking up too much of researchers’ time:

I think we all agree with the basic premise of this hearing and all of the related reports – too much valuable time of our researchers is wasted on excessive compliance with excessive regulations.

The oft-cited 42 percent figure comes from two surveys conducted by the Federal Demonstration Partnership (FDP), an association of federal agencies and academic research institutions focused on identifying ways to streamline research regulations. Some have noted that this number perhaps overstates the amount of time that researchers spend on administrative tasks because of the way the surveys define what constitutes “active research.” (Details on both surveys are available in FDP’s report summarizing the 2012 survey.) 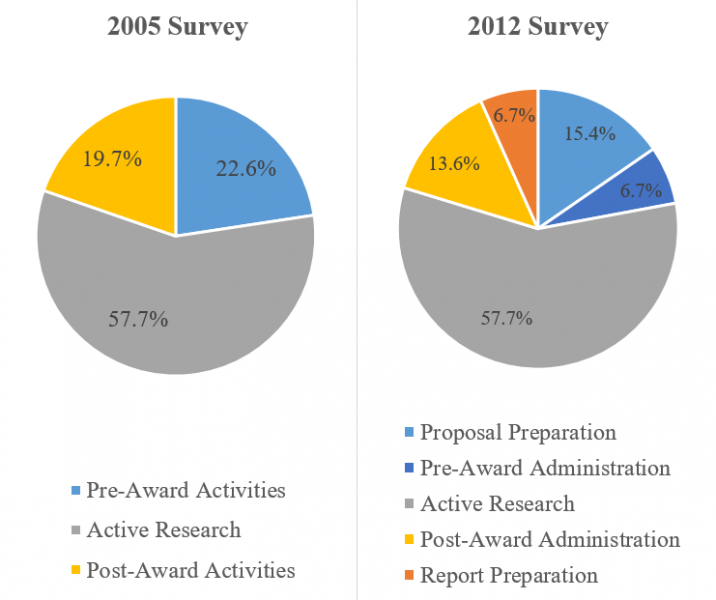 University witnesses support creation of a Research Policy Board

Both Comstock and Lipinski used their opening statements to highlight bipartisan bills they have introduced that would create new organizational structures for reviewing research regulations and soliciting stakeholder input.

Comstock’s “Research and Development Efficiency Act,” which the House passed in May 2015, would create an interagency working group charged with assessing research regulations and recommending reforms on an ongoing basis. Lipinski’s “University Regulation Streamlining and Harmonization Act,” introduced in June, would create a public-private Research Policy Board (RPB) that would serve as an advisory committee to the Office of Management and Budget on all matters relating to research regulation.

Lipinski referred to the RPB provision as the most important part of his bill. Notably, the National Academies report recommended that Congress create such an organization, although the structure of the board created by Lipinski’s bill differs from that proposed in the report.

Cabrera spoke favorably of both bills in his written testimony:

Your bills will allow for broader discussion of that monster that lurks behind every rule–the law of unintended consequences. By providing a pause button, or the ability to raise a Red Flag, a means for redress, and revisiting existing rules, you have done a tremendous service to the research enterprise and the nation’s future innovation.

Faulkner and Luther took a step further, specifically advocating in favor of establishing a RPB throughout their testimony. Luther referred to the RPB as the “enabler for everything else,” asserting that existing coordination bodies such as the FDP and the Research Business Models interagency working group are inadequate. Furthermore, Luther stated that productive interactions between university stakeholders and those developing the regulations have “historically been heavily dependent on relationships with individual agency employees.”

As an example of an area that would benefit greatly from the existence of a RPB, Luther cited the implementation of the 2013 White House Office of Science and Technology Policy directive on increasing public access to federally funded research. “I think the rollout of that is going to be ripe for something like a Research Policy Board,” he said.

Faulkner argued that there is a desperate need for additional stakeholder coordination and that this need will only increase as science advances and inevitably raises new issues requiring new regulations. He also stressed that having the RPB serve as a forum for anticipating and discussing issues before they reach the regulatory implementation stage is “the key to maintaining a sane and functional overall regulatory burden.”

Asked whether the National Academies study committee was concerned the RPB could become “just another layer of bureaucracy,” Faulkner replied that the board is envisioned solely as a coordination body and a forum for discussing emerging issues, and thus would not add a layer of approval to the existing process.

Falkner noted that the legislation which created agency IGs instructs them to “promote economy, efficiency, and effectiveness” as well as “prevent and detect waste, fraud, and abuse.” Falkner suggested that the IGs for federal research agencies have placed too much emphasis on the latter mission given that most research institutions are already audited annually and that “the history of inspector general engagement with the research enterprise is not one that has yielded large trophies in terms of recovered funds.”

He also argued that research institutions have suffered as a result of disagreements between agencies and their IGs with respect to interpretation of certain grant management policies: “The dispute[s], which [are] essentially between two federal actors, will get fought out on a battleground in an institution that then has to spend large amounts of money to go through the process of the audit that’s being used to fight the battle.” The National Academies study panel recommends that Congress require agency IGs to resolve disagreements over interpretation of agency policies prior to formally auditing research institutions.

One example of such a dispute, alluded to by Lipinski at the hearing, is that the National Science Foundation’s IG has repeatedly questioned certain senior salary expenses charged to grants. The IG has argued that the charges in question violated a NSF policy that limits the amount of salary compensation certain personnel can charge to grants to two months. NSF has disagreed with the IG’s interpretation and has not required the institutions in question to repay the funds. NSF’s responses to individual IG audits are posted here.

The IGs for both NSF and the National Institutes of Health issued a response to the National Academies report recommendations pertaining to agency IGs. In it, they defend the practice of having agency-IG disagreements play out over multiple audits:

Continuing to report the same finding in multiple audits keeps agency stakeholders, such as agency management, Congress, and members of the affected recipient community, constantly apprised of the differences of opinion between OIGs and agencies, and, appropriately, provides an opportunity for non-agency stakeholders to offer their input on agency policies and priorities.