Today, the Senate Commerce Committee approved the "American Innovation and Competitiveness Act" after amending it to authorize a four percent funding increase for NSF and NIST. However, a push to identify offsets for these increases may delay or derail passage of the bill by the Senate.

During a markup session today, the Senate Commerce, Science, and Transportation Committee adopted a set of 14 amendments (listed here) to the “American Innovation and Competitiveness Act” (AICA)—its successor to the 2010 America COMPETES Act—before approving the overall bill.

When introduced last week, the bill did not contain funding-level authorizations for the National Science Foundation and the National Institute of Standards and Technology. The substitute amendment adopted today adds these figures, authorizing $7.51 billion in fiscal year 2017 and $7.81 billion in fiscal year 2018 for NSF and $974 million in FY17 and $1.013 billion in FY18 for NIST. The other adopted amendments made various small changes to the bill, such as adding a provision encouraging the Department of Commerce to create a grant program for expanding STEM apprenticeship programs and another creating a federal coordination body for sustainable chemistry research.

The authorizations for FY17 match the amounts the Senate Appropriations Committee approved for NSF and NIST in April. The FY18 authorizations are four percent above the Senate’s proposed FY17 funding levels. The charts below display the funding amounts authorized by selected previous COMPETES laws and bills alongside the amounts ultimately appropriated. 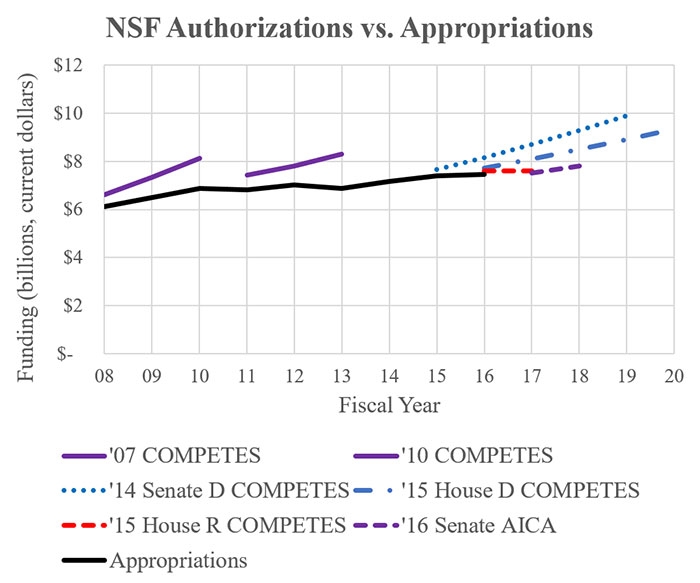 Comparison of authorized versus appropriated funds for NSF. Funds from the American Recovery and Reinvestment Act of 2009 are excluded. 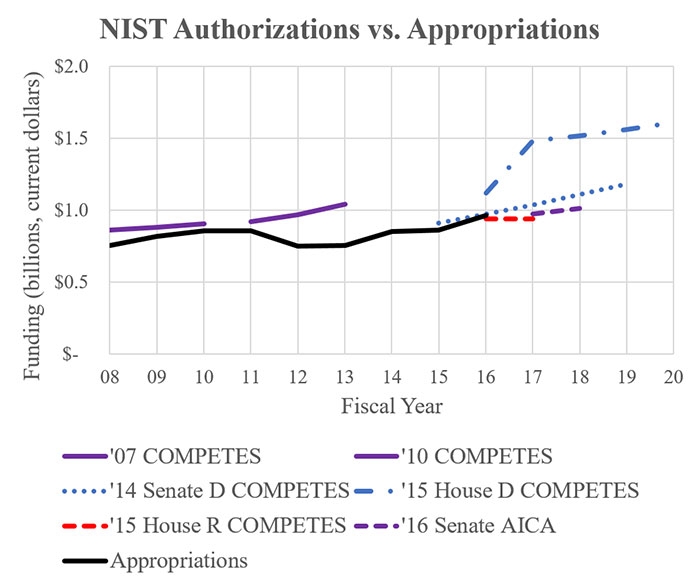 Comparison of authorized versus appropriated funds for NIST. Funds from the American Recovery and Reinvestment Act of 2009 are excluded.

The lead cosponsors of the bill, Sens. Cory Gardner (R-CO) and Gary Peters (D-MI), both made statements at the markup. Gardner began his statement by quoting from testimony given by former National Science Board Co-Chair Kelvin Droegemeier at a hearing convened in the lead up to the bill’s introduction: “[This committee has] made science bipartisan again, countering rhetoric that has at times made the research community feel under siege.”

Gardner then asserted that passing the bill is important for keeping the U.S. competitive against countries that are increasing their investments in research, concluding his remarks with a nod to the National Academies’ 2007 report Rising Above the Gathering Storm which spurred the initial COMPETES Acts:

My hope is that this bill helps reset how Congress approaches science policy. As countries like China and India pour significantly more money into basic research, graduate ever higher numbers of students in STEM fields, and market increasingly competitive products backed by those investments, we have to confront the challenges with positive, forward-looking legislation—like the American Innovation and Competitiveness Act. …

Recommitting the United States to investments in basic research and development is important for growing the economy and critical to keeping the United States as the world leader in this space. Just last week, the New York Times reported that China has eclipsed the United States for the first time in the TOP500 list for total number of supercomputers. So the idea that other nations are catching up to us in science and technology isn’t something in the distant future, it’s happening now, and legislation like this will help ensure that we indeed rise above the gathering storm.

I’m particularly pleased that the committee will authorize a four percent increase for scientific research. This is a very modest investment in science, and is certainly a down payment on American competitiveness going forward. There’s no question that investment in basic research and basic science is investment in the seed corn of our economy, and we need to step up and make those investments to make sure that the United States continues to be the most competitive country in the world when it comes to new innovation.

Sen. Deb Fischer (R-NE) cast the sole vote against the bill, explaining that her opposition stems from the committee not identifying a means to pay for the authorized spending increases:

I am very concerned that the bill contains substantial increases in the authorization of appropriations for NSF and NIST. Taken together, the bill contains a total increase in authorized appropriations of nearly $400 million from fiscal year 2016 enacted levels, and it does not contain offsets for that spending. I don’t doubt that this bill contains many positive provisions … but good things do not mitigate the need to offset our spending. … If we do not plan how to offset the spending now, the likelihood that it will be done on the floor is minimal.

Committee Chairman Sen. John Thune (R-SD) acknowledged concerns about the lack of an offset in his opening statement, but still expressed support for the bill, remarking, “While the bill may still need some work before it can pass the full Senate, including ways to ensure the authorization increase that will likely be adopted is feasible, I commend Senators Gardner and Peters for their efforts on this bill and am glad to be a cosponsor of the measure.”

Fischer’s opposition means that the Senate may have trouble passing the bill by unanimous consent, a process through which the chamber can quickly pass bills if no senators object. If the Senate cannot pass the bill by this route, it must either secure a slot for it in a crowded legislative queue for a full Senate vote or attach it to another piece of legislation.