At a recent hearing, House Science Committee members stressed the increasing importance of computing competency in the U.S. workforce and discussed ways to increase students’ access to programs that provide these and other STEM skills at all levels of education.

On July 26, the Research and Technology Subcommittee of the House Science Committee held a hearing to explore the current state of STEM and computer science education in the U.S, with a focus on preparing a skilled next-generation workforce.

In her opening statement, Subcommittee Chair Barbara Comstock (R-VA) said that “through the combination of public and private sector investments, we can help inspire our students to get into [STEM] programs early, and stay.” She focused on the growing demand for STEM workers and the shortage of cybersecurity professionals in her home state as problems that more STEM education and training could help to solve.

Subcommittee Ranking Member Daniel Lipinski (D-IL) added that even as a record number of computer science bachelor’s degrees have been awarded in recent years, demand for computing and programming expertise has “skyrocketed.” He concluded the nation is “obviously still not producing enough skilled computer scientists.”

Science Committee Chair Lamar Smith (R-TX) — who sponsored the 2015 STEM Education Act that expanded the federal government’s definition of STEM to explicitly include computer science — lamented in his opening statement that international testing shows the U.S. falling behind other nations in STEM education. He stressed that, in addition to supporting federal STEM programs,

We need to learn what is taking place outside of the federal government, so we can be sure we are not spending taxpayer dollars on duplicative programs.

The recently enacted Every Student Succeeds Act (ESSA) – a major K–12 education reauthorization law – established grant programs that states can use to fund a variety of STEM education initiatives. It emphasizes the importance of computer science, describing it as a core academic subject that contributes to a “well-rounded education.”

Two witnesses testifying at the hearing noted the importance of ESSA to computer science and STEM education.

Pat Yongpradit, chief academic officer at Code.org, said ESSA has helped “increase the priority of computer science at the state level.” James Brown, executive director of the STEM Education Coalition, explained that since its passage 25 states have advanced ESSA state accountability plans, and 17 of those states have added science as a subject they plan to target with strategies for educational improvement.

However, Brown warned that the Trump administration’s and House’s proposals for STEM education funding in fiscal year 2018 send “mixed signals” about current and future support for these programs.

The administration proposes to zero out funding for two major Department of Education grant programs that can fund STEM initiatives under ESSA: Student Support and Academic Enrichment Grants and the 21st Century Community Learning Centers program. The House appropriations bill for the department would provide a $100 million, 25 percent increase for the enrichment grants but a $192 million, 16 percent decrease for the centers. The Senate has not yet released its appropriations bill for the department.

Brown stressed the increasing importance of computing in “middle-skilled jobs,” or jobs that typically require less than a bachelor’s degree. He said such jobs are misunderstood as not STEM-related and that there should be greater emphasis on making sure “we’re not just focusing resources on the future rocket scientist, the people that sort of fit the description of who you’d expect to see when you talk about a STEM job.”

Yongpradit noted there are about 500,000 vacant computing positions in America, a figure that includes jobs requiring a four-year degree as well as middle-skilled jobs. Reflecting on this statistic, Rep. Roger Marshall (R-KS) said it shows that “we don’t have a job problem, we have a job skills problem in this country.” He then asked what more institutions can do to remedy this skills gap.

Brown observed that many companies are doing their own training in-house, which he said is “probably not the ideal solution” since it bypasses the education system entirely. He also suggested that community colleges could play a larger role in addressing the skills gap as they “have more flexibility than some other institutions” to implement job retraining programs.

The House has recently taken action on legislation related to these subjects. Last month, it passed a bill supporting middle-skilled STEM jobs as part of a reauthorization of career and technical education programs. The Senate has not acted on the bill since then.

Throughout the hearing, the witnesses offered ideas on how to improve accessibility to STEM and computer science education programs.

Brown asserted that “high-quality teachers” and “high-quality experiences” have the largest impact on students’ success in STEM. Scholarships, he said, are less effective than many people believe since “the financial incentives alone … will not, necessarily, overcome [students’] lack of preparation for success in another STEM-oriented career.”

Dee Mooney, the executive director at Micron Technology Foundation, explained how her local university is developing a program through which computer science and engineering students can also earn a teaching certificate, simplifying the transition into teaching careers.

Paul Alivisatos, former director of Lawrence Berkeley National Laboratory and provost at the University of California, Berkeley, discussed several initiatives UC Berkeley has introduced to increase the number and diversity of students in STEM, including a course on the foundations of data science available to students of any major. The key, Alivisatos emphasized, is getting students “out of a lecture hall and into a research and discovery team.” He also noted that the new data science course is the fastest growing program in the history of Berkeley. 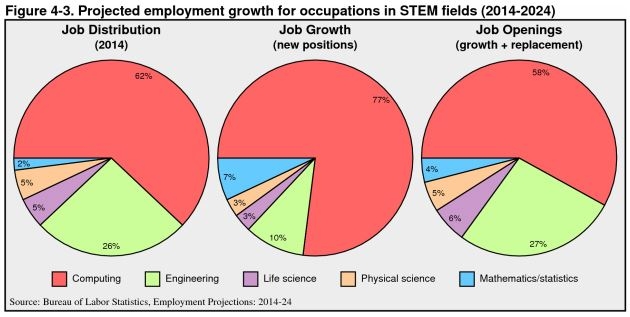 A chart used by Paul Alivisatos in his testimony shows that the Bureau of Labor Statistics projections for 2014-2024 predict that 77 percent of all new STEM jobs will be computing related.

Committee members also addressed the continuing gender inequality in the STEM and computer science fields. Full Committee Ranking Member Eddie Bernice Johnson (D-TX) explained that while the number of bachelor’s degrees in computer science has “exploded” over the last several years, only 18 percent were awarded to women, the same fraction as in the 1970s. She noted,

Structural and social barriers are preventing us from fully engaging students of both genders, students of all ethnicities, and students from all backgrounds as we attempt to increase participation in computer science.

The cause of advancing women in STEM has garnered bipartisan support in Congress, with two bills, including the INSPIRE Women Act sponsored by Comstock, signed into law earlier this year. NASA recently detailed its existing programs for K-12 female STEM students in response to the INSPIRE Women Act. Rep. Jacky Rosen (D-NV) also noted that she has introduced two additional bills that aim to increase female participation in the STEM and computer science fields.

Rep. Bill Foster (D-IL), who is not on the subcommittee but was in attendance, asked more broadly how the education system can train students for computer science careers five years from now given all of the “fast-moving, technical changes in our economy.” Yongpradit responded that the key is to focus on the “core, foundational concepts” in the computing field so that students “who are in kindergarten now … aren’t ill-prepared when they get to the age of 22.”