President Trump has nominated Rep. Jim Bridenstine (R-OK) to be NASA administrator. The former Navy aviator and three-term congressman has recently promoted an ambitious vision for space policy reform that would shift NASA’s focus away from scientific research in favor of human space exploration and the development of space-based infrastructure. 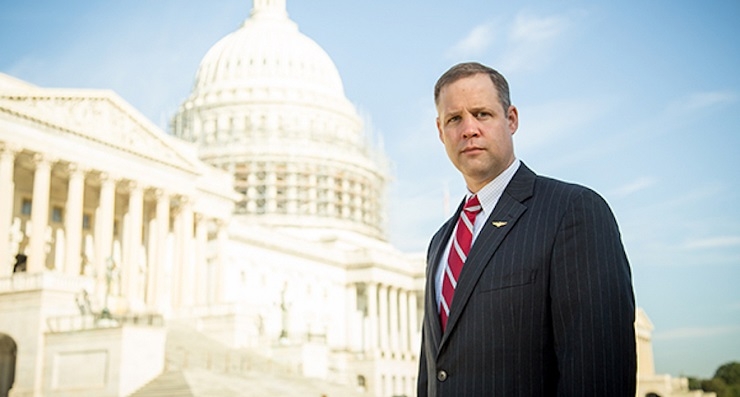 NASA announced on Sept. 1 that President Trump had selected Rep. Jim Bridenstine (R-OK) to be the agency’s next administrator. The pick was long anticipated, as Bridenstine had been rumored to be a top choice for the job beginning shortly after Trump’s election. Trump’s nomination was officially received by the Senate on Sept. 5, and it will now go to the Commerce, Science, and Transportation Committee for consideration.

There is a good chance that Bridenstine’s confirmation hearing will address questions of space policy in some detail, as the congressman has been highly active in the area. However, one area where his intentions remain opaque is toward NASA’s almost $6 billion portfolio for scientific research. While Bridenstine has energetically supported improvements to the U.S.’s space-based infrastructure for weather research and forecasting, he has also introduced legislation that would remove scientific research as one of NASA’s primary objectives.

During his four-and-a-half years in Congress, Bridenstine has taken a consistently strong interest in space policy, culminating with his introduction of the “American Space Renaissance Act” last year. At the time, he described the bill as a repository of ideas for reforming space policy rather than as an active piece of legislation. Nonetheless, it reveals a coherent, ambitious, multi-agency agenda for advancing U.S. interests in space and expanding the frontiers of human space exploration.

Bridenstine’s agenda centers around the development of a space-based “architecture” that prioritizes national security needs. His bill therefore attends closely to the development of capabilities for navigation, communications, reconnaissance, and weather forecasting, and it addresses the vulnerability of space-based assets to orbiting debris and attacks by foreign adversaries. The bill also aims to promote commercial space innovation as a critical path to securing the U.S.’s place as “the preeminent spacefaring nation.”

Concerning NASA, the bill states that the agency has lacked a “clear purpose or mission,” owing to a “lack of consistency in leadership along with budget uncertainty in out-years.” It declares,

NASA should undergo reorganization, altering its mission with a clearer focus, ridding itself of extraneous responsibilities handled elsewhere within the Federal Government or private industry, and standardizing activities across the whole of NASA.

In the bill, Bridenstine proposes that NASA amend its institutional objectives, which would include eliminating current objectives for the “expansion of human knowledge of the Earth and of phenomena in the atmosphere and space” and the conduct of studies on “the utilization of aeronautical and space activities for peaceful and scientific purposes.” It would also set three new objectives that would form the core of a new “pioneering doctrine”:

(1) The expansion of the human sphere of influence throughout the Solar System.

(2) To be among those who first arrive at a destination in space and to open it for subsequent use and development by others.

(3) To create and prepare infrastructure precursors in support of the future use and development of space by others.

Notably, while Bridenstine is a supporter of sending humans to Mars, he has also advocated the development of new activities on the moon and in the space between the moon’s orbit and low-Earth orbit.

Bridenstine’s bill also contains provisions that would establish a special commission to select NASA’s administrator for five-year terms and allow the agency to receive multi-year appropriations.

Outside of the “American Space Renaissance Act,” Bridenstine has adopted a more piecemeal approach to space policy that is still informed by his larger vision.

One of Bridenstine’s signature issues has been to promote federal agencies’ adoption of commercial space services. He successfully pressed the National Oceanic and Atmospheric Administration and the Defense Department to initiate pilot programs for the purchase of commercial satellite data. He argues that, while there are legitimate reasons for agencies to acquire their own data, such as ensuring its quality and security, in many cases purchasing data from commercial providers could result in significant cost savings.

Bridenstine has also paid a great deal of attention to the nation’s weather forecasting capabilities. He was one of the key players behind the Weather Research and Forecasting Innovation Act, which was enacted in April after years of legislative work. As chair of the House Science Committee’s Environment Subcommittee from 2015 to 2016, he held a series of hearings on the progress of NOAA’s troubled, next-generation geostationary and polar-orbiting weather satellites. While keeping a close watch on the programs’ development, he has maintained strong support for them.

Bridenstine was first elected to Congress in 2012. He is a member of the staunchly conservative Freedom Caucus, and in the 2016 presidential election he supported Sen. Ted Cruz (R-TX) before becoming an unwavering Trump supporter.

Bridenstine’s views on space policy, though, do not appear to be deeply linked to his politics. While he is a proponent of promoting commercial alternatives to federal space activities, he supports a strong government role in particular areas. In one hearing, for instance, he insisted, “I am not in any way suggesting the privatization of NOAA … or the National Weather Service.”

He also has not openly shared in the enthusiasm for subjects such as astronomy and planetary science expressed by similarly conservative House colleagues Reps. Lamar Smith (R-TX) and John Culberson (R-TX). Both Smith and Culberson have, though, endorsed Bridenstine as a sound choice for NASA administrator.

A large part of Bridenstine’s thinking appears to derive from his background in military aviation. He joined the Navy in 1998, after receiving his bachelor’s degree from Rice University with majors in business administration, economics, and psychology. He remained on active duty through 2007 and flew combat missions in Iraq and Afghanistan. In hearings, he has occasionally referred to this experience in discussing the importance of maintaining robust satellite-based capabilities.

Following his active duty, Bridenstine worked for a short time at defense contractor Wyle Laboratories and received a master’s degree in business administration from Cornell University. He was executive director of the Tulsa Air and Space Museum from 2008 to 2010. He has also continued to fly missions with the Navy Reserve and the Oklahoma Air National Guard.

Although Bridenstine is deeply engaged with space policy, his nomination is likely to draw at least some resistance. One point certain to arise is that he has criticized the consensus conclusions of climate scientists and the amount of money that the federal government invests in their research.

In a 2013 floor speech, Bridenstine asserted, “Global temperatures stopped rising 10 years ago. Global temperature changes, when they exist, correlate with sun output and ocean cycles.” Claiming that the federal government spent “30 times as much money” on global warming research as on weather forecasting and warning, he accused President Obama of a “gross misallocation” of resources.

However, so far, the main point being made against him by senators is simply that he is a politician poised to lead an agency that many lawmakers would like to keep outside of partisan politics.

Sen. Bill Nelson (D-FL), a former astronaut and the ranking member of the Commerce, Science, and Transportation Committee, responded to Bridenstine’s nomination, saying, “The head of NASA ought to be a space professional, not a politician.” Sen. Marco Rubio (R-FL), expressed a concern that partisan politics will slow the nomination and introduce unneeded controversy at a time when NASA is “at a critical juncture in its history.”

While the bipartisan disappointment from Florida’s senators suggests Bridenstine’s confirmation may hit some turbulence, he will find strong support from others in the chamber. In particular, Cruz, who chairs the Space Subcommittee of the Commerce, Science, and Transportation Committee, welcomed the nomination, calling Bridenstine “a strong, principled, and effective leader,” as well as a “close ally” and a “dear friend.”