At a hearing convened to discuss future directions for NASA, leaders of the House Science Committee stressed the need for continuity between administrations. Democratic members highlighted the agency’s earth science activities, which could be affected by a “rebalancing” the chairman intends to pursue. 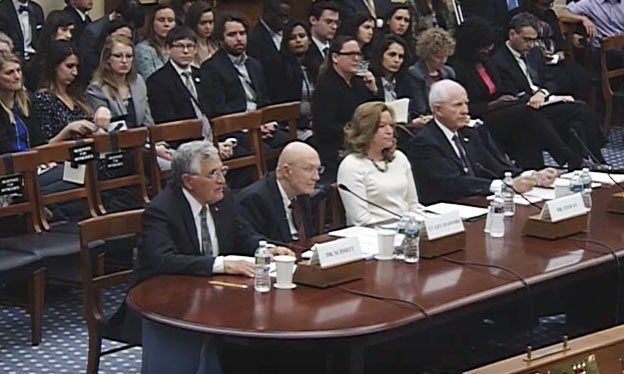 Testifying before the committee were (from left) Harrison Schmitt, a geologist-astronaut and the only scientist to walk on the moon; Lt. Gen. Thomas Stafford, an astronaut on four missions including Apollo 10 and the Apollo-Soyuz Test Project; Ellen Stofan, NASA’s chief scientist from 2013 to the end of the Obama administration; and Thomas Young, a past head of the Goddard Space Flight Center and Martin Marietta.

On Feb. 16, the House Science, Space, and Technology Committee held its first NASA-focused hearing of the 115th Congress. Its stated purpose was to “review NASA’s past portfolio of missions, evaluate existing exploration programs, and provide a venue for consideration of potential bold and innovative missions going forward.”

Maintaining “constancy of purpose” at NASA as well as “rebalancing” its portfolio to enable a more vigorous program of space exploration are on the agenda of the committee’s Republican members for the new Congress. These terms were clearly on members’ minds as they probed the perennial subject of what destinations NASA should aim for, and as Democratic members drew attention to the agency’s earth science activities, which could be especially impacted by a shift in priorities.

Committee Chairman Lamar Smith (R-TX) used his opening statement to note the opportunities inherent in administration changes as well as Congress’s efforts to maintain stability through the transition. He pointed to the “NASA Transition Authorization Act” and explained its intent as follows:

First, it reiterates the importance of maintaining NASA’s continuity of purpose. The National Research Council’s ‘Pathways’ report, the Aerospace Safety Advisory Panel’s recent reports, and numerous outside advisory groups and associations have all highlighted the significance of continuity. Without it, our space program will be left adrift and rudderless. Second, the bill allows the president to introduce a fiscal year 2018 budget request that reflects his priorities.

The Senate passed a version of the legislation in the waning days of the previous Congress, but the House did not take it up before recessing for the year. The day after the hearing, the Senate passed an updated version by unanimous consent. The bill sets authorized funding levels for fiscal year 2017 and provides policy guidance for each of NASA’s main subunits: the Human Exploration/Operations, Science, Space Technology, and Aeronautics Mission Directorates.

It is clear that the challenge ahead of us is to provide NASA with stability and sustainability so that it can carry out the challenging tasks that our nation has given it. … We must be careful not to undo NASA’s progress by changing direction with each new administration. Simply put, we must commit to staying the course.

However, some members expressed a willingness to entertain significant policy shifts. In his opening statement, Space Subcommittee Chair Brian Babin (R-TX) said that Congress should consider “bold new directions” for the space program and offered a series of pointed rhetorical questions that together outlined the contours of major decisions Congress and NASA may face in the coming years.

Alongside fellow committee members Reps. Bill Posey (R-FL) and Jim Bridenstine (R-OK), Babin is cosponsor of a bill introduced this February that directs NASA to develop a plan to return to the moon. Bridenstine, who is in the running to be the next NASA administrator, made an appearance at the hearing. He indicated his preference for returning to the moon while maintaining Mars as a “horizon goal,” and pointed to China’s ability to threaten U.S. geostationary satellites from above as a concerning development that demonstrates the geopolitical importance of the region of space between the Earth and the moon.

Earth science in the spotlight

Several Democratic committee members made a point of highlighting NASA’s earth science activities, likely because they predict that the “rebalancing” the Republican members plan to pursue may occur at the expense of the earth science program. Whether earth science should be considered a core priority of NASA has been a topic of debate in recent years among members of the House and Senate science committees.

Both Johnson and Bera lauded NASA’s earth science program in their opening statements, and Reps. Susan Bonamici (D-OR) and Don Beyer (D-VA) asked Stofan to articulate the value of NASA’s involvement in the discipline.

Bonamici asked for examples of how NASA-supported earth science has benefited the economy. In response, Stofan cited the GRACE spacecraft’s monitoring of groundwater depletion in California and a NASA-supported app that helps farmers monitor crop health and conserve water. She then remarked,

Across the board, we’ve been taking NASA earth science data, which has historically been for the scientific community to do science stuff with, and turning it into information that helps people in their everyday lives.

Beyer asked what would happen if NASA’s earth science budget were eliminated, which caused Chairman Smith to interject that the “rebalancing” would not entail eliminating the program. Stofan observed that the agency’s budget for earth science is currently slightly less than it was in 2000 after adjusting for inflation. She also described the support that NASA provides to other agencies, such as building the GOES-R weather satellite for the National Oceanic and Atmospheric Administration and the Landsat satellite for the U.S. Geological Survey.

The subject of NASA’s support of other agencies came up again when Rep. Randy Weber (R-TX) asked former geologist-astronaut Harrison Schmitt to elaborate on an earlier remark he had made on the need for NASA to resist “political diversity.” Schmitt replied,

Many of the things that NASA does are really within the purview of other agencies, and I think that ought to be examined very closely by this committee, which has responsibility for several agencies, not just NASA. Just because you start to focus on the moon, Mars, and deep space doesn't mean that these other programs have to go away. They can be, I think, taken under the umbrella of other agencies, and that ought to be looked at very carefully.

Schmitt went on to cite NASA’s support of NOAA as one area that could be reviewed.

Aside from the discussion of earth science, much of the hearing focused on issues outside the purview of the Science Mission Directorate. However, in addition to her remarks on the value of the agency’s earth science efforts, former NASA Chief Scientist Ellen Stofan lauded a wide range of NASA’s science programs in her testimony. And during discussion of the ideal launch cadence for the in-development Space Launch System, she noted that it cuts in half the time needed to get to the outer solar system and said that the science community would be ready to make use of extra launches.

In addition, former Goddard Space Flight Center Director Thomas Young commented on NASA’s strategic planning for science in his testimony. In particular, he juxtaposed NASA’s “well-planned and focused” science activities with its “cloudy” strategy for human spaceflight and endorsed continued use of the National Academy of Sciences’ decadal surveys to set science priorities.

A few committee members asked questions on specific science topics, such as the prospects for finding life in the solar system, ways to bolster NASA’s aeronautics research, and NASA’s role in inspiring the next generation of scientists and engineers. For example, Smith referenced his “special interest” in the search for extraterrestrial life and asked Stofan about the search’s prospects over the next 10 years. Stofan explained that NASA’s exoplanet telescopes will provide many candidates that the James Webb Space Telescope could examine for signs of life. However, she said that it will take a subsequent generation of space telescopes to go from identifying potentially inhabited worlds to being more confident in them harboring life. In the meantime, she said the focus should be looking for life in our own solar system, with Mars, Europa, Enceladus, and Titan being the primary candidates.