Sen. Rand Paul (R-KY) has introduced a bill that would make significant changes to peer review and public access policies for federally funded research, such as requiring that a “taxpayer advocate” sit on every grant review panel. Coincident with the bill introduction, Paul convened a hearing at which he asserted that the amount of “silly” studies funded by federal agencies is evidence of a need to reform the system. 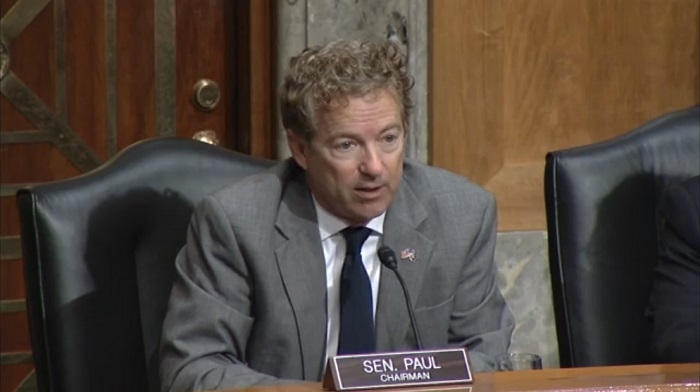 Sen. Rand Paul (R-KY) spoke about his bill to overhaul the federal research grant system at an Oct. 18 hearing.

Frustrated by what he views as wasteful spending on grants, Sen. Rand Paul (R-KY) is seeking to overhaul policies that pertain to federal funding of scientific research.

On Oct. 18, Paul introduced the “BASIC Research Act,” which would make several changes to peer review processes and would broaden public access requirements for grant applications and research results. On the same day, he convened a subcommittee hearing at which he explained the rationale behind the legislation, for which he currently is the sole sponsor.

Paul argued that the large number of “silly” studies he and others have identified are symptoms of inadequate peer review practices and distorted funding incentives. He also said he is concerned that “publish or perish” dynamics in academic research have contributed to research irreproducibility.

Paul said his bill would remedy these problems in part by requiring outside perspectives on peer review panels and increasing public access to information about federal grants.

The bill would require that all agency research grant review panels include both an expert in an unrelated research field and a “taxpayer advocate,” which it defines as “someone whose main focus is on the value proposed research delivers to the taxpayer.” It would also prohibit applicants from recommending reviewers and prevent the agency from disclosing to applicants who reviewed their proposal.

In addition, the bill incorporates almost all of the “Fair Access to Science and Technology Research (FASTR) Act” introduced in the Senate earlier this year. That bill would direct agencies with extramural R&D portfolios over $100 million to develop public access policies that require final peer-reviewed papers be made freely available online no later than 12 months after publication.

Paul’s legislation goes significantly beyond the “FASTR Act” by also requiring that agencies make all grant applications public and disclose information about any subgrants made out of the initial award.

Finally, the bill has a provision specific to the National Science Foundation that would convert its Office of Inspector General into the “Office of the Special Inspector General and Taxpayer Advocate for Research.” The primary duty of the office would be to “determine if the research will deliver value to the taxpayers by randomly selecting Federal grants for review after awards are made but prior to distribution of funds.”

NSF grants are frequently the subject of scrutiny by Paul, who remarked at a hearing earlier this year that he gets upset with the agency “almost on a daily basis.”

At the Oct. 18 hearing, Paul invoked the long history of senators identifying research projects they deem unworthy of taxpayer funding, noting that he remembered hearing about Sen. William Proxmire’s (D-WI) Golden Fleece Awards in the 1970s. Paul cited several contemporary examples, such as former Sen. Tom Coburn’s (R-OK) criticism of what has come to be referred to as a study of “shrimp on a treadmill.”

Paul is an avid participant in the practice of questioning individual grants, frequently issuing “waste reports.” Several other current members of Congress have compiled similar reports, including Sens. James Lankford (R-OK) and Jeff Flake (R-AZ). NSF has published responses to several of these reports on its website.

Sen. Gary Peters (D-MI), the ranking member of the subcommittee, used his opening statement to make the case that the current peer review system is sound. Although he did not directly criticize Paul’s proposal, he noted that the recently enacted American Innovation and Competitiveness Act, which he co-sponsored, reaffirmed the principles NSF uses to assess grant proposals:

While certain basic research projects that receive federal funding certainly have some very silly-sounding titles, further examination may reveal the true scientific merit and potential broader impacts of that work. Before a proposal gets one penny of funding, reviewers have to consider it based on criteria that include whether the proposal increases economic competitiveness, advances public health and welfare, or supports the national defense. It’s worth noting that only one in five proposals receive NSF funding at all, and that NSF is required to justify to the public why these proposals were lucky enough to receive funding.

Peters later observed that NSF has recently taken steps to improve the clarity of grantee project abstracts, which include non-technical explanations of the research and justify its value to the public.

Nevertheless, Paul appeared to be unconvinced by arguments that many silly-sounding grants are in fact serious and important studies. At the end of the hearing, he said,

We do have silly research going on. It’s not just the title, and cleverly changing the title to obscure the silliness of the project won’t make it any less silly … Let’s quit doing it, and let’s fix it because I’ll tell you the danger is if you don’t fix it and you’re part of the receiving folks in this fourth branch of government, there’s going to be a day when people are going to get mad and there’s not going to be any more money.

Witnesses focus on structure and incentives of research system

Testifying before the subcommittee were Brian Nosek, executive director of the Center for Open Science; Terence Kealey, an adjunct scholar at the Cato Institute; and Rebecca Cunningham, an associate vice president for research at the University of Michigan. Many of the witnesses’ remarks focused on the structure and associated incentives of the research enterprise.

Nosek said that the current “culture of incentives” for scientists rewards novel results and sometimes undercuts the transparency and reproducibility of research. To change this culture, he recommended that Congress expand on a 2013 White House public access directive by requiring that agencies develop policies to make both research data and results publicly available by default after publication or completion of the grant period.

Kealey testified that the federal government has imposed a “linear model” of innovation on the research enterprise based on an erroneous expectation that support for curiosity-driven research at universities translates into technological advances. He further asserted there is no evidence indicating that the expansion of federal support for science after World War II has contributed to U.S. economic growth.

Paul said he was particularly intrigued by this phrase, and asked whether serendipitous discoveries also come from industry research. Kealey replied that it is a “myth” that industry doesn’t fund basic research, and said that industry reduced its support due to “crowding out” by federal funding, which he said amounts to corporate welfare.

Cunningham disputed Kealey’s claim that the federally funded research system is premised on a linear model of innovation. “Instead, we really see much more of almost this what we call ‘tire track’ model where there’s a lot of interaction back and forth, even at early levels, between basic scientists and industry,” she said. 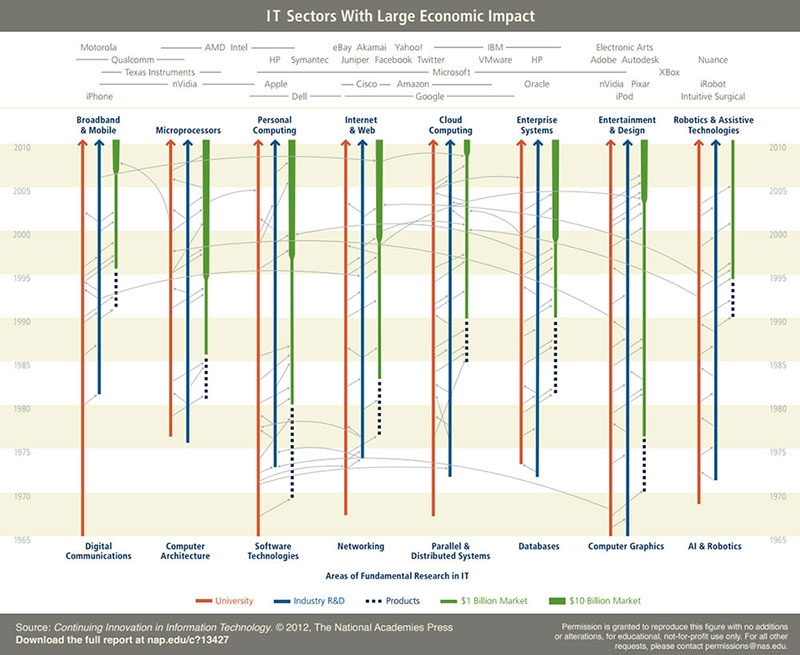 This “tire track” diagram traces the interdependencies between public and private sector R&D in the information technology sector. Details about the figure are available here.