President Trump’s fiscal year 2018 budget proposes a 16 percent cut for the National Oceanic and Atmospheric Administration and a 32 percent cut to the weather and climate agency’s research office. Many of the agency’s programs are targeted for termination.

In its fiscal year 2018 budget request for the National Oceanic and Atmospheric Administration, the Trump administration is seeking a 16 percent, or $900 million, funding cut below the fiscal year 2017 level. The decrease would be spread across NOAA’s six line offices, but the Office of Oceanic & Atmospheric Research (OAR), which houses most of the agency’s R&D, would be hit particularly hard, with a 32 percent cut.

The first chart below depicts proposed changes to NOAA’s line offices, while the second shows funding for accounts within OAR. More detailed budget information is available in FYI’s Federal Science Budget Tracker, and the full NOAA budget document known as the “Blue Book” is available here. 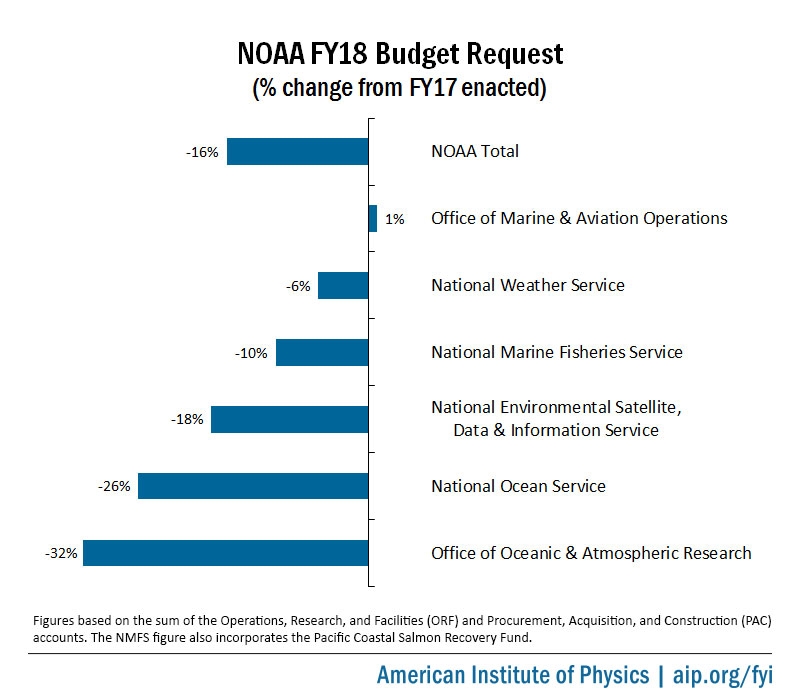 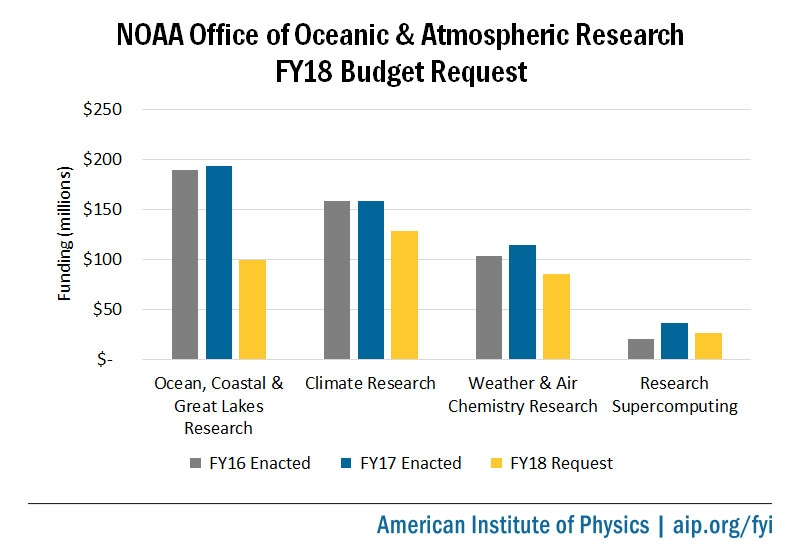 To achieve these proposed cuts, the NOAA budget proposes to terminate or otherwise eliminate support for programs across the agency, including for: the Office of Education, National Sea Grant Program, sub-seasonal weather outlooks, components of the Tsunami Research and Operational Warning program, and a handful of research and research-to-operations programs. These and additional programs up for elimination are listed in the “Other highlights” section below.

Despite the deep cuts, the agency prioritizes its two major weather satellite programs in development: the Joint Polar Satellite System (JPSS) and Geostationary Operational Environmental Satellites – R Series (GOES-R). While NOAA is requesting decreases in funding for both of these satellite programs, a gradual ramping down in resources over the next several years is in line with project plans. Even within a reduced satellite budget, NOAA is sticking to commitments on launch dates for the next three GOES-R satellites, scheduled to be launched separately between 2018 and 2024, and the first two JPSS satellites, to be launched this year and in 2022, respectively.

NOAA does, however, propose slashing funding nearly in half for the relatively new Polar Follow On program, raising the prospect of uncertainty for the third and fourth JPSS satellites which will be funded through this account. The budget request indicates that the proposed cuts would necessitate project re-baselining and delays for these two satellite missions.

Office of Oceanic and Atmospheric Research