President Trump’s fiscal year 2018 budget would cut the Department of Energy’s Office of Science by 17 percent, NASA by about 1 percent, and NIH by 18 percent, while the Advanced Research Projects Agency – Energy within DOE would be eliminated. The budget outline is silent on NSF and leaves out top-line funding levels for a number of major research agencies and offices. 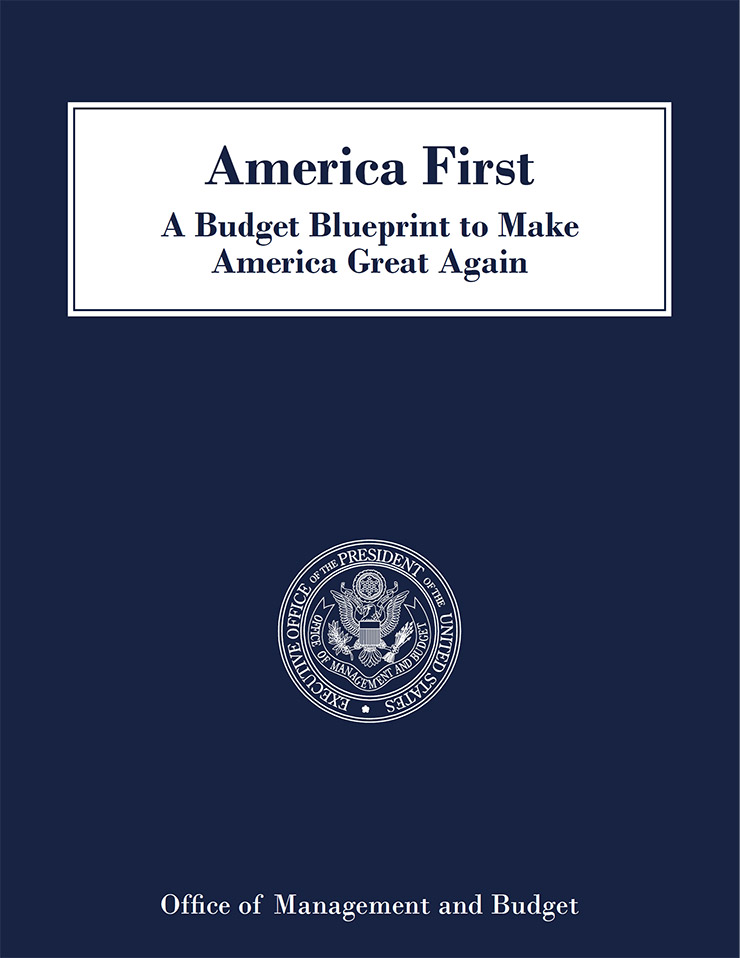 Below is an agency-by-agency analysis of the budget, given what we know now. More details for each agency will follow in mid-May, when the administration has said it will release its full budget proposal.

DOE is slated for an overall funding cut of 5.6 percent, or $1.7 billion, to $28.0 billion. However, that level masks even deeper cuts proposed for energy R&D within the department.

The Advanced Research Program Agency – Energy (ARPA-E) is entirely eliminated in the proposal, and the Office of Science would be cut by $900 million or 17 percent. The administration also intends to cut $2 billion, or about 50 percent, from the department’s applied energy offices, among them the Office of Fossil Energy, Office of Nuclear Energy, Office of Energy Efficiency and Renewable Energy, and the Office of Electricity Delivery and Energy Reliability. The outline does not specify how the research cuts would be distributed among those offices or the Office of Science research programs. As others have noted, these energy research cuts bear a striking resemblance to a budget blueprint the Heritage Foundation published last year.

In justifying the elimination of ARPA-E and a few of the department’s other research and technology programs, the budget outline says “the private sector is better positioned to finance disruptive energy research and development and to commercialize innovative technologies.”

In contrast, the outline proposes major boosts and policy changes for nuclear waste disposal and revitalizing the nation’s nuclear arsenal and infrastructure. In the largest proposed increase for a major federal department or agency, the National Nuclear Security Administration would see an 11 percent increase. This increase would “support the goals of moving toward a responsive nuclear infrastructure and advancing…warhead life extension programs” and “enable NNSA to begin to address its critical infrastructure maintenance backlog.” The Heritage blueprint recommended that NNSA be a central focus for DOE.

As has been stated in the past, Yucca is dead and this reckless proposal will not revive it. Washington needs to understand what Nevada has been saying for years: we will not be the nation’s nuclear waste dump.

Energy Secretary Rick Perry, who told DOE employees he would be a “powerful advocate” for the department, released a statement supporting the president’s budget outline:

The President's budget blueprint outlines a forward looking, mission focused budget for the Department of Energy. Our goal in the budget process is to properly align resources to the important missions of the Department.  … The Department’s mission over the last 40 years will look very different for the next 40 years as we continue to innovate. At the same time, we will keep our commitments to further the clean-up legacy projects, utilize our national laboratories for cutting edge science and improve our national security.

Compared with other agencies, the blueprint leaves NASA’s budget more-or-less steady, cutting its budget about 0.8 percent to $19.1 billion. Within this figure, the budget for Planetary Science would increase about 16 percent, from $1.63 billion to $1.9 billion, while the Earth Science budget would decrease about $100 million to $1.8 billion. The blueprint is silent on NASA’s Astrophysics and Heliophysics Divisions.

The blueprint maintains funding for the Space Launch System and Orion crew vehicle, but calls for the cancellation of the planned Asteroid Redirect Mission, which has had weak support in Congress. It reduces funding for aeronautics research slightly from $640 million to $624 million, while supporting R&D advancing “eventual over-land commercial supersonic flights and safer, more efficient air travel.”

It zeroes out NASA’s Office of Education, currently funded at $115 million, saying NASA should instead focus its education efforts through its Science Mission Directorate.

Acting NASA Administrator Robert Lightfoot said in a statement that the blueprint outlines “a positive budget overall for NASA,” and observed,

Overall science funding is stable, although some missions in development will not go forward and others will see increases. We remain committed to studying our home planet and the universe, but are reshaping our focus within the resources available to us — a budget not far from where we have been in recent years, and which enables our wide ranging science work on many fronts.

The key beneficiary of the Trump administration’s budget will be the U.S. military and the agencies that support it. The blueprint confirms the administration’s earlier announcement that it will request $639 billion for the Department of Defense — a $52 billion increase over the current DOD budget. The NNSA, which as mentioned above is a part of DOE, is slated for an increase of $1.4 billion, or 11 percent, over its current budget of $12.5 billion.

The blueprint provides no specific figures for defense S&T programs. However, it does state that additional funding will enable DOD and NNSA to address backlogs in deferred maintenance and modernization. While these passages do not specify laboratories as beneficiaries, Congress has recently identified both DOD and NNSA labs being in need of maintenance and recapitalization.

A separate document that the White House Office of Management and Budget sent today to Speaker of the House Paul Ryan (R-WI) requests additional defense funding for the remainder of fiscal year 2017. Among the funds sought is $2.1 billion for DOD’s Research, Development, Test & Evaluation budget to accelerate the movement of key defense technologies toward deployment.

The president’s budget outline does not include a top-line funding level for NOAA, but it does reference several of the agency’s mission offices. The administration proposes to “zero out” over $250 million for coastal and marine management, research, and education, although it does not weigh in on the balance of weather or climate research within the Office of Atmospheric and Oceanic Research.

The outline indicates the NOAA budget will allow the Joint Polar Satellite System and Geostationary Operational Environmental Satellite programs “to remain on schedule in order to provide forecasters with critical weather data to help protect life and property.”  However, it proposes pulling back funding of NOAA’s Polar Follow On satellite program.

The budget also says the administration supports the National Weather Service at a level of “more than” $1 billion. NWS is currently funded at $1.124 billion.

A more detailed NOAA budget proposal obtained by the Washington Post last week indicates the administration had proposed to cut the budget of the weather, climate, and oceans agency overall by 17 percent, although that “passback” draft was not necessarily final.

In a quote provided to Nature, David Titley, who served as NOAA chief operating officer from 2012 to 2013 and oceanographer of the Navy before that, emphasized that the budget proposal is particularly grim with respect to climate science:

While the details are hard to find in this budget it appears that climate research and climate observing systems are being cut by at least 20 percent across the government. Although we don’t know the exact extent of the cut, if you are being led to the gallows and no one is making eye contact with you, it is not a good sign.

The president’s proposal would reduce spending on the NIH by $5.8 billion, or 18 percent, to $25.9 billion.

The outline adds that the “the Budget includes a major reorganization of NIH’s Institutes and Centers to help focus resources on the highest priority research and training Activities.” No further details are offered, except that the budget will preserve funding specially allocated as part of the 21st Century Cures law enacted earlier this year.

A number of Democratic members of Congress are already calling out the president’s proposed cuts to biomedical research as a reason to oppose the budget.

The blueprint says that the administration will request “more than $900 million” for the USGS, which is currently operating on a budget of $1.062 billion. The allocated figure “includes funding for the Landsat 9 ground system, as well as research and data collection that informs sustainable energy development, responsible resource management, and natural hazard risk reduction.”

The EPA is currently facing a particularly hostile political environment. The White House blueprint decreases funding for the agency by $2.6 billion, or 31 percent, to $5.7 billion. It decreases the budget for EPA’s Office of Research and Development by $233 million, or almost 40 percent, to $250 million.

The blueprint explains that, under its new budget, “ORD would prioritize activities that support decision-making related to core environmental statutory requirements, as opposed to extramural activities, such as providing STAR grants.” The blueprint also calls for the discontinuation of all climate research within the agency alongside funding for the Clean Power Plan and international climate change programs, such as the Global Climate Change Initiative.

Importantly, cuts to EPA come at a time when both chambers of Congress are seriously considering legislation that would substantially increase the agency’s burden of documenting the science used in crafting regulations. A Congressional Budget Office report on a previous version of one of the proposals estimated its requirements would cost the agency an additional $250 million annually.

The blueprint contains little indication of the administration’s intentions for three important bodies for government science: the National Science Foundation, the National Institute of Standards and Technology, and the White House Office of Science and Technology Policy.

NSF, currently funded at about $7.5 billion per year, is presumably one of the agencies included within a single line item, labeled “Other Agencies,” with budgets totaling $29.4 billion. The blueprint indicates that these agencies are collectively slated for a 9.8 percent cut. It is unclear whether this cut would be enacted across the board or apportioned heterogeneously.

The National Institute of Standards and Technology, currently funded at $964 million, also receives no direct mention, though, again, the Department of Commerce, which administers NIST, is slated for a top-line cut of $1.5 billion, or 16 percent.

The blueprint does call for the elimination of $124 million in federal funding for NIST’s Manufacturing Extension Partnership (MEP) program, which facilitates public–private partnerships with small and medium-sized manufacturers. The Trump administration’s budget suggests that it ought to be funded through non-federal sources of revenue.

The blueprint contains no information at all on the White House’s own budget. While the White House website has recently reactivated its pages for the Office of Science and Technology Policy, Trump has not yet named a director nor given any indication of how large its staff will be.