While the U.S. continues to lead in many science and engineering measures, including overall R&D spending, China is rapidly catching up with the U.S. in the rankings, according to the National Science Board’s latest Science and Engineering Indicators report.

On Jan. 18, the National Science Board released the biennial Science and Engineering Indicators, a congressionally mandated report that provides extensive, policy-neutral information on the state of the global science and engineering (S&E) enterprise. Accompanying the report is a digest that highlights 42 indicators grouped into themes such as R&D spending, STEM education and workforce, invention and innovation, and the public understanding of science.

The report finds that the world’s nations are continuing to accelerate the growth of their knowledge- and technology-intensive economies. And as in other recent iterations, the report documents how the S&E landscape — historically concentrated in the U.S., Europe, and Japan — is rapidly shifting as China and other countries continue to increase their R&D investments.

The report makes clear that while the U.S. remains the global leader in many S&E measures — such as total R&D investment, advanced S&E degree production, and venture capital investment — China has continued its rapid rise in the rankings.

Global R&D expenditures have more than doubled since 2005, according to the report, growing at an average rate between 6.3 and 7 percent per year. Three regions — East/Southeast and South Asia, North America, and Europe — comprise 90 percent of the nearly $2 trillion total.

The U.S. remains the world leader in overall R&D spending, growing an average of 4 percent per year between 2000 and 2015. However, Asian economies surpassed both the U.S. and Europe as having the largest concentration of R&D spending, rising from 25 percent of the global share in 2000 to 40 percent in 2015.

China has seen by far the largest R&D growth, accounting for almost one-third of the global increase over that period and reaching 21 percent of the global total in 2015 with an average growth rate of 18 percent per year. At the same time, North America and Europe saw their global shares decrease to 28 percent and 22 percent, respectively. 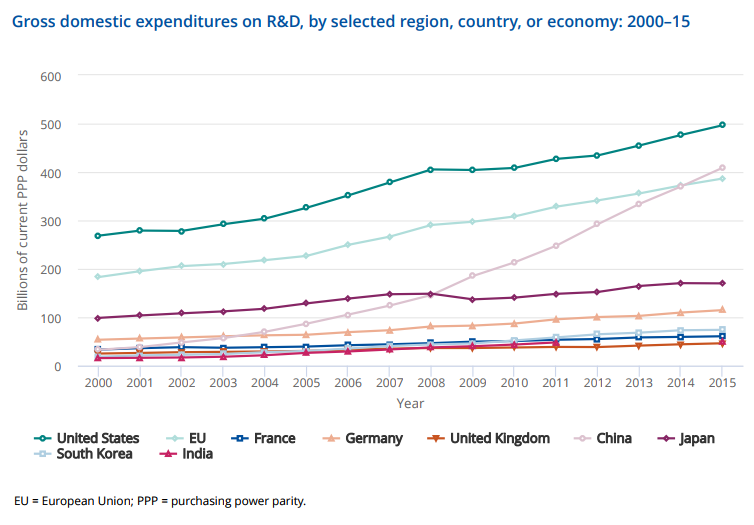 The rapid growth of S&E economies in China and other Asian countries also contrasts with the relative stagnation in U.S. R&D intensity - a measure of R&D expenditure as a percentage of GDP. Although U.S. R&D intensity has stayed relatively stable, hovering near 2.7 percent in recent years, it dropped in global ranking from eighth place in 2009 to eleventh place in 2015. Meanwhile, China and South Korea’s R&D intensities have doubled since 2000, reaching 2.1 percent and 4.2 percent, respectively, in 2015.

The report notes that while federal R&D funding has generally increased annually since the 1950s, the government’s share of total U.S. R&D spending has steadily declined, reaching a historic low of 24 percent in 2015 – far below the peak of 67 percent in 1964. The report says this trend is primarily due to business R&D growth outpacing federal spending. It also identifies the reduction in federal R&D funding in the period following the Great Recession as a factor.

However, the federal government remains the largest funder of basic research, providing $37 billion or 44 percent of the total. At a release event for the report on Jan. 18, National Science Foundation Director France Córdova stressed the impact federal investment has in sustaining U.S. leadership in S&E, saying:

We may be an innovation leader today, but other nations are rapidly gaining ground. It is not inconceivable that we may be overtaken in time. Our investment in basic research must remain a national priority. 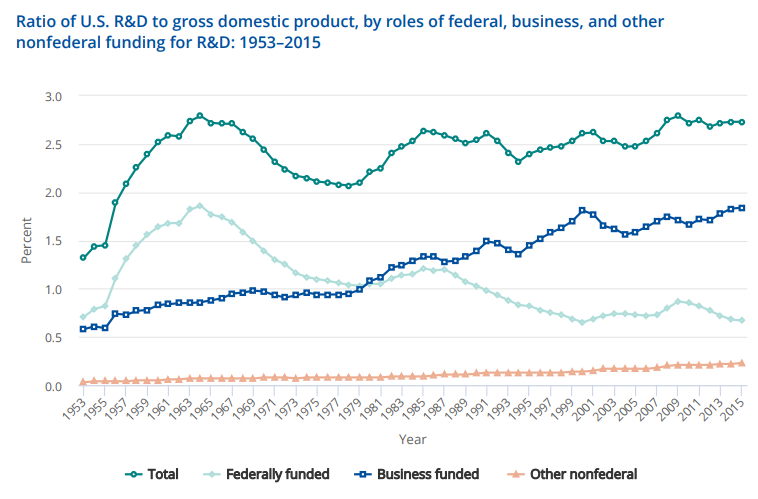 R&D competition ‘not a zero-sum game’

When asked at the release event to elaborate on the report’s findings, NSB member Geraldine Richmond, who oversaw the report’s assembly, said that the board is concerned with how current trends in U.S. R&D funding may impact the country’s leading role in S&E. She warned that the ongoing decline of federally-funded R&D “will continue to erode [the U.S.’] ability to be competitive to the level that you see other countries rising, such as China.”

Richmond noted that while scientific and technological progress in China and other nations generates competition for the U.S., it is “not a zero-sum game.” The expansion of the global R&D landscape, she said, also creates new opportunities for international collaboration and innovation.

Richmond also highlighted the rising trend of R&D specializations, such as China’s interest in digital communications, semiconductors, telecommunications, and optics. Therefore, in the context of an increasingly interconnected world, she said, “The big question is where do we want [the U.S.] to lead in S&T, and where are we content to participate?”

While the Trump administration has scaled back support for larger multinational scientific collaborations, it has also reinforced bilateral partnerships. Last year, the U.S. and China signified their commitment to extend their long-standing S&T agreement, which was last renewed in 2011.

The rising competition in S&E, particularly that posed by China, has been a focus of several recent congressional hearings. These hearings highlighted that the Chinese government has taken an aggressive approach to rapidly grow R&D in several areas, particularly artificial intelligence, quantum technology, and space technology. These areas are among a number of priority science projects identified in China’s current five-year strategic plan for social and economic development, which also emphasizes innovation as the primary engine for economic growth. The plan establishes China’s goal of achieving a 2.5 percent R&D intensity by 2020.

House Science Committee Chair Lamar Smith stressed the importance of maintaining U.S. leadership in quantum technologies at a hearing last October, pointing out that China has “successfully sent the first-ever quantum transmission from Earth to an orbiting satellite.” He said that “Although the U.S. retains global leadership in the theoretical physics that underpins quantum computing and related technologies, we may be slipping behind others in developing the quantum applications.”

Meanwhile, at a Jan. 9 House Armed Services Subcommittee hearing on China’s pursuit of emerging technologies, Subcommittee Chair Elise Stefanik (R-NY) noted that China’s plans for technology innovation comprise “a top-down, government-driven agenda that provides a roadmap for strategic collaboration between industry, academia, and civil society.” She said that the U.S. should reflect on the Chinese government’s recognition of innovation as a driver of economic growth, and called for “a national-level dialogue for science and technology policy” that will encompass both defense and the broader economy.