The midterm review of the National Academies planetary science decadal survey finds NASA has made strong progress in implementing the survey’s recommendations, including flagship missions to Mars and Europa. However, it warns Congress’ push for missions relevant to the search for extraterrestrial life beyond missions already recommended risks undermining the survey process.

On Aug. 7, the National Academies released the midterm review of “Vision and Voyages,” its latest decadal survey for planetary science. Issued in 2011, the survey covers the period from 2013 to 2022. It is considered an authoritative summary of the needs and priorities of the planetary science community and is the primary planning document for NASA’s Planetary Science Division.

The committee's report lauds recent discoveries in planetary science, stating this decade has been one of the field’s “most important and scientifically productive periods ever.” It also praises NASA’s “impressive progress” in developing new missions, including the Mars 2020 and Europa Clipper flagships, as well as its maintenance of strong funding for research and analysis and technology R&D.

However, the report does note some deviations from survey recommendations. In particular, it warns the survey did not recommend or vet the lander mission to Europa that Congress has directed NASA to undertake. It also criticizes NASA’s circumvention of the decadal survey process in opening its medium-scale New Frontiers program to proposals for “Ocean Worlds” missions.

The review report points out that “Vision and Voyages” made its recommendations for large-scale missions to Mars and Jupiter's moon Europa contingent on NASA controlling costs to avoid crowding out other parts of the Planetary Science portfolio. It affirms the descoped Mars 2020 and Europa Clipper missions conform with that recommendation.

However, the review does not approve of the Europa lander that Rep. John Culberson (R-TX) has been pushing in addition to the Clipper. Culberson, who chairs the House subcommittee responsible for NASA’s budget, hopes the second mission could find evidence of life in Europa’s subsurface ocean and has cited the decadal survey in justifying funding for it.

Noting “congressional interest in a Europa lander,” the review stresses that the survey specifically identified a lander as a possibility for the “far term.” It observes that NASA’s preliminary lander studies have not included a cost and technical evaluation, and states the midterm committee believes the mission could cost “in the multiple billions of dollars range.” Accordingly, the review recommends,

As a prospective flagship mission, the results of the NASA Europa lander studies should be evaluated and prioritized within the overall [Planetary Science Division] program balance in the next decadal survey.

At present, NASA continues to study the lander mission and has not formally approved it. However, current appropriations law requires the agency to target a 2024 launch date and provides funding commensurate with that goal. Were NASA to abide by the review’s recommendation, it would have to delay advanced work on the lander until 2023 at the earliest and then proceed only if the next survey recommends it. 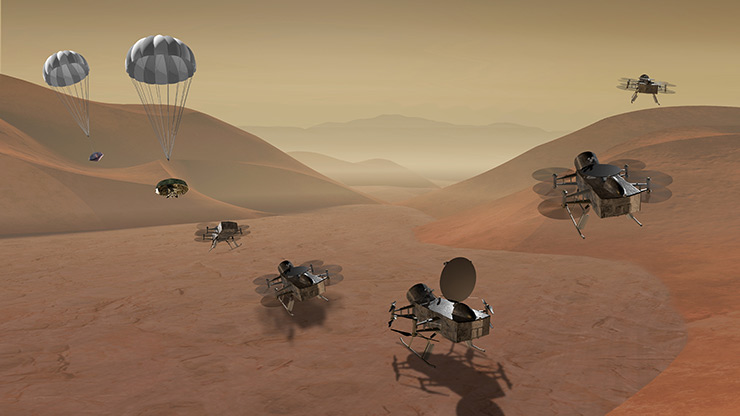 Dragonfly is a finalist for the Planetary Science Division’s next New Frontiers mission. Proposed through NASA’s new Ocean Worlds program, it consists of a rotorcraft that would land on Saturn’s moon Titan. The moon is covered in large lakes of liquid hydrocarbons and may harbor a saltwater ocean beneath its icy crust.

Another target for criticism in the review is NASA’s new Ocean Worlds program, which focuses on extraterrestrial liquid environments as a key to understanding how life might emerge elsewhere in the universe. Again led by Culberson, Congress created the program through the fiscal year 2016 appropriations law. In late 2016, NASA included Ocean Worlds missions among those it would consider for its next New Frontiers mission. Last year, NASA selected Dragonfly, an Ocean Worlds mission that would use a rotorcraft to explore Saturn’s moon Titan, as one of two finalists for the mission. A final selection is due next year.

The review notes that the inclusion of Ocean Worlds missions took place “outside the decadal survey process.” It reports that, of the scientific groups that advise the Planetary Science Division, only the Outer Planets Assessment Group supported the addition. Other groups representing researchers who study the Moon, Venus, Mars, and asteroids and other small bodies did not. The review warns, “Such a process could undermine the scientific priorities of the decadal survey and community support for them.”

As with the Europa lander, the review suggests an Ocean Worlds program could be implemented after consideration in the next decadal survey.

Recognizing that new discoveries and “external factors” can “compel NASA to reassess decadal survey priorities,” the review acknowledges the agency should be allowed to deviate from survey recommendations between surveys. It stresses, though, that any deviations should be subject to “thoughtful consideration” and be “consistent with the general philosophy and approach of the decadal survey.”

The review observes that a recent change to the charter of the National Academies Committee on Astrobiology and Planetary Science (CAPS) allows it to produce documents called “letter reports,” and suggests they would be an appropriate mechanism for assessing potential deviations. The review notes that CAPS is currently preparing such a report on the lunar science and exploration initiative that NASA proposed this year and that Congress appears set to endorse.

“Vision and Voyages” recommended an aggressive timetable for the selection and launch of missions in both the New Frontiers program and the Discovery program, which supports small-scale Planetary Science missions. The review notes that, owing largely to constrained budgets in the earlier part of the decadal period, NASA has fallen behind pace. Finding the funding situation has now improved, it recommends the agency catch up by selecting three Discovery missions from its next two announcements of opportunity and pushing up the next New Frontiers announcement of opportunity from 2023 to late 2021.

Following a provision in last year’s NASA Transition Authorization Act, the midterm review also devotes an entire chapter to NASA’s Mars exploration architecture. It concludes that NASA’s long-range plans for a “lean and rapid” program to return samples collected by the Mars 2020 rover should fulfill the decadal survey’s science goals. However, it also warns the telecommunications infrastructure currently in orbit around Mars is “fragile and aging” and that a failure of a single orbiter would compromise the science return from missions on the surface.

In addition to the Mars and Europa flagship missions, “Vision and Voyages” also recommended a flagship mission to Uranus, while noting that Neptune, the solar system’s other “ice giant,” is an equally attractive destination. The review expresses no dismay that NASA has yet to approve an ice giant mission. It does, though, sharply criticize a planning study for such a mission released last year. In particular, it rejects the study’s suggested inclusion of a bulky Doppler imager as an unjustified technical risk.

The midterm review concludes by sketching out various issues the next decadal survey should consider. NASA is expected to issue its statement of task for the survey in late 2019, with the goal of having the National Academies deliver its final report in early 2022.

The review states it is difficult to predict the implications for planetary science of current NASA initiatives, such as its long-term focus on human space exploration and growing use of commercial launch providers. Addressing NASA’s growing interest in small satellites, it notes the Planetary Science Division is developing mission concepts for the spacecraft and that a CubeSat technology demonstration mission is currently on its way to Mars. It also observes there is as of yet no mechanism for prioritizing such missions.

The review points out NASA did not act on the recommendation in “Vision and Voyages” that it accept proposals for space-based telescopes in its competitions for Discovery missions. It suggests that NASA should conduct an assessment of their value before the next survey.

The 2017 CAPS letter report, “Getting Ready for the Next Planetary Science Decadal Survey,” collects and summarizes a large number of mission concepts currently in circulation, including one for a dedicated space-based telescope for planetary science. The midterm review recommends that NASA should sponsor detailed studies of between eight and 10 of the concepts to inform the deliberations of the survey committee.