Congress sent two bills to the president last week that provide policy direction to the Department of Energy Office of Science and Office of Nuclear Energy, respectively. The House also passed legislation to establish a National Quantum Initiative, which now awaits action in the Senate.

Last week, the House passed three major research policy bills on voice votes. The “Department of Energy Research and Innovation Act” and the “Nuclear Energy Innovation Capabilities Act” are headed to President Trump for his signature, while the “National Quantum Initiative Act” now awaits action in the Senate.

The two energy research bills have been under development since the Obama administration, while the quantum bill is the product of a recent surge of congressional interest in quantum information science. Counterpart quantum legislation is under active consideration in the Senate. 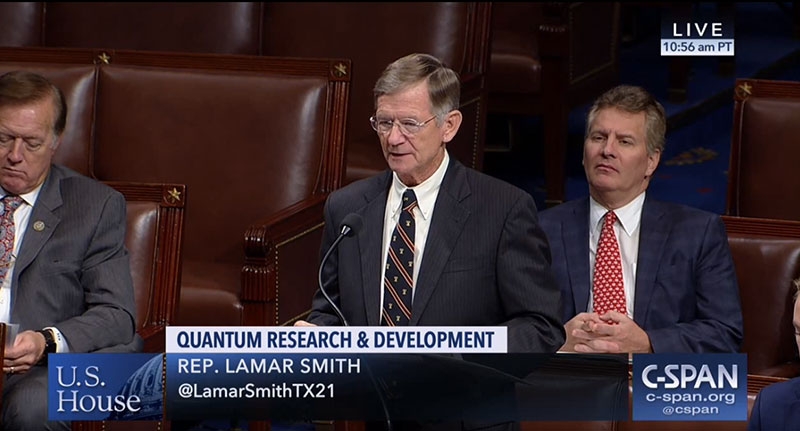 House Science Committee Chair Lamar Smith (R-TX) speaking in support of the “National Quantum Initiative Act” on the floor of the House of Representatives.

During floor consideration of the three bills on Sept. 13, House Science Committee Chair Lamar Smith (R-TX) and Ranking Member Eddie Bernice Johnson (D-TX) both referred to the “DOE Research and Innovation Act” as the “first comprehensive authorization” for the DOE Office of Science. Smith further characterized the bill as the culmination of a four-year effort to “set clear science priorities” for the department.

Although federal agencies have some latitude to undertake initiatives without explicit approval, legislative authorization enshrines agency activities in law. Authorization bills can also mandate that agencies undertake new activities, though their implementation can hinge on funding appropriations. In her remarks, Johnson observed that the Office of Science has received relatively little statutory direction.

“Unlike the National Science Foundation, NASA, and nearly every other major scientific research agency stewarded by the federal government, the Office of Science has not received the statutory guidance and support that its capabilities and mission warrant,” she said.

The Office of Science has previously received legislative direction through the Energy Policy Act of 2005 and the America COMPETES Act of 2007. However, the new legislation goes further by providing detailed direction to all six of the office’s main research programs and offering legislative backing to various research coordination and technology commercialization activities.

According to a House Science Committee staff member, the intention was not to cover every activity of the office but rather to convey priorities that Republicans and Democrats on the committee share. The staffer noted that many of the provisions were agreed to during negotiations that occurred in 2016 as part of an unsuccessful attempt to pass a broad energy policy bill.

Many of the provisions in the “DOE Research and Innovation Act” enshrine existing activities into law, while a few direct the department to pursue new research directions or revive old ones.

The bill also stipulates that FES support R&D in tokamak-based, inertial, and “alternative and enabling” approaches to fusion energy generation. By mandating activities in inertial fusion, which is currently centered in the National Nuclear Security Administration, the bill broadens the scope of the FES research portfolio. FES is also instructed to assess whether follow-on funding is merited for projects supported by the Advanced Research Projects Agency–Energy, which has funded alternative fusion energy generation concepts in recent years.

Biological and Environmental Research. Among the bill’s most consequential provisions is its mandate that BER conduct research on the biological effects of low doses of radiation. DOE’s decision to end its low dose radiation research program in 2016 elicited bipartisan pushback from Science Committee members. Based on past spending patterns, the Congressional Budget Office estimates implementing this provision will cost about $20 million per year.

The bill also directs BER to conduct R&D in “fundamental, structural, computational, and systems biology.” Among the areas the bill indicates such research may encompass are efforts to understand the global carbon cycle, “including processes for removing carbon dioxide from the atmosphere.”

BES currently funds all 42 of DOE’s EFRCs and two innovation hubs focused on artificial photosynthesis and battery storage. Building on these programs, the bill directs BES to play a leading role in new cross-department initiatives focused on solar fuels and electricity storage.

High Energy Physics. The bill directs HEP to continue supporting research on the nature of neutrinos, rare decay processes, dark energy, and dark matter. It also instructs HEP to incorporate the P5 report recommendations into its planning and to ensure U.S. researchers have access to the world’s most advanced particle accelerator facilities.

Nuclear Physics. The bill directs NP to ensure its isotope production program does not compete with private industry unless the department determines that “critical national interests” compel federal involvement.

The “Nuclear Energy Innovation Capabilities Act” is the first among a set of pending nuclear energy technology bills to clear Congress. The legislation aims to address concerns about the health of the U.S. nuclear industry and promote the development of advanced reactors.

Its centerpiece is a requirement that DOE plan to complete construction of a reactor-based fast neutron source by 2025, contingent on the department’s formal determination of a mission need for such a facility. The multi-billion dollar user facility would be used to test fuels and materials for advanced reactors. The bill also directs DOE to establish a National Reactor Innovation Center through which companies can test new reactor designs at a DOE site.

Although DOE has yet to approve an initial design for the fast neutron test reactor, Congress nearly doubled the project’s current annual budget to $65 million in final spending legislation passed last week. Critics of the proposed facility argue that its reliance on plutonium poses a nonproliferation risk and that its ultimate value to the U.S. nuclear industry would be limited.

Its proponents maintain it is necessary to prevent U.S. companies from relying on other countries for testing facilities. In urging passage of the bill, Energy Subcommittee Chair Randy Weber (R-TX) noted the only analogous reactor in the world that is available for civilian research is in Russia.

“Without the direction provided in this bill,” Weber said, “we will lose the ability to develop innovative nuclear technology and be left importing next-generation reactor designs from overseas.”

The House Science Committee’s effort to launch a 10-year initiative to bolster quantum R&D is now squarely in the Senate’s court.

The House’s version of the bill would authorize $1.275 billion for quantum information science programs across DOE, the National Science Foundation, and the National Institute of Standards and Technology over the first five years of the initiative. In their floor remarks, Smith and Johnson both said it is “imperative” that the U.S. develop a national quantum research strategy to respond to increasing investments by other countries, most notably China.

The leaders of the Senate Commerce, Science, and Transportation Committee expressed similar sentiments before advancing a modified version of the legislation this summer. Due to differences in jurisdiction between the House and Senate committees, the Senate bill does not contain the DOE provisions.

However, a Senate staffer told FYI the Senate Energy and Natural Resources Committee has begun developing a DOE-focused quantum bill that it seeks to combine with the Commerce Committee’s version. To gather input, the committee has scheduled a hearing on Sept. 25 to examine DOE’s efforts in quantum information science.