The final fiscal year 2019 appropriations bill for the Department of Energy includes a 4 percent overall increase for the National Nuclear Security Administration, bringing its total budget to $15.2 billion. Congress approved the appropriation last week as part of a three-bill package, and President Trump is expected to sign it into law today at an event in Las Vegas.

The bill continues a multi-year spending surge that is financing a comprehensive modernization of the U.S. nuclear arsenal and its associated weapons production complex. These efforts are funded through NNSA’s Weapons Activities account, which has increased in the past decade from about $6.4 billion to just over $11 billion in fiscal year 2019. Within that account, funding for weapons-related research, development, test, and evaluation (RDT&E) activities is remaining steady this year at just over $2 billion. 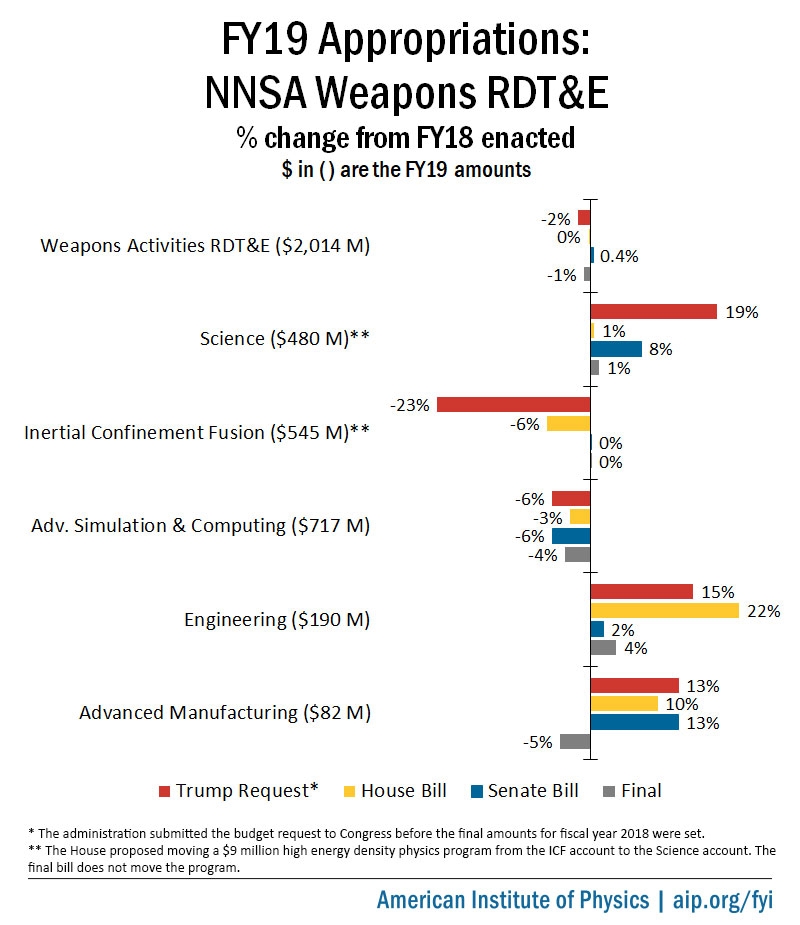 Meanwhile, the budget for nuclear nonproliferation activities will decrease 3 percent to $1.9 billion. Much of the drop is attributable to a decline in construction funding for the Mixed Oxide Fuel Fabrication Facility, a troubled plutonium disposal project that the Trump administration is seeking to terminate. Most programs focused on nonproliferation-related R&D and securing nuclear materials will see level funding or increases.

An explanatory statement accompanying the legislation specifies funding levels for individual programs and provides additional policy direction. In addition, language from the House and Senate Appropriations Committee reports on their original spending proposals is also valid unless negated by the final statement. Comparisons between those proposals, the president’s budget request, and final amounts can be found in FYI’s Federal Science Budget Tracker.

New low-yield warhead. The bill includes $65 million requested by the Trump administration to begin development of a low-yield warhead for submarine-launched nuclear missiles. Many Democrats objected to the proposal, arguing that low-yield weapons lower the threshold to initiating nuclear war. Several of them recently introduced the “Hold the Low-Yield Nuclear Explosive (LYNE) Act,” which would prohibit research, development, production, and deployment of such weapons. The administration maintains that the U.S. needs more “flexible” capabilities to enhance nuclear deterrence.

Inertial Confinement Fusion (ICF). The ICF program budget will remain level at $545 million. The administration had proposed cutting it by over 20 percent and initiating a three-year withdrawal of funding from the OMEGA Laser Facility at the University of Rochester. It justified the move as a “rebalancing” of the ICF program that would “strengthen long-term support for Stockpile Stewardship Program efforts” and free up resources for “higher NNSA priorities.”

Congress specifies a 7 percent increase for the OMEGA Laser Facility, bringing its budget to an all-time high of $80 million. It also maintains the National Ignition Facility budget at $344 million and specifies $7 million for the Naval Research Laboratory, $1 million below the current level. The administration had proposed zeroing out ICF funding for NRL’s Nike Laser Facility. 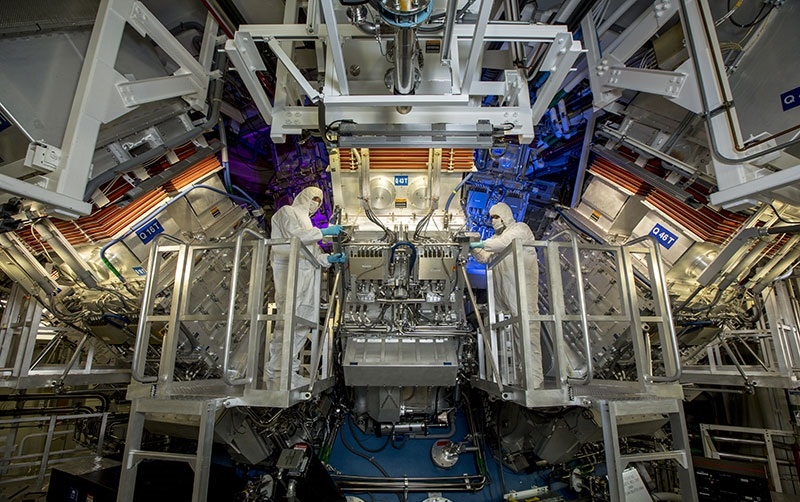 Technicians inspecting an optics assembly at the National Ignition Facility during a recent maintenance period.

Science. The Science program budget will increase 1 percent to $480 million, which is considerably less than the requested $565 million. Most of the proposed increase was for the new Enhanced Capabilities for Subcritical Experiments (ESCE) program, which seeks to improve capabilities for studying the late stages of plutonium implosions. Although the U.S. has abided by a moratorium on explosive nuclear tests since the early 1990s, experiments that implode plutonium without initiating a self-sustaining chain reaction are still permitted.

The administration proposed to nearly triple the ESCE budget to just under $120 million to address a “physics gap” in the understanding of plutonium behavior under extreme conditions. It also sought to more than double funding for enhancements to the U1a Complex at the Nevada National Security Site, where the subcritical experiments are conducted. The final agreement increases the ESCE budget by 25 percent to $50 million and reduces the U1a upgrade budget by 11 percent to $20 million. The statement offers no explanation for not meeting the administration’s request, but the House report states that “significant portions of the technology are reported to be at low technology readiness levels and need to be advanced” before the ESCE project proceeds in earnest.

Advanced Simulation and Computing. NNSA’s contribution to DOE’s exascale computing initiative is funded at the requested level of $163 million, a slight increase over the current level. Acquisition of exascale-class computer cooling equipment at Los Alamos National Laboratory and facility modernization at Lawrence Livermore National Laboratory are funded at the combined requested level of $47 million. The overall budget for Advanced Simulation and Computing will decrease 4 percent to $717 million, with $13 million specified for “integrating artificial intelligence approaches into mechanistic modeling and prediction.”

Engineering. The budget for the Stockpile Responsiveness Program will increase 13 percent to $34 million as requested. Launched in earnest in fiscal year 2018 with a $30 million appropriation, the program is meant to complement the Stockpile Stewardship Program by providing weapons scientists and engineers with opportunities to exercise the full range of skills involved in developing nuclear weapons.

Infrastructure repair. In their respective Nuclear Posture Reviews, both the Obama and Trump administrations articulated an acute need to modernize the nuclear weapons complex’s vast portfolio of facilities, some of which date back to the Manhattan Project. Congress has likewise drawn attention to NNSA’s large backlog of deferred facility repair and recapitalization. The final agreement provides just over $1 billion for facility repair and recapitalization, which is near the historically elevated level Congress has provided over the past two years to address the backlog. Within this amount, it provides the $23 million requested for recapitalization of the MESA silicon fabrication facility at Sandia National Laboratories.

Research reactor conversion. NNSA is directed to submit cost estimates for converting research reactors that rely on highly enriched uranium to alternative fuels. The provision is included in lieu of House report language that would have prohibited conversion of the Advanced Test Reactor at Idaho National Laboratory and the High Flux Isotope Reactor at Oak Ridge National Laboratory. The House report maintained that such conversion is prohibitively expensive and unnecessary given that the reactors are located on secure DOE sites.

Plutonium disposal. Funding for the Mixed Oxide Fuel Fabrication Facility in South Carolina will decrease 34 percent to $220 million, which is equal to the amount the administration requested to close out the project. The administration believes the facility is no longer justifiable due to its ballooning costs and argues that placing the plutonium in a waste repository after diluting it would be a far cheaper means of disposal. It has also proposed to repurpose the facility for plutonium production.

The statement specifies that construction of the project continue, but permits the funds to be used for other purposes if DOE certifies that an alternative disposal method is substantially cheaper. It also provides $25 million to advance design activities for the dilute and dispose strategy.