In his new role as the Department of Defense’s top R&D official, Mike Griffin is arguing that DOD must shed its risk-averse culture and further embrace prototyping to accelerate innovation. He has also elaborated on his top technology priorities in recent congressional testimony, stressing that DOD must counter other countries’ growing hypersonic weapons capabilities and should focus on transitioning directed energy weapons from R&D to deployment.

Under Secretary of Defense for Research and Engineering Mike Griffin made back-to-back appearances on Capitol Hill last week, testifying alongside former Google CEO Eric Schmidt at a House hearing on “Promoting DOD’s Culture of Innovation” and appearing as the sole witness at a Senate hearing the next day on “Accelerating New Technologies to Meet Emerging Threats.”

Griffin and Schmidt both argued forcefully that DOD must overhaul its processes for acquiring technologies to permit greater experimentation before setting capability requirements. Both also identified technologies they believe will be most significant for DOD in the coming years, with Griffin focusing his remarks on hypersonic missiles and directed energy weapons and Schmidt focusing on artificial intelligence.

Griffin elaborated on his enthusiasm for directed energy at the Senate hearing, detailing why he believes it will be possible over the coming decade to field laser systems for a multitude of defensive applications, including space-based missile defense. 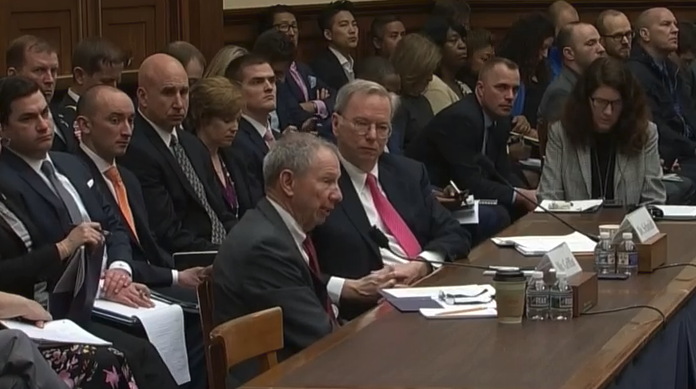 Under Secretary of Defense for Research and Engineering Mike Griffin, left, testified alongside Defense Innovation Board Chair and former Google CEO Eric Schmidt at a House Armed Services Committee hearing on April 17.

Griffin and Schmidt say iteration is key for innovation

Griffin is the first occupant of the recently resurrected R&D position, which last existed in the 1980s. Congress recreated the role out of concern that DOD was placing an inadequate emphasis on halting the erosion of U.S. technological superiority. At the House hearing, Griffin argued that the increasingly global R&D landscape requires DOD to place a premium on the speed at which it can develop and field new capabilities.

“The reality is that we live in a time of global access to technology and global access to scientific talent. It is no longer preeminently concentrated here in America,” Griffin said at the outset of his opening remarks. “Innovation will remain important, always,” he continued, but given this global dispersion of technology and talent, “greater speed in translating technology into fielded capability is where we can achieve and maintain our technological edge.”

Griffin made clear that “instilling within the department a culture that embraces a more agile approach to development” is his overarching priority. He stressed that DOD needs to engage in more extensive prototyping before it sets requirements for weapons systems and initiates major acquisition programs.

Schmidt testified in his role as chair of the Defense Innovation Board, an advisory committee DOD created in 2016, and made similar points to Griffin with respect to computer software development. He argued that DOD should use iterative development methods and bolster its in-house expertise by creating a career track for computer scientists, similar to how it has tracks for doctors and lawyers. The board has since issued a report that identifies “Ten Commandments” for DOD software systems and urges the department to establish computer science as a “core competency” as part of a broader expansion of STEM talent development programs.

“My summary conclusion is that we have fantastic people who are trapped in a very bad system,” Schmidt said, later adding, “If I can make a strong statement, the DOD violates pretty much every rule in modern product development.”

Asked by Armed Services Committee Chairman Mac Thornberry (R-TX) if he agreed with Schmidt’s diagnosis, Griffin replied, “It would be very difficult for me to agree more strongly with him.”

Hypersonics and directed energy at top of Griffin’s priorities list

Rep. Rob Wittman (R-VA) highlighted that Griffin has said his highest priority is to develop hypersonic missiles, which travel at least five times faster than the speed of sound, as well as capabilities to defend against them. Wittman quoted verbatim from a March speech in which Griffin said, "I'm sorry for everybody out there who champions some other high priority, some technical thing. It's not that I disagree with those, but there has to be a first, and hypersonics is my first."

Griffin noted that hypersonic weaponry is called out within the new National Defense Strategy and said that other countries have capitalized on earlier U.S. R&D in the field to develop their own hypersonic capabilities. “It is time for us to renew our emphasis on and funding of these areas in a coordinated way across the department,” Griffin said, adding,

The day after the hearing, DOD announced it plans to award Lockheed Martin nearly $1 billion to develop a hypersonic cruise missile.

Griffin also said he intends to renew DOD’s focus on developing directed energy weapons. Strategic Forces Subcommittee Chairman Mike Rogers (R-AL) said such weapons have “been five years away forever,” but nonetheless expressed strong support for pursuing them, asking Griffin if he is concerned about DOD’s directed energy programs being too decentralized.

“My mission is to go forward and unify our directed energy development across the department,” Griffin replied. “That is what I want to do, because right behind the hypersonic threat, I am concerned that we are not leveraging our technical advantage in directed energy weapons.”

Griffin also identified quantum science and microelectronics as being among DOD's priority areas in his written testimony, although he did not discuss them at length in the hearings.

Just as hypersonics is Griffin's"first of a number of firsts,"  Schmidt said that for him, artificial intelligence is "first among a number of firsts." He noted that China has made it a goal to lead the field by 2030. He also commented on DOD’s recently announced plans to create an artificial intelligence center, saying he hopes it interfaces with universities to ensure it does world-class work.

DOD has since indicated that it hopes to launch the center within six months and that it has not decided whether to stand up analogous centers for hypersonics and directed energy.

Multiple committee members asked how DOD should leverage work being done in academia and the private sector given that many technologies applicable to military missions are produced outside of the government.

For instance, Rep. Rick Larsen (D-WA) contrasted how the government controlled the development of the atomic bomb and space technology with how the private sector now leads the development of technologies such as artificial intelligence and cloud computing. Schmidt asserted that despite this shift, the federal government still plays a vital role in funding basic research:

I think that the relationship between the tech industry and research funding that's come over history from the government has been profound. … So the more basic research that you all in aggregate can fund across the sciences and so forth, it really does benefit the military mission. … It may be indirect, but the fact of the matter is that pretty much every conversation we've had so far this morning started off with some form of government or National Science Foundation funding for the basic research that created it.

In a separate exchange, Rep. Salud Carbajal (D-CA) said he believes DOD should expand its partnerships with academia, noting how in his district the University of California Santa Barbara (UCSB) has had mutually beneficial partnerships with the department.

Griffin replied that he is the “strongest possible believer” in the value of Federally Funded Research and Development Centers (FFRDCs) and University Affiliated Research Centers (UARCs), pointing to his firsthand experience with the Jet Propulsion Laboratory, which Caltech operates on behalf of NASA. Schmidt commented that universities can help compensate for DOD’s innovation shortfalls, noting that UCSB’s physics department is a “center of extraordinary progress on quantum computing.”

At the Senate hearing, Emerging Threats and Capabilities Subcommittee Ranking Member Martin Heinrich (D-NM) noted his personal passion for advancing directed energy technology and asked Griffin to comment on “how we're going to finally make that transition from R&D into procurement.” Griffin replied that based on his longstanding involvement with the directed energy community and his conversations with current experts,

Griffin said there currently are two very promising approaches: diode-pumped alkaline lasers being developed by the Department of Energy at Lawrence Livermore National Laboratory and fiber combined lasers being developed both by industry and government laboratories. Pointing to how MIT’s Lincoln Laboratory has developed a laser that can project 35 kilowatts of controlled power, he said, “You're getting very close there to something that will allow us to defend our forces.”

Earlier this year, Griffin and Heinrich delivered addresses at this year’s Directed Energy Summit, an annual conference in Washington, D.C. Heinrich detailed a series of recent steps Congress has taken to prioritize directed energy programs. Griffin described how he is open to pursuing a variety of directed energy technologies in addition to lasers, including high-power microwaves and particle beams, “as we come out of the slough of despondence in directed energy into an environment that is more welcoming of our contributions.”

He also said he is open to collaborating with other countries, recounting how he gained appreciation for the value of international partnerships when he served as NASA administrator.

“The way to technical superiority is to run faster and work harder and not to try to wall off our own capabilities. So, as we explore directed energy technologies, where there are opportunities, I will be looking for careful and measured but still very real cooperation with our allies and partners. I think in the long run that will benefit us,” he said.