The National Science Foundation budget is held essentially flat in the fiscal year 2019 request, but beneath the topline numbers are significant changes, including a new cross-disciplinary funding model to support the foundation’s 10 Big Ideas.

The Trump administration has requested an essentially flat fiscal year 2019 budget for the National Science Foundation, proposing $7.47 billion, less than 1 percent below the fiscal year 2017 level. Within that amount, support for NSF’s six research directorates and related activities would increase 2 percent to $6.15 billion.

The total number of research awards is expected to decline slightly from 11,400 in fiscal year 2017 to 11,100. NSF anticipates this would lead to a small drop in its award success rate, from 23 to 22 percent. 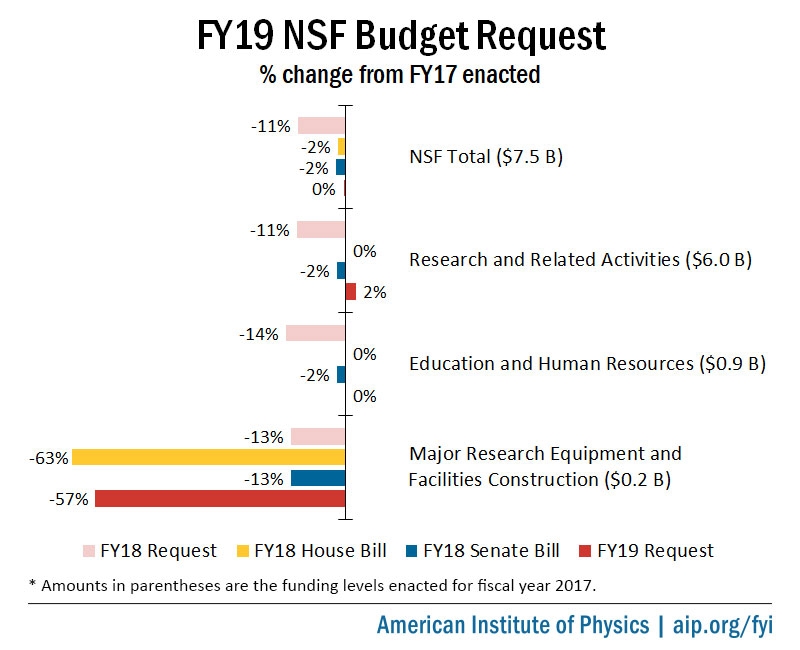 Click to enlarge. The fiscal year 2019 amount for the Major Research Equipment and Facilities Construction account does not include the $104 million requested for the Antarctic Infrastructure Modernization for Science (AIMS) project, which is being funded through the Research and Related Activities account by the Office of Polar Programs. 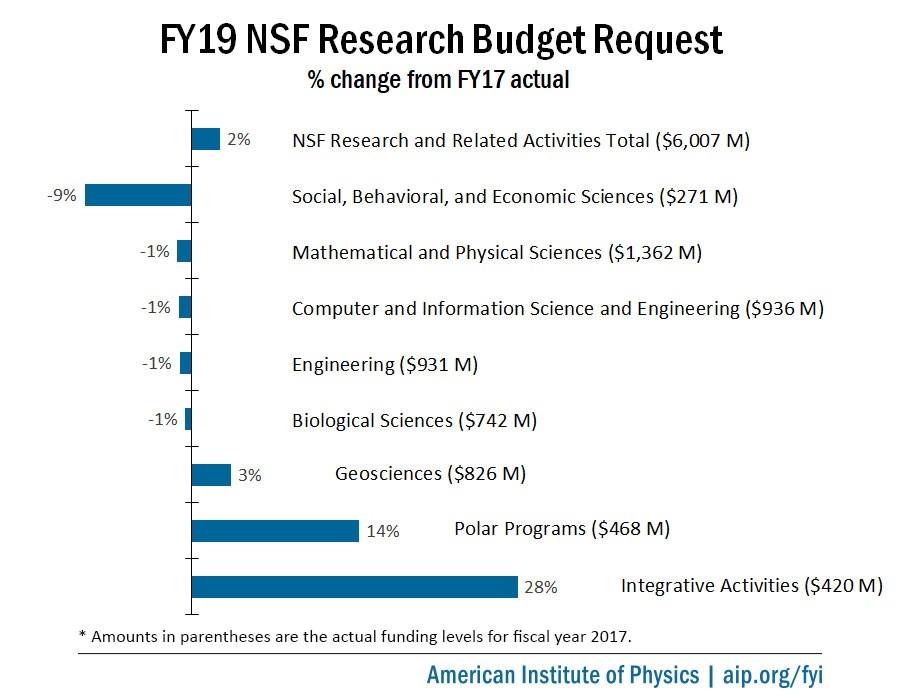 The proposal could have been much worse for NSF. A last-minute addendum submitted by the administration spared the agency from what would have been a 29 percent proposed cut. This request is also more generous than last year’s, which sought to slash NSF funding by 11 percent.

Appropriators in both the House and Senate rejected that cut, offering a softer 2 percent cut instead. By the time Congress finalizes fiscal year 2018 appropriations, likely by March 23, it may end up delivering a more favorable outcome for the agency. Following last month’s enactment of a bipartisan budget agreement to boost discretionary spending, appropriators now have more funds to allocate to federal programs, and NSF will probably benefit.

The full budget document for NSF is available here. Highlights in research and facilities construction are summarized below. FYI will report on NSF's STEM education accounts in a later bulletin. Further information about current funding proposals is available in FYI’s Federal Science Budget Tracker.

NSF’s 10 Big Ideas are front and center in the request, and for the first time the administration is requesting dedicated funding for each: a total of $343 million to be split among the directorates and the foundation’s other offices. In its budget overview document, NSF justifies the investment, saying,

The Big Ideas represent unique opportunities to position our Nation at the frontiers—indeed to define the frontiers—of global science and engineering leadership and to invest in fundamental research that advances America’s economic competitiveness and security.

The six research big ideas, each of which would receive $30 million, are:

To complement the big ideas, NSF is also proposing to establish new “convergence accelerators,” to advance certain research areas that have demonstrated readiness for “convergent and translational research.” NSF writes they “will be time-limited structural entities intended to leverage external partnerships to facilitate convergent and translational activities in areas of national importance.” The first two convergence accelerators, to be funded at a total of $60 million in fiscal year 2019, will specifically support the Harnessing the Data Revolution and Future of Work at the Human–Technology Frontier big ideas, bringing total support for those big ideas to $60 million each.

Together, the funding of the 10 big ideas and two convergence accelerators are elements of a new multidisciplinary, NSF-wide funding model. In justifying the new model, the agency explains,

Collaboration and convergence are required across NSF in order to achieve the agency’s mission and support the maximum number of researchers. No longer is any one research directorate at NSF the sole NSF funder of science in a given field. Science and engineering today requires innovative approaches to leveraging resources across all fields of science.

Although directorates and offices will coordinate across the agency to implement the 10 big ideas, each is assigned a managing directorate that will be responsible for its resources, budgeting, and reporting. For example, the request states MPS will manage the Quantum Leap and Windows on the Universe big ideas, while GEO will manage the Navigating the New Arctic big idea.

Mathematical and Physical Sciences. The request would cut MPS by 1.3 percent below fiscal year 2017 levels to $1.34 billion. Within that amount, $60 million would be dedicated to the directorate’s multidisciplinary activities office to support the Quantum Leap and Windows on the Universe big ideas.

This growth in multidisciplinary activities would draw some support away from the directorate’s five disciplinary divisions — Astronomical Sciences, Chemistry, Materials Research, Mathematical Sciences, and Physics — and their core competitive research grants. Research in the MPS divisions would see budget cuts of between 5 and 9 percent, although NSF emphasizes that researchers would be able to apply for grant funding from both the divisions and NSF-wide investments, including the big ideas.

Geosciences. The story is similar for GEO, which would receive a $27 million or 3.3 percent increase in the request to $853 million. Within that amount, research within the directorate’s three divisions – Atmospheric and Geospace Sciences, Earth Sciences, and Ocean Sciences – would be cut in the range of 4 to 6 percent, in part to make room for the $30 million in new multidisciplinary funding to support the Navigating the New Arctic big idea. The directorate also includes $40 million in Ocean Sciences to support the full restoration of funding for the Ocean Observatories Initiative, which utilizes sensors on buoys and other platforms to measure the scientific properties of the ocean from seafloor to surface.

Other NSF-wide investments to decrease

NSF is planning to ramp down other agency-wide investments that fall outside the big ideas. The $56 million Innovations at the Nexus of Food, Energy, and Water (INFEWS) program, which focuses on understanding how complex, coupled Earth processes and systems function, would wind down with a 71 percent cut. The $160 million Understanding the Brain program, which includes NSF’s contributions to the interagency BRAIN Initiative focused on mapping and understanding the neural pathways of the human brain, would drop by 19 percent.

Innovation Corps (I-Corps), which promotes university-based entrepreneurship and aims to accelerate the translation of scientific and engineering discoveries into technology and products, would be kept steady at $30 million.

Like last year, the request would more than halve the Major Research Equipment and Facilities Construction (MREFC) account, from $223 million in fiscal year 2017 to $95 million. The decrease is due in part to the National Ecological Observatory Network (NEON) project’s transition out of MREFC and into operations within the Biological Sciences Directorate in fiscal year 2018, and the lack of a similarly large project to ramp up in its place. NSF is also sticking with the decision made in last year’s budget request to limit the Regional Class Research Vessels project to the construction of two rather than three research vessels.

DKIST and LSST telescope construction. NSF would continue to provide funds to keep the Daniel K. Inouye Solar Telescope (DKIST) and Large Synoptic Survey Telescope (LSST) projects on track for completion. NSF reports fiscal year 2019 will be the final year of construction for DKIST, which is being built at the highest point on the island of Maui in Hawaii. When complete, it will be the world’s most powerful solar observatory. LSST, a wide-field optical telescope being built in Chile, is scheduled to remain under construction through fiscal year 2022.

Antarctic Infrastructure Modernization for Science. Within the Office of Polar Programs (OPP), which is the primary U.S. funder of fundamental research in the Earth’s polar regions, the proposal includes a boost in infrastructure spending, including $104 million for a new Antarctic Infrastructure Modernization for Science (AIMS) project to replace facilities at McMurdo Station. Designed to meet anticipated science support needs for the next 30 to 50 years, NSF says AIMS will enable a range of “critical scientific research capabilities such as nuclear test detection, earthquake monitoring, and real-time weather data ingestion for global forecasting.” Although not technically an MREFC project, AIMS will be a major multi-year construction project expected to exceed a total cost of $350 million and will expand the budget footprint of OPP for at least five years.

Mid-scale research infrastructure. As NSF’s support for large-scale construction falls, the foundation is investing in a new account for mid-scale infrastructure. NSF would provide $60 million in new funding through the Mid-scale Research Infrastructure big idea, which is aimed at “developing an agile process for funding experimental research capabilities in the mid-scale range, spanning the midscale gap in research infrastructure between the $4 million cap on NSF’s Major Research Instrumentation program and the $70 million lower bound for projects supported by NSF’s Major Research Equipment and Facilities Construction account.”

NSF plans to close the three overseas offices it currently operates in Beijing, Brussels, and Tokyo, by the beginning of fiscal year 2019. The Office of International Science and Engineering, which currently manages the overseas offices, will “transition international engagement to a new model that allows NSF to expand its outreach and cooperation around the globe.” NSF explains that the new approach will allow it to undertake “short-term expeditions” to explore new opportunities for collaboration.