National Science Foundation leaders presented their plan for breaking down the agency’s disciplinary stovepipes at a House hearing on its budget request for fiscal year 2019. The chairwoman of the National Science Board also warned that China could soon surpass the U.S. as the world’s S&T leader if current trends continue.

The House Science Committee met on March 15 to review the Trump administration’s fiscal year 2019 budget request for the National Science Foundation. The budget would maintain NSF’s overall funding near the current level of $7.5 billion.

For the first time, NSF is requesting dedicated funding for each of its “10 Big Ideas,” most of which are meant to encourage cross-disciplinary inquiry that draws on expertise from two or more of the agency’s six research directorates. Given the flat funding, NSF had to reduce support for “core” disciplinary research to free up resources to launch the Big Ideas.

A few Democratic committee members applauded the spirit of the proposal, but also expressed concerns about potential harms to core disciplinary research. No Republican members directly weighed in on the subject.

‘NSF is not going to play it safe’

NSF Director France Córdova’s testimony summarized how the budget would distribute $342.5 million across the Big Ideas. The six research-focused big ideas would each receive $30 million through the research directorates, although the funding will be overseen by multi-directorate teams. Two of the six would also each receive an additional $30 million through new “convergence accelerators.”

The four process-focused ideas would receive varying amounts: $60 million for Mid-scale Research Infrastructure; $20 million for INCLUDES, an initiative to broaden participation in STEM; $16 million for Growing Convergence Research to support projects that transcend the Big Ideas; and $6.5 million for the 2026 Fund, which will "initiate mechanisms to catalyze new research areas that may become future research Big Ideas."

Maria Zuber, the chair of NSF’s governing board and vice president for research at MIT, elaborated on the rationale for the new funding approach, saying,

In such difficult [budget] times, there can be a tendency to play it safe. But as America’s innovation agency, NSF is not going to play it safe. … NSF proposes to break out of academic silos by investing in new elements to promote cutting-edge interdisciplinary research at the frontiers of science and technology. ... Much transformative research happens at the intersection of scientific fields. The board believes this proactive approach is essential if NSF is to succeed in its mission to advance the frontiers of science.

Committee Ranking Member Eddie Bernice Johnson (D-TX) applauded this vision in her opening statement, but said the tradeoff of reduced funding for core programs needs further discussion “before we can be comfortable that the benefits outweigh the potential harm.” Rep. Dan Lipinski (D-IL), the top Democrat on the Research and Technology Subcommittee, also expressed reservations in a written statement:

Convergence initiatives have the potential to amplify the impact of research in the core disciplines. But if we scale back directorate funding, we risk eroding the disciplinary expertise that must come together to make convergence research successful.

At a time when we have allowed NSF’s purchasing power to decline with years of flat funding, and when we have significant additional budgetary authority available, now is a critical time to increase the NSF budget. At a bare minimum, we should be making inflationary increases to all research directorates, and should not force funds for the 10 Big Ideas to come at the expense of disciplinary research.

At several points in the hearing, Córdova and Zuber noted that NSF is presently unable to fund about $4 billion worth of highly rated proposals each year. 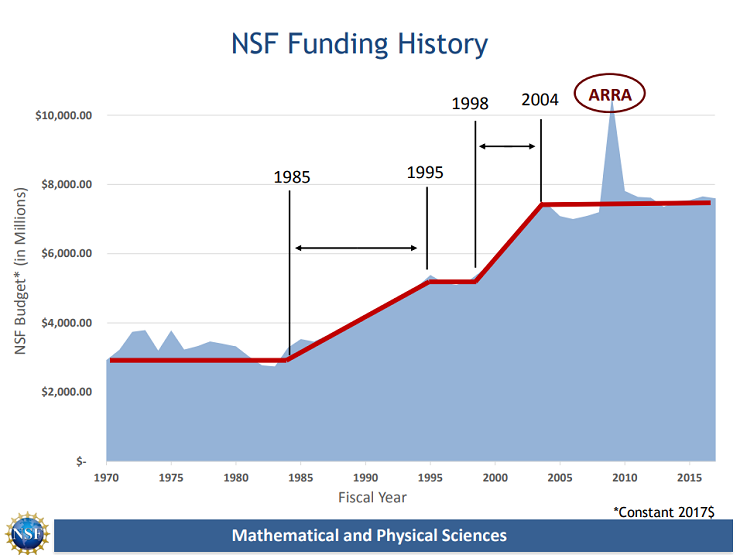 Excluding stimulus funding provided by the 2009 American Recovery and Reinvestment Act, NSF’s budget has been largely flat in constant dollars over the past decade.

Committee Chair Lamar Smith (R-TX) said in his opening statement that he believes NSF has improved its grantmaking practices in recent years, but also asserted that too many projects funded by the Social, Behavioral, and Economic Sciences (SBE) Directorate are unworthy of taxpayer support.

As he has done in the past, he listed several individual SBE grants he views as examples of wasteful projects. While acknowledging that social sciences contribute to addressing national challenges, he argued the U.S. should be spending more on disciplines such as physics and computer science, especially in light of growing investments in these fields by China.

“When only one out of five requests for grants is being funded, there must be priorities. We cannot afford to misspend another dollar on low-priority or frivolous activities,” Smith said.

Democratic committee members defended SBE and criticized the requested cut of about 10 percent to its budget. As the budgets for the other research directorates would remain steady under the proposal, Johnson remarked, “I do not doubt this steep cut was dictated from the White House.”

Several Democrats asked the witnesses to comment on the value of SBE research. In response, Córdova cited a recent National Academies study on the subject and noted that NSF intends for SBE to participate in several of the Big Ideas.

‘If we do not lead the global S&T enterprise, China will.’

Zuber focused much of her testimony on summarizing findings from the National Science Board’s latest biennial report that benchmarks the U.S. science and engineering enterprise with those of other nations.

"For the first time in over a half century, U.S. S&T leadership is threatened," Zuber warned. "As we look at the world in 2018, we find ourselves at an ‘all hands on deck’ moment. If we do not lead the global science and technology enterprise, China will."

She noted that the board recently issued a statement highlighting that if current spending trajectories hold, China will pass the U.S. in total R&D expenditures sometime this year. 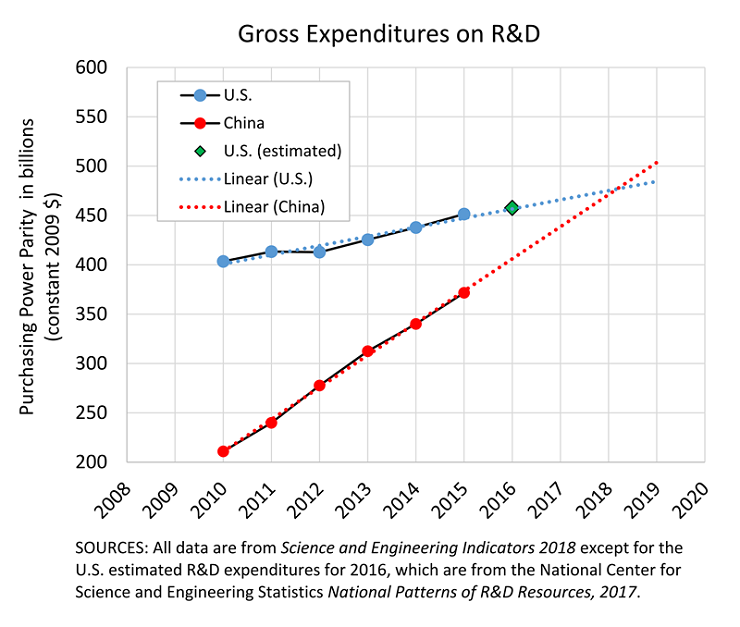 Smith asked about China’s plans to invest heavily in quantum science, remarking, “China is reportedly investing $10 billion in quantum research, far more than the United States. How can the U.S. stay competitive, and isn’t that a threat and a danger for China to keep outspending us in so many of these research areas?”

In response, Zuber noted the relevance of quantum research to national security and said that those in the classified realm should be in communication with those performing basic research. She also said the U.S. should consider changes to the education system, noting that even MIT does not have a quantum engineering program. Smith encouraged her to consider pushing for MIT to create one.

The Trump administration had been poised to propose a 30 percent cut to NSF for fiscal year 2019, but it added back $2.2 billion in a last-minute addendum. Córdova largely avoided discussing the original proposal at the hearing.

However, a recent presentation to an advisory committee by Anne Kinney, the head of NSF’s Mathematical and Physical Sciences Directorate, offered insight into how the agency prepared for such a budget and how it allocated the restored funds.

“When we produced our lower level budget, it was like the tide going out. And when it came in it did not fill exactly the same tidal pools that had been filled before,” Kinney said. “There were some requests from [the White House Office of Management and Budget], and there are a number of things NSF really wanted to be doing, including the Big Ideas.”

Describing the eleventh hour reversal of the cut, she said,

We got a reprieve at the last minute. Literally at the last minute, 2:46 in the afternoon before the Friday when the budget was becoming real. And, you know, thank heavens, because the list of things we were going to have to severely decrease was very long.

And so let me just segue into an earnest request to all scientists who perform science based on NSF funding. Please when you talk about your science, talk about NSF. … Our science is performed on the goodwill of the U.S. taxpayer, and if we are unknown entities, that goodwill will disappear.

Note: The initial version of this article incorrectly stated that the Growing Convergence Research funding would be used to incubate future Big Ideas. That is a purpose of the NSF 2026 Fund.