At an April 11 hearing, House Science Committee leaders expressed deep concern about the scope of foreign espionage campaigns targeted at U.S. academic institutions and sought advice on how to implement countermeasures while maintaining an open research enterprise.

The House Science Committee held a joint subcommittee hearing on April 11 to examine the scope of foreign nations’ efforts to exploit or outright steal the fruits of R&D conducted at U.S. academic institutions. Both Republican and Democratic committee members agreed that such espionage efforts warrant serious concern and stressed that countermeasures should balance strengthening security safeguards with maintaining an open research environment and continuing to welcome international scholars.

U.S. government officials have long been concerned about foreign targeting of R&D, but recent developments have given the issue new prominence. Last month, the Department of Justice accused nine Iranian citizens of hacking into computer systems of universities and companies around the world to steal academic intellectual property. The department estimates the hackers took about $3.4 billion worth of research data, documents, and other intellectual property from over 140 U.S. universities.

Separately, tensions between the U.S. and China over the latter’s allegedly systematic efforts to acquire U.S. technical know-how through legal and illegal means have escalated. In part in retaliation for these activities, detailed in an investigative report released last month by the U.S. Trade Representative, President Trump has threatened to impose an additional 25 percent duty charge on about $50 billion worth of imports from China, with many of the tariffs targeted on advanced technologies. Tariffs on another $100 billion worth of imports are also under consideration. 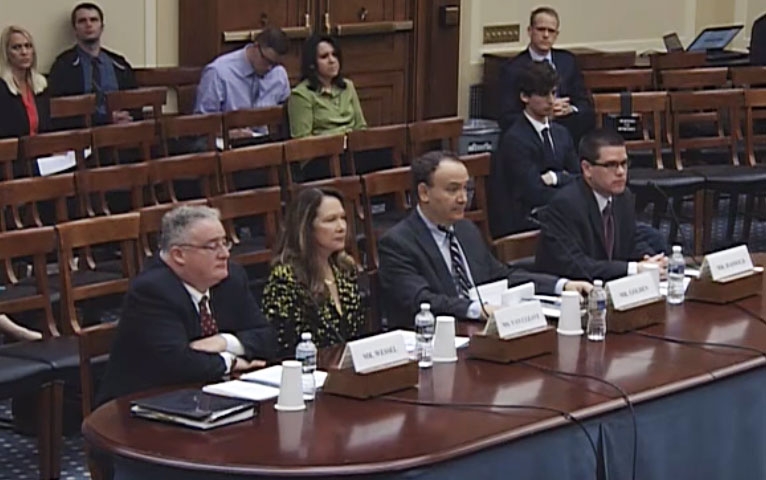 “In recent months, the public has become aware that we are under attack from foreign governments that want to steal our technological secrets and scientific discoveries and use them for their own purposes," said Committee Chair Lamar Smith (R-TX) at the outset of his opening statement. After pointing to the Iranian hacker indictment, Smith pivoted his focus to China, saying it has “actively and aggressively” targeted R&D at U.S. academic institutions for years.

Similarly, Oversight Subcommittee Chair Ralph Abraham (R-LA) said China has been the “most aggressive” country in this respect, but stressed, “I want to be clear that this committee is very concerned about all foreign nations and agents that are inappropriately attempting to take advantage of American R&D.”

Smith remarked that, although the intelligence community has long warned of these threats,

Many in academia have been unwilling to accept reality and unwilling to take any defensive measures to protect their researchers’ work, their universities’ scientific assets, and taxpayers’ investments.

He concluded with a call for improving cybersecurity, educating researchers about espionage threats, and further screening foreign students seeking to study in the U.S. while also “maintain[ing] the open and collaborative nature” of academic R&D.

Research and Technology Subcommittee Chair Barbara Comstock (R-VA) touched on similar themes, saying that academic institutions “cannot be blinded by naiveté or ignorance when distinguishing between friend and foe.” She continued,

But to be clear, the solution is not to shutter the doors of American universities and colleges to students, researchers, and professors from foreign nations. The vast majority of scholars who come to the U.S. do so to work with our citizens on scientific discoveries and breakthroughs based on an open exchange of ideas to benefit the world. Finding an appropriate balance between scientific openness and security concerns is not new, nor is it easy.

Committee Ranking Member Eddie Bernice Johnson (D-TX) likewise said in her opening statement that “we need to be careful that any security measures do not stifle the benefits our country realizes from legitimate international academic collaboration.” Johnson stressed the degree to which America has benefited from this flow of people, saying that between 1960 and 2017 immigrants to the U.S. have won 81 Nobel Prizes in Physics, Chemistry, and Medicine.

Oversight Subcommittee Ranking Member Don Beyer (D-VA) suggested that concerns about academia being naïve to the threats may be overstated. As evidence of academia addressing the issue, Beyer pointed to existing programs such as the Research and Education Networking Information Sharing and Analysis Center (REN-ISAC) and the Higher Education Information Security Council, which help respond to cyber intrusions and develop security best practices.

He also referenced a letter sent to the committee by several higher education associations expressing disappointment with the FBI’s decision this February to disband the National Security Higher Education Board, a high-level body launched in 2005 to improve mutual understanding between the bureau and academia. The FBI has indicated it is considering creating new advisory groups for academia. Beyer and Johnson called on the law enforcement and intelligence communities to increase their outreach to academia.

Democratic members also highlighted how long-term financial pressures on higher education institutions such as declining state support and stagnant R&D budgets have made them more reliant on international students, who often pay full tuition, as well as more willing to accept funds from foreign organizations.

Michelle Van Cleave, who was a top counterintelligence official in the George W. Bush administration, stated that America’s openness makes it a “spies’ paradise” and that Russia and China are systematically targeting certain technologies. Recalling how she made similar points at a similar hearing on espionage the committee held in 2013, Van Cleave again argued the U.S. government should think more strategically about how to use offensive methods to gain insight into foreign nations’ priority targets rather than mostly focusing on defensive measures.

Asked about the scale of damage caused by espionage, she cited a 2017 report that estimated the annual cost to the U.S. economy from intellectual property theft to be between $225 billion and $600 billion. She compared these figures with the $510 billion the U.S. is estimated to have spent in total on R&D in 2016.

Since much of this R&D is financed by the government, Oversight Subcommittee Vice Chair Clay Higgins (R-LA) commented that if it is stolen, U.S. taxpayers are in effect financing the R&D of other nations. Accordingly, he argued that federal science agencies should assess institutions’ intellectual property protection policies as part of their grant review processes.

Asked about the adequacy of the U.S. government response, he asserted that a 2015 agreement struck by President Obama and Chinese President Xi Jinping to curb cybertheft of U.S. intellectual property has proven ineffective. He added that there has not been adequate follow-on action to a 2014 indictment of five Chinese military hackers for economic espionage.

He also stressed that R&D competition should not be viewed as a “zero-sum game” where advancements by one nation always detract from others, and warned that responses to China’s actions must not engender broad targeting of Chinese citizens or people of Chinese descent.

Daniel Golden, author of a recent book on foreign and domestic espionage at U.S. universities, stated that academia is a “valuable, vulnerable, and low-risk target” and that a “small but significant” fraction of foreign students and faculty engage in espionage.

He also observed that not all R&D exploitation is necessarily done at the behest of foreign governments, noting the gray area posed by researchers who take basic research know-how back to their home countries. Golden recounted the case of a Chinese graduate student who allegedly exploited a meta-materials research project he was part of at Duke University and started a competing institute in China.

Golden concluded that although the student was likely “poaching the research for his own benefit, rather than for Chinese intelligence,” the case is emblematic of how China’s “brain gain” initiatives such as the Thousand Talents Program and Project 111, which incentivize researchers to work in China, facilitate such transfers of knowledge.

Rep. Suzanne Bonamici (D-OR) asked Golden to elaborate on his reaction to FBI Director Christopher Wray’s recent remarks to Congress expressing concern about espionage risks posed by Chinese students. Golden replied that he believes the benefits of the globalization of higher education outweigh the drawbacks and said that China has a legitimate interest in trying to recover top talent who left to study and work in the U.S.

“I think it would be a mistake to turn off the faucet of bringing Chinese students to this country,” he concluded.