Academies Panel to Delve Into Critical Questions Facing US R&D

A new National Academies study will consider the challenges the U.S. is facing in maintaining its global leadership position in science and technology. It will encompass such matters as protecting research from exploitation, managing international exchanges, and promoting domestic technology commercialization. 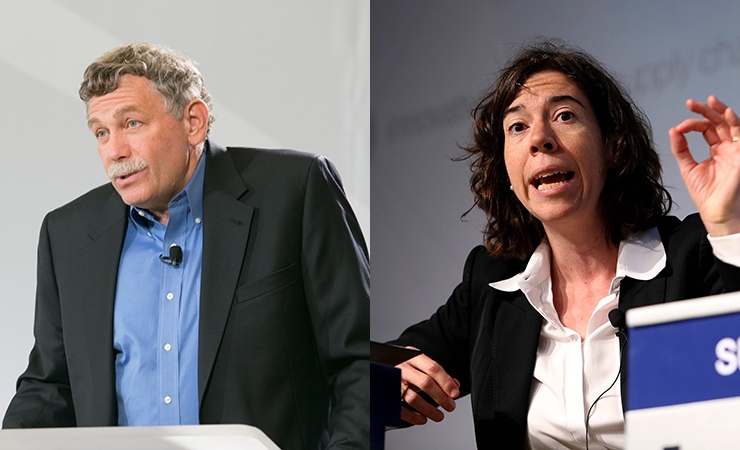 Eric Lander and Erica Fuchs are chairing a new National Academies study on U.S. global leadership in science and technology.

A new National Academies study committee met for the first time last month to tackle an unusually ambitious charge: to examine the challenges the U.S. faces in maintaining its global leadership position in science and technology.

At the meeting, the committee heard from representatives of the four federal sponsors of the study: the Office of the Under Secretary of Defense for Research and Engineering, the Defense Advanced Research Projects Agency, the National Science Foundation, and the National Institute of Standards and Technology. They explained they are confronting difficult questions surrounding matters such as international research collaborations and technology commercialization. They also expressed considerable interest in the implications of rising competition from China and how best to respond to that nation's strategies for leveraging R&D to its own advantage.

The study is scheduled to last about two years and will include a series of public workshops. It is being led by Erica Fuchs, a professor of engineering and public policy at Carnegie Mellon University, and Eric Lander, a geneticist and president of the Broad Institute at MIT and Harvard University, who served as co-chair of the President’s Council of Advisors on Science and Technology under President Obama.

As it progresses, the study is apt to gain a high profile. Aside from Fuchs and Lander, the study committee includes such figures as former senator Jeff Bingaman (D-NM), who engaged extensively with science and technology issues while in Congress, and former Stanford University President John Hennessy, who is currently executive chairman of Google parent company Alphabet. This month, former Defense Secretary Ash Carter joined as well.

At the kickoff meeting, the sponsoring agency representatives said they want the committee to lend new precision to deliberations over a variety pressing strategic questions.

DOD official Kristopher Gardner outlined issues facing the department’s Strategic Technology Protection and Exploitation office, where he works. He said that, while DOD is actively working to protect intellectual property surrounding major technology systems, it is less certain about what to do concerning emerging technologies, startup companies, and academic research. He remarked,

Great ideas come out of many of our universities, but we don’t have the infrastructure within our enterprise to actually retain them and build them up. So, what’s happening is venture capital is coming in — and potentially not even U.S. venture capital — to fund their advances. But then that also funds the IP back to other places, not necessarily for the U.S.’ interests.

Asked by Bingaman whether it follows that the government should do more to support commercialization, Gardner said DOD regards itself as playing a “role” in the defense sector but was reluctant to answer on behalf of other parts of the government.

Conversing with the committee, Gardner also pointed to other problems of interest. These included the requirement that foreign researchers visiting on J-1 visas return to their home countries, as well as recent congressional direction that DOD build up a capacity to, in Gardner’s words, “screen and vet” the academic researchers it funds. He said, though, the department has not been able to gather relevant “quantitative data” in the academic sphere.

Asked generally by Fuchs about the technological expertise within his office, including through advisory panels, Gardner suggested the study will be its source of such advice.

Discussing expectations for the committee from a different angle, NSF Science of Science Program Director Cassidy Sugimoto said her agency wants to ensure it makes strong use of the “vast body of evidence” that has been collected by others. She noted how statistics already gathered by NSF illustrate China’s emerging global R&D leadership, measured in terms such as its surpassing the U.S. in bachelor’s degrees awarded in STEM fields, doctoral students, and publication volume, as well as its newly “disproportionate share” of top-cited publications.

Nuance sought in confronting decisions about openness and leadership

Sugimoto cautioned, though, that the “metaphor of national competitiveness is itself problematic.” She observed, “We know that internationally collaborative works receive higher citations than those written with only domestic coauthors. We also know that a large share of our own doctoral graduates are themselves foreign-born. We benefit in terms of recruitment of the top scientific talent from across the world.”

Continuing, Sugimoto said NSF acknowledges agencies are facing “security threats,” and “particularly those that bring up the asymmetries of scientific exchange and the exchange of scientific knowledge.” In addressing how such exchanges should be managed to protect national interests, she encouraged the committee to recognize there is also considerable asymmetry within domestic R&D. She noted that although publication dominates academic research, other sectors employ other mechanisms, remarking,

I think the policy framework around access, and I think a lot of what this committee should talk about is that open versus closed, it’s not a simple valve that you turn on and you turn off.

Representing DARPA, Richard-Duane Chambers, who is working on the agency’s Electronics Resurgence Initiative, said he hopes the committee’s study would serve as a guide for university leaders as well as policymakers, remarking,

They don’t necessarily have insights into all those threats and exactly where the line is. ‘How much can I do as a university when I’m collaborating with overseas partners? What’s safe? What is the government going to consider safe?’ And that’s certainly something where I think a body like the National Academies can really help to shape that conversation.

Chambers also said DARPA would like the committee’s assessment of whether the U.S. is indeed falling behind in various “critical areas of interest,” as well as the potential implications of falling behind for national security. He remarked, “I assume there’s going to be some areas where we might say, ‘All right, we’re not going to be the leader there, but we don’t have to.’”

Picking up on this point, Lander said a “caricature economist” would argue it is irrelevant where things are invented because they can be acquired on the market. He went on, “There’s a spectrum of answers as to why that isn’t completely true, and it would be helpful to maybe talk to DARPA about taxonomizing what are the whole series of exceptions to that kind of general economic dictum.”

Leveraging R&D to boost industry also on the agenda 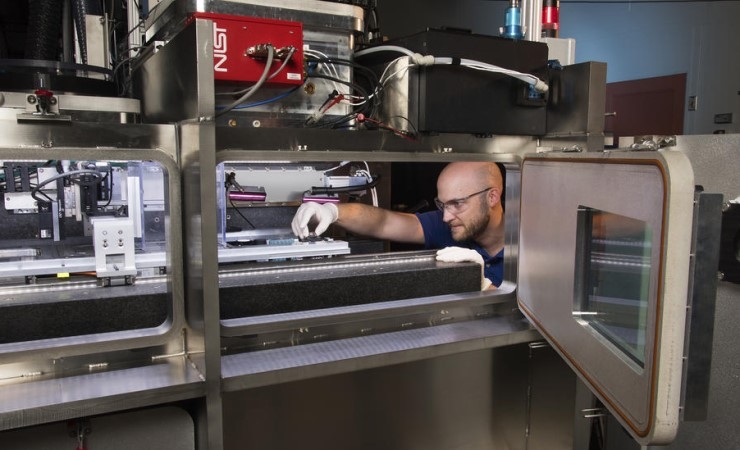 The Additive Manufacturing Metrology Testbed at the National Institute of Standards and Technology serves the agency’s efforts to assist U.S. industry in adopting new advanced manufacturing methods. NIST is one of the federal sponsors of the new National Academies study.

Outlining the broad approaches agencies can take to international challenges, Chambers said limiting rivals’ access to U.S. technologies is one option, though he noted that steps such as extending the reach of classification can harm U.S. R&D. He also observed that China has already adapted to measures such as the U.S.’ imposition of tighter controls on foreign investment.

Another option, he said, is to “run faster” than rivals by undertaking focused R&D efforts and assisting in technology commercialization, which he said reflects the approach DOD is taking with its new “transition accelerator” program.

Hennessy, Alphabet’s executive chairman, asserted that DARPA and other federal agencies had played a key role in turning back Japanese attempts to dominate the semiconductor and computer industry in the 1980s. However, noting the aggressiveness of China’s strategies and the “scale and scope” of its efforts, he questioned whether a “run faster” strategy would be sufficient to meet the current challenge.

Mike Molnar, who leads NIST’s Office of Advanced Manufacturing, stressed in his presentation that China is making a concerted effort to build industries around emerging technologies through its “Made in China 2025” plan. He said it is on track to meets its goal of establishing 40 manufacturing innovation institutes by 2025 and that it is using them to build up new industrial clusters.

Molnar noted that the U.S. does not share China’s commitment to having an industrial policy. Commenting on how private capital functions in U.S. R&D, he argued it is currently focused on biotechnology and information technology and pays relatively little attention to manufacturing. He suggested the committee might look at how barriers to private investment might be hindering innovation.

Molnar also extolled the Manufacturing USA network of 14 public-private advanced manufacturing institutes as catalysts for the development of new industries. Suggesting a “starting point” for the committee’s investigation of how the government could better promote new industries, he pointed to the four “industries of the future” — artificial intelligence, quantum information science, 5G telecommunications, and advanced manufacturing — that the Trump administration has identified as priority areas.

The committee has not yet announced its next meeting. However, public comments are already being solicited through a partnership between the National Academies’ New Voices in Science, Engineering, and Medicine program and the Federation of American Scientists.

(Disclosure: FYI has a pending grant application with NSF’s Science of Science program.)