NASA’s Office of Inspector General (OIG) released a report on May 29 that presents serious criticisms of the agency’s plans for two multi-billion-dollar missions to Jupiter’s moon Europa. The first, the Europa Clipper, is to make more than 40 flybys of the moon and is mandated by law to launch in 2023. However, OIG concludes it faces several budget and schedule risks. A follow-on lander mission faces an even rockier path, and OIG deems the goal of launching it in 2025 “not feasible.” OIG announced yesterday it is starting an audit of NASA’s management of its planetary science portfolio as a whole.

The aggressive plans for the Europa missions stem largely from the intense interest taken in them by Rep. John Culberson (R-TX), who chaired the House appropriations subcommittee for NASA from 2014 until his defeat in last year’s election. Optimistic that the missions would find evidence of life in the ocean beneath Europa’s icy crust, he pushed for not only generous funding for them but also statutory language mandating their launch dates and their use of NASA’s powerful Space Launch System (SLS) rockets, which are still in development. House appropriators have retained that language in their latest NASA spending proposal, even in Culberson’s absence.

The problems now facing the Clipper and lander are only the latest to afflict NASA’s largest-scale science missions, which tend to attract the most congressional interest and oversight. On May 30, the Government Accountability Office, Congress’ auditing arm, released its annual report on NASA’s most expensive projects, warning of various risks that could undermine Congress’ attempts to control their costs and schedule performance.

NASA’s Jet Propulsion Laboratory (JPL) has been developing the Clipper for several years, and the mission is about to transition into its implementation phase, when spacecraft assembly begins in earnest. The mission is funded at $545 million in the current fiscal year and is projected to cost between $3.1 billion and $4 billion in total.

According to OIG, although robust funding has enabled equipment to be matured early in the mission development cycle, JPL’s Clipper management team was given insufficient time to assess proposed instruments. In OIG’s view, with more time the team might have been able to head off design problems and scrutinize cost proposals that proved to be “far too optimistic.”

After cost projections rose across the board early in development, OIG notes that NASA agreed to implement a cost monitoring process that could swiftly trigger a descoping review for troubled instruments. Earlier this year, NASA used that process when it decided to replace the Clipper’s ICEMAG instrument with a simpler magnetometer after its projected cost rose above $45 million. 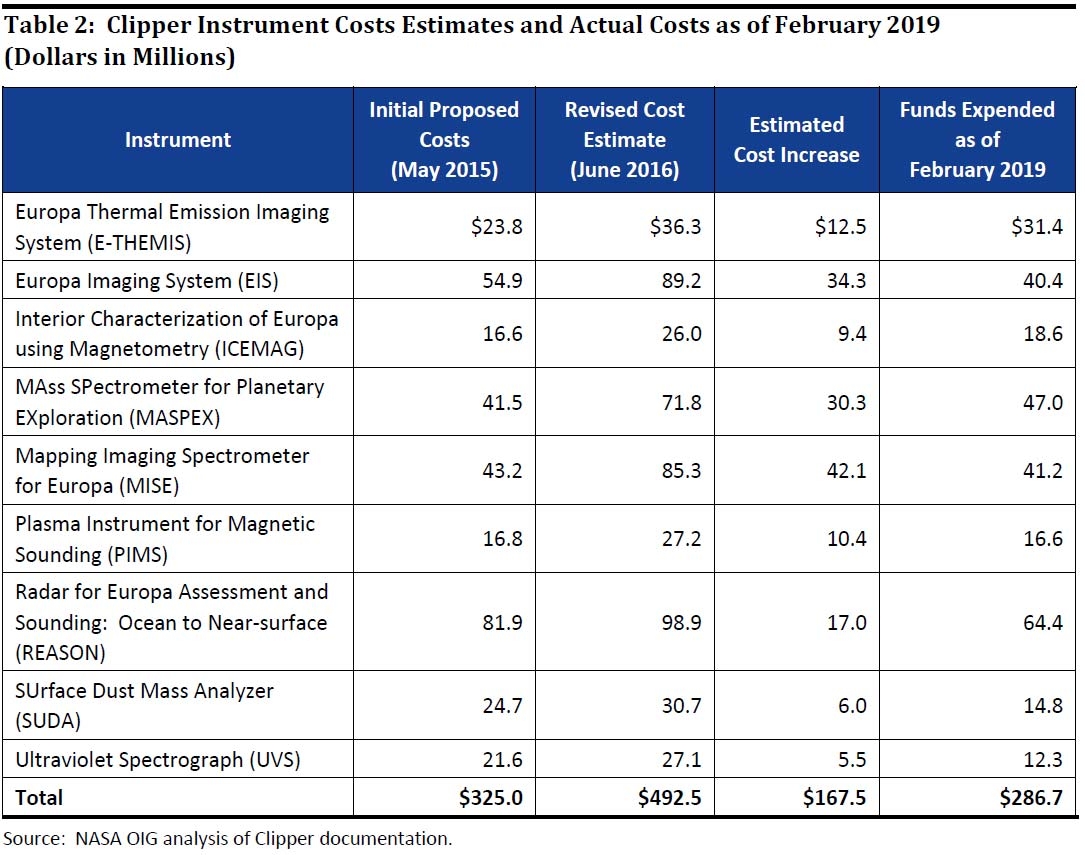 Personnel shortages have been a persistent problem for the Clipper, which OIG attributes to JPL’s simultaneous commitment to five major projects, including the flagship Mars 2020 rover. OIG criticizes JPL’s practice of switching personnel between projects based on the urgency of the need for them, stating, “Given this ‘robbing Peter to pay Paul’ approach to filling critical staff vacancies, we are concerned that JPL will be unable to adequately supplement the project’s workforce with the required critical skills at critical periods in the mission’s development cycle.”

OIG also casts doubt on the congressional mandate to launch using an SLS rocket, which is intended to reduce the flight time to Europa by years. Given the SLS program’s current development and flight schedule, the office points out NASA would have had to order a rocket for the Clipper last year for a 2023 launch. While NASA has proposed using an alternative launch vehicle, OIG states the mission team has had to accommodate congressional direction to use SLS, and that the resulting indeterminacy in design “creates added risks and uncertainties for an already challenging project.”

In general, OIG concludes that the “interdependent risks” facing the Clipper must be addressed before a “realistic” launch date can be set. It further warns that an escalation of costs resulting from those risks could force NASA to divert funds from its other planetary science missions. Noting that almost $2 billion remains to be spent on the project, OIG also highlights the danger that congressional support could dwindle, particularly in view of the departure of “the mission’s most important congressional supporter.”

Although Congress allocated $195 million in the current fiscal year for a Europa lander, NASA has yet to formally establish it as a mission. OIG notes that even if the lander had been approved by early this year, it could have launched no earlier than 2026, assuming an aggressive development schedule.

Were the project to move ahead, the office observes that it would stretch JPL’s staff even further, exacerbating the risk of delay. Furthermore, it points out that the lander’s anticipated heft will require the use of an advanced version of the SLS that is “highly unlikely” to be available in 2025. 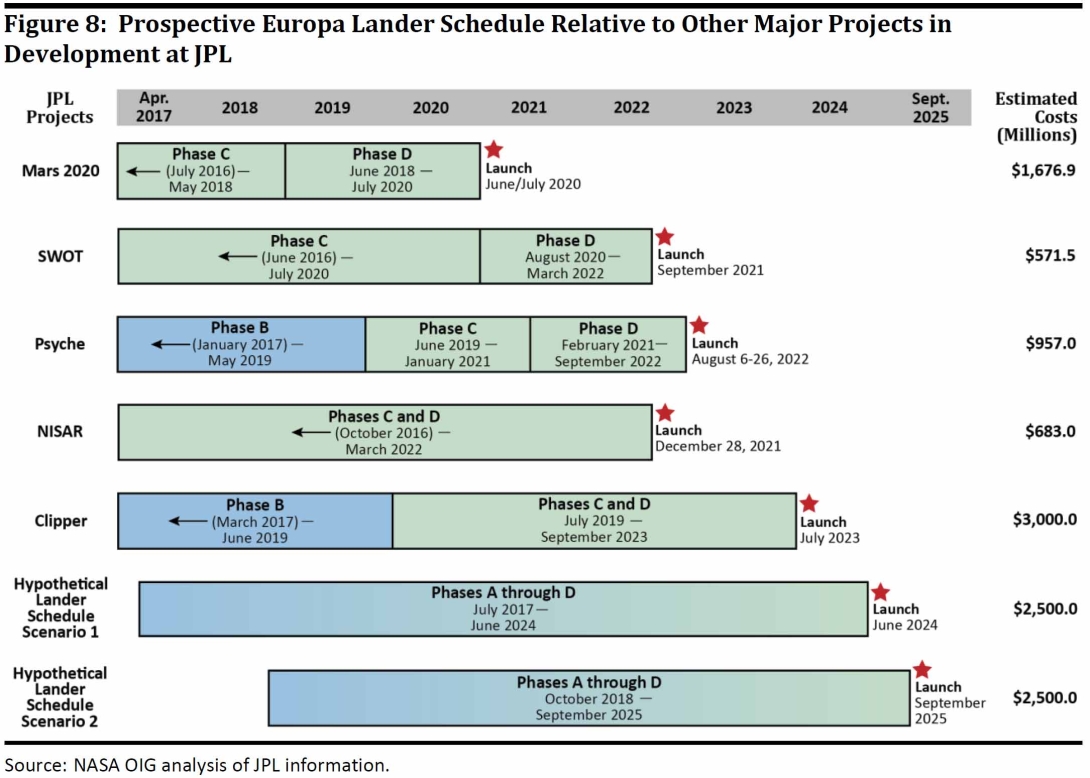 Beyond the practical barriers to the mission, OIG states that the lander mission was not identified as a priority by the most recent National Academies decadal survey. Given its anticipated expense, the office argues it would siphon resources from higher priority missions. Moreover, it notes that the current timetable would not permit the lander development team to take full advantage of data collected by the Clipper.

The Trump administration has already proposed canceling the lander, and NASA’s response to the OIG report notes it is now planning on a launch “no earlier than 2030.” The agency indicates it is using available funding to conduct technology development work and that JPL has already reassigned “nearly all” of the lander’s flight development personnel to other projects.

However, the mission’s fate remains up in the air. While House appropriators have proposed the lander receive no new funding, they state its current appropriation should be enough to cover next year’s expenses and that it remains a “priority.” Senate appropriators have yet to release their counterpart proposal.

GAO warns of risks to other flagship missions

Although lawmakers are broadly supportive of NASA’s work, they also keep close tabs on its project management. Directed by Congress, GAO has now been annually reviewing NASA’s performance on its most expensive projects for a decade. While the office charted significant improvement from 2012 to 2017, delays and cost overruns have ballooned since then.

GAO observes that the most recent deterioration owes to last year’s delay in the launch of the James Webb Space Telescope, which led to Congress raising the cost cap it placed on the project in 2011. While finding the mission is still on track to launch in 2021, GAO states it has already used up three months of its revised schedule reserve and remains vulnerable to further delays.

Similarly, GAO warns that as the Mars 2020 mission approaches launch, technical problems with its instruments could cause a “ripple effect” that would delay the entire project. The office notes that these problems have already led to a cost increase, as NASA revealed earlier this year, but neither GAO nor the agency have specified how much the increase will be. If it exceeds 15% of the mission’s total cost, by statute NASA must formally notify Congress and initiate a mission replanning process. A NASA spokesperson told FYI there has not been an "official declaration of [a] 15% percent [overrun] at this time," and that the agency "will endeavor to ensure the project has sufficient funding to guard against programmatically disruptive delays entering the next fiscal year."

GAO points out that NASA has proactively descoped the Wide Field Infrared Survey Telescope (WFIRST) to keep the project within the $3.2 billion cost cap that Congress has placed on it. However, that cap is at the lower end of current cost projections and the mission has yet to pass the preliminary design review milestone that will establish its baseline cost. As with the Europa missions, Congress has also set specific requirements for WFIRST, including incorporating a coronagraph in its design and making the telescope compatible for use with a starshade.

In general, GAO points out a tension between NASA’s increasing commitments to major projects and the availability of resources, which has led it to propose cancelling missions such as WFIRST. However, Congress has to date proven unwilling to accept these tradeoffs. GAO reports, “Agency officials stated that they have difficulty managing the portfolio of major projects — particularly in conducting longer range planning — with continuing funding uncertainties.”