The National Science Foundation’s budget will increase 4 percent to $8.1 billion under the final spending legislation for fiscal year 2019. The measure provides funding for the agency’s proposed “Big Ideas” and facility construction projects, while also explicitly maintaining support for “core” research and existing infrastructure.

Appropriations legislation enacted last week increases the National Science Foundation’s budget for fiscal year 2019 by $308 million, a 4 percent increase, bringing it to just under $8.1 billion. The increase is targeted primarily to the agency’s main research and facility construction accounts, which will respectively receive $186 million and $113 million more than last year. 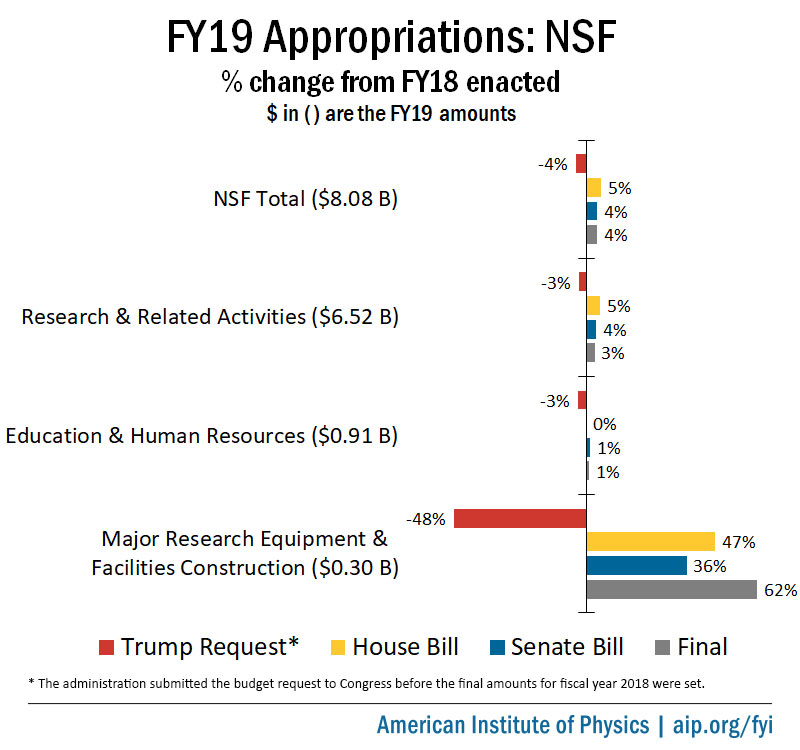 The legislation is accompanied by an explanatory statement containing policy and funding direction for the agency. Unless negated in the final statement, language from the reports that accompany the House and Senate’s original versions of the legislation is also valid. Tables detailing final funding levels for agency programs are available in FYI’s Federal Science Budget Tracker.

The R&RA account, which funds six research directorates and the Office of Integrative Activities, will rise 3 percent to $6.52 billion. The legislation does not provide any direction on how NSF should allocate funds between these directorates, though House report language states that “strategic investments in the physical sciences are vitally important for the United States to remain the global leader in innovation, productivity, economic growth, and good-paying jobs for the future.” In recent years, some lawmakers have unsuccessfully pushed NSF to redistribute funding away from the directorates dedicated to the geosciences and social sciences.

Congress backs ‘big ideas’ while protecting ‘core’ research. The House and Senate reports both endorse NSF’s “10 Big Ideas” concept, but do not specify funding amounts for them. NSF requested $343 million in total to implement the ideas. The Senate report expresses support for NSF using the ideas as a “focusing tool,” while also directing the agency to “maintain its core research at levels not less than those provided in fiscal year 2017.” The House report also recommends NSF use the Big Ideas framework to support mid-scale infrastructure for high energy laser technologies, citing their importance to “national defense, space exploration, and economic competitiveness.”

The House report includes more prescriptive language for the Astronomical Sciences Division, instructing NSF to maintain support for the division’s programs and facilities at “no less than the fiscal year 2018 levels to maintain full scientific and educational operations.” It also notes the legislation contains a provision that requires NSF to notify Congress in advance of “any planned divestment through transfer, decommissioning, termination, or deconstruction of any NSF-owned facilities or any NSF capital assets” with a value greater than $2.5 million. Over the past year, NSF has moved to divest from several of its astronomical observatories.

Callouts for advanced computing. Both reports identify advanced computing technologies as a critical investment area for NSF. The House directs the agency to provide Congress with a plan for modernizing its supercomputing facilities and to respond to a recent National Academies report on the subject. It further urges NSF to make “significant investments” in quantum computing. The Senate report likewise urges NSF to make “timely and significant investments in high-performance computing,” referencing artificial intelligence, storage, and quantum computing as key technology areas. It also recommends that NSF include a “well-funded budget line” in future budget requests that supports “world-class leadership computing for the national open science community.”

Intellectual property protection initiative. The House report directs NSF to work with the academic community to identify best practices for addressing “data security concerns, including intellectual property protection” in projects and facilities funded by the agency. NSF is instructed to consult with the Federal Bureau of Investigation and the National Institute of Standards and Technology as it undertakes this effort. The FBI has worked over the past year to raise awareness in academia about how intellectual property and sensitive data produced through federally funded research can be misappropriated by foreign actors.

The MREFC account, which funds construction and upgrades of major research facilities, will see its budget surge to just under $300 million, a 62 percent boost.

This increase largely is due to Congress providing MREFC funding for the first time to the Antarctic Infrastructure Modernization for Science (AIMS) project, which will revitalize NSF’s facilities at the McMurdo and Palmer Stations. The legislation provides the $104 million requested, but rejects NSF’s proposal to fund the project through the R&RA account. Congress is also providing funding well beyond the request for NSF to acquire three oceanographic research vessels. Meanwhile, funding for the Large Synoptic Survey Telescope in Chile and the Daniel K. Inouye Solar Telescope in Hawaii will decrease, in line with those facilities’ construction plans.

The EHR account, which funds a variety of fellowship programs as well as research on STEM education pedagogy, will increase 1 percent to $910 million. The final statement directs that $40 million go toward the recently launched Hispanic Serving Institutions program, which Congress specified $30 million for in the last fiscal year. Via Senate report language, NSF is directed to use these funds to “build capacity at institutions of higher education that typically do not receive high levels of NSF funding.” The Senate report also recommends that $20 million go toward the INCLUDES program, NSF’s marquee effort to broaden participation of underrepresented groups in STEM fields, matching the requested amount.