The National Institutes of Health’s budget would drop 12 percent to $34 billion under the Trump administration’s proposal for fiscal year 2020, rolling back most of the $5 billion increase Congress has provided to the agency over the past two years.

Funding for the National Institutes of Health would decline $4.7 billion, or 12 percent, to $34.4 billion under President Trump’s fiscal year 2020 budget request for the agency, close to the level proposed last year. Congress has flatly rejected the Trump administration’s proposals to cut funding for NIH over the past three years, instead providing multi-billion dollar increases each budget cycle. 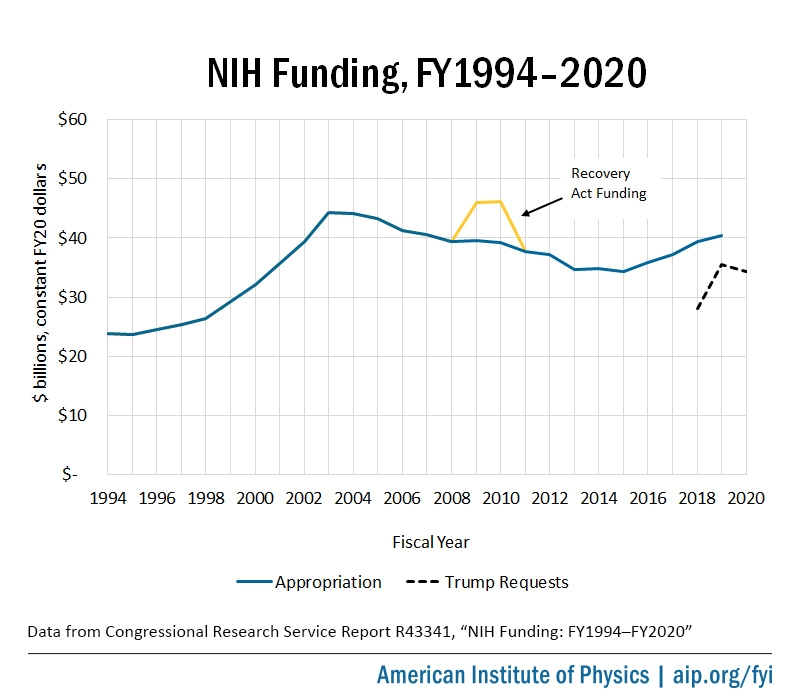 While NIH’s budget is at a historic high in current dollars, after adjusting for inflation it remains below the peak it reached in the early 2000s following a period of rapid growth. Click to enlarge.

Congress began to substantially grow the agency’s budget near the end of the Obama administration, and appropriators from both parties have suggested they would like to see the trend continue.

At a recent hearing on NIH’s budget request, House Appropriations Committee Chair Nita Lowey (D-NY) told a panel of senior agency officials, “I am going to work as hard as I can … to give you as much money as we can, because you have the brilliance, you have the commitment, and you have the determination. All you need is more money.” Senate Appropriations Committee Chair Richard Shelby (R-AL) expressed a similar sentiment at a hearing today on NIH’s budget. “I’m not interested in cutting your budget. I’m interested in increasing it,” he said.

Top appropriators have also argued that sustained increases are important for encouraging people to pursue careers in biomedical research. Rep. Tom Cole (R-OK) offered this rationale at a recent hearing, remarking,  “It’s very important, actually, for [students] to see a signal that this country is serious about biomedical research and intends to invest in it for a long time to come so that they can plan their careers accordingly and know that there’s going to be research dollars available.”

The proposed cuts for this year are spread evenly across NIH’s major research institutes, with most seeing decreases of around 14 percent overall. Details for selected institutes that fund physical science research can be found in FYI’s Federal Science Budget Tracker. Budget justifications for each of NIH’s institutes and centers are available here.

The administration once again proposes to cap the percentage of an investigator’s salary that can be covered by grant funds at 90 percent. In the “Major Savings and Reforms” appendix to the budget request, the administration states the cap would “enable available funding to be better targeted toward supporting the highest priority research on diseases that affect human health while making research institutes less reliant on federal dollars.”

Congress rejected the proposal last year, instead directing NIH to provide an analysis of its potential impacts in the next budget request. In response to this provision, NIH acknowledges, “No previous research examines the impact of reducing the salary cap on the number of grants and the average cost per grant.” In the absence of such studies, NIH references a past instance in which a reduction in its salary cap did not lead to a significant change in grant numbers or size.

The administration also reiterates its interest in modifying NIH’s reimbursement rates for facilities and administrative costs incurred by grantee institutions. Congress rebuked the administration for proposing to significantly restrict these rates in its first budget request for NIH, making it illegal for the agency to change them. This year, the administration asks Congress to repeal this prohibition so that NIH has “flexibility to support more direct research while encouraging research institutions to improve the efficiency of operations.”

Next Generation Researchers Initiative. Established in 2017 by the 21st Century Cures Act, the Next Generation Researchers Initiative aims to improve early-career researchers’ prospects for securing grant funding. In testimony today before Congress, NIH Director Francis Collins highlighted how the agency funded 1,287 early-career researchers in 2018, which he said is the highest number in history and more than double the amount supported in 2013. He also noted the budget includes $100 million for a dedicated fund that would “support early-stage investigators that have never been funded by an award or current NIH-supported researchers at risk of losing support.” The budget justification explains this funding is meant to “supplement efforts undertaken by the Institutes and Centers with their own appropriations.” NIH also notes it has encouraged the institutes and centers to prioritize funding for early career researchers and is “closely reviewing” recommendations made by a 2018 National Academies report on the biomedical research workforce.

Facility repairs. The base budget for facilities construction and repair would remain steady at $200 million under the request. NIH nevertheless notes its backlog of maintenance and repair projects now amounts to more than $1.8 billion and is “growing at an accelerating rate.” It also highlights that the National Academies is expected to release a report later this year on facility needs at NIH’s main campus in Bethesda, Maryland.

‘Transformational tools.’ NIH plans to continue prioritizing development of “transformational tools and technology,” citing areas such as gene editing, three-dimensional tissue printing, single cell biology, neurotechnology, and non-invasive imaging. One thrust of NIH’s tool development efforts has come through the BRAIN Initiative, a major effort launched in 2013 to map the human brain. Describing how the initiative is evolving near its midpoint, the budget justification states, “As new tools emerge from early BRAIN investments and pilot projects are maturing to larger scale data generation, NIH is focusing direct support to enhance tool dissemination and data sharing.” 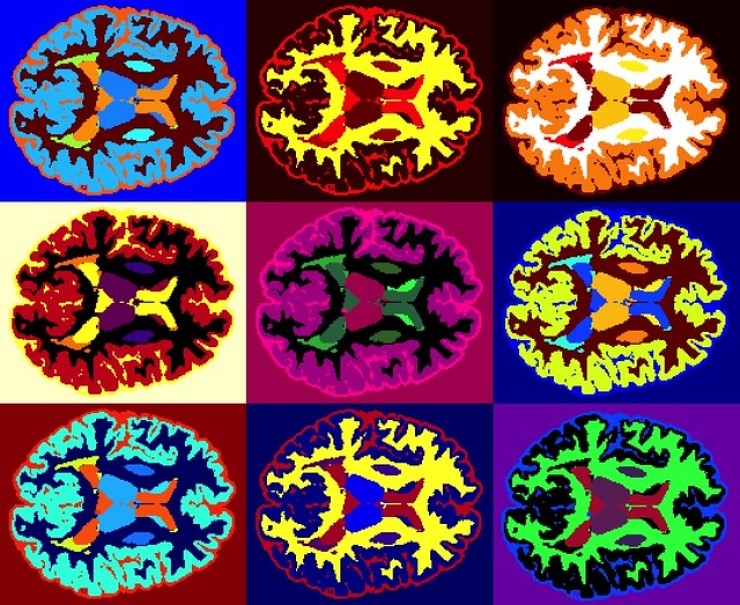 Axial MRI scans of a person with multiple sclerosis.

Big data. NIH also plans to accelerate implementation of its new Strategic Plan for Data Science and is creating a Chief Data Strategist position to oversee the effort. The budget justification further stresses NIH is committed to harnessing artificial intelligence and machine learning to advance basic and clinical research, noting that the agency has created a new advisory committee dedicated to the topic.

DOE collaboration. In response to congressional directives, the justification details ongoing and potential collaborations with the Department of Energy. In particular, Congress encouraged NIH to continue leveraging DOE’s high-performance computing facilities in cancer research and suggested it explore creating a heavy ion research center in partnership with the department to develop cancer treatments. NIH notes it is currently pursuing many fruitful collaborations with DOE in cancer research, though it argues not enough is known about the efficacy of heavy ion treatments to commit to such a facility. The budget justification states, “Randomized trials are essential to establishing clinical benefit for any new cancer treatment, and since a typical heavy ion treatment facility may cost well over $100 million to build, and millions each year to operate, there is a pressing need for more research to determine appropriate use of particle beam therapy to maximize its benefit to cancer patients.”