Energy R&D has emerged as a focal point for bipartisan collaboration in the new Congress. At recent hearings, lawmakers heard testimony in favor of large spending increases spread across a variety of technologies. 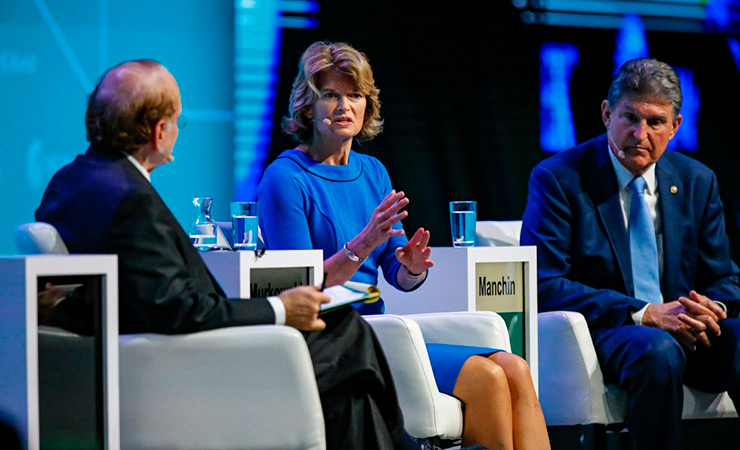 As congressional Republicans increasingly agree with their Democratic colleagues that action is needed to mitigate climate change, energy R&D policy has emerged as a focal point for bipartisan collaboration. Senate Energy and Natural Resources Committee Chair Lisa Murkowski (R-AK) and Ranking Member Joe Manchin (D-WV) have become particularly vocal about pursuing legislation to support energy innovation. In an article they published in the Washington Post on March 8, they cast innovation as a “responsible” solution to climate change that can “bring people together.”

Exactly what proposals lawmakers may embrace remains to be seen, but the possibility of large-scale funding increases has been broached at recent committee hearings. Last month, Murkowski’s committee heard testimony in favor of more than doubling the government’s energy R&D spending. Options for multiplying spending were also discussed at a House Science Committee hearing in late February dedicated to the Advanced Research Projects Agency–Energy, with witnesses suggesting its budget should be raised from $366 million to $1 billion, or potentially even higher.

At the outset of her hearing, Murkowski declared her desire to build on legislative momentum from the previous Congress that resulted in laws supporting quantum information science, advanced nuclear energy technologies, and energy efficiency. “I’ve often spoken about clean energy innovation policies as no-regret solutions, but in reality these are just those first steps. It is time to push hard to bring down the cost of clean energy technologies like renewables, advanced nuclear, next-generation energy storage, and carbon capture,” she said.

The committee heard from leaders of organizations that have recently been advocating for increasing investment in energy R&D, including the Bipartisan Policy Center (BPC), the Energy Futures Initiative (EFI), ClearPath, and the Council on Competitiveness.

BPC President Jason Grumet spotlighted a 2010 recommendation of the American Energy Innovation Council (AEIC) that federal energy R&D spending should more than triple to $16 billion by 2015. AEIC is affiliated with BPC and led by a group of prominent business leaders that includes Microsoft founder Bill Gates and former Lockheed Martin CEO Norm Augustine. Late last year, it issued a report renewing its earlier $16 billion recommendation. Currently, the components of the Department of Energy’s budget that AEIC counted as energy R&D total to about half that number.

Just before the hearing, EFI released a report that points to such mechanisms as a way to stabilize energy R&D funding. It notes that Congress used sales from the Strategic Petroleum Reserve to partially offset spending on biomedical research mandated in the 21st Century Cures Act, and that no spending directed by that act counts against discretionary budget caps. The report cites the Gas Research Institute and Electric Power Research Institute as examples of entitites that have received funding from small energy surcharges. It also points to a DOE oil and gas technology initiative financed by federal royalties from those fuels.

Addressing strategies for R&D investment, Moniz advised that “we must continue to place our bet on innovation outcomes rather than prescribed or planned outcomes as has often been the case in other countries.” He said investments should be made across energy types and technologies while focusing intensively on particular “premier opportunities.” He noted that the EFI report spotlights 10 promising areas for work, such as energy storage technologies, hydrogen fuels, and biological carbon sequestration.

Moniz also said policies should take a regional focus, remarking, “We need innovative ecosystems in more geographies. We need a set of priorities and opportunities that will emerge in different geographies in different ways.” He pointed to Murkowski’s and Manchin’s states as examples of regions where “priorities could be set in very, very different ways to address key low-carbon solutions.” He further suggested DOE national laboratories and other federally funded R&D centers could serve as “cornerstones for these regional ecosystems.”

Council on Competitiveness President Deborah Wince-Smith stressed the importance of workforce development, saying workers will need new skills appropriate for new kinds of jobs. She pointed to current partnerships between skilled labor unions and energy companies as a positive development. In the longer term, she added, “States need to recognize that while it was unfashionable to support vocational training, we need to reinvent that for the 21st century.”

Interjecting in the workforce discussion, Manchin argued it is important to ensure the existence of new jobs before asking workers to learn new skills. “If there’s an announcement there’s going to be a factory in a certain part of any of our states that’s transforming our energy delivery system, they’ll prepare. We’ll get people ready. They’ll go and they’ll be educated because they know that job and that paycheck’s waiting,” he said.

Advocates for energy R&D have focused significant attention on the need to support ARPA–E, a component of DOE that backs R&D projects deemed too high-risk to attract private investment.

At the House Science Committee’s hearing on the agency, Energy Subcommittee Chair Conor Lamb (D-PA) recounted ARPA–E’s origin as a recommendation in the influential 2005 Rising Above the Gathering Storm report. The idea, he noted, had been to create an energy-focused analogue to the Defense Advanced Research Projects Agency (DARPA).

The Gathering Storm report, which was organized by the National Academies and chaired by Norm Augustine, specified that APRA–E should receive $1 billion in annual funding. Congress, however, initially provided about $200 million per year and has steadily but slowly increased spending since then. AEIC is now advocating for raising the budget to its originally intended level.

Asked by Rep. Don Beyer (D-VA) whether $1 billion would be an appropriate funding level, former ARPA–E Director Ellen Williams testified it is a “good target” that might be “rationally” achieved by increasing funding over a period of about five years. The agency’s first director, Arun Majumdar, noted that DARPA’s first appropriation in 1962 was equivalent to about $2 billion in today’s dollars, though he agreed time would be needed to increase ARPA–E’s budget to “on the order of $1 billion.”

Inventor and entrepreneur Saul Griffith made a case for raising ARPA–E’s budget to be on par with DARPA’s current budget, which stands at about $3.5 billion. “I think $1 billion is low,” he said, adding, “It’s not nearly aligned with the scale of the energy transformation challenge, and I think you have enough people and there are enough ideas and things worth working on that it would be money well spent.”

The Republican-invited witness, Manhattan Institute senior fellow Mark Mills, said ARPA–E’s portfolio ought to be reoriented to emphasize “basic science,” arguing the agency should aim to spark advances that could lead to the fundamental transformation of the world’s energy economy. Concerning funding, he remarked, “I’d love to see the budget to go up. I like the DARPA-level budget. But my caveat: I’d like to take it away — the hard task you all have — from programs that are short-term focused in other areas of DOE.”

Energy Subcommittee Ranking Member Randy Weber (R-TX) expressed a willingness to boost ARPA–E’s budget. However, he suggested the agency should avoid funding projects in energy areas supported by other DOE applied R&D programs and that additional funding would require offsets. “If ARPA–E’s budget is increased, we will inevitably have to make tough choices and cut spending elsewhere in the department,” he said.