Senate Minority Leader Chuck Schumer (D-NY) spoke yesterday about a draft proposal to create a “National Science and Technology Foundation” that would spend $100 billion over five years on research related to technologies such as artificial intelligence, quantum computing, and 5G telecommunications. 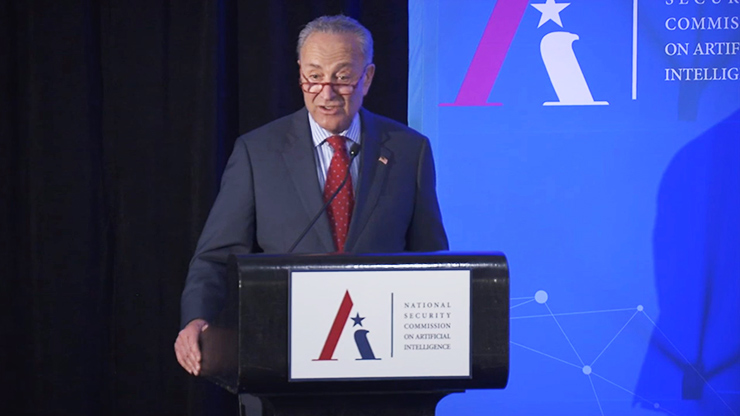 Sen. Chuck Schumer (D-NY) speaks on Nov. 5 at a conference organized by the National Security Commission on Artificial Intelligence.

Referring to the proposal as in a “discussion draft” stage, Schumer said it has not yet been “firmed up” and that its proponents have not settled on how to structure the entity. However, he said the current idea is for it to be a “subsidiary” of the National Science Foundation that would work “in concert” with the Defense Advanced Research Projects Agency and be governed by a board of directors.

According to Schumer, the objective would be for the entity to spend $100 billion over five years, with funding flowing to universities, companies, and other government agencies. For comparison, NSF’s annual budget is currently $8.1 billion while DARPA’s is $3.4 billion.

Schumer did not indicate whether the entity is intended to be permanent or if it would expire at the end of the five-year period he mentioned. He did say it would provide a “long revenue stream” for “fundamental” or “pure” research. Invoking the historical example of Bell Laboratories, which was famous for breakthroughs in both research and technology, he suggested such a model for privately funded basic research is no longer viable, arguing,

Now companies don’t have that kind of ability. And so what we need to do is have the federal government have a dramatically increased investment in AI, in the basic research, in the pure research that companies won’t do. We’re great here in America, and our companies are great, at taking that kind of basic and pure research and turning it into practical things.

Aside from research, Schumer said the entity would also fund the “development of test-bed type facilities,” as well as undergraduate and graduate students, postdoctoral researchers, and “trainees.”

Justifying the need for an increased investment in AI specifically, Schumer pointed to competition with Russia and China. He quoted Russian President Vladimir Putin’s remark that whatever country takes the lead in AI will become “ruler of the world,” and said that China already “runs a massive surveillance state that relentlessly tracks its citizens, controls the flow of information, suppresses minority views, and brutally punishes dissent.”

We need not to have their motivation or their way, but we need to match and exceed their level of commitment, which thus far we have not done. A future where America leads the world in AI is one that recognizes privacy rights and individual liberty and democratic values. It’s a future where the militaries are smarter, not just more lethal.

Schumer said the proposal “had gotten a lot of support” from people he had shown it to who are conscious of the competition with China, and that he had received input from former Google CEO Eric Schmidt, who chairs the AI commission. He also claimed the proposal “has some support of some people very close” to President Trump and Senate Majority Leader Mitch McConnell (R-KY), but that those people had been “unable to get their full-throated support.”

The White House has identified AI, 5G communications, quantum information science, and advanced manufacturing as priority areas that will underpin “industries of the future.” However, the Trump administration has generally been averse to funding R&D that it believes could be supported by private companies.

Appealing to his audience, Schumer said, “Anyone here who has any relationships with those people, or people near them, should be pushing this. This should be bipartisan. … This is about the future of America. This should not be a political issue.”

In addition to discussing the proposal for a new research-funding entity, Schumer also argued that the U.S. should undertake a “comprehensive” reform to immigration policies to remain competitive in technologies such as AI.

Reflecting on a recent visit to a “private sector group” pursuing work in AI, he said that out of an audience of about 200 scientists, only 22 said they were born in the U.S. He argued current U.S. immigration policy is detrimental to work in AI. He also pointed to the failed bipartisan immigration reform legislation of 2006 as a lost opportunity, highlighting provisions that would have expedited the granting of green card status to individuals who obtained an advanced degree from a U.S. university.

Pairing immigration reform with bolstering STEM education, Schumer cited statistics suggesting that U.S. data scientists are on average more experienced than their Chinese counterparts. “We need to maintain and expand this advantage,” he said.