Organizations representing astronomers and Earth scientists are raising concerns that new telecommunications technologies could interfere with scientific use of previously quiet parts of the electromagnetic spectrum. 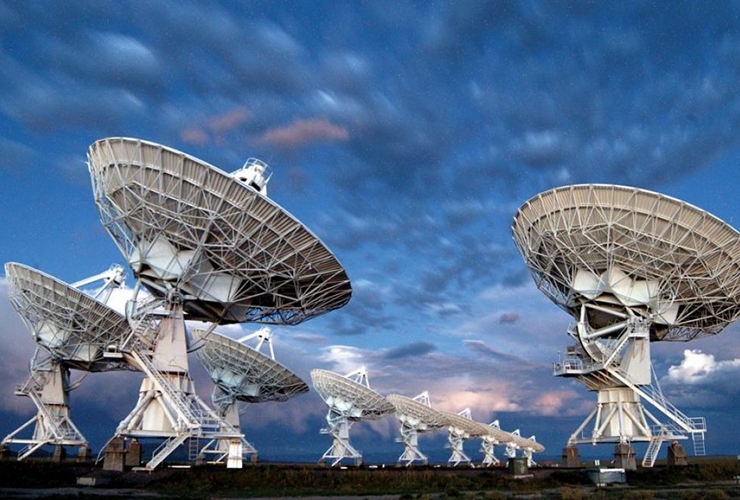 On July 5, Federal Communications Commission rules governing a new category of telecommunications licenses took effect, enabling operators of experimental devices to use radio spectrum bands between 95 gigahertz and 3 terahertz. The rules also open several portions of the spectrum within that range to unlicensed use. However, some astronomers and Earth scientists argue that FCC has not adequately guarded against interference with sensitive celestial and terrestrial observations at various frequencies above 95 gigahertz.

Such concerns add to a growing set of complaints about the encroachment of new telecommunications initiatives on scientific activities. Earlier this year, NASA and the National Oceanic and Atmospheric Administration argued FCC’s planned opening of a 24 gigahertz band to new 5G equipment could significantly diminish weather forecasting capabilities. Separately, the American Geophysical Union and American Meteorological Society have recently taken issue with a proposed FCC rule requiring NOAA to share with terrestrial users the 1675–1680 megahertz band it uses to transmit data from geosynchronous weather satellites. (AMS is an AIP Member Society.)

Still other concerns have come to the fore with SpaceX’s launch of 60 small-scale telecommunications satellites in May, a first step in a much larger plan to expand broadband internet access to remote locations. Astronomers have warned that growing constellations of small satellites could interfere with both optical and radio telescopes. FCC, though, is working to expedite the approval of such projects.

When FCC approved its new license category, called “Spectrum Horizons,” at a meeting in March, Commission Chair Ajit Pai compared it to breaking the sound barrier in flight. He remarked, “Just like Mach 1 speeds, the airwaves above 95 gigahertz … were previously thought to be unapproachable, though in our case for wireless application. However, recent evolutions in technology have led to increased interest in developing these bands, these spectrum horizons, for new services and applications.”

At the invitation of the commission, telecommunications entrepreneur and New York University engineering professor Ted Rappaport discussed the value of the spectrum between 95 gigahertz and 3 terahertz. He said that new sensing, imaging, and positioning technologies could take advantage of those frequencies. Stating that signal attenuation and loss remains manageable above 100 gigahertz, he also pointed to the “amazing amounts of spectrum” that will become available for wireless communications, adding, “Today, I think you can really start the race to 6G as we look at applications we’ve never had before.”

However, such “active” uses of the spectrum could encroach on longstanding scientific uses of certain “passive” bands — portions of the spectrum in which radio telescopes and satellite sensors observe electromagnetic emissions from natural sources. The National Academies Committee on Radio Frequencies (CORF) highlighted the importance of passive bands above 95 gigahertz in comments to FCC during its rulemaking process and urged it to keep certain bands completely cordoned off. The National Radio Astronomy Observatory (NRAO), which operates several telescopes on behalf of the National Science Foundation, raised similar points in a separate filing.

CORF stressed in its filing that because radio observatories are designed to detect “extremely weak” signals, they are “particularly vulnerable to emissions from in-band emissions, spurious and out-of-band emissions from licensed and unlicensed users of neighboring bands, and emissions that produce harmonic signals in the [Radio Astronomy Service] bands, even if those human-made emissions are weak and distant.”

The comment also observed that Earth remote sensing is “growing rapidly” in the affected bands, particularly in the temperature and water vapor bands near 118 gigahertz and 183 gigahertz, which are, respectively, within and near parts of the spectrum being opened for unlicensed use. CORF explained these band are at the “forefront of research” for numerical weather prediction and low-noise instrumentation.

CORF disputed certain assumptions FCC used to justify its rules. While FCC highlighted the reduced signal strength due to absorption by oxygen and water vapor in certain bands, CORF argued those same bands warrant protection due to their importance for weather prediction and data calibration. CORF also asserted that FCC “vastly overestimates” attenuation in the cold, dry, high-altitude locations where radio observatories are located. In addition, it warned that regional restrictions are insufficient for addressing interference with satellite-based observations, which are made over wide areas of the planet.

In its report, FCC concluded that “unlicensed devices can co-exist with radio astronomy in the same and adjacent spectrum bands” due to atmospheric attenuation and the use of highly directional antennas. Concerning Earth remote sensing, the commission found through its own analysis that “up to 42,704 outdoor unlicensed devices can operate simultaneously at maximum power per square kilometer and still meet the protection levels for a vertical satellite scan of an Earth exploration satellite.” For an angle scan, it found 96.5 million such devices could be used without causing harmful interference.

FCC disagreed with CORF’s attenuation analysis, stating that it “does not properly reflect spectrum conditions in the United States," though the commission did prohibit airborne use of unlicensed devices as called for by CORF. FCC also declined CORF and NRAO’s request to exclude certain bands from use, instead requiring that license applicants submit an “interference analysis” that demonstrates their experiment will not harm other spectrum users. Applicants proposing to use passive bands must also explain why nearby non-passive bands are not adequate. “We are adopting this approach rather than prohibiting use of the passive bands because we do not want to unnecessarily hobble valuable research in situations that pose no significant risk to incumbent operations,” FCC stated.

Harvey Liszt, spectrum manager at NRAO, told FYI in an email that he feels FCC’s report “rejected NRAO's and CORF's concerns in a desultory and patronizing manner that also misconstrued them, CORF's filing especially, and failed to address our shared concerns.” More broadly, he added, “One could construe the FCC’s proposed actions as being subversive of the existence of the passive bands that occupy a few percent of the spectrum above 86 gigahertz and 1-2% below 30 gigahertz (very little in between).”

CORF Chair Liese van Zee similarly stated the committee was “disappointed to see our concerns regarding experimental licenses minimized” in FCC’s report on the rule, adding,

Once these frequency bands are allocated to active services, even if only on a temporary basis, they are unlikely to ever again have the low noise, almost interference-free, characteristics that make them so valuable for scientific observations. In essence, granting experimental licenses in the passive bands runs the risk of closing the windows through which we can learn about the universe and explore our home, the Earth. CORF hopes that the FCC will recognize these concerns during the licensing. 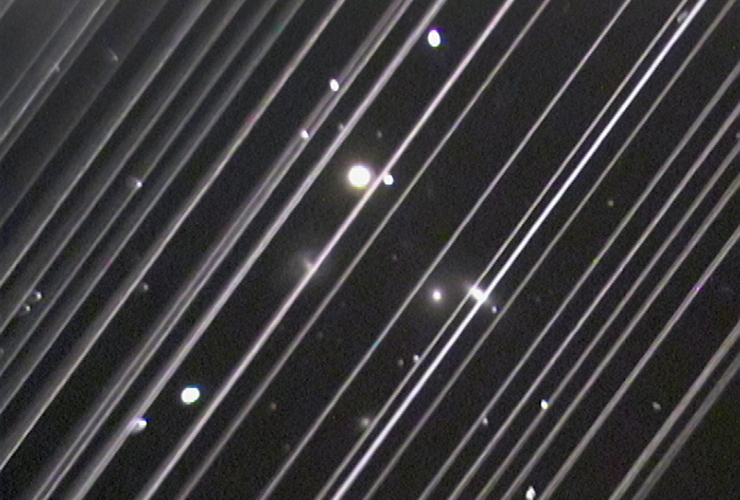 Trails of light reflected from Starlink satellites shortly after their launch in May 2019.

Astronomers are also concerned that observatories face a separate threat from expansive constellations of small satellites being planned in the private sector. Shortly after SpaceX launched the first satellites in its Starlink constellation, the American Astronomical Society and International Astronomical Union released statements warning such satellites’ brightness could hinder the work of ground-based optical telescopes. (AAS is an AIP Member Society.)

The Association of Universities for Research in Astronomy, which operates observatories for NASA and NSF, indicated in its own statement that, while satellites would only be a “nuisance” for the Large Synoptic Survey Telescope currently under construction in Chile, “The impact of satellite constellations on other AURA telescopes that have wider fields, longer exposures, and/or less sophisticated data processing pipelines may be much more significant.”

There are also concerns that transmissions from such satellites could cause interference with radio astronomy observations. The AAS and IAU statements express concerns about such interference, with IAU generally urging that government agencies devise a “regulatory framework to mitigate or eliminate the detrimental impacts on scientific exploration as soon as practical.” NSF reported last month that it has established a coordination agreement with SpaceX to ensure Starlink meets international radio astronomy protection standards.

Small satellites will proliferate rapidly if other companies, such as Amazon, Boeing, and OneWeb, also succeed in launching large constellations of communications satellites. FCC Chair Pai outlined the potential scope of future activity by these and other companies at a July 9 meeting hosted by U.S. Chamber of Commerce. The agency, he noted, has approved applications for a combined total of more than 13,000 satellites in 2018 alone, which is more than six times the number of satellites currently in operation. To pave the way forward, he announced FCC is preparing a new rule that would make the licensing process for small satellites easier, faster, and less expensive.