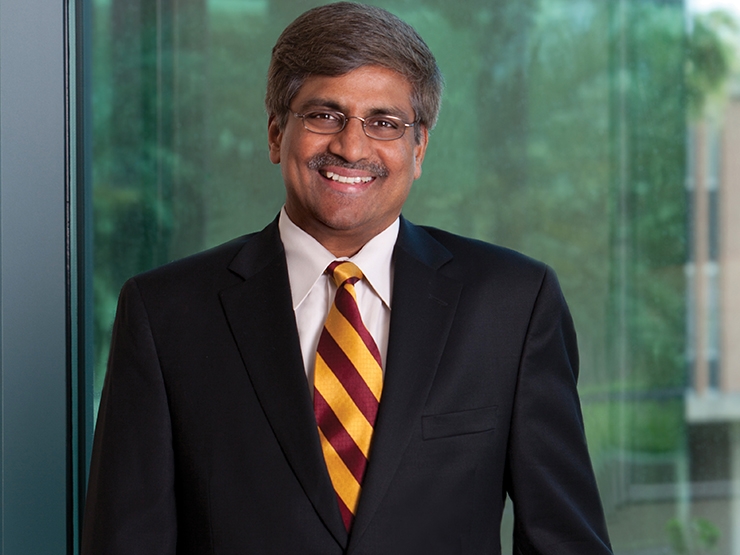 The White House announced today that President Trump intends to nominate Sethuraman Panchanathan, a professor of computing and informatics at Arizona State University, to be director of the National Science Foundation. Panchanathan, who often goes by the nickname “Panch,” would replace France Córdova, whose six-year term expires in March. Córdova said in a statement that she is “delighted” with the pick, saying Panchanathan has the “character and knowledge that make him an ideal fit for the job.”

Panchanathan has served as ASU’s chief research and innovation officer since 2010 and is also executive vice president of the university’s “knowledge enterprise.” In those positions, he has overseen the university’s aggressive efforts to multiply its research budget and establish itself as a top center for innovation. Panchanathan is already familiar with NSF’s inner workings through his service on the National Science Board, the agency’s 24-member governing board, to which President Obama appointed him in 2014.

An expert on assistive technology

Panchanathan earned a bachelor’s degree in physics from the University of Madras in 1981 and went on to earn a doctorate in electrical and computer engineering from the University of Ottawa in 1989. He stayed on as a professor at Ottawa until 1997 and founded the university’s Visual Computing and Communications Laboratory.

Panchanathan’s research has focused on human–technology interactions, including developing haptic user interfaces and “ubiquitous computing environments” that can enhance the quality of life for individuals with disabilities. On his website, he states that his mission is to "inspire, empower, and serve humanity through life-changing innovations that have the potential to alter the face of how we view 'different abilities' on a global scale."

After joining ASU in 1997, Panchanathan became founding director of its School of Computing and Informatics in 2006. In 2001, he established the university’s Center for Cognitive Ubiquitous Computing, which develops multimedia computing tools for healthcare, rehabilitative, and assistive applications, such as devices for assisting individuals who are blind and visually impaired. He has also co-founded two companies, MotionEase and RehabDev.

Panchanathan has substantially engaged with NSF policy through his service on the National Science Board and served as chair of the board’s strategy committee. He is currently a member of its external engagement and national policy committees.

The board is responsible for shaping NSF’s budget priorities and reviewing major award decisions, particularly those involving the construction of large research facilities. It also produces topical reports as well as the biennial Science and Engineering Indicators, an authoritative collection of statistics on global R&D and STEM education and workforce trends.

If the Senate confirms him as NSF director, Panchanathan will oversee a budget that currently stands at just over $8 billion. The agency funds all disciplines of science and engineering except for biomedical research, and it is the primary federal supporter of fundamental research in many fields, such as ground-based astronomy. Under Córdova, the agency has also sought to increase its focus on high-priority interdisciplinary research areas through its 10 Big Ideas framework.

Panchanathan recently discussed his views on how NSF and other federal research agencies contribute to the U.S. economy at a hearing held by the Senate Commerce, Science, and Transportation Committee. In his opening statement, he said that four elements he views as critical to national competitiveness are developing “strong ecosystems” of support for research and development, education, cross-sector partnerships, and economic development.

“We are a global leader because of the strong federal investments in science, technology, engineering, higher education, and workforce development,” he said, adding, “I'm enthusiastic about American leadership in the industries of the future, especially in the areas of AI, data science, 5G, advanced manufacturing, synthetic biology, and quantum science.” Those areas correspond to ones that are currently prioritized by the White House Office of Science and Technology Policy.

Panchanathan also pointed to NSF’s Big Ideas as an important tool for enhancing U.S. competitiveness and said “it is imperative that we increasingly focus on stimulating and seeding bold, large-scale foundational research with meaningful societal impact.”

Asked whether the U.S. remains the top destination for scientists from around the globe, Panchanathan said he believes that still holds true, but added,

He went on to say that, in light of increasing global competition for talent, the U.S. should “double down and invest more on basic research.”

Panchanathan also stressed the importance of partnerships, saying for instance that the U.S. should “incentivize building corporate research laboratories that seamlessly span academia and industry.” He further suggested more could be done to promote partnerships that tackle “grand challenge” problems.

Correction: The initial version of this article incorrectly stated that Panchanathan's nomination would be reviewed by the Senate Commerce, Science, and Transportation Committee. Though that committee has jurisdiction over NSF policy, the Senate Health, Education, Labor, and Pensions Committee reviews personnel nominations for the agency.