The collapse of the iconic Arecibo telescope in Puerto Rico has triggered a campaign to rebuild a new and improved telescope at the site. 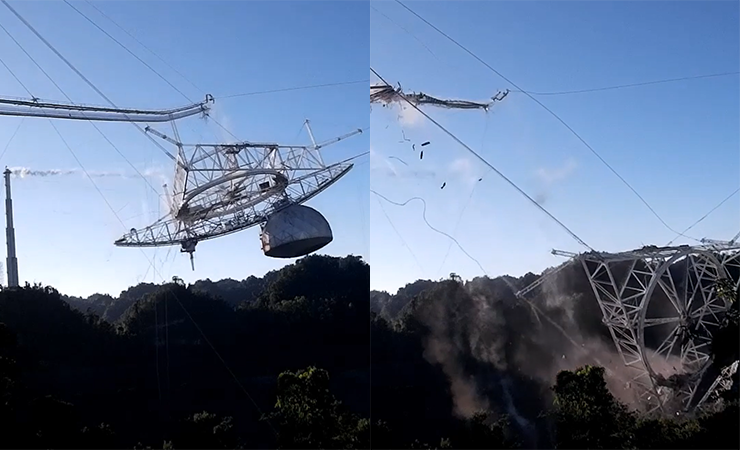 Stills from footage of the Arecibo telescope platform collapse.

Suffering a cascading series of cable failures, the 900 ton instrument platform of the Arecibo radio telescope in Puerto Rico collapsed on the morning of Dec. 1, smashing into the telescope’s 305 meter reflector dish. The collapse came 12 days after the National Science Foundation announced it would decommission the telescope because the break of a main platform support cable on Nov. 6 had rendered the facility unsafe to repair.

NSF has indicated that any decision for it to request funding to rebuild Arecibo will be routed through its major research facility construction process, which weighs input from the scientific community and other stakeholders. In the near term, the agency has committed to continue supporting STEM outreach efforts at the site as well as certain research assets that are part of the broader Arecibo observatory complex.

Meanwhile, proponents of the telescope have quickly mobilized a campaign for constructing a replacement and have begun reaching out to Congress to build support.

Advocates call for a new and improved Arecibo

A multi-purpose telescope with unique capabilities, Arecibo supported a broad portfolio of astronomical and upper-atmosphere research and assisted NASA in characterizing near-Earth asteroids using its planetary radar. The facility also carries an important cultural significance for Puerto Rico and is credited with motivating many children from the U.S. territory to pursue careers in science.

A petition advocating to rebuild the telescope was launched the day after the collapse and has since garnered more than 58,000 signatures. “We ask Congress to allocate funding to build a new Arecibo radio telescope with greater capabilities than the previous telescope — to maintain American leadership in planetary defense, astronomy, and ionospheric studies; and to inspire a new generation of scientists,” it states. Backers of the petition have also launched an associated Twitter account.

In parallel, a group of astronomers connected to the facility has begun sketching out concepts for a new and improved telescope. Ray Lugo, director of the Florida Space Institute at the University of Central Florida, which manages Arecibo, told CNN that since NSF’s decision to decommission the telescope he has met with 25 members of Congress and the governor of Puerto Rico to advocate for rebuilding. Lugo said he is working on a concept for an “Arecibo model 2,” which he estimates would cost around $400 million.

Asked for more details, Lugo told FYI that $400 million is a rough estimate and “represents a budget that would enable the construction of a facility that surpasses all existing facilities in capability.” He indicated a key question facing the design group is whether the reflector dish would be reconstructed in its previous form or built to be “larger and possibly ‘point able.’” He suggested the group is unlikely to propose another suspended instrument platform if the science goals can be achieved with another configuration, since the platform “will always be a ‘risk.’”

A handful of legislators have publicly weighed in on NSF’s decision to decommission the telescope.

On Nov. 19, House Science Committee Chair Eddie Bernice Johnson (D-TX) and Ranking Member Frank Lucas (R-OK) issued a statement in support of the decision while also calling on NSF to “explore opportunities to use the site for exciting new science in the future.”

Congresswoman Jennifer González Colón (R-PR), Puerto Rico’s non-voting member, sent a letter to the committee on Dec. 3 asking for a hearing focused on “acquiring a better understanding of the events leading to the collapse, efforts to clean the site, and next steps for the facility.” In an accompanying press release, she also stated she had advocated for rebuilding the facility in a conversation with NSF Director Sethuraman Panchanathan.

A few other congressional members have commented on the collapse, including Reps. Alexandria Ocasio-Cortez (D-NY), Stephanie Murphy (D-FL), and Darren Soto (D-FL). Soto tweeted, “Arecibo Observatory Telescope helped us view far away worlds, identify meteors that could threaten Earth, and inspire a generation of Puerto Ricans to pursue space and STEM careers. We must work with NSF and UCF to rebuild or develop a new mission.”

There is precedent for Congress intervening to rebuild a destroyed telescope. After the 91 meter Green Bank Radio Telescope in West Virginia collapsed unexpectedly in 1988, funding to rebuild a 100 meter replacement was secured by then-Sen. Robert Byrd (D-WV), who chaired the Senate Appropriations Committee, and the new facility began operations in 2001.

Arecibo’s most powerful proponent in Congress, Rep. José Serrano (D-NY), is retiring at the end of the year. Serrano, who was born in Puerto Rico, chairs the House appropriations subcommittee for NSF and strongly opposed the agency’s plans to divest funding from the facility in the years before the collapse.

NSF began the process of formally divesting from Arecibo and the new Green Bank telescope in 2016.

Pressed by Serrano about the decision, then-NSF Director France Córdova explained at 2017 hearing that the agency had decided to seek partners capable of assuming a greater share of Arecibo’s operating costs in part due to a need to free up resources for newer telescopes, such as the Daniel K. Inouye Solar Telescope and the Vera C. Rubin Observatory. She noted the decision followed a portfolio review prompted by the 2010 decadal survey for astronomy and astrophysics, which recommends priorities for NSF.

Serrano also raised concerns about the state of maintenance at Arecibo and asked what could be done to upgrade the facility. Córdova replied, “Modernization of Arecibo could include new optic elements to allow the telescope to access more of the visible sky — because the observations are currently limited to an angle of just 20 degrees from straight overhead — new receivers, upgraded reflector panels, and new radar transmitter subsystems.” She added, “When I asked my group how much all that would cost, they don't have firm estimates yet, but they think it could approach a hundred million dollars.”

In the following years, NSF approved a few modest upgrades to the observatory, including a $5.8 million award to add an advanced antenna to the telescope. At a press briefing after the collapse, NSF Astronomy Division Director Ralph Gaume pointed to this award and another made after the first cable break in August as evidence of the agency’s commitment to Arecibo.

Asked about the prospects of rebuilding, Gaume said, “NSF has a very well-defined process for funding and constructing large scale infrastructure, including telescopes. It's a multi-year process that involves congressional appropriations, and the assessment and needs of the scientific community. So it's very early for us to comment on the replacement.”

Work on the next astronomy and astrophysics decadal survey is currently in its final stages, with the release slated for this spring. Although NSF’s budget has grown in recent years, the operating cost of its telescope portfolio continues to be a significant concern, and any proposal to rebuild Arecibo would still be weighed against a host of competing telescope projects.