The Department of Energy has selected Brookhaven National Laboratory as the site for its proposed Electron-Ion Collider, a flagship nuclear science facility that is estimated to cost between $1.6 billion and $2.6 billion. 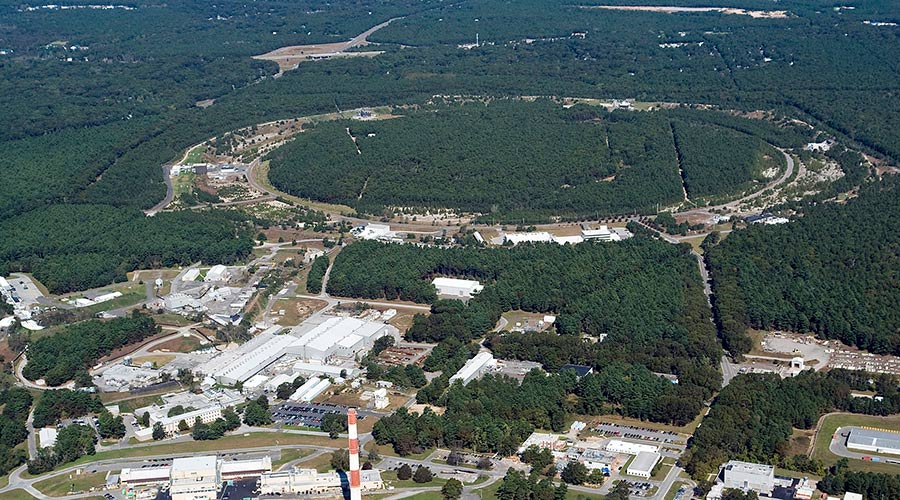 Brookhaven’s plans for a new Electron-Ion Collider call for it to be built as a modification of the existing Relativistic Heavy Ion Collider, pictured here.

The Department of Energy announced on Jan. 9 that it has chosen Brookhaven National Laboratory in Long Island, New York, as the site for a major new facility called the Electron-Ion Collider (EIC). To build it, the lab plans to decommission and modify its existing Relativistic Heavy Ion Collider (RHIC), principally by adding an electron injector and storage ring to it. When finished, the new collider would provide unparalleled capabilities for exploring the behaviors of the fundamental particles and forces that bind atomic nuclei together.

The EIC was recommended as a top priority in the 2015 Long Range Plan prepared by the Nuclear Science Advisory Committee, which serves DOE and the National Science Foundation. A 2018 National Academies study endorsed the scientific value of the project and DOE approved the “mission need” for it on Dec. 19.

According to the department, the design and construction of the EIC is expected to take about a decade, provided Congress appropriates the necessary funding. Construction is anticipated to cost between $1.6 billion and $2.6 billion altogether.

Following close on the opening of Brookhaven’s National Synchrotron Light Source II in 2015, construction of the EIC will help cement the lab’s standing for many years to come.

Accelerator facilities have long been a claim to fame for Brookhaven, beginning with the commissioning of its Cosmotron in 1953. Later, the opening of the original National Synchrotron Light Source in 1982 put the lab at the forefront of a new wave of synchrotron user facilities, even as the cancellation of its proposed ISABELLE collider in 1983 left it behind the vanguard of high energy physics. The opening of RHIC in 2000 firmly established Brookhaven as a world-leading center for nuclear physics.

Before the EIC can be built, DOE will have to sign off on additional R&D and design work that will take place over the next several years. In the meantime, work at RHIC will continue, including on an ongoing upgrade to its PHENIX detector that will operate through the conclusion of RHIC’s scientific program and then likely be adapted and integrated into the EIC.

Aside from Brookhaven, the only other contender to host the EIC was the Thomas Jefferson National Accelerator Facility in Newport News, Virginia. Jefferson Lab had proposed to build the collider as an extension of its Continuous Electron Beam Accelerator Facility, which completed a major upgrade in 2017.

According to DOE, Jefferson Lab will still be a “major partner” in the project. In a statement, Laboratory Director Stuart Henderson remarked, “We are excited about partnering with Brookhaven National Lab in the design, construction, and scientific program of the EIC. The project will bring jobs to Jefferson Lab and will need our expertise in particle accelerators, detector technologies, and nuclear physics.”

Brookhaven Director Doon Gibbs also highlighted the partnerships the project will require in a statement responding to DOE’s announcement. “We look forward to working with Jefferson Lab, other DOE labs, universities, and the worldwide EIC user community — about 1,000 scientists from 30 nations — to deliver the EIC and advance this important field of science,” he said.

Worldwide, China is the only other country actively planning for an electron-ion collider. That facility would be built as an extension of the High Intensity Heavy Ion Accelerator Facility currently under construction in Huizhou, a large city near Hong Kong. However, it would not reach energy levels as high as those at Brookhaven’s EIC and would provide complementary capabilities.

This illustration from the cover of Brookhaven’s Pre-Conceptual Design Report for its Electron-Ion Collider, also known as eRHIC, shows plans to modify the existing RHIC facility by adding an electron injector and storage ring.

In its latest appropriation for the Department of Energy, Congress specified funding for the EIC project for the first time: $10 million for preparatory R&D and a $1 million toehold on construction funding. Although ongoing congressional support is never guaranteed, DOE’s site selection announcement signals confidence the project is well positioned to ramp up in the years ahead.

Concerning the project’s total cost, the lower bound of $1.6 billion in DOE’s estimate is close to the $1.5 billion that was estimated in a 2015 review, whereas the upper bound of $2.6 billion is clearly well in excess of that. As preparatory R&D continues and the project converges on a final design, the estimated range will eventually narrow to a single figure.

At present, the funding outlook appears positive. The 2015 Long-Range Plan estimated the EIC project would prove feasible assuming the budget for the DOE Office of Nuclear Physics grew at a “modest” rate, defined as 1.6% per year above inflation. Since then, the office’s budget has grown by 20% overall, roughly in line with that expectation.

Much of the budget for the EIC project will come as other commitments within the Nuclear Physics program reach their conclusion. The ramp-down in construction of the Facility for Rare Isotope Beams at Michigan State University is currently freeing up funding for other small and mid-scale projects, which should themselves be well along by the time work on the EIC intensifies. In addition, when RHIC shuts down to accommodate EIC construction, its operating budget of nearly $200 million per year will also become available.