The budget for the Defense Department’s Research, Development, Test, and Evaluation activities is continuing to rise dramatically in fiscal year 2020, with a focus on late-stage prototyping and testing. Funding for earlier-stage R&D accounts is rising by 1% to $16.1 billion.

With the enactment of fiscal year 2020 appropriations, the budget for the Department of Defense’s Research, Development, Test, and Evaluation activities is increasing 10% to $109 billion. The boost continues a run of major increases that has attracted little attention but has led DOD’s annual RDT&E spending to grow by $42 billion over the last five years. These figures include DOD’s main RDT&E budget as well as other, smaller RDT&E accounts.

This growth trend reflects strong congressional support for DOD’s recent efforts to speed the maturation and fielding of advanced technological systems. Accordingly, most of the additional funding has gone to late-stage prototyping and testing work. By comparison, spending on early-stage R&D has increased more moderately, with DOD’s Basic Research, Applied Research, and Advanced Technology Development accounts collectively growing about 30% in the last five years, including a 1% increase this year to $16.1 billion. 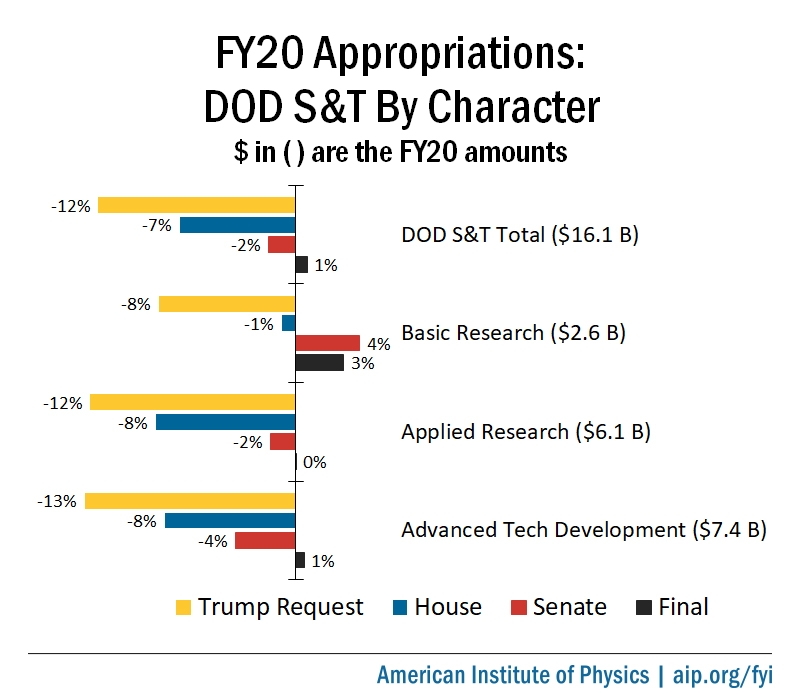 DOD’s appropriation was included in a package bill that President Trump signed on Dec. 20. An explanatory statement accompanying the bill provides detailed line-item funding direction as well as policy guidance on select matters. The House and Senate reports accompanying their original spending bills provide additional direction except where it is negated by language in the final statement. For summary tables breaking down outcomes by service branch, see the FYI Federal Science Budget Tracker. 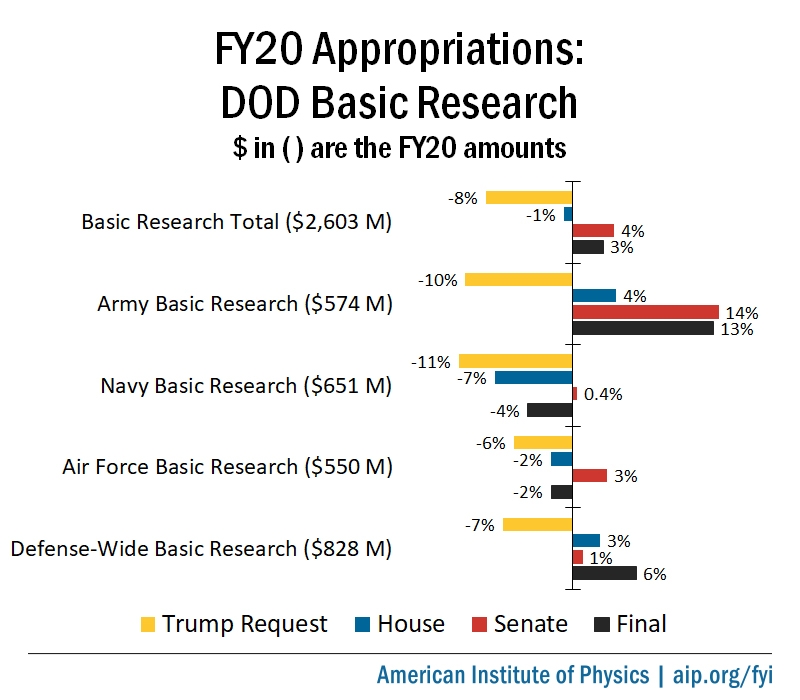 Through its Basic Research account, DOD supports in-house and extramural research and an array of STEM fellowships and education programs. This year, funding for the account’s topline is increasing 3% to $2.6 billion.

Basic Research Initiatives. Funding for Basic Research Initiatives is increasing 25% to $71 million. The account funds the Vannevar Bush Faculty Fellowship program and the Minerva Research Initiative, as well as a series of pilot programs. These include the recently reconfigured Defense Established Program to Stimulate Competitive Research (DEPSCoR), which funds projects in states and territories that have traditionally received smaller shares of federal research funding.

STEM education. The budget for the National Defense Education Program is increasing 6% to $144 million. The program aims to develop STEM talent through scholarships and fellowships as well as by supporting STEM engagement opportunities at schools where children of military families are enrolled.

Historically Black Colleges and Universities. After a year of level funding, DOD’s support for HBCUs and other minority serving institutions is resuming a string of recent increases with a 30% boost to $53 million.

Hypersonics. This year’s appropriation includes large funding increases for hypersonics projects, including $100 million for DOD to set up a Joint Hypersonics Transition Office. The statement explains that the office will address appropriators’ concerns that rapid growth in hypersonic research could lead to “stove-piped, proprietary systems that duplicate capabilities and increase costs.” DOD is further instructed to “develop and implement an integrated science and technology roadmap for hypersonics and to establish a university consortium for hypersonics research and workforce development.”

Congress is also providing $404 million, or $176 million more than requested, for a new Army program to develop a land-based, long-range hypersonic weapon. Funding for a hypersonic defense program at the Missile Defense Agency is increasing from $131 million to $390 million, which is $233 million more than requested, and a separate hypersonic and ballistic missile tracking space sensor program is receiving $108 million that was not in DOD’s request. Air Force funding for hypersonics prototyping is increasing from $508 million to the requested $576 million.

Missile warning satellites. Funding for the Air Force’s Next-Generation Overhead Persistent Infrared (Next-Gen OPIR) program is increasing from $643 billion to almost $1.5 billion. The space-based missile early warning system is part of DOD’s efforts to develop a successor architecture to its Space-Based Infrared System (SBIRS) and is being administered through special rapid acquisition authorities. Senate appropriators proposed funding the project at over $1.9 billion, expressing concern that the Air Force is not committing adequate resources to the program and that, if it fails, it could decrease Congress’ willingness to continue using rapid acquisition for new space systems.

The final statement asserts that, while Next-Gen OPIR constitutes an “important near-term step,” DOD should also take a more comprehensive, long-term view of space-based missile detection. It expresses dismay that various agencies have plans to “spend tens of billions of dollars” on various technologies but that DOD “has yet to synchronize or harmonize these proposals into a clearly articulated executable and affordable integrated enterprise space architecture.” The statement therefore directs the department to develop a detailed strategy within 270 days. 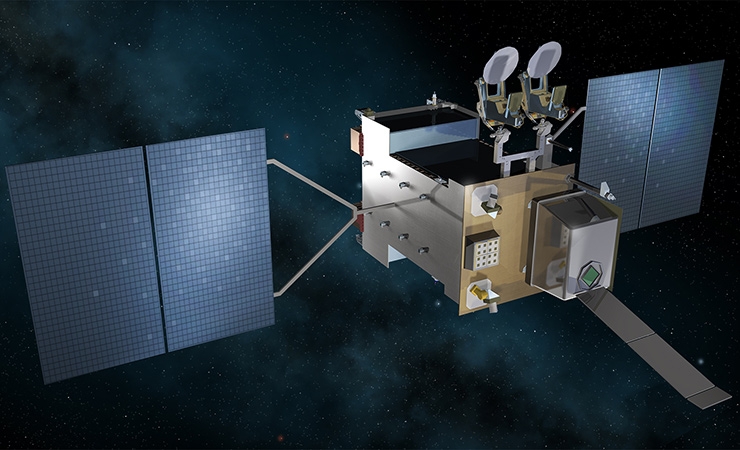 Weather satellites. Funding for the Air Force’s next-generation environmental satellite system, the Weather System Follow-On, is increasing from $138 million to $206 million, which is $20 million less than requested. A separate budget for the development of electro-optical weather systems is increasing from $8 million to $126 million. The Air Force has been scrambling to develop replacement capabilities for its aging Defense Meteorological Satellite Program, and the explanatory statement now directs it to develop a “weather enterprise strategy” within 180 days. This year’s National Defense Authorization Act requires the Air Force to launch a “pathfinder” environmental monitoring satellite or hosted payload by 2023 and an electro-optical/infrared weather satellite by October 2025.

5G telecommunications. Congress is providing $200 million for the new Next Generation Information Communications Technology program. DOD set up the program last year to accelerate the development of 5G equipment with dual military and civilian uses, facilitate collaboration with industry and academia on 5G capabilities, and develop means of dynamically sharing spectrum in congested and contested environments. The Senate proposed providing the full $436 million that DOD has indicated the program would require.

Strategic Capabilities Office. The office, which reports to the deputy secretary of defense, is a relatively new creation that is principally concerned with exploring novel uses for existing or near-term technologies. After a period of rapid growth, its overall budget is receding this year from $1.4 billion to $1.2 billion. Within the office, Congress is allocating $70 million for Project Dilithium, an effort to assess the feasibility of deploying transportable nuclear reactors at remote bases.

National Security Innovation Capital. Congress has declined to fund a proposed program that would support dual-use hardware technology companies as a counterweight to the influence of Chinese venture capital investment. The department requested $75 million for the program, which was to be set up through its Defense Innovation Unit.

Research security. Congress is providing $3 million for implementing the Securing American Science and Technology Act, which was incorporated into this year’s National Defense Authorization Act. The legislation directs DOD and other federal agencies to coordinate their efforts to protect federally funded research from exploitation by foreign governments and to sponsor a National Academies roundtable on the subject.