The budget for the National Nuclear Security Administration is continuing its recent rapid rise, with the latest appropriation supporting major new plutonium research and production initiatives while rejecting a proposal to pare back the inertial confinement fusion program. 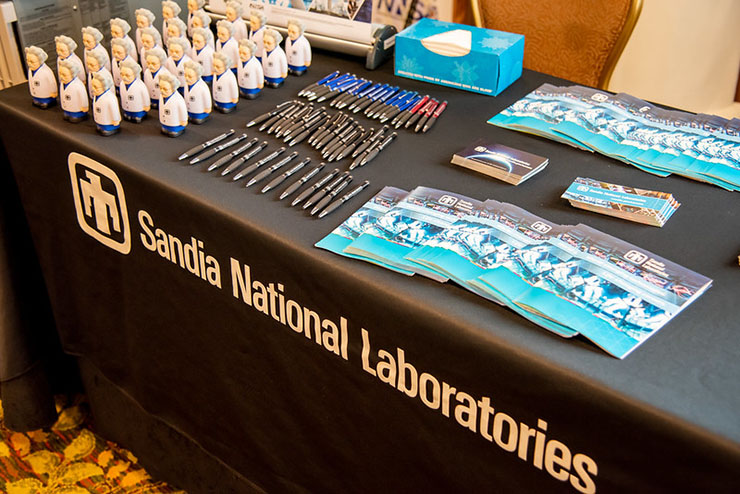 The booth for Sandia National Laboratories at an NNSA job fair last year. Sandia, Los Alamos National Lab, and Lawrence Livermore National Lab are together seeking to hire thousands of new employees in response to NNSA’s expanding activities and an anticipated wave of retirements.

The budget for the National Nuclear Security Administration is rising 10% to $16.7 billion under its fiscal year 2020 appropriation, continuing a multi-year surge directed toward modernizing the U.S. nuclear weapons stockpile and associated infrastructure. NNSA is expected to request $20 billion in its fiscal year 2021 budget request, scheduled for release on Feb. 10.

Most of the increase for this fiscal year is in the Weapons Activities account, which is rising by $1.4 billion to $12.5 billion. The account funds warhead life extension programs as well as the research, development, test, and evaluation (RDT&E) activities that comprise the Stockpile Stewardship Program, which certifies the safety and reliability of the stockpile without explosive testing. The topline for these RDT&E activities is increasing 19% to $2.4 billion.

Meanwhile, the budget for the Defense Nuclear Non-Proliferation account is increasing 12% to $2.2 billion in support of efforts to reduce reliance on radioactive materials and to prevent them from spreading around the world.

An explanatory statement accompanying the appropriations legislation for NNSA provides detailed funding and policy direction, and the House and Senate reports on their original proposals convey additional direction, except where the language is negated in the final statement. For summary tables, consult the FYI Federal Science Budget Tracker.

Congress met or exceeded NNSA’s requested budget increases for each of the Weapons Activities RDT&E programs, which span science, engineering, computing, and advanced manufacturing. It also turned back a proposed cut to inertial confinement fusion research. 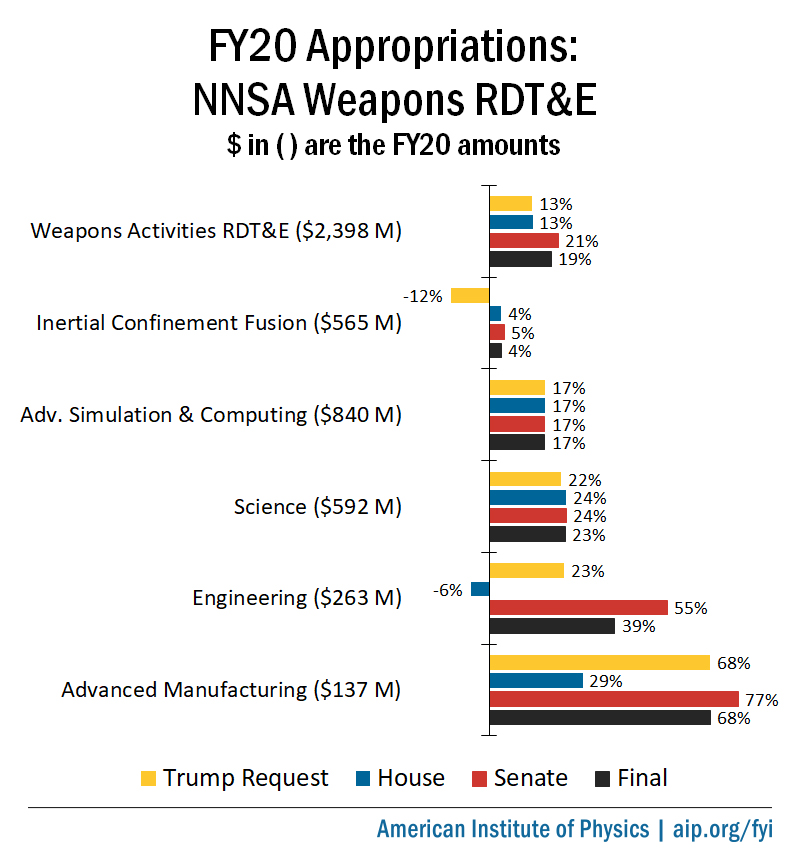 Inertial confinement fusion. The ICF budget is increasing 4% to $565 million, rejecting the requested cut of 12%. The administration has sought to shift ICF funds to “higher priority” activities in its last two budget requests, though the one for fiscal year 2020 dropped a proposal to withdraw funding from the OMEGA Laser Facility at the University of Rochester.

Congress is keeping a close eye on the ICF program, particularly its elusive goal of achieving fusion ignition. The final statement adopts Senate language directing NNSA to commission the JASON science advisory group to evaluate the “technical progress of all three approaches to ignition.” It adds that if the study concludes ignition science activities are necessary to maintain the stockpile, the review should “recommend and prioritize research areas that would improve the program.“ The assessment is also to assess the status of international competition in the field and the ability of the U.S. to “avoid technological surprise.”

Separately, Congress directs NNSA to report on its plans to “meet or exceed proposed near-peer technological developments with regard to laser and pulsed power facilities and technologies.” The report is required to include a “preliminary budget to build or modify existing facilities to address shortfalls and prevent technological surprise.”

Finally, NNSA is directed to report on how its High Energy Density Laboratory Plasmas program supports the agency’s national security mission. The statement specifies level funding of $8 million for the program, splitting the difference between the House and Senate proposals.

Advanced computing. The budget for Advanced Simulation and Computing is increasing 17% to $840 million. Congress directs that up to $48 million of this amount go toward artificial intelligence projects, with the Senate report directing NNSA to produce a five year plan for applying AI and machine learning to the agency’s stockpile stewardship responsibilities and other national security missions.

Plutonium imaging. In the Science account, the budget for the Enhanced Capabilities for Subcritical Experiments program is nearly tripling to $145 million, as requested. Through the program, NNSA is building a major new facility that will capture high-fidelity images of plutonium implosion dynamics using x-rays. The core component of the facility is currently projected to be completed by 2025 at a cost of up to $1.1 billion.

Plutonium production. NNSA is working to ramp up its capacity to build new plutonium cores for nuclear weapons, known as pits, to replace aging ones in the current stockpile. To meet a production target of 80 pits per year by 2030, NNSA plans to repurpose a cancelled plutonium disposal project at the Savannah River Site in South Carolina into a facility designed to produce 50 pits per year, with the remainder to be produced at Los Alamos National Lab. Congress met NNSA’s request to nearly double the Plutonium Sustainment account to $712 million in support of the two-site strategy.

Stockpile Responsiveness Program. In the Engineering account, the budget for the recently launched Stockpile Responsiveness Program is doubling to $70 million, exceeding the request by $30 million. The program aims to offer scientists and engineers opportunities to exercise the full set of skills involved in the nuclear weapons lifecycle. In expanding the program, Congress directs NNSA to study the cost drivers of warhead life extension programs and consider opportunities to improve “the rigor with which technology and manufacturing assessments are conducted; early engagement between design and production agencies; and implementation of design for manufacture strategies.”

Low-yield warhead. Congress provides $10 million to complete work on a low-yield variant of the W76-2 warhead. House Democrats unsuccessfully sought to halt funding for the modification project and prohibit the Department of Defense from deploying the submarine-launched warhead, arguing it could increase the danger of conflicts escalating into full-scale nuclear war. DOD confirmed this week that it has now deployed the warhead, stating that it is designed to deter potential adversaries from themselves using low-yield weapons.

Plutonium disposal. Congress provides the $79 million requested to support NNSA’s new “dilute and dispose” strategy for surplus plutonium, which the agency is now pursuing in lieu of completing the Mixed Oxide (MOX) Fuel Fabrication Facility at the Savannah River Site. It also provides $220 million to continue activities related to cancelling the MOX plant.

Cesium irradiator replacement. Congress specifies $45 million for the Cesium Irradiator Replacement Program, which works to reduce the use of devices that require the radioisotope cesium-137. Congress directs that up to $20 million go toward cleanup of a cesium spill at a medical research center in Washington State. Via the Senate report, Congress also directs the Government Accountability Office to assess the technology readiness of non-radioisotopic alternatives for medical and industrial technologies that rely on radioisotopes.

Mo-99 production. The Laboratory and Partnership Support program is increasing from $35 million to $45 million, of which Congress specifies that $10 million support “global industry partners” that are working to decrease the use of highly enriched uranium (HEU) in the production of molybdenum-99, a widely used medical radioisotope. It further directs that $35 million of the total support competitively awarded cooperative agreements for establishing a domestic source of Mo-99.

Nonproliferation R&D. The budget for the Nuclear Nonproliferation R&D account is decreasing from $576 million to $533 million due to a transfer of the HEU Reactor Conversion program to a separate account. Of the total, $299 million is for proliferation detection efforts, an $18 million increase, and $197 million is for nuclear detonation detection activities, a $1 million increase. Of the remaining amount, $15 million is dedicated to developing low-enriched uranium fuels that could replace the HEU fuel used in naval reactors and just under $23 million is provided as requested to launch a “nonproliferation stewardship initiative.” NNSA has said the initiative will work to “build and sustain the requisite technical competencies, based on enabling infrastructure, science and technology, and workforce expertise, that are needed to support policymakers and future nonproliferation missions.”