The National Nuclear Security Administration’s budget would rise by about $2 billion under the Trump administration’s proposal for fiscal year 2019. Most weapons-related R&D programs would benefit from the funding influx, with the notable exception of Inertial Confinement Fusion, which the administration seeks to cut by 20 percent.

The ramp up began during the Obama administration, which committed to a comprehensive nuclear modernization effort in part to gain support for the New START Treaty, which places limits on U.S. and Russian stockpiles of nuclear weapons.

Although funding for most R&D programs would increase under the administration’s proposal, the rising tide of spending would not lift all boats. Most notably, the Inertial Confinement Fusion program budget would fall by 20 percent to $419 million.

The full budget document for NNSA is available here. Program-by-program highlights are summarized below and further information about current funding proposals is available in FYI’s Federal Science Budget Tracker. 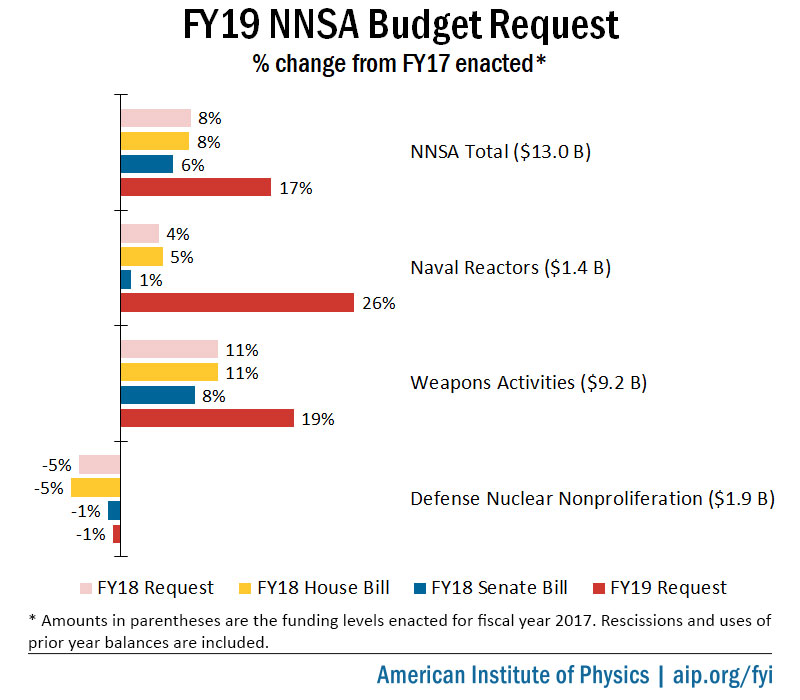 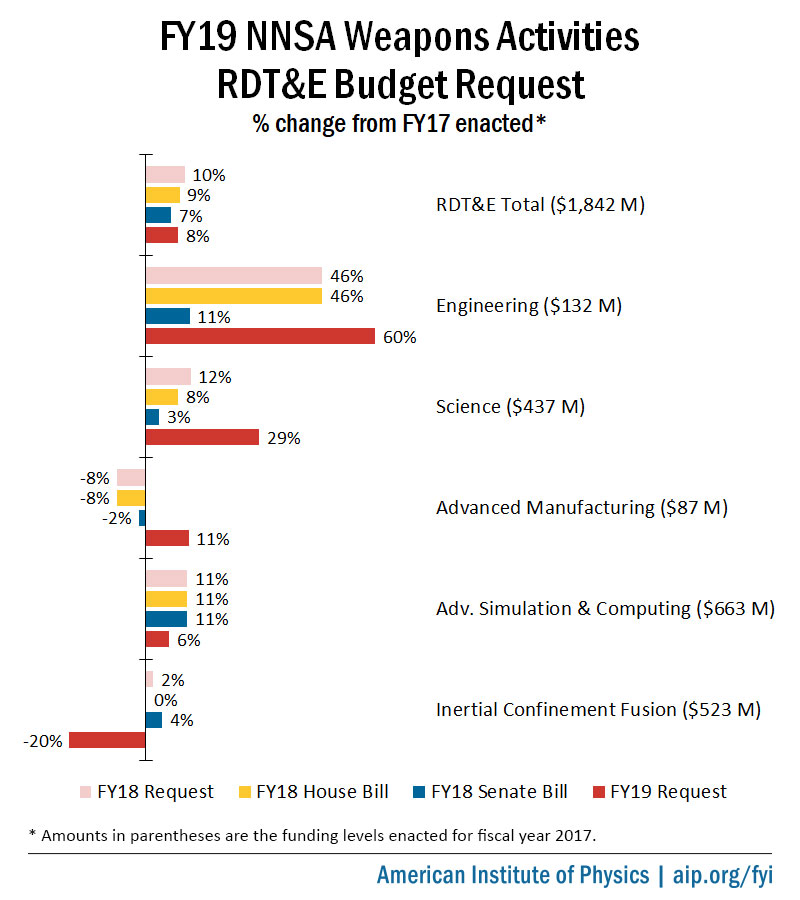 Much of the $104 million cut to the ICF budget would come from a significant scaling back of support for the National Ignition Facility (NIF) at Lawrence Livermore National Laboratory and initiation of a three-year withdrawal from the Laboratory for Laser Energetics (LLE) at the University of Rochester. The budget document states that NNSA recognizes the “critical need to maintain required experimental capabilities and expertise in high-energy-density (HED) science,” but that it plans to slow pursuit of fusion ignition in order to support “higher priority and shorter term [warhead Life Extension Program] and infrastructure needs.”

It later adds that by withdrawing from LLE, NNSA would be “rebalancing the ICF Program to strengthen long-term support for Stockpile Stewardship Program efforts, as well as responding to higher NNSA priorities.” A separate summary document refers to LLE as “aged,” although that descriptor does not appear in the full budget document.

LLE is home to the Omega Laser Facility, which is one of NNSA’s three major facilities for conducting high energy density experiments, alongside NIF and the Z Pulsed Power Machine at Sandia National Laboratories. As part of the Stockpile Stewardship Program, these facilities contribute to the experimental validation of nuclear weapons simulations codes in the absence of explosive nuclear testing, which the U.S. suspended in the early 1990s.

NIF has attracted criticism in recent years, due to its inability to date to achieve its eponymous goal of fusion ignition. However, NNSA still appears committed to the concept, with the budget document stating that “the achievement of laboratory-scale thermonuclear ignition is an important objective of the SSP and is a scientific ‘grand challenge’ problem that tests our codes, our people, our facilities, and our integrated capabilities.”

Nevertheless, the proposal would cut NIF’s $330 million budget by over 10 percent and LLE’s $68 million budget by a third. Combined with an associated cut to laser target production, NIF would field about a quarter fewer experiments. The $78 million Ignition subprogram would be slashed by almost three-quarters, resulting in NNSA suspending research on the laser direct-drive design concept and placing the “emphasis of ignition R&D” on laser indirect drive concept development and magnetic direct-drive platforms.

The $10 million High Energy Density Laboratory Plasmas (HEDLP) subprogram, which funds academic users of the facilities in partnership with the DOE Office of Science, would be eliminated. Amid these and other cuts, however, there would be a “modest increase” in the number of experiments conducted at the Z machine.

The directors of NIF and LLE have sharply criticized the ICF budget request. LLE Director Michael Campbell told Physics Today that he was “completely surprised” by the proposal, saying that it was not discussed with lab leaders. NIF Director Mark Herrmann testified about the negative ramifications of the ICF budget at a House Science Committee hearing held yesterday. For instance, Herrmann stated that the cuts to LLE and HEDLP would “cripple our academic partners and could lead to the loss of a generation of graduate students doing research in the field of HED science and discourage students and early career scientists from pursuing careers in this area of HED science.”

The proposed withdrawal from LLE has also generated swift blowback from members of the New York congressional delegation, with Senate Minority Leader Chuck Schumer (D-NY) vowing to fight to keep the lab open. On March 5, Schumer unveiled a “three-pronged push” to not only save the lab but also increase NNSA funding for the facility. 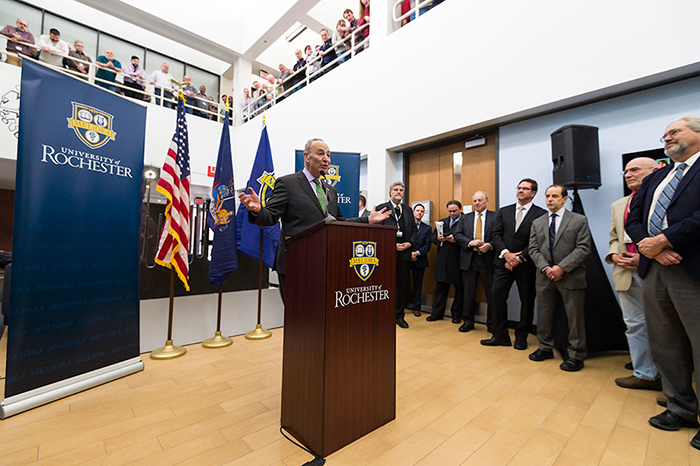 Schumer described his plan to keep federal funding flowing to the Laboratory for Laser Energetics during a March 5 event at the lab.

Funding for the Science program would rise nearly 30 percent over the fiscal year 2017 enacted level to $565 million. Much of the increase would go towards the new Enhanced Capabilities for Subcritical Experiments project, for which NNSA requests $118 million.

In justifying the project, the budget document states that NNSA lab leaders have identified both a “physics gap” in NNSA’s ability to study the final stages of plutonium implosions and a “gap in experimental capabilities needed to develop the next generation of weapon designers in the absence of underground nuclear testing.” As a part of this project, NNSA is developing a radiographic system that will diagnose late-stage dynamics in plutonium experiments and a new measurement technology named Neutron-diagnosed Subcritical Experiments.

The budget also includes a $25 million increase for the Dynamic Materials Properties subprogram to accelerate the pace of subcritical experiments conducted at the Nevada National Security Site’s U1a facility. Within the Infrastructure and Operations account, NNSA requests $53 million for the U1a Complex Enhancements Project, more than twice the amount sought last year, which will go toward construction of a new underground lab that “enables new experimental and diagnostic capabilities and an increased operational cadence of subcritical weapons experiments using plutonium.”

The Engineering program budget would increase by 60 percent over the current level to $211 million, and all subprograms would receive funding increases. Most notably, NNSA requests $34 million for the new Stockpile Responsiveness Program, which received an initial appropriation of $2 million in fiscal year 2017.

The program is designed to ensure that scientists and engineers have opportunities to exercise the full set of skills required to create new types of nuclear weapons if needed. It is called out prominently in the Trump administration’s Nuclear Posture Review as a key component to making the nuclear enterprise more able to react to geopolitical or technological shifts. Accordingly, NNSA states that a main goal of the program is to “examine ways to accelerate the research cycle to enhance the country’s ability to respond to uncertainty.”

Funding for the Advanced Simulation and Computing program would rise by 6 percent over the current level to $703 million. Within this amount, NNSA would contribute $163 million toward the Exascale Computing Initiative, a joint effort with the DOE Office of Science to field at least one exascale-capable computing system by 2021.

Articulating a need to remain abreast of state-of-the-art technologies amidst a “global shift in fundamental computing architecture,” NNSA warns that its capabilities are “beginning to experience the effects of obsolescence as high performance computing technologies continue to advance and evolve to radically different and more complex architectures.”

In addition to its weapons-focused R&D activities, NNSA funds a host of efforts aimed at reducing the risk of bad actors acquiring nuclear materials. The overall budget for these activities would remain about flat at $1.9 billion under the proposal.

The biggest point of contention between the administration and Congress will again likely center on the Mixed Oxide Fuel Fabrication Facility, a long-delayed project to convert surplus weapons-grade plutonium into commercial nuclear fuel. As it did last year, the administration proposes to terminate the project and instead pursue a “dilute and dispose” approach, which it argues will be much cheaper. The Obama administration also proposed to end the project in its budget request for fiscal year 2017, but Congress ultimately appropriated funds to continue constructing the facility.