The National Oceanic and Atmospheric Administration’s overall budget is decreasing 1% to $5.35 billion under its newly enacted appropriation for fiscal year 2020. However, as the agency's budgetary needs for satellite acquisition decline, funds are freeing up for other activities, with offices across the agency seeing increases of 4% to 5%.

The outcomes for most major NOAA accounts fall between the original House and Senate proposals. For instance, the Office of Oceanic and Atmospheric Research will receive a 4% increase, well short of the 14% boost sought by the House. The legislation also includes funding to launch a new weather forecast innovation initiative and begin assessments of geoengineering techniques. 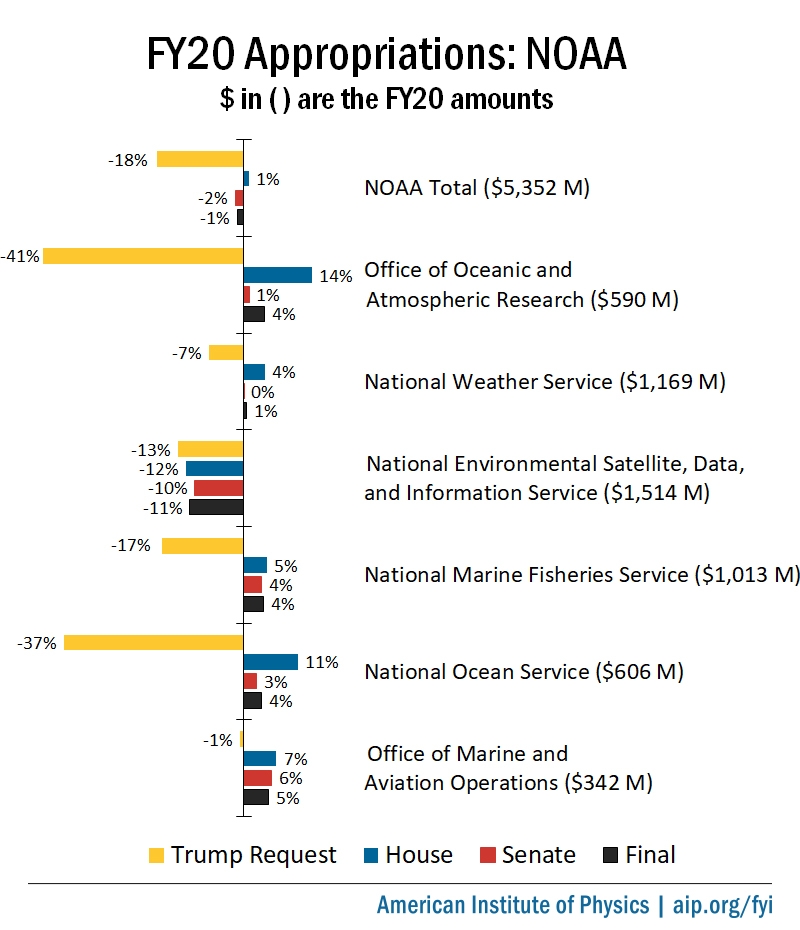 An explanatory statement accompanying the final bill provides funding and policy direction, and the House and Senate appropriations committee reports on their respective spending bills convey additional direction unless the language is negated in the final statement. For summary tables, consult the FYI Federal Science Budget Tracker.

The Office of Oceanic and Atmospheric Research funds a broad portfolio of in-house and extramural research on weather and climate modeling, coastal resilience, and ocean exploration, among other topics. Congress rejected the administration’s proposal to sharply cut back funding for the office and instead provides moderate increases to all programs except Weather and Air Chemistry, which received a slight cut. 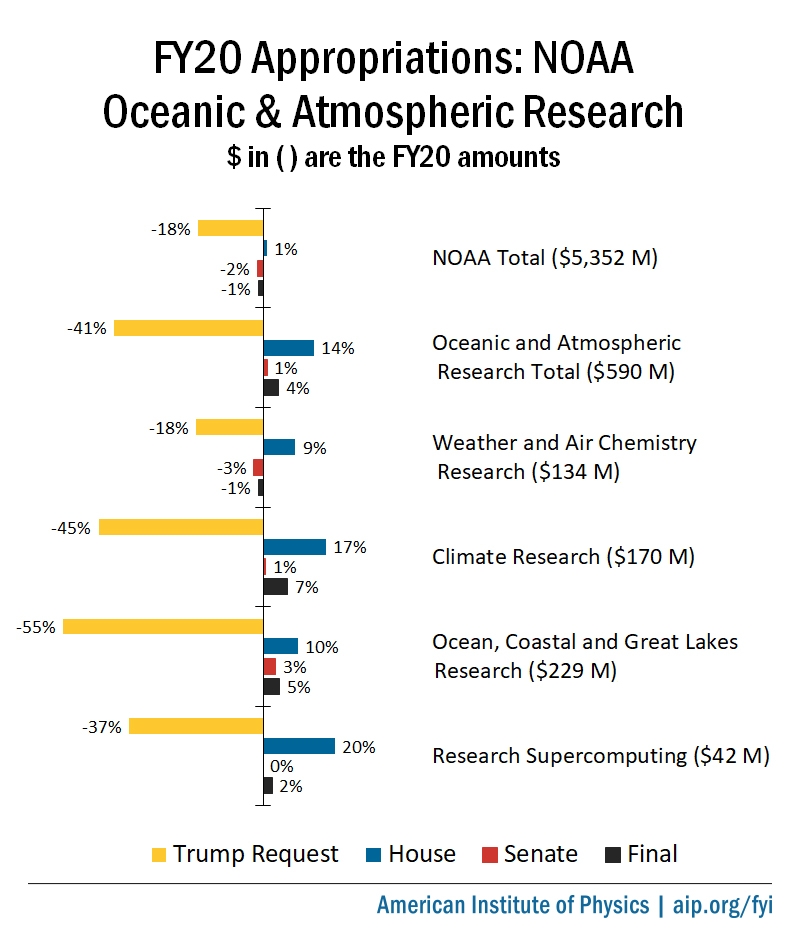 Earth Prediction Innovation Center. To address persistent challenges in translating research advances into operational weather forecasts, NOAA is planning to crowdsource model code development through an Earth Prediction Innovation Center (EPIC) and requested $12 million for the project through the U.S. Weather Research Program. Congress directs NOAA to allocate at least $8 million to EPIC this year, though it stipulates the funding is contingent on the agency submitting a five year strategic plan detailing an investment strategy and quantitative goals for forecast improvement. (NOAA released a draft five year plan in January.)

Geoengineering. Congress directs NOAA to allocate at least $4 million for “modeling, assessments, and, as possible, initial observations and monitoring of stratospheric conditions and the Earth's radiation budget.” It stipulates that this new funding stream include a study of the impacts of introducing material into the stratosphere through “changes in natural systems, increased air and space traffic, proposals to inject material to affect climate, and the assessment of solar climate interventions.” It also directs NOAA to use the funds to “improve the understanding of the impact of atmospheric aerosols on radiative forcing, as well as on the formation of clouds, precipitation, and extreme weather.” Both the House and Senate reports draw attention to a forthcoming National Academies study that will establish a research agenda and outline governance approaches for solar geoengineering, with the House stating further research is required to address “significant risks posed by the potential introduction of material into the stratosphere.”

Climate research. Funding for the Climate Research program is increasing by 7% to $170 million, with the new resources distributed across accounts that fund labs and cooperative institutes, climate information services, and competitive grants. Congress directs NOAA to allocate at least $3 million for its contribution to the National Climate Assessment, which the administration had proposed eliminating as a dedicated line item. It also provides a $1.5 million increase for the Regional Integrated Sciences and Assessment program to expand the geographic coverage of climate information tools for local decision makers. The House report “reminds” the agency that the program is meant to be “customer-focused rather than purely in the pursuit of science.”

Research computing. The budget for High Performance Computing Initiatives is increasing from $12 million to $17 million, with Congress directing that NOAA allocate at least $5 million towards a transition to using cloud computing for research needs. In addition, it requires that NOAA develop strategies for cloud computing and supercomputing, to be conveyed to Congress in a single report. Meanwhile, the budget for acquiring supercomputing systems is increasing by $1 million to $42 million, with a quarter of the funds withheld until NOAA provides a detailed spending plan to Congress. 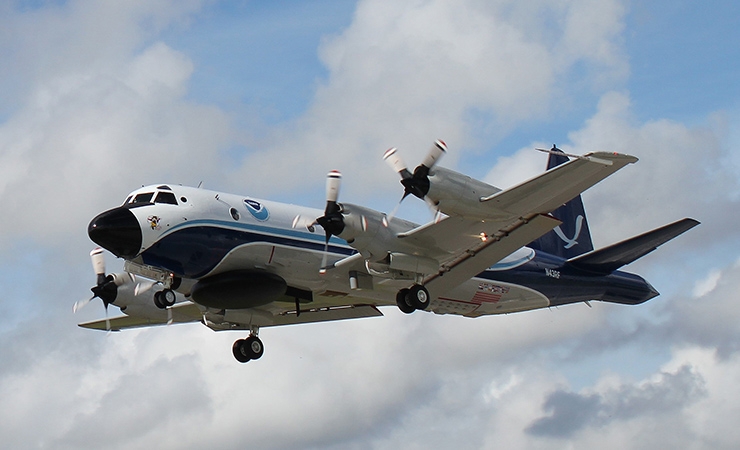 The budget for the National Weather Service (NWS) is rising 1% to $1.17 billion, short of the 4% increase the House proposed but more than the flat funding proposed by the Senate.

Observations. The enacted budget for observing systems remains flat at $246 million, with a $5 million increase in operations funds offset by a $5 million decrease in procurement funds. Congress directs $1 million of the increase toward expansion of the National Mesonet Program, which provides local and regional data that supplement federal weather observations. The Senate report directs NOAA to increase coverage in “high-risk areas” and work with agencies such as the National Science Foundation to identify potential observing platforms in data-sparse regions.

Hurricane and tsunami programs. The appropriation provides “no less than” the fiscal year 2019 enacted budget for the Tsunami Warning Program. Via the Senate report, NWS is directed to expedite the Hurricane Forecast Improvement Project to reduce errors in track and intensity forecasts and to expand existing collaborations with academia to improve storm surge modeling.

National Water Center. Via the Senate report, NWS is directed to transfer staff to the National Water Center as necessary for it to achieve full operational capability as the agency’s “center of excellence for water resources prediction and related decision support services.” It also provides an unspecified increase over the fiscal year 2019 enacted budget to “expedite development of the National Water Model and other next-generation water modeling capabilities.”

The budget for the National Environmental Satellite, Data, and Information Service (NESDIS) is decreasing 11% to $1.51 billion, with the drop largely due to planned ramp-downs of acquisition programs for next-generation geostationary and polar-orbiting satellites.

Weather satellites. Funding for the Geostationary Operational Environmental Series (GOES) is dropping by a quarter to $304 million as that acquisition continues. NOAA has delayed the launch of the third satellite in the series after instrumentation problems inhibited GOES-17, which launched in 2018, from operating at full functionality. Congress also accepts the proposal to establish a single budget line for the Joint Polar Satellite System acquisition program, funding it at $745 million. The combined budget for polar satellite acquisition last year was $878 million.

Meanwhile, funding for NOAA’s program to acquire new capabilities for space weather monitoring will more than double to $64 million. Both the House and Senate reports also direct NOAA to prepare to place a coronagraph on the GOES-19 satellite, and the Senate report further states it expects the agency to proceed apace with the planned acquisition of a standalone space weather monitoring satellite to be placed at a Lagrange point between the Earth and the Sun.

Commercial weather data. Congress meets NOAA’s request for $3 million to continue the Commercial Weather Data Pilot program and $5 million to purchase commercial radio occultation data for operational use. NOAA has been assessing the feasibility of ingesting commercial data into its weather forecasts for several years, and the administration plans to ramp up its budget request for data purchases in future years.

5G spectrum interference. NOAA has been grappling with the prospect that out-of-band emissions from 5G telecommunications technologies could interfere with weather satellite instruments that rely on the 23.6–24 GHz spectrum band to measure water vapor. Accordingly, Congress directs NOAA to estimate how much its weather forecasting skill will be degraded under the out-of-band-emissions limits adopted at the World Radiocommunication Conference last year. The report is also required to estimate “costs to procure supplementary observations or to modify affected instrumentation on planned polar orbiting satellites.” Congress further directs NOAA to engage with the National Telecommunications and Information Administration to review assumptions concerning the “commercial deployment of 5G telecommunications networks over the life of these satellites; analysis methodology; and interference protection criteria; as well as to verify intermediate results.”

Office of Education. The budget for the Office of Education is increasing by $1.7 million to $30.2 million, with the new funds distributed across programs supporting minority serving institutions, environmental literacy, and scholarships. The appropriations legislation also renames the minority serving institutions program after Rep. José Serrano (D-NY) in honor of his “steadfast leadership and support for increasing the participation of underrepresented communities in the sciences.” Serrano chairs the appropriations subcommittee for NOAA in the House and is retiring at the end of his current term.

Sexual harassment. Congress directs that NOAA allocate at least $2 million to sexual harassment risk reduction and victim counseling efforts. The House report notes that appropriators are “highly concerned by the threat of sexual assault and sexual harassment faced by individuals in the workplace, especially those in non-traditional work settings such as NOAA research vessels or private fishing vessels.”