The House and Senate are proposing to partially roll back recent increases to the Department of Defense’s early-stage research programs, though they split on support for basic research.

The Department of Defense’s $109 billion budget for research, development, test, and evaluation (RDT&E) activities would drop by about 1% under the House and Senate’s spending proposals for fiscal year 2021, capping off a five-year period in which it surged up from about $66 billion.

Within the RDT&E total, DOD’s portfolio of basic research, applied research, and advanced technology development — referred to as the Science and Technology program — has grown over the past five years from about $12 billion to $16 billion. The Trump administration requested to roll this funding back to $14 billion, and the House and Senate bills would only partially overturn the proposed cuts, as shown in the charts below.

The House and Senate committee reports detail how they propose allocating funding across military service branches and agencies. Summary-level figures are collected in the FYI Federal Science Budget Tracker. 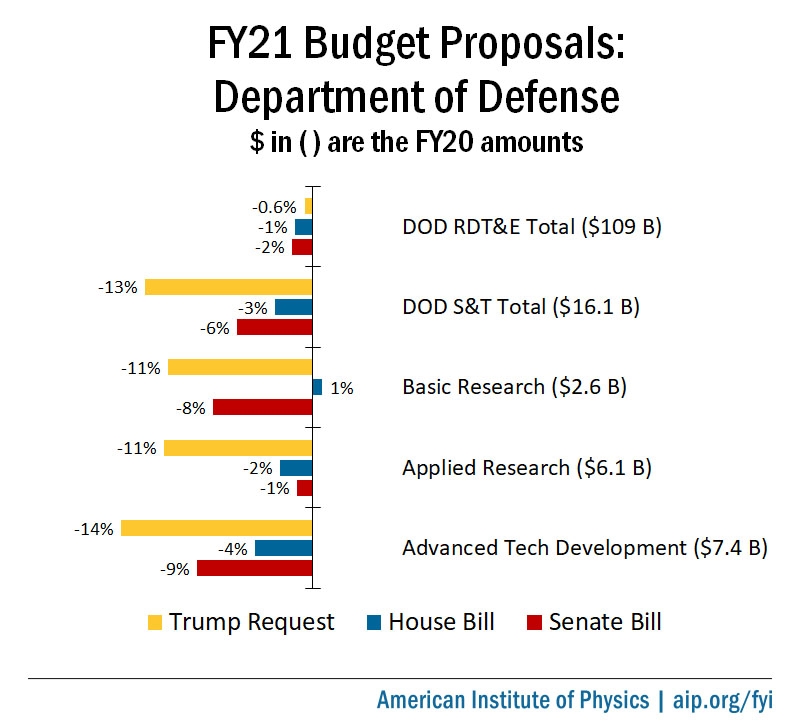 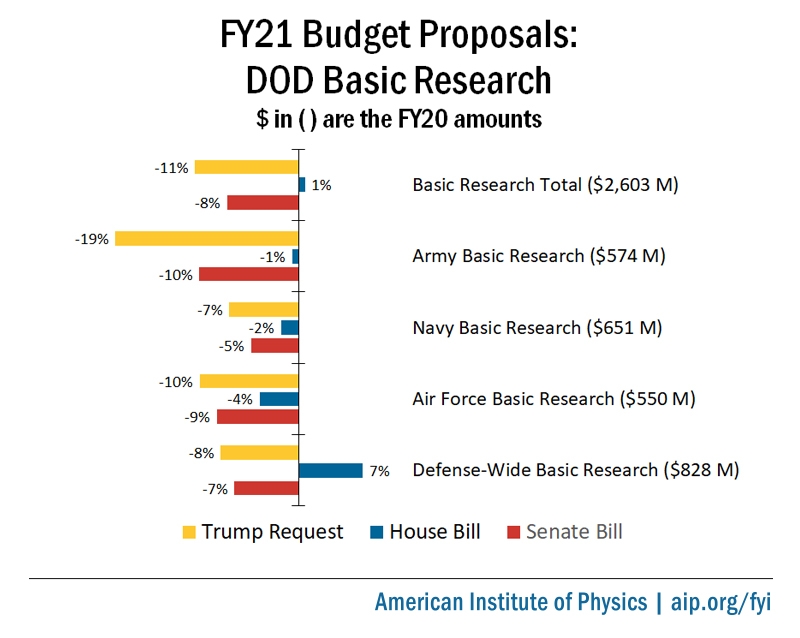 DARPA. Amid its proposed cuts to basic research, the administration did seek a 10% increase to $534 million for basic research funding at the Defense Advanced Research Projects Agency. The House matches this request, while the Senate proposes a smaller increase to $514 million. Total funding for DARPA would increase about 1.5% to $3.5 billion under the House’s proposal and 1% under the Senate’s.

Social science research. Based on a cross-department prioritization exercise known as the Defense Wide Review, DOD proposed to defund the Minerva Research Initiative, which supports social science projects. The House explicitly rejects the proposal, specifying $17 million for the program within a proposed topline of $68 million for DOD’s Basic Research Initiatives account. The Senate proposes only $48 million for the account and does not specify funding for Minerva.

STEM education. The Senate would accept the administration’s proposal to roll back the budget for the National Defense Education Program from $144 million to $100 million, while the House would only make a $7 million cut. The program supports STEM talent development through scholarships and fellowships, STEM outreach to children of military families, and initiatives such as the Manufacturing Engineering Education Program.

Minority-Serving Institutions. The House proposes to expand dedicated support for basic research at Minority-Serving Institutions from $53 million to $81 million, building on a recent increase that Congress directed toward the creation of four research centers focused on artificial intelligence, aerospace, quantum sensing, and communications technologies. Meanwhile, the Senate proposes $51 million for the program. 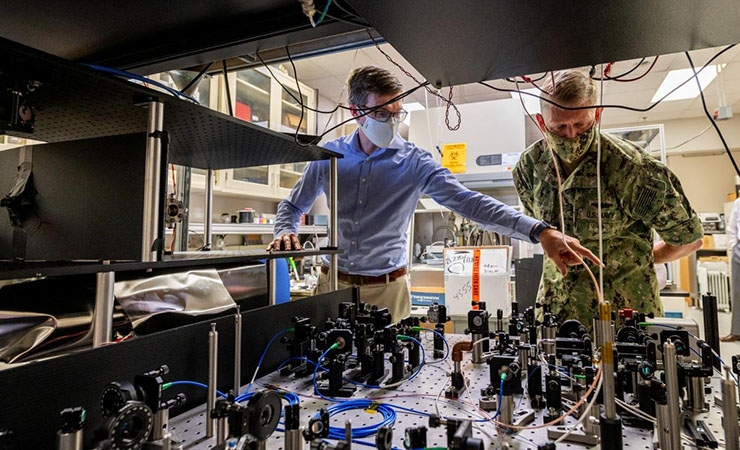 Quantum information science. DOD funding for QIS research is distributed across many programs and the department does not report an overall figure. In recent years, though, Congress has singled out specific initiatives for support. Last year, it specifically provided the Air Force $8 million to set up a new quantum information science research center and $4 million for quantum communications research within the Dominant Information Sciences and Methods program. This year, the House and Senate both propose $10 million for each of these activities.

5G communications. The Senate matches DOD’s request to increase the budget for its Next Generation Information Communications Technology Program from $200 million to $449 million and to create an associated $35 million early-stage R&D program. Together these programs comprise a new initiative known as “5G to Next G.” According to the request, the new program opens up a focus on technologies beyond 5G, working with agencies such as the National Science Foundation and National Institute of Standards and Technology on millimeter-wave technology, multi-antenna systems, and dynamic spatial spectrum reuse, among other topics. The House proposes $430 million and $17.5 million for the two programs.

Micro nuclear reactor. The Senate allocates $70 million for the DOD Strategic Capabilities Office’s effort to develop a mobile nuclear reactor, known as Project Pele, up from the $63 million specified last year. Meanwhile, the House allocates $40 million for developing a prototype reactor and $10 million for producing the pelletized, meltdown-resistant fuel it will employ, up from the $5 million specified for fuel development last year. Raising concerns that DOD “has not established an executive agent to direct the microreactor program and has not secured fuel stocks,” the House also directs the department to detail its management, procurement, and deployment strategy for the reactors.

Directed energy. Applauding DOD’s increasing focus on developing directed energy technologies such as lasers and microwave beams, the Senate includes $2.5 million above the budget request for the department to create a Directed Energy Center of Excellence. It specifically encourages the Air Force to establish “one or more centers focused on directed energy research, education, testing, and technology transfer.”

Cooperative Threat Reduction program. The Senate accepts DOD’s request to cut the budget for its Cooperative Threat Reduction program by 36% to $238 million, while the House would only allow for a 4% cut. The program funds international efforts to secure and eliminate items such as nuclear material, chemical agents, and biological pathogens. DOD’s proposal stems from its Defense-Wide Review, which recommended eliminating program activities focused on “low-to-near zero probability threats.”

Research security. The House matches DOD’s request to increase funding from $21 million to $30 million for a recently established program called “Maintaining Technology Advantage,” comprising several research security efforts, while the Senate proposes $26 million. Through the program, DOD is developing security policies tailored to specific technologies, such as by creating “Technology Area Protection Plans” that will export controls and foreign investment reviews, among other actions.