The Department of Defense is seeking a marginal decrease in its Research, Development, Test, and Evaluation budget, which is currently at a record-high level of $109 billion. Prioritizing work on near-term technologies, the department proposes a 13% cut for its early-stage Science and Technology accounts.

The Trump administration is seeking about $108 billion for Department of Defense Research, Development, Test, and Evaluation activities in its fiscal year 2021 budget request. The proposal for essentially flat funding caps a period in which Congress leapfrogged a series of DOD requests for budget increases, driving RDT&E spending from $66 billion in fiscal year 2015 to its current historically high level of almost $109 billion. 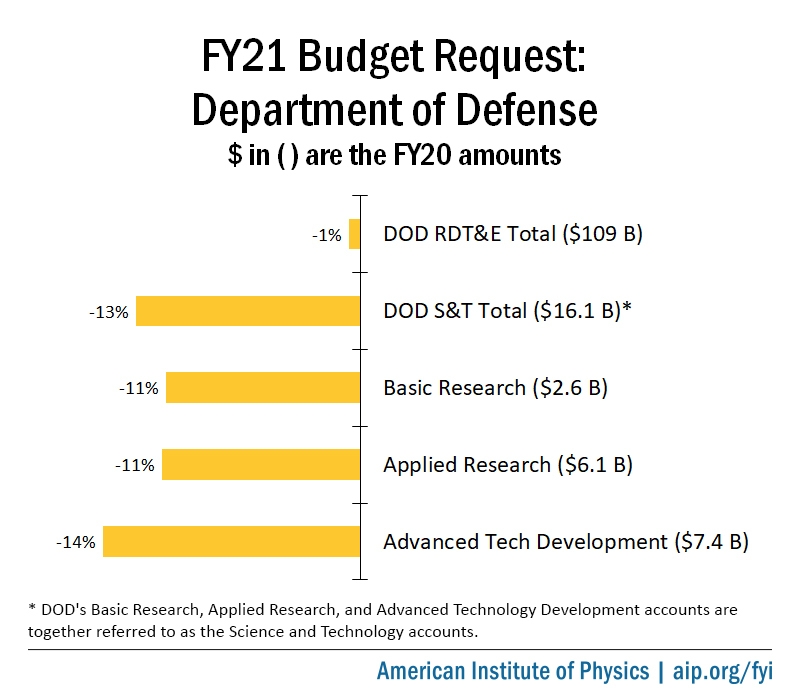 Echoing its previous proposals, DOD is seeking less than the enacted amounts for early-stage R&D, requesting a total of about $14 billion for its Basic Research, Applied Research, and Advanced Technology Development accounts. The administration’s emphasis on later-stage prototyping, testing, and evaluation activities is consistent with DOD’s recent prioritization of advancing cutting-edge technologies into use.

In recent written testimony to the House Armed Services Committee (HASC), DOD Under Secretary for Research and Engineering Mike Griffin provided an update on the department’s technology development priorities, stressing those with the best near-term prospects. He also outlined DOD’s ongoing efforts to develop the STEM workforce, shore up the U.S. national security innovation base, and secure DOD-funded research against exploitation by foreign governments.

Summary figures from the request and previous appropriations for R&D programs across military service branches are available in FYI’s Federal Science Budget Tracker.

Basic research. Overall funding for DOD’s Basic Research accounts would drop 11% to $2.32 billion under the request, with cuts spread across military service branches. Within the Office of the Secretary of Defense, DOD proposes cutting the Basic Research Initiatives account in half to $36 million. Of that amount, $32 million would go to the Vannevar Bush Faculty Fellowship program and the pilot Laboratory University Collaboration Initiative. DOD seeks no funding for Defense EPSCoR, a program that provides grants in regions receiving smaller shares of federal research funding. The request notes that the $12 million provided for the program in each of the last two years was added by Congress. The department also seeks no funding for the Minerva Research Initiative, which supports social science research projects, noting it was recommended for elimination by a recent cost-cutting exercise called the Defense-Wide Review.

National Defense Education Program. DOD proposes to roll back funding for its National Defense Education Program from $144 million to $100 million. Congress has driven recent increases to the program’s budget, which have gone toward initiatives such as funding DOD’s Manufacturing Engineering Education Program and increasing the number of STEM scholarships offered through the federally endowed Barry Goldwater Foundation. Although DOD’s proposal would pare back these sorts of special initiatives, it would boost base funding for its Science, Mathematics, and Research for Transformation (SMART) scholarship program from $71 million to $77 million, continuing a run of recent increases. Also, although a congressionally mandated pilot program that provides STEM learning opportunities at schools attended by dependents of military personnel is set to expire soon, DOD plans to fully incorporate that activity into its ordinary STEM education and outreach program.

Minority Serving Institutions. DOD is requesting $31 million for its program to support Historically Black Colleges and Universities and other Minority Serving Institutions, about the same as it requested last year. However, Congress has recently exceeded the administration’s requests for the program, ramping up funding to its current level of $53 million. DOD indicates it plans to use the extra funding this year in part to establish three new research centers dedicated respectively to aerospace research and education, materials science, and biotechnology. The request notes the department is planning additional such centers dedicated to artificial intelligence and machine learning, biotechnology, quantum science, and fully networked command, control, and communications.

Within the Office of the Secretary of Defense, DOD proposes increasing funding from $21 million to $30 million for a recently established program called “Maintaining Technology Advantage,” comprising several projects focused on protecting U.S. science and technology from exploitation by foreign governments.

Technology Area Protection Plans. DOD requests $9 million to develop security policies tailored to specific technology areas with the aim of ensuring “accountability for mitigating adversary exploitation.” Among the activities associated with this effort are the development of “threshold determinations” for what constitutes Controlled Technical Information in the context of grants and contracts. Another activity is the creation of “Technology Area Protection Plans,” which DOD anticipates will have “broad impacts” on government efforts to secure critical technologies, including “export controls, Committee on Foreign Investment in the United States (CFIUS) mitigations, Foreign Investment Risk Review Modernization Act (FIRRMA) decisions, international agreements, counterintelligence and law enforcement priorities, and development of protection practices with DOD research performers.” Griffin told HASC these plans are a new effort that responds to a congressional mandate to develop lists of critical technologies requiring protection.

Technology Innovation Base. About $7 million is requested for a new project called the Technology Innovation Base that addresses a separate congressional mandate to assess U.S. competitiveness in key national security technology areas. According to the department, the effort aims to develop strategies for striking a “balance between promotion of the innovation base while protecting the technology from interference or exploitation by foreign competitors.” It will also manage the DOD research and engineering enterprise’s responsibilities for CFIUS reviews, which can block certain business transactions on national security grounds. 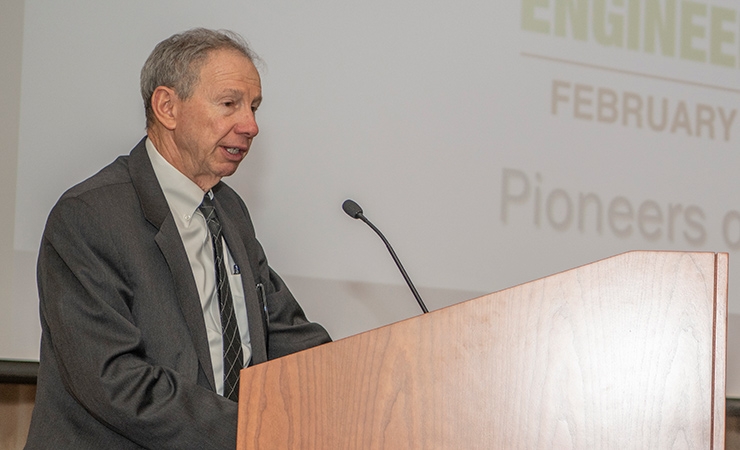 Under Secretary of Defense for Research and Engineering Mike Griffin speaks at a National Engineers Week event in February 2020.

Protecting extramural research. Griffin told HASC that DOD is participating in interagency efforts to develop policies for protecting “open research” at universities and other institutions. He recounted, “In March 2019, we issued instructions to our partners in academia, requiring that key research personnel funded by DOD grants, cooperative agreements, Technology Investment Agreements, and other non-procurement transactions disclose all current and pending projects and funding sources. We are revising research grant and cooperative agreement procedures to exclude research funding for individuals posing an unacceptable risk to national security or who participate in foreign talent recruitment programs. In addition, DOD is encouraging academic institutions, associations, and councils to develop training modules for faculty to explain more clearly the landscape of threats to research integrity.”

Sustaining scientific exchange. Griffin stressed that protection policies must be appropriately tailored, writing that an “uncoordinated, broad-brush approach to technology protection can result in damaging consequences that limit our ability to engage with and benefit from leading-edge research.” He observed, “Today’s U.S. universities welcome a high percentage of international students, scientists, professors, and industry collaborators, even as our adversaries recruit U.S. and foreign personnel for the benefit of their global dominance. Our strategic imperative is to continue to draw the best high-skilled talent to the U.S. research enterprise. … We want these talented individuals to come here, to stay here, and to choose to work with us no matter where they were born.” These remarks contrast with Griffin’s rhetoric two years ago, when he suggested to HASC that the U.S. could consider significantly reducing the admission of students from China.

Space-based missile detection. DOD seeks to increase funding for the Next-Generation Overhead Persistent Infrared (Next-Gen OPIR) satellite constellation from $1.47 billion to $2.32 billion. The system is intended to succeed the current Space-Based Infrared System as a ballistic missile early warning system and comprises a significant fraction of the Space Force RDT&E budget. The project is employing special rapid acquisition authorities and the Department of the Air Force, which oversees the Space Force, regards the project as a “pacesetter” that will demonstrate how it can speed up technology development more generally. However, Next-Gen OPIR has already fallen behind its originally envisioned schedule and Will Roper, who directs the Air Force’s RDT&E programs, told reporters the substantially higher funding level is intended to ensure the project will meet the revised target date of 2025 for its first launch.

Hypersonics. According to Griffin’s HASC testimony, DOD is seeking to increase its total spending on hypersonics from $2.7 billion to $3.2 billion. As an example of priority work in the area, he cited plans to accelerate a hypersonic weapon the Army is developing and for which DOD is seeking to double funding to $801 million. Griffin further stated, “We are also moving towards flight testing of many of our hypersonic weapon system prototypes in 2020. We intend to conduct approximately 40 flight tests over the next four years, with the goal of delivering new capabilities to our warfighters years earlier than previously planned.” Last month, DOD announced a successful test of the common hypersonic glide body, which will be used for multiple hypersonic weapon systems. DOD is also investing in more foundational R&D capabilities such as a new quiet Mach 10 wind tunnel, for which it recently awarded a $10 million contract to the University of Notre Dame. 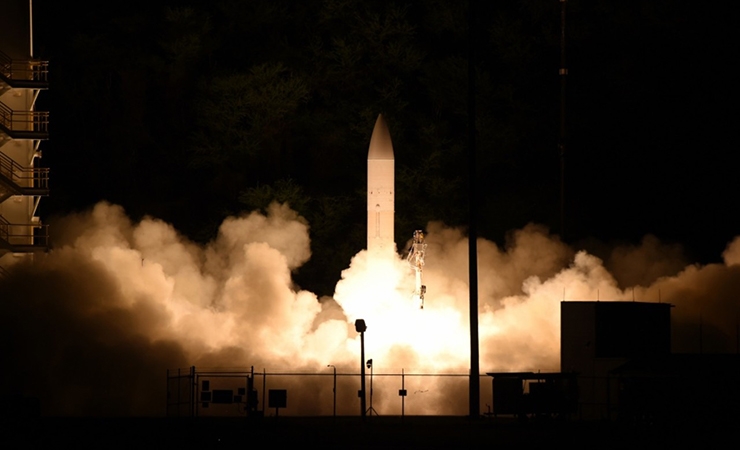 Directed energy weapons. Griffin reported that the Navy is planning to test new laser and high-power microwave weapon prototypes at sea in 2020 and 2021. In addition, the Army and Navy are aiming to accelerate such weapons for integrated air-and-missile defense systems with initial operational capability by fiscal year 2022. Griffin also reiterated statements he made to HASC last year that DOD’s Laser Scaling Program is working toward building more powerful weapons, including a 300 kilowatt laser by 2022 and a 500-to-1000 kilowatt laser within the next decade. DOD is asking Congress to increase the scaling program’s budget from $81 million to $105 million.

Quantum information science. Describing DOD’s priorities in QIS, Griffin stated, “We will continue to emphasize atomic clocks and sensors — these quantum technologies provide the most concrete opportunities for continued warfighting advantage. Longer-term, advances in quantum computing and quantum networking may have an impact on our joint warfighting concepts. Still we caution that hyperbole surrounding these topics may be getting ahead of their military and economic utility.”

Microelectronics. Griffin told HASC that DOD’s efforts to increase the security of the microelectronics components it acquires are moving beyond a “trusted foundry” production model that is focused on building secure technological “perimeters.” He stated the department is instead taking cues from the field of cybersecurity and adopting a “zero-trust, risk-management-based approach to security along the entire life-cycle of microelectronics (to include design, manufacturing, assembly, test, and packaging), informed by data, not perimeters.” He indicated those efforts complement the Defense Advanced Research Projects Agency’s ongoing Electronics Resurgence Initiative, for which DOD is requesting $318 million. DOD proposes ramping down funding for its Trusted and Assured Microelectronics program from $722 million to $597 million.

Advanced telecommunications. DOD proposes to increase funding for its recently established Next Generation Information Communications Technology Program from $200 million to $449 million and to create an associated $35 million early-stage R&D program. Together these programs comprise a new initiative known as “5G to Next G.” Griffin told HASC the department’s current efforts are focused on developing 5G-enabled military applications and spectrum sharing between 5G and military systems. According to the request, the new program would add a focus on technologies beyond 5G, working with agencies such as the National Science Foundation and National Institute of Standards and Technology on millimeter-wave technology, multi-antenna systems, dynamic spatial spectrum reuse, and “special/spectral/network security techniques,” among other topics.

Cooperative Threat Reduction program. DOD proposes to cut the budget for its Cooperative Threat Reduction program by 36% to $238 million. The program funds international efforts to secure and eliminate items such as nuclear material, chemical agents, and biological pathogens. DOD states the proposal stems from its Defense-Wide Review, which recommended eliminating the program’s activities focused on “low-to-near zero probability threats.” However, critics have argued that cutting the program would be dangerous, as illustrated by the sweeping consequences of the current COVID-19 pandemic. The head of the Defense Threat Reduction Agency, which oversees the program, told HASC in February that it helped to identify the first case of the novel coronavirus in Thailand on Jan. 13.