The House is proposing to expand the National Institute of Standards and Technology’s research budget by 5%, emphasizing work in artificial intelligence and quantum information science.

The National Institute of Standards and Technology would see its topline budget increase $10 million to $1.04 billion under the House’s spending legislation for fiscal year 2021. As in previous years, the House rejects the steep cuts the Trump administration has proposed for the agency’s research and industry services programs, while partially accepting a reduction in facility construction funding. The Senate has yet to release its counterpart spending bills, but in previous years there have not been especially large divergences between the House and Senate proposals for the agency. 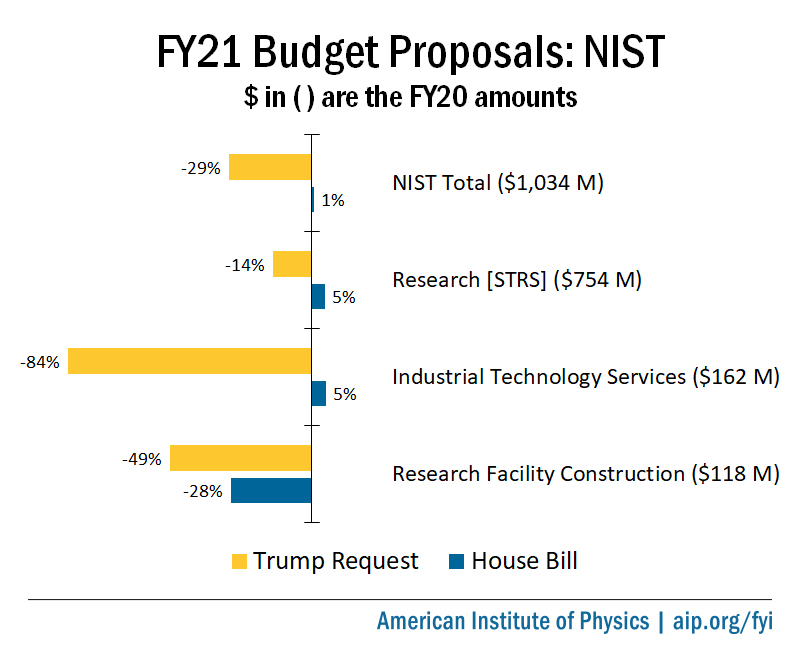 NIST’s laboratory programs are funded through the Scientific and Technical Research and Services account, which Congress increased by 4% to $754 million for fiscal year 2020. This year, the House proposes a further 5% increase to $789 million, with much of the additional funding directed toward quantum information science and artificial intelligence research.

Quantum research. The House would provide no less than $8 million above the fiscal year 2020 level of $40 million for quantum information science, and encourages the agency to expand collaborations with industry, universities, and federal laboratories. NIST is currently ramping up the activities of the new Quantum Economic Development Consortium, which established its steering committee in September. The agency has also initiated projects to develop a compact QIS-based device that could provide backup GPS capabilities and a quantum repeater, which is a key enabling technology for long-distance quantum networks.

Artificial intelligence. The House would increase funding for AI-related research efforts by at least $10 million. NIST has expanded its role in the field, partly in response to a 2019 executive order that tasked the agency with developing a “plan for federal engagement in the development of technical standards and related tools in support of reliable, robust, and trustworthy systems that use AI technologies.” The House report commends that plan, titled “U.S. Leadership in AI,” and encourages NIST to implement its recommendations. The report further directs the agency to assess the strategies of AI standards-setting entities around the world, and to establish a multi-stakeholder process for developing a “framework for managing risks related to the reliability, robustness, and trustworthiness of AI systems.” 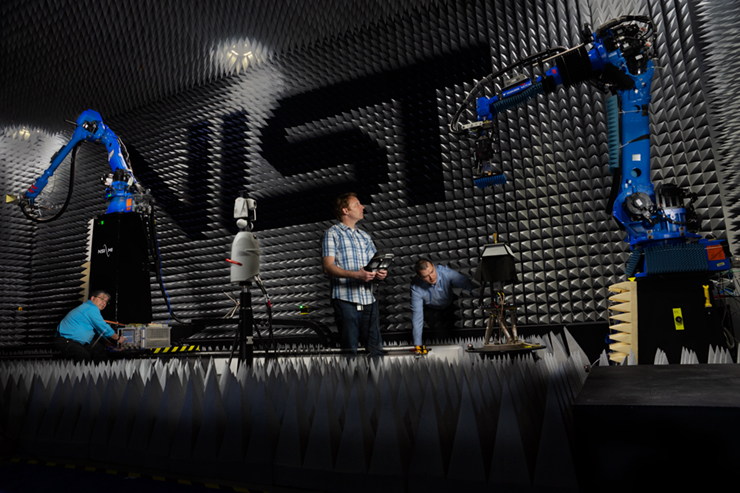 A composite photo of preparations for calibration of a reference antenna used in research by the 5G mmWave Channel Model Alliance.

Climate change. The House would provide $3.5 million for direct air capture and carbon dioxide removal research, aimed at developing relevant standard reference materials and procedures as well as increasing support for “carbonate materials development, testing, and certification for construction markets.” The House report also repeats concerns expressed last year about the adequacy of current building standards in a changing climate, calling on NIST to “identify a consistent and authoritative set of climate information that emphasizes forward-looking climate data and projections that should be utilized in the standard-setting process.” It adds that such information will help develop voluntary building standards that take into account “increasingly extreme weather events and other climate change challenges.”

Funding for NIST’s research facilities construction account would drop 28% to $85 million under the House proposal, with at least flat funding of $75 million allocated to Safety, Capacity, Maintenance, and Major Repairs. The Trump administration only requested $41 million for this account while estimating that annual funding in the range of $115 million to $144 million would be needed to address the large backlog of infrastructure maintenance projects at the agency’s campuses.

For a second year, the administration is seeking to create a Federal Capital Revolving Fund that would finance renovations of the main building on NIST’s Colorado campus. To date, neither the House nor Senate have responded to the proposal in appropriations legislation.

The House proposes to increase the Industrial Technology Services account by $8 million to $170 million, with $7 million of the additional funds allocated to the Manufacturing Extension Partnership program, which provides technical assistance to U.S. manufacturing businesses. Congress has consistently defended the program in the face of the administration’s requests to defund it, expanding its budget from $130 million to $146 million since President Trump took office.

The remaining $1 million would be directed toward NIST’s support of the Manufacturing USA network of institutes, increasing its budget to $17 million, short of the $25 million requested.