The Senate is seeking a $2 billion budget increase for the National Institutes of Health for fiscal year 2021, while the House is proposing a small increase augmented by $5 billion in pandemic-related emergency spending.

The National Institutes of Health would continue its recent string of multi-billion dollar budget increases under both the House’s and Senate’s proposed appropriations for fiscal year 2021. The Senate’s bill, released last week, proposes a $2 billion increase to $43.7 billion. The House’s bill proposes a smaller boost of $275 million, but also includes $5 billion in one-time “emergency” funding.

Republican appropriators have objected to the emergency funding mechanism, arguing it subverts the bipartisan agreement on budget caps for the year and complicates negotiations over a final appropriations measure. If lawmakers rule out the emergency mechanism, then any budget increase will compete with priorities at the other agencies that are funded through the same bill.

The House and Senate bills both propose distributing their funding increases relatively evenly across NIH institutes and centers. The following chart summarizes their non-emergency proposals for five institutes that provide substantial support to work in the physical sciences. 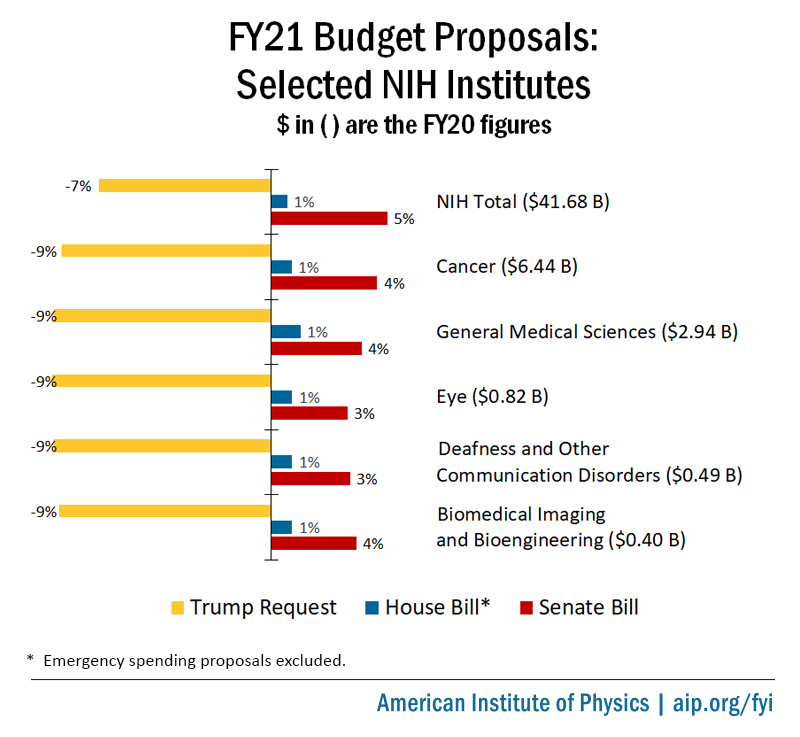 COVID-19. The House stipulates that at least half the $5 billion in emergency funds be divided among NIH’s constituent institutes and centers in proportion to their current budgets, resulting in each receiving at least a 7% budget increase. It adds that these funds “may be used to offset the costs related to reductions in laboratory productivity resulting from interruptions or shutdowns of research activity in fiscal year 2020.” In contrast, the Senate states its bill is focused on “annual funding needs unrelated to the COVID-19 pandemic” and that it intends to address pandemic-related needs through separate supplemental appropriations as necessary.

However, the Senate does propose $55 million be distributed across NIH’s network of 12 Regional Biocontainment Laboratories to support a range of disease outbreak preparedness activities. Relatedly, the House encourages NIH to increase support for Biosafety Level 4 labs, which are equipped to handle the most dangerous pathogens. 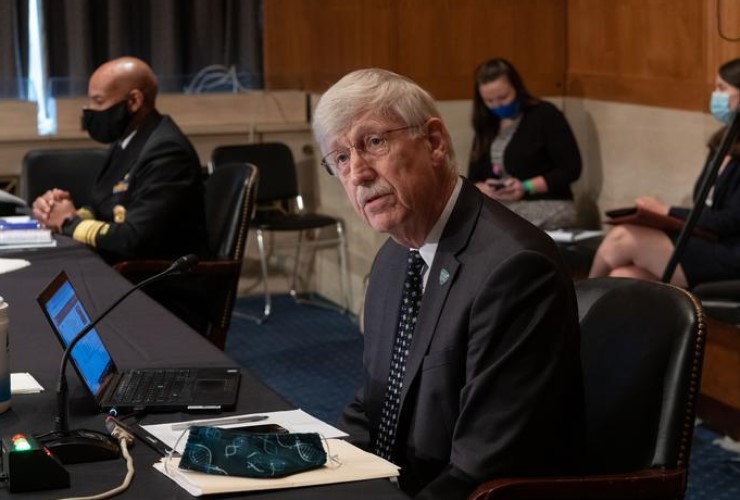 Artificial intelligence. Both the House and Senate express support for NIH's artificial intelligence research efforts, with the Senate specifically proposing $25 million in “targeted funding to bridge the gap between the biomedical and computer science communities to maximize the promise of AI.” The Senate also directs NIH to explore ways to increase university participation in national AI efforts and urges the agency to leverage investments in university-based supercomputing capabilities to help meet its expanding computational needs. NIH requested $50 million for a new effort to use AI and machine learning techniques to better understand and treat chronic disease.

Collaboration with national labs. The House report encourages NIH to continue coordinating with the Department of Energy and its national laboratories, emphasizing how their supercomputing resources could help address NIH’s “rapidly growing data and computational challenges.” Appropriators in both the House and Senate also encourage NIH to “explore novel applications for radiopharmaceuticals and leverage next-generation advanced manufacturing techniques for isotope production being made by DOE-funded research universities and national laboratories.”

Harassment. In last year’s appropriations legislation, Congress directed NIH to institute a policy requiring that institutions report when “key personnel” are removed from grants due to harassment concerns. In June, the agency updated its guidance on procedures for removing personnel from grants, specifying that requests for personnel changes should note whether the changes are related to concerns about safety or the work environment. While the House report praises NIH’s overall efforts to address harassment, it asserts the new guidance falls short. It directs the agency to “make clear that grantees must identify any changes to key personnel on an award that are related to concerns about harassment” and extend the policy to include situations where investigators are placed on administrative leave. The House also directs NIH to develop a mechanism for reporting concerns about discrimination outside the formal Title IX complaint process.

Diversity. Registering concern over a “continued lack of diversity at NIH among staff and grantees,” House appropriators direct the agency to develop a strategic plan to address racial, ethnic, and gender disparities among NIH researchers, focusing particularly on reducing barriers in access to grant funding. They also direct NIH to establish a scholarship program that encourages African American students to pursue careers in medicine and biomedical research, citing concerns over the “persistent decline of Black male physicians over the last decade.” Meanwhile, the Senate proposes to provide “targeted increases to the most effective programs that support initiatives to improve health care, education, and workforce development to people who are underserved, geographically isolated, underrepresented, or economically or medically vulnerable.” Among other proposals on the subject, it would increase funding for diversity programs within the National Institute on General Medical Sciences by $14 million to $203 million.

Racism and policing. Citing recent statements from the American Medical Association and other professional organizations declaring racism a public health emergency in the wake of protests against police brutality and racial injustice this summer, House appropriators direct NIH to submit a plan to expand its portfolio of research on racism as a social determinant of health. They also instruct the NIH Division of Police to submit their use of force data to the FBI’s National Use of Force Data Collection database and brief Congress on their reporting practices.

Research security. The Senate report states that appropriators “remain concerned about foreign threats to the research infrastructure in the United States,” particularly the impact of the Chinese government’s talent recruitment programs. It states that as of June 2020 NIH had investigated 189 scientists at 87 institutions and found that the vast majority had received undisclosed financial support from China. Accordingly, the Senate proposes providing at least $5 million to continue cooperative efforts between NIH and the national security office in its parent department, as well as another $5 million for the NIH Inspector General’s office to support additional investigations. It also encourages NIH to better protect the intellectual property derived from the research it funds by increasing the security of the peer review system and augmenting its grant application process.

Grant award justification. While expressing continued commitment to funding NIH research, the Senate asserts the agency must take steps to ensure funds are used to fulfill its core mission. Accordingly, it directs NIH to provide written justification, accessible to the public, describing how each of its grant awards “promotes efforts to seek fundamental knowledge about the nature and behavior of living systems and/or the application of that knowledge to enhance health, lengthen life, and reduce illness and disability.”

Infrastructure modernization. While both the House and Senate propose to keep base funding for NIH’s Buildings and Facilities account flat at $200 million, the Senate proposes transferring $229 million from a special fund to support additional facilities projects and the House proposes $225 million in emergency funding. In light of a 2019 National Academies report documenting pressing infrastructure needs across NIH, the agency requested base funding of $300 million to help address a backlog of maintenance and modernization projects, which it estimates will cost about $2.1 billion in total. The Senate bill would also provide all NIH institutes and centers the authority to use up to 1% of their funding for facility maintenance and construction.