The National Institutes of Health is receiving a multibillion dollar budget increase for the fifth time in a row, with its total budget increasing by 7% to $42 billion. Congress also directs the agency to adopt stronger policies regarding sexual harassment and research security.

The National Institutes of Health is receiving a $2.6 billion or 7% funding increase in fiscal year 2020, bringing the agency’s budget to $42 billion. This is the fifth year in a row that Congress has provided the agency a multibillion dollar boost. Emerging from a period when stagnant budgets significantly eroded its purchasing power, NIH is now approaching the inflation-adjusted peak appropriation that it received in fiscal year 2003. 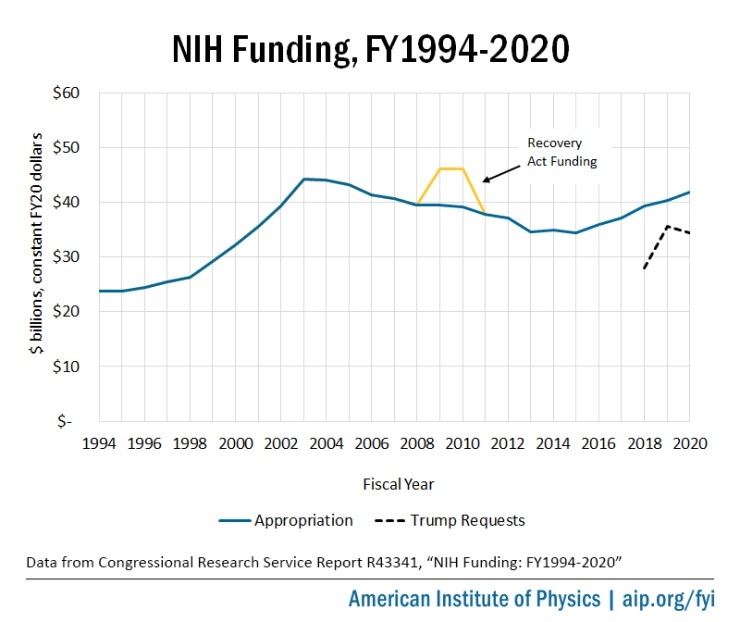 The topline increase is distributed across the agency, with Congress stating it provides for an increase of “no less than 3.3% above fiscal year 2019 to every Institute and Center to continue investments in research that will save lives, lead to new drug and device development, reduce health care costs, and improve the lives of all Americans.” 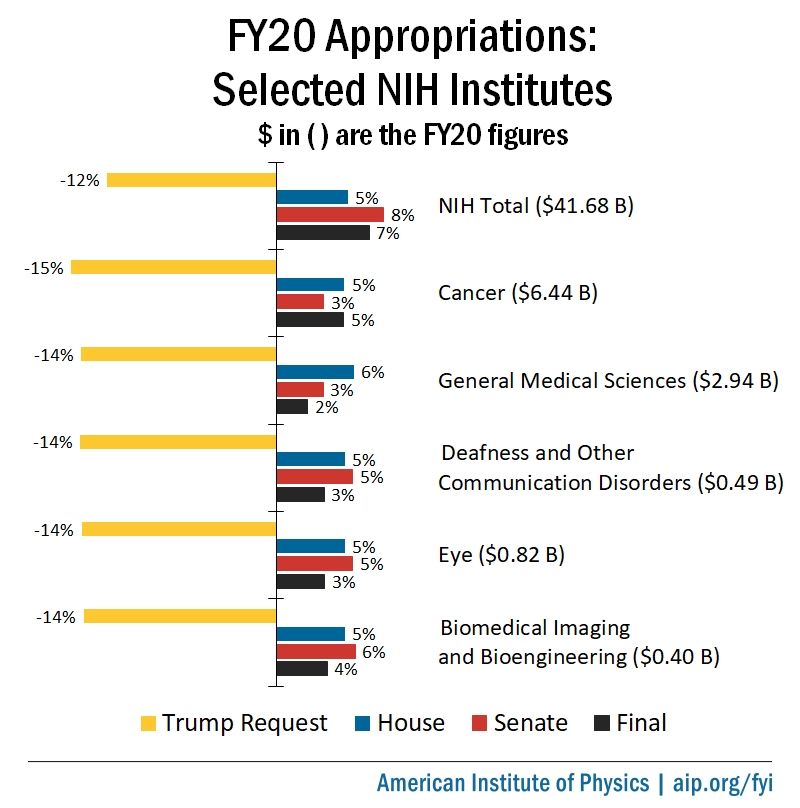 An explanatory statement accompanying the appropriations legislation provides detailed funding direction and policy guidance. The House report on its original NIH spending bill conveys additional direction unless it is negated by language in the statement. (The Senate produced a draft report for its counterpart legislation but never released an official version.)

Harassment policies. Citing a 2018 National Academies report on sexual and gender harassment in the sciences, Congress states that such harassment is “rampant” at NIH-supported institutions and calls on the agency to “play a more active role in changing the culture that has long perpetuated the problem.” It directs NIH to require that institutions report when “key personnel” are removed from an NIH grant because of harassment concerns. Congress also instructs NIH to treat harassment “with the same level of attention and resources as those devoted to other research misconduct.”

The statement omits language from the House report that would have also directed NIH to require institutions to report when key grant personnel are placed on administrative leave during harassment investigations. The National Science Foundation implemented such a requirement in its new reporting policy, and an advisory committee to NIH recommended the agency take a similar step in its report, “Changing the Culture to End Sexual Harassment,” which it released in December.

While NIH Director Francis Collins has noted that some of that report’s recommendations, including the notification requirement, will require NIH to “explore policymaking options,” he has pledged to “make every effort to adhere to the vision of the working group by seeking to implement the recommendations provided.”

Research security. Congress expresses concerns about “foreign threats to the research infrastructure in the U.S,” alleging that the Chinese government has “started a program to recruit NIH-funded researchers to steal intellectual property, cheat the peer-review system, establish shadow laboratories in China, and help the Chinese government obtain confidential information about NIH research grants.” Pointing to recommendations from an advisory committee report on research security, Congress encourages NIH to implement a “broad education campaign about the requirement to disclose foreign sources of funding and develop enhanced cybersecurity protocols.” It also directs the Office of National Security in the Department of Health and Human Services to allocate at least $5 million to the research security activities it performs on behalf of NIH.

NIH has already launched an awareness campaign regarding disclosure requirements in coordination with other federal agencies. It also has investigated more than 100 scientists it believes may have received undisclosed support from foreign institutions, diverted intellectual property, or inappropriately shared confidential grant applications. More than a dozen scientists are known to have resigned or been fired as a result of the investigations to date. NIH’s head of extramural research is scheduled to discuss the agency’s approach at a conference on Feb. 6.

Buildings and facilities. The base amount for the Buildings and Facilities account is remaining flat at $200 million, but Congress is transferring $225 million from a Nonrecurring Expenses Fund to support additional facilities projects. It also directs NIH to detail how it will implement recommendations from a 2019 National Academies report on facility repair and upgrade needs at NIH’s campus in Bethesda, Maryland. The report concluded the agency requires a $1.3 billion infusion to address the “deteriorating condition” of many of its facilities and will need additional funds in the future to avoid another buildup of deferred maintenance.

The NIH campus in Bethesda, Maryland.

Overhead costs. The legislation retains a provision from last year that restricts NIH and other agencies from changing grantee reimbursement rates for facilities and administration costs. The Trump administration had proposed sharply reducing NIH’s reimbursement rates in its first budget request, and Congress has since then blocked it from doing so.

Big data workforce. Congress provides $30 million to support NIH’s chief data strategist, noting the potential of big data and artificial intelligence to advance biomedical research. Observing that NIH has faced challenges in providing researchers with more accessible data, it suggests the problem is partly due to “salary restrictions of a civil service structure that never contemplated the costs of recruiting highly sought after elite technology talent.” Accordingly, it directs the Government Accountability Office to review how NIH currently funds computational talent through grants and to “assess the options available to NIH for securing the talent it needs.”

Platform technologies. NIH is directed to produce a report identifying challenges that limit its ability to develop “platform technologies,” which are technologies such as gene sequencers that help accelerate the pace of biomedical research by improving performance and decreasing costs. Congress suggests such challenges could include limitations in NIH’s interactions with researchers in the physical sciences, its “difficulty in supporting high-risk, high-return ideas,” its culture of prioritizing “hypothesis-driven as opposed to technology-driven proposals,” and a grant structure oriented toward work on specific diseases. The report is also to consider the potential of alternate funding models, such as incentive prizes and the program manager system used by the Defense Advanced Research Projects Agency.

DOE collaborations. The House report encourages NIH to expand collaboration with the Department of Energy in order to better leverage research capabilities at DOE’s national laboratories. Congress does not elaborate on the subject in the explanatory statement, but in its appropriation for DOE, it directed the department to respond to recommendations from a 2016 advisory task force report on the matter and describe plans to expand on existing successful collaborations with NIH. The House appropriations subcommittee for DOE is exploring the topic further at a hearing on Feb. 5.

Correction: The figure initially reported for the Buildings and Facilities account did not account for a transfer of funds from the Nonrecurring Expenses Fund at the Department of Health and Human Services.