The Trump administration’s proposed budget surge for the National Nuclear Security Administration is facing headwinds in Congress, with Democrats increasingly questioning the scope and pace of its plans to modernize the U.S. nuclear weapons enterprise.

The budget for the National Nuclear Security Administration has generated extraordinary debate this year, after disagreement within the Trump administration over its topline request spilled into public view. Reportedly, President Trump sided with NNSA Administrator Lisa Gordon-Hagerty to request $19.8 billion for fiscal year 2021, a nearly 20% increase over the current level and well above the amount initially backed by her immediate superior, Energy Secretary Dan Brouillette.

That dispute has triggered competing proposals in Congress to overhaul how NNSA’s budget is formulated. Senate Armed Services Committee Chair Jim Inhofe (R-OK) has advanced a legislative proposal that would give DOD greater say in the process, with the apparent intent of ensuring DOE requests more funding for nuclear weapons programs. In contrast, lawmakers in the House have proposed reinforcing DOE’s control over the semi-autonomous agency.

NNSA’s budget has grown by $1 billion per year on average over the past five years, as the agency has had broad backing to modernize the nuclear weapons stockpile and its associated infrastructure. However, support has frayed among congressional Democrats, who are increasingly questioning the scope and pace of aspects of those plans, such as efforts to reconstitute facilities for producing plutonium warhead cores, known as “pits.” Democrats also continue to place a higher emphasis on nonproliferation programs than the administration.

The House passed legislation this summer that would only increase the NNSA budget 8% to $18 billion for the year and would restrict DOD from influencing the agency’s budget plans. The Appropriations Committee report accompanying the bill provides additional details on the House's priorities. For program-level figures, consult the FYI Federal Science Budget Tracker. 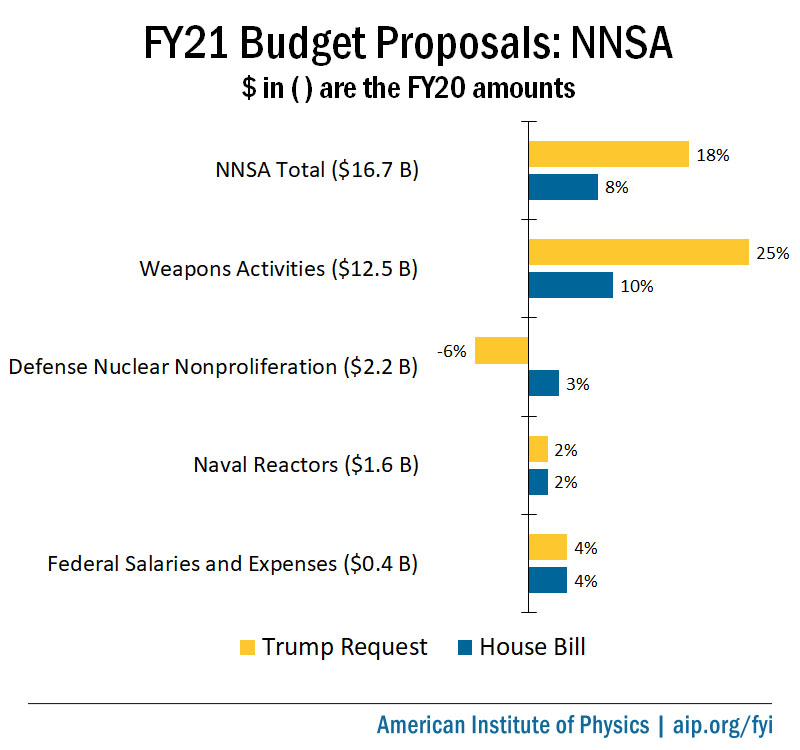 Weapon modernization. NNSA seeks to increase the Weapons Activities account by 25% to $15.6 billion, while the House bill would only provide a 10% increase to $13.7 billion. In Senate testimony last month, NNSA Administrator Gordon-Hagerty said the agency would be unable to meet DOD’s weapons requirements under the House’s proposal. She attributed the size of the requested increase in part to the agency executing four warhead modernization programs simultaneously, with a fifth proposed to begin, as well as a need to more quickly recapitalize warhead production infrastructure.

The House bill would specifically deny funding for the fifth program, arguing it lacks adequate justification. It would also provide about $300 million less than the $1.37 billion requested for reconstituting plutonium pit production capabilities at Los Alamos National Laboratory in New Mexico and the Savannah River Site in South Carolina. NNSA is aiming to produce at least 80 pits per year across both sites by 2030, per a statutory requirement, but the House report notes an independent assessment concluded in 2019 that meeting that goal is likely infeasible. Accordingly, the House requests NNSA submit a plan that addresses “options to ramp up pit production that extend the current need dates for pit production; how the hedge and fielded stockpile could be configured to serve as an interim solution; and an estimate of how many years current pit production need dates could be extended by advancing pit reuse concepts.”

R&D activities. NNSA supports a range of research, development, and simulation activities, known collectively as the Stockpile Stewardship Program, that enable the agency to certify the reliability of nuclear weapons without conducting explosive tests. The House accepts the administration’s proposal to restructure some of these activities within a new account called Stockpile Research, Technology, and Engineering, though it would only provide a 4% increase to $2.66 billion, short of the 9% increase requested. The restructuring largely involves subsuming some activities currently located elsewhere in NNSA’s budget, such as support for hydrodynamic and subcritical experiments, and establishing a new budget line focused on academic programs. 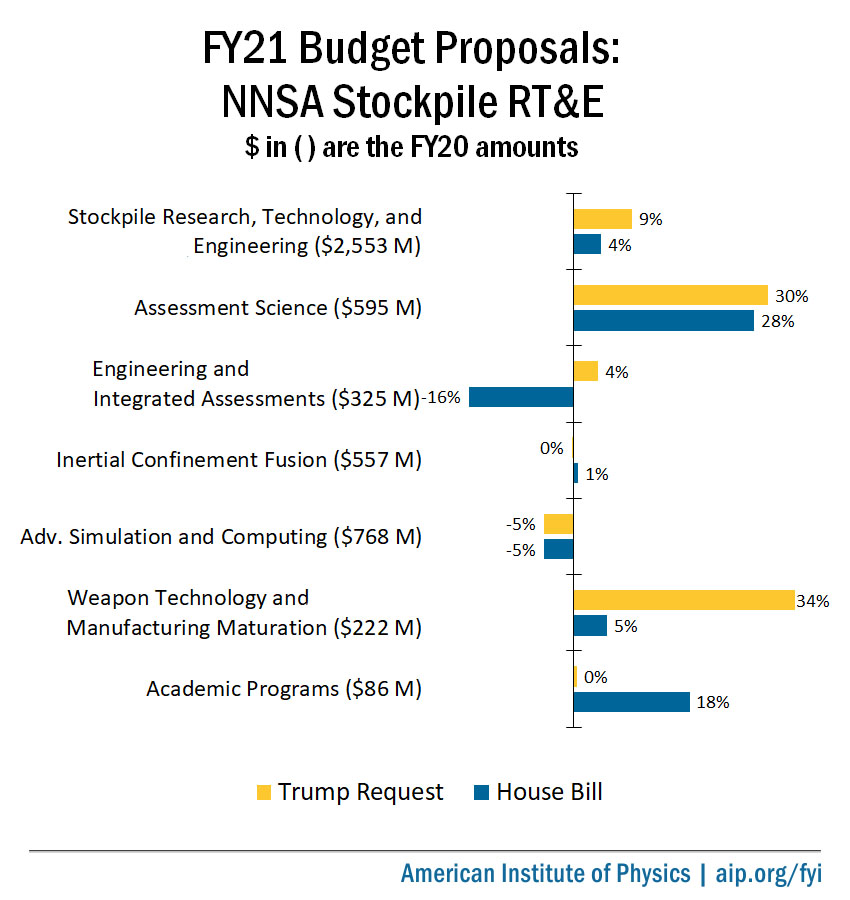 Stockpile Responsiveness Program. To complement the Stockpile Stewardship Program, Congress created the Stockpile Responsiveness Program in 2017 to offer lab personnel opportunities to exercise a broader range of skills associated with the weapons lifecycle, such as weapons design. While the program’s budget has quickly grown to $70 million, the House proposes to slash its budget to $5 million. The House report does not identify any specific reservations about the program, instead directing NNSA to provide a detailed account of current activities as well as “timely updates on the status of any new and existing taskings, studies, and assessments.” In its budget request, NNSA sought to assure appropriators that the program is not intended to “work around the established process for nuclear weapons system acquisition,” but rather “explores the art of the possible by using potential responses to future threats to explore the acceleration of design, engineering, testing, production, and qualification methodologies that could increase responsiveness of the nuclear weapons complex.”

Subcritical experiments. Through the Enhanced Capabilities for Subcritical Experiments program, NNSA is developing a major new X-ray imaging capability called Advanced Sources and Detectors that will enable research on the late stages of plutonium implosions. The House meets NNSA’s request to increase the program’s budget by almost 50% to $216 million, but notes it is “concerned with recent cost increases and the acquisition approach.” In its budget request, NNSA disclosed the total cost point estimate for the project has increased from $792 million to $1.06 billion, which is at the upper end of its expected cost range.

Explosive nuclear testing. Responding to reports the administration has considered ending the moratorium on nuclear testing, the House bill includes a provision that would prevent any prior or current year funds from being used to “conduct, or make specific preparations for, any explosive nuclear weapons test that produces any yield.” In its report, the House also notes it is aware that NNSA is “assessing the major science questions facing the Stockpile Stewardship Program over the next 20 years and is developing a plan to ensure continued confidence in the stockpile without nuclear explosive testing,” directing the agency to brief Congress on the status of the plan. Separately, the House’s version of this year’s National Defense Authorization Act also proposes to prohibit explosive testing.

University programs. Under the budget restructuring, NNSA would move programs that fund university-based research into a new Academic Programs account, including the High Energy Density Laboratory Plasmas program currently funded within Inertial Confinement Fusion. The House proposes to increase the budget for these programs by $15 million to $102 million, with $35 million specified for the Minority Serving Institution Partnership Program, a $10 million increase.

Materials science center. The House proposal includes up to $6 million for NNSA to establish a research center focused on “developing new additive and advanced manufacturing techniques, technologies, and methodologies to evaluate, diagnose, and control materials for production and manufacturing purposes.” It stipulates that the center be led by “a university with a school of engineering that has expertise in lifetime extension research and materials science.” 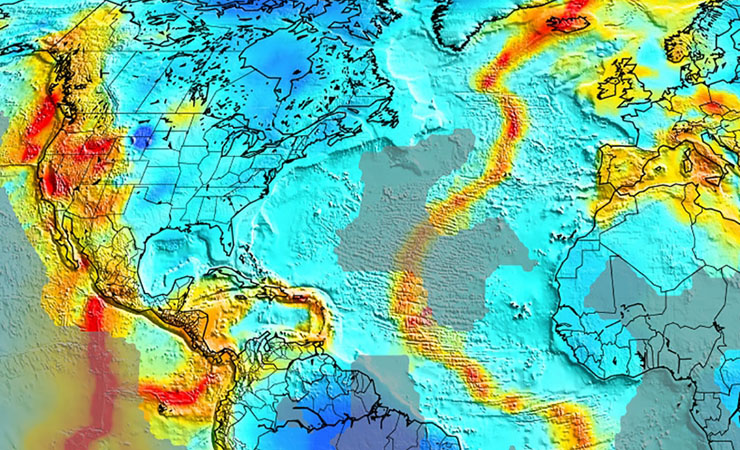 NNSA recently released an upgrade to software that simulates the propagation of seismic waves through the Earth’s crust and upper mantle, which can be used to locate nuclear detonations.

Nuclear forensics. The House endorses the administration’s proposal to create a new National Technical Nuclear Forensics R&D Program and seeks an associated strategic plan that includes cost estimates for establishing new forensics labs. It stipulates the plan must evaluate the merits and cost of creating a “low-background radiation laboratory capability with access to Category I special nuclear materials representative of both weapons and commercial uses to support activities such as accelerator-based photonuclear, neutron activation, chemistry and isotope separation, treaty verification, and technical capabilities enabling emergency response.” The plan would also be required to evaluate the benefits of creating an “analytical test laboratory that is co-located with criticality assembly irradiation capabilities allowing near-real-time measurements of early decay products.”

Nonproliferation workforce. The House meets NNSA’s request to ramp up funding for the recently established Nonproliferation Stewardship Program from $23 million to $60 million. The effort aims to help ensure NNSA has the foundational technical capabilities and workforce needed to address emerging threats, such as manufacturing technology advances that provide new means of illicitly producing nuclear weapons.

Low-enriched uranium fuel. The House proposes to increase the Nonproliferation Fuels Development program budget from $15 million to $20 million to support efforts underway to create a low-enriched alternative to the highly enriched uranium fuels currently used by nuclear-powered naval vessels. The administration requested no funds for the effort, maintaining that such fuel would be impractical and costly for the Navy to use.

Mo-99 production. Over the past decade, NNSA has supported private-sector efforts to develop a process for domestically producing the medical radioisotope molybdenum-99 that does not rely on highly enriched uranium. The House proposes to increase the budget of this effort from $35 million to $60 million to support a new competitively awarded funding opportunity for domestic suppliers.

Plutonium disposal. In 2018, NNSA pulled the plug on a long-delayed project to convert surplus weapons-grade plutonium into commercially usable nuclear fuel, and Congress provided it a final appropriation of $220 million last year for termination activities. NNSA is now ramping up work on an alternate strategy to dilute and dispose the plutonium at a waste site. The House supports this approach, proposing to nearly double its budget to $149 million as requested.