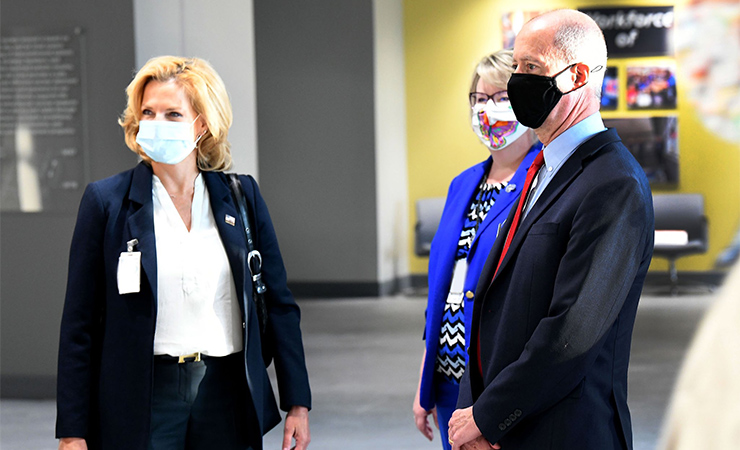 As Congress turns to its fall business, a conference committee is expected to convene soon to reconcile the versions of the annual National Defense Authorization Act (NDAA) that the House and Senate passed this summer.

Some of this year’s more contentious provisions involve nuclear security. One Senate proposal would give the Department of Defense more influence over the budget of the National Nuclear Security Administration, the quasi-autonomous agency within the Department of Energy responsible for maintaining the U.S. stockpile of nuclear warheads. The House, meanwhile, is proposing to block the Trump administration from advancing its idea of conducting an explosive nuclear test, which would break a moratorium the U.S. has observed since 1992.

This bulletin reviews provisions in the NDAA bills bearing on nuclear weapons as well as other military technologies. Throughout, numbers in brackets refer to corresponding bill sections and pages from the accompanying House and Senate Armed Services Committee reports. Prior bulletins covered provisions related to shoring up the U.S. “national security innovation base” and bolstering U.S. competitiveness in commercial technologies with military applications. Subsequent coverage will review provisions relating DOD laboratories, STEM workforce development, and the environmental resilience of DOD facilities, among other matters.

NNSA budget formulation. Early this year, it was widely reported that NNSA Administrator Lisa Gordon-Hagerty had pushed the White House to include billions of dollars more for her agency in the president’s budget request than Energy Secretary Dan Brouillette felt was appropriate. President Trump ultimately sided with her and the incident reportedly motivated Senate Armed Services Committee Chair Jim Inhofe (R-OK) to include a provision in the committee’s draft NDAA that would grant the DOD-dominated Nuclear Weapons Council authority to modify NNSA’s budget request. The proposal sparked bipartisan pushback in Congress and from Brouillette on the grounds it would diminish the traditional civilian control over the U.S. nuclear weapons complex. The final Senate bill was amended to allow the council to review NNSA’s budget submission to the White House and have its views included as an appendix. [Secs. 1652 and 3111]

Nuclear testing. The House proposes to prohibit any use of federal funding to “conduct or make preparations for any explosive nuclear weapons test that produces any yield.” [Sec. 3121] However, the Senate would allow NNSA to spend at least $10 million to “carry out projects relating to reducing the time required to execute a nuclear test if necessary.” [Sec. 3166] NNSA currently assures warhead viability through its Stockpile Stewardship Program, which employs simulations and non-explosive experiments conducted at national labs and testing facilities to understand how warhead integrity evolves with time.

Nuclear weapons effects. The House proposes to update a congressional apology to individuals suffering from the effects of past U.S. atmospheric nuclear weapons testing by specifying affected states and territories. [Sec. 3119] Another provision proposes that Congress adopt the view that the U.S. should “compensate and recognize all of the miners, workers, downwinders, and others suffering from the effects of uranium mining and nuclear testing carried out during the Cold War.” [Sec. 3120] A third provision would initiate a National Academies study of effects resulting from “likely and plausible scenarios for nuclear war.” [Sec. 3117]

Nuclear missile EMP resilience. The Senate would require the Air Force to produce a report on its plans to ensure the resilience of its next-generation nuclear missiles against electromagnetic pulse attacks. [Sec. 6651]

Plutonium pit production. NNSA is currently aiming by 2030 to annually produce at least 80 plutonium nuclear weapons cores, known as pits, to replace ones in the current U.S. nuclear stockpile. However, some assessments have questioned the immediate need for pit replacement as well as NNSA’s ability to meet its production goals through plans to build a new facility at its Savannah River Site. The House proposes that, if a new independent assessment cannot assign a 90% confidence level to NNSA’s cost and schedule objectives for the Savannah River facility, the agency would have to evaluate whether a five year schedule extension would present a “grave threat” to national security and consider the option of surging production at its existing facility at Los Alamos National Lab. [Sec. 3115] The Trump administration objects to obtaining a new independent cost estimate as such as estimates are already part of DOE’s ordinary project management procedures.

Long-term computing needs. The Senate proposes initiating a National Academies study of NNSA computing needs that will not be met through exascale computers in the next 20 years. The study would consider both classical and quantum computing architectures as well as both technical and personnel requirements. [Sec. 3156]

Stockpile Responsiveness Program. The House committee report encourages NNSA to redirect some of the Stockpile Responsiveness Program’s effort to “reducing cost, risk, and difficulty of manufacturing and producing nuclear weapons,” which it flags as the “overriding challenge of the nuclear enterprise.” [p. 309] Congress created the program through the fiscal year 2016 NDAA to cultivate and maintain a broader skillset among NNSA’s scientists and engineers than is generally exercised through the Stockpile Stewardship Program.

Discretionary manufacturing R&D. The House report directs the Government Accountability Office to review NNSA’s Plant-Directed and Laboratory-Directed R&D programs’ spending on technology and manufacturing projects to ensure they are being “efficiently funded.” [p. 306]

In compliance with the fiscal year 2017 NDAA, DOD created the new position of under secretary of defense for research and engineering in 2018 to focus its development of cutting-edge military technologies. Mike Griffin, the first person to hold the job, undertook aggressive initiatives across a range of technology areas, sometimes clashing with members of Congress and other DOD officials. Space technology proved a particular bone of contention, with Griffin championing a new entity called the Space Development Agency (SDA), even as the Trump administration moved to make a new service branch, the U.S. Space Force, DOD’s focal point for military space activities. While Griffin resigned in July, some proposals, particularly in the House bill, respond to tensions that arose during his tenure.

Missile Defense Agency. The House would require DOD to explore the prospect of transferring oversight of its Missile Defense Agency (MDA) from the under secretary for research and engineering to the under secretary for acquisition and sustainment. The provision cites DOD’s declining funding requests for advanced technology development at MDA as justification, but lawmakers reportedly included it out of broader frustrations with Griffin’s leadership over missile defense. [Sec. 1655]

Space Development Agency. Noting that SDA has had a “rocky” start, the House report expresses concern the agency is not equipped to pursue its various priorities and has not set out an adequate multiyear budget. Therefore, the agency is encouraged to “focus on top priorities,” including a low Earth orbit missile warning system and an expansive satellite network for providing data and connectivity to terrestrial military forces. [p. 239] The Senate bill would reaffirm current plans to transfer SDA to the Space Force no later than the end of fiscal year 2022. [Sec. 1606]

Space-based tracking sensors. While SDA is responsible for developing a new low Earth orbit missile warning system, MDA has responsibility for developing a sensor for use in that system that can detect both hypersonic weapons and ballistic missiles. Although the Trump administration has proposed transferring the sensor project to SDA, the House bill would direct the work to continue under MDA. The Senate bill would likewise keep the project with MDA, while directing DOD to weigh in on whether it should be transferred to the Space Force after fiscal year 2022. Both bills would require DOD to report annually to Congress on the project’s budgetary requirements, reflecting their interest in fully funding it. [House Secs. 1653 and 1654; Senate Sec. 1662]

Directed energy. The House bill would direct DOD to establish a Directed Energy Working Group to coordinate efforts in the area across the department and the military service branches. [Sec. 225] The House report also expresses a specific concern over DOD’s decision to remove development of a diode pumped alkali laser from MDA’s portfolio. The project, based at Lawrence Livermore National Lab, had been supported as a possible route to developing an airborne weapon capable of destroying intercontinental ballistic missiles during the boost phase of their trajectory. However, Griffin explained earlier this year he had become “extremely skeptical” about such weapons’ prospects. The report directs DOD to further explain its plans for boost-phase missile defense, including for systems that employ directed energy weapons. [p. 241]

Hypersonic testing. The Senate proposes requiring DOD to explore the “potential refurbishment of existing operating and mothballed federal research and testing facilities to support hypersonics activities.” [Sec. 240] The provision was introduced as an amendment by Sens. Sherrod Brown (D-OH) and Rob Portman (R-OH), who framed it as a potential path for resuscitating work at NASA’s Plum Brook Station in Sandusky, Ohio.