The House is seeking to significantly expand weather and climate research programs at the National Oceanic and Atmospheric Administration for fiscal year 2021, while the Senate has not released its proposals.

The House passed legislation this summer that would increase the National Oceanic and Atmospheric Administration’s overall budget by 2% to $5.45 billion, rejecting the Trump administration’s proposed 14% cut. Among its priorities for the agency, the House seeks to significantly expand weather and climate research programs managed by the Office of Oceanic and Atmospheric Research.

The Senate has not released its own proposals for the agency, but it is unlikely to support the administration’s request, as in recent years it has proposed at least level funding for most NOAA offices 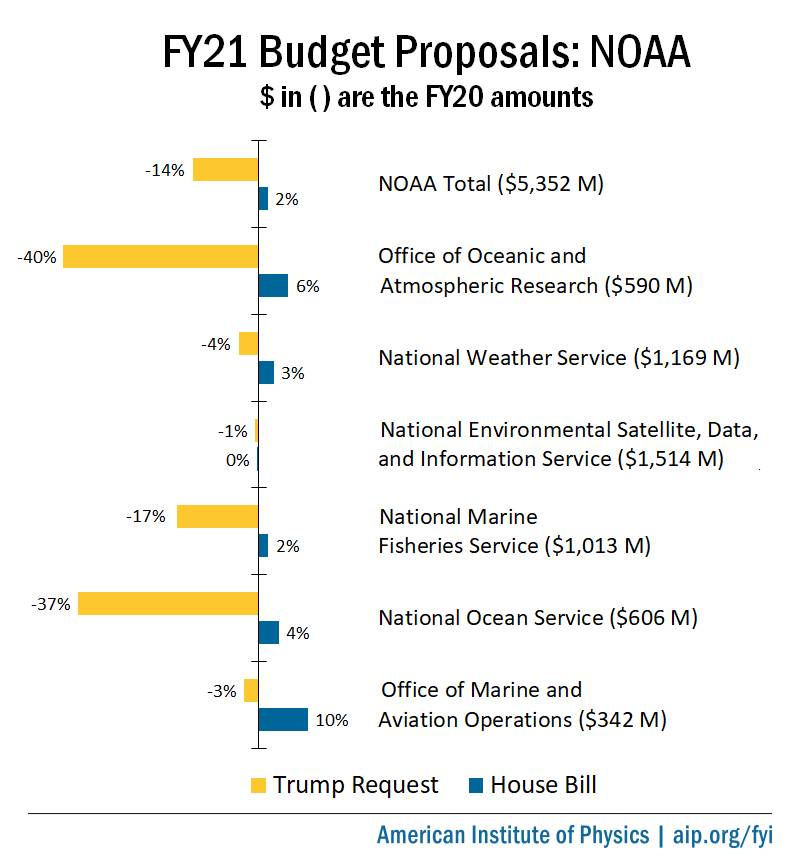 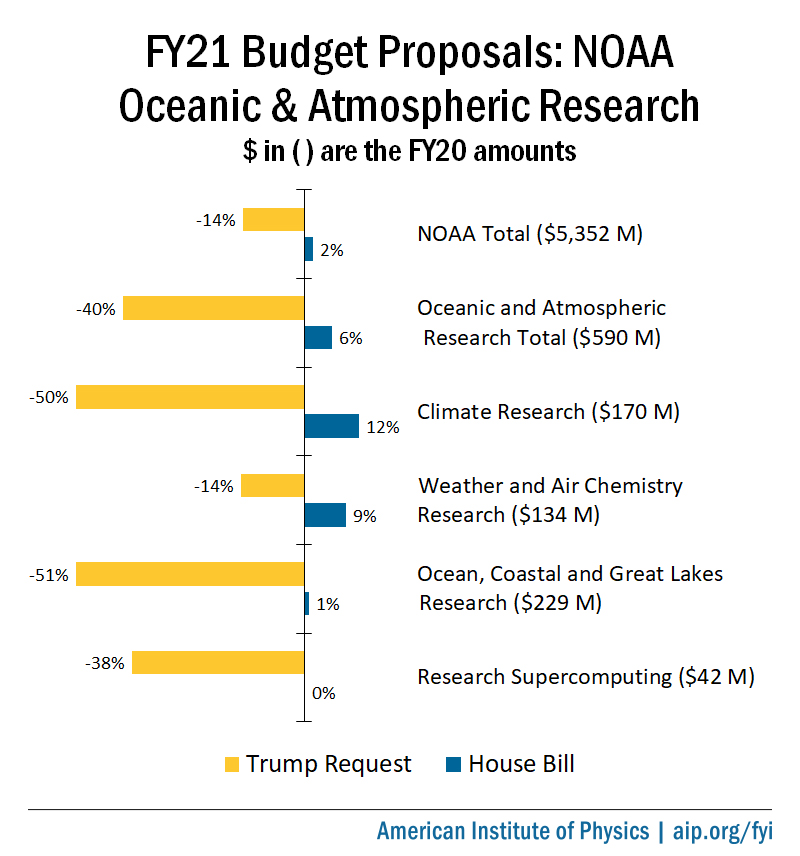 NOAA’s Office of Oceanic and Atmospheric Research funds a broad portfolio of in-house and extramural research on weather and climate modeling, coastal resilience, and ocean exploration, among other areas. While the administration proposed to cut the office’s budget by 40% overall and sharply pare back its extramural research programs, the House instead seeks to expand it by 6% to $626 million.

Climate research. Funding for climate research across NOAA’s labs, cooperative institutes, and competitive grant programs would increase 12% to $190 million under the House proposal. The House specifically rejects the administration’s request to defund the Climate Competitive Research grant program, instead increasing its budget by 10% to $69 million. It also rebukes the administration for proposing to eliminate dedicated funding for NOAA’s contribution to the National Climate Assessment and instructs NOAA to allocate at least level funding for the assessment.

Addressing NOAA’s role in climate data collection, the House would direct it to spend at least $1.25 million to modernize the Global Monitoring Laboratory and Atmospheric Baseline Observatories, which it states have provided critical longitudinal measurements of atmospheric carbon dioxide that are the basis of the Keeling Curve. It would also direct NOAA to identify an “authoritative set of climate information that emphasizes forward-looking climate data and projections” on behalf of the National Institute of Standards and Technology. Last year’s appropriations legislation instructed NIST to use such information to help develop building standards that account for “increasingly extreme weather events and other climate change challenges”

Geoengineering. The House proposes allocating at least $9 million to “modeling, assessments, observations, and monitoring of stratospheric conditions and the Earth's radiation budget,” a $5 million increase over the amount specified for fiscal year 2020. Its report also states NOAA should work to “improve the understanding of the impact of atmospheric aerosols on radiative forcing as well as on the formation of clouds, precipitation, and extreme weather.” Such research could inform any deliberations over the potential use of stratospheric aerosol modification as a form of geoengineering. The National Academies is currently developing a research agenda and governance approaches for solar geoengineering that it expects to complete by the end of the year.

Earth Prediction Innovation Center. EPIC is a mechanism NOAA is standing up to crowdsource improvements to its weather forecast models. The House would provide $3.5 million above the fiscal year 2020 level for EPIC, short of NOAA’s request for a $7 million increase. It also directs the agency to “include workforce, organizational, and culture change components as part of the EPIC scope and to include the adoption of more modern software engineering practices and the application of new practices in research and operations processes that infuse innovation.”

Severe weather. The House proposes meeting the $3.2 million requested to create the Tornado Warning Improvement and Extension Program, an effort mandated by Congress with the aim of pushing tornado prediction lead times beyond one hour. It also encourages NOAA to establish a severe weather extramural testbed that would focus on improving convection models and using new techniques for data assimilation and ensemble prediction.

Weather enterprise decadal survey. Within the budget for the National Weather Service, the House proposes $1.5 million for an “inaugural decadal survey of the U.S. weather enterprise” to be conducted by the National Academies. The study is to assess how the enterprise has performed over the previous five years, review implementation of the Weather Research and Forecasting Innovation Act of 2017, and evaluate “future potential federal investments in science, satellites, radars, and other observation technologies, to include surface and boundary layer observations.” 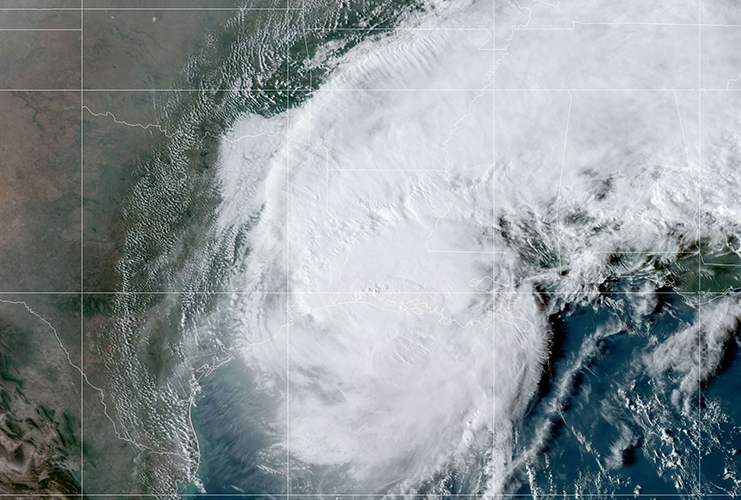 Hurricane Delta, imaged by the GOES-East satellite on Oct. 9.

The House also supports NOAA continuing to expand its use of commercial data in weather forecasts, albeit at a slower pace than requested. It proposes $2.7 million above the fiscal year 2020 level for “purchase and piloting” of such data. Last year, Congress provided $3 million for NOAA’s Commercial Weather Data Pilot program and $5 million to initiate purchases of commercial radio occultation data, and NOAA is seeking to increase those amounts to $8 million and $15 million respectively for fiscal year 2021.

As in previous years, the House rejects the administration’s proposal to move the Office of Space Commerce out of NESDIS and notes it “looks forward” to the completion of a study on the topic by the National Academy of Public Administration. The study, which was completed late this past summer, endorses the move and calls on Congress to pass corresponding authorization legislation.

Office of Education. The House rejects the administration’s proposal to eliminate all major programs in NOAA’s Office of Education, and would instead increase its budget by 11% to $34 million. Of the total, $20 million would go to the Jose E. Serrano Educational Partnership Program with Minority-Serving Institutions, a $3 million increase.

Sexual harassment. The House report expresses strong concern over the threat of sexual harassment and assault in nontraditional workplaces operated by NOAA, such as research vessels and private fishing vessels, while recognizing initial steps the agency has taken to address the issue. The House would direct NOAA to spend at least $1.7 million above the fiscal year 2020 level to support this work and to “expedite the hiring of staff to reduce these risks and to provide assistance and counseling to victims.”