The president’s latest budget request for the National Oceanic and Atmospheric Administration largely repeats past cuts, including a near halving of the agency’s main research office, while again prioritizing weather research over climate and ocean programs.

The Trump administration’s latest budget request for the National Oceanic and Atmospheric Administration calls for a 14% cut to the agency’s $5.35 billion topline. The cuts are distributed across all of NOAA’s major offices, though the steepest would fall on the Office of Oceanic and Atmospheric Research and the National Ocean Service, which would both see their budgets reduced by about 40%.

Meanwhile, the National Weather Service would receive a comparatively modest 4% overall cut, and the National Environmental Satellite, Data, and Information Service budget would remain about flat. 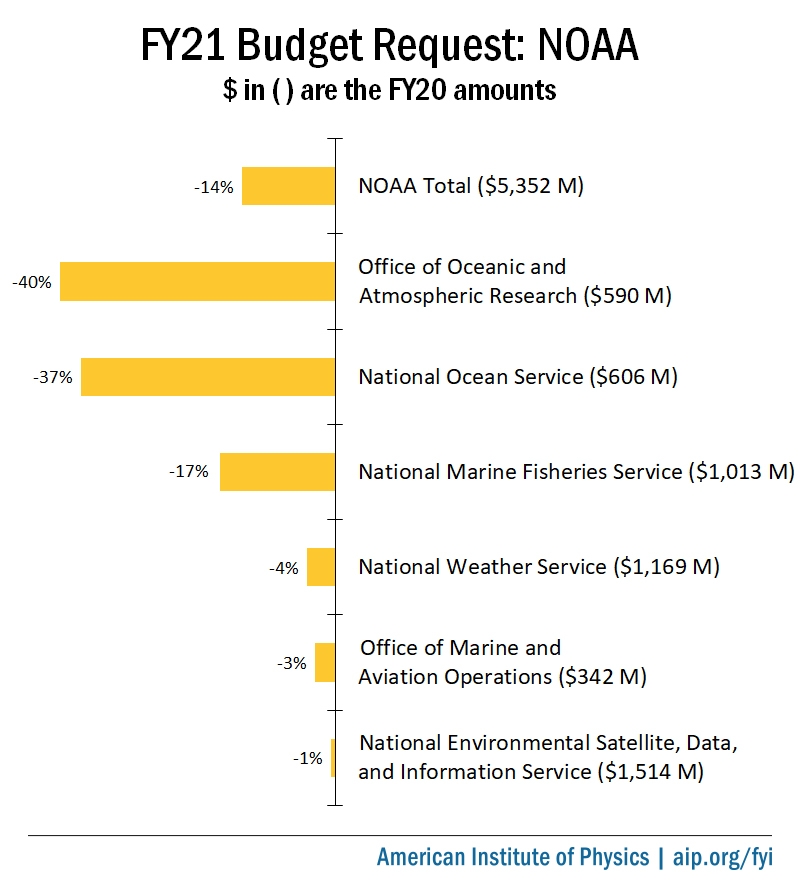 Congress has rejected the administration’s previous proposals to sharply pare back NOAA’s research and forecasting programs, though it has decreased the agency’s overall budget the past two years, largely due to declining funding needs for satellite acquisition activities. For summary figures from the request and details regarding previous appropriations cycles, see FYI’s Federal Science Budget Tracker.

Office of Oceanic and Atmospheric Research

Echoing its last two budget requests, the administration proposes to cut the Office of Oceanic and Atmospheric Research by 40% to $353 million. Within the reduced topline, NOAA would prioritize weather research over climate and oceans research. 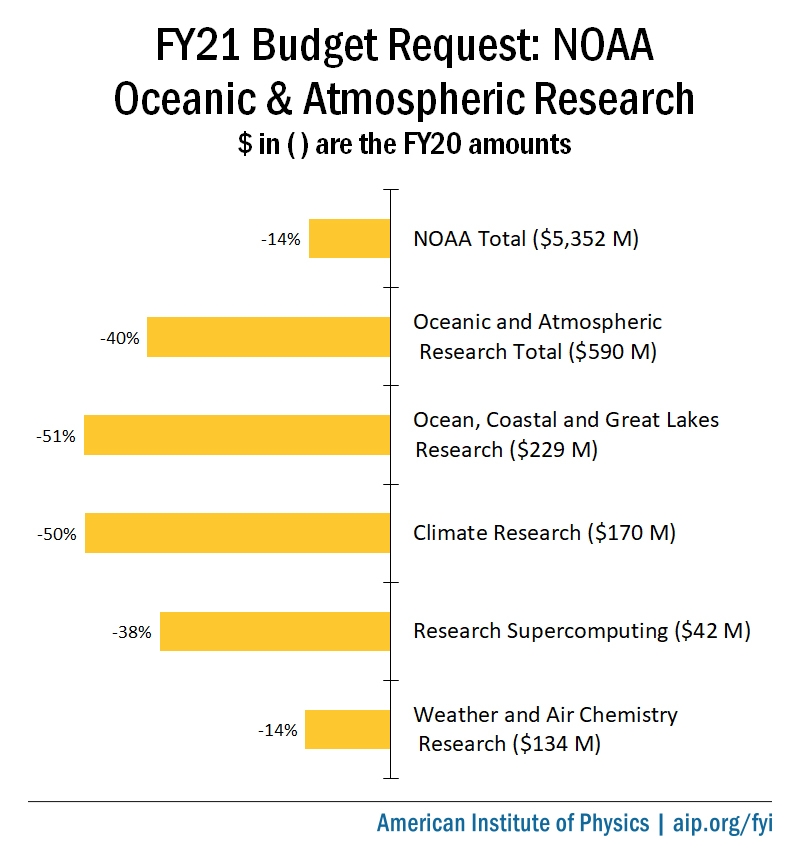 Climate Research. The administration proposes to halve the Climate Research division budget to $84 million, with much of the decrease resulting from termination of the Climate Competitive Research program, which issues grants to NOAA research laboratories and external institutions. NOAA would consolidate some of the budget for the program within other accounts, in part by transferring $6 million for seasonal to subseasonal forecasting research to the U.S. Weather Research Program.

The administration also proposes to terminate climate research activities at the Atlantic Oceanographic and Meteorological Laboratory in Florida and shutter the Regional Integrated Sciences and Assessment program, which develops decision-support tools for disaster preparedness and city planning. And just as the next National Climate Assessment process is spinning up, NOAA would also end its “dedicated funding” for the interagency effort, proposing to instead use resources from other programs to support its leadership of the assessment. NOAA would focus the remaining Climate Research funds on core activities of its laboratories, cooperative institutes, and the National Integrated Drought Information System.

Weather and Air Chemistry Research. The budget for the Weather and Air Chemistry Research division would drop 14% to $115 million under the request. Within the tighter topline, NOAA proposes to channel funding to the Earth Prediction Innovation Center (EPIC), a cornerstone of the agency’s effort to reclaim global leadership in weather forecasting. Congress directed NOAA to allocate at least $8 million to EPIC for fiscal year 2020, and the agency now requests a $7 million increase.

NOAA plans to use EPIC to crowdsource improvements to its weather forecast models by empowering external scientists to contribute code updates. It states the budget increase for EPIC will help it build out a cloud-based code development environment and improving the Unified Forecast System, a community modeling framework that aims to simplify the agency’s suite of environmental models. NOAA is expected to solicit bids in the near future for a contract to operate the center.

NOAA also requests $3 million to establish a Tornado Warning Improvement and Extension Program, as called for in the Weather Research and Forecasting Innovation Act of 2017. Congress directed that the goal of the program should be to “reduce the loss of life and economic losses from tornadoes through the development and extension of accurate, effective, and timely tornado forecasts, predictions, and warnings, including the prediction of tornadoes beyond one hour in advance.”

To accommodate these new efforts, other programs would see steep cuts. The Joint Technology Transfer Initiative, which focuses on translating research advances into operational weather models, would see its budget drop from $15 million to $3 million. NOAA would also close its Air Resources Laboratory in Maryland, which conducts atmospheric chemistry research, and terminate the Vortex-Southeast project, which seeks to improve tornado forecasts across the southeastern United States. 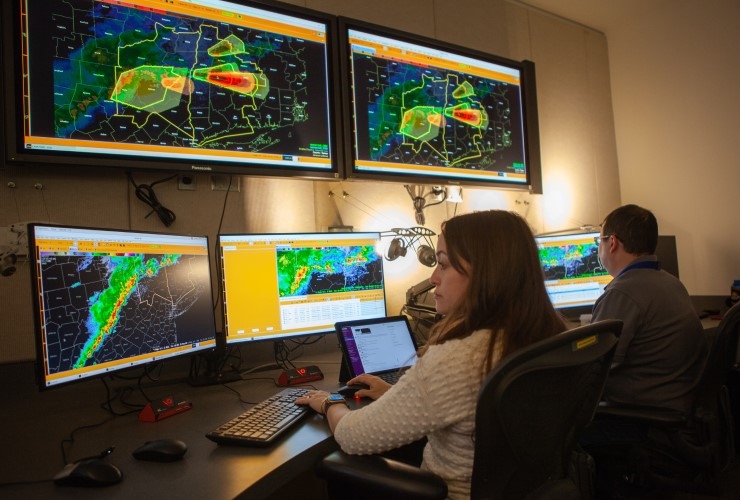 Ocean, Coastal, and Great Lakes Research. The administration proposes to cut the Ocean, Coastal, and Great Lakes Research division budget by 51% to $113 million. Much of the drop would stem from terminating the $74 million National Sea Grant College Program, which supports research related to resiliency in coastal communities. The remainder of the cuts are distributed across ocean exploration and observation programs, reducing the number of data collection platforms NOAA could maintain. NOAA also proposes to “realign” its ocean exploration program to support a presidential directive on mapping the area within the U.S. Exclusive Economic Zone and the shoreline of Alaska.

High Performance Computing. Funding for the acquisition of supercomputing systems would decrease from $42 million to $26 million, with the administration again proposing to terminate a $15 million “congressionally directed” high performance computing project at Mississippi State University.

Despite the proposed cut, the budget request highlights how demand for high performance computing resources “outweighs the current supply of NOAA’s capabilities by 32 times.” It adds, “NOAA is exploring ways of mitigating this shortfall through other means such as cloud computing. NOAA currently has several pilots examining if the cloud could be a possible solution to fill the supply and demand gap.” NOAA published a draft strategy for cloud computing late last year.

NOAA is currently in the process of replacing its constellation of satellites that feed data into forecast models for terrestrial and space weather. For fiscal year 2021, NOAA requests funds to sustain acquisition programs for next-generation geostationary and polar-orbiting satellites as well as significantly ramp up funding for new space weather observation systems. It also proposes to continue restructuring the budget for satellite programs in response to a recent satellite architecture study.

Budget restructure. NOAA emphasizes it is seeking to implement a “new paradigm” for its satellite programs wherein the agency will increasingly acquire data from federal partners and commercial entities to complement data from platforms it operates directly. As part of its preparation for this more disaggregated architecture, NOAA proposes to create a new program that will “manage future geostationary and space weather observations as a portfolio.”

Geostationary satellites. NOAA has launched two of the four satellites in its state-of-the-art Geostationary Operational Environmental Satellite (GOES) – R series. NOAA was originally scheduled to launch the third satellite this year, but the agency pushed back the target date after a key sensor on the previous satellite in the series encountered problems after its launch. The budget request states NOAA is now targeting a December 2021 launch date. The agency also proposes to increase the program’s budget by 10% to $335 million in part to support the replacement of ground control system servers to comply with a 2014 law that restricts the agency from purchasing certain products that are produced in China. 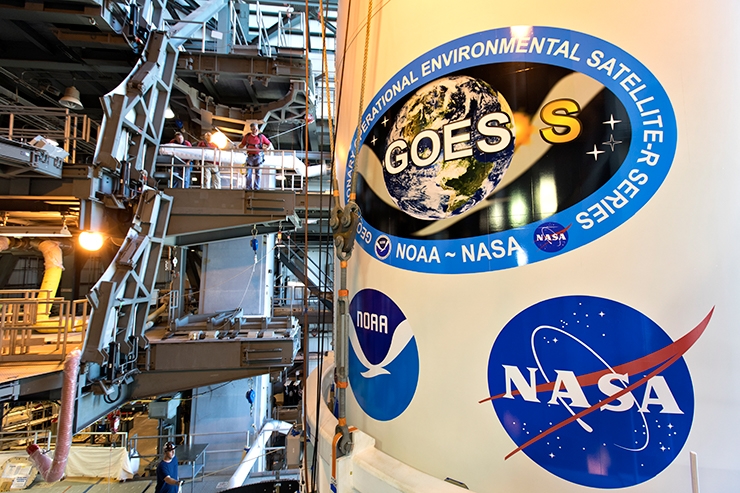 The payload fairing for the GOES-S (GOES 17) satellite, which launched in 2018 and became operational in 2019. NOAA is currently preparing two additional geostationary weather satellites for launch in the first half of the decade.

Space weather monitoring. Funding for the Space Weather Follow On would increase by $44 million to $108 million. The satellite will monitor the Sun’s coronal mass ejections and solar winds, replacing capabilities currently provided by the aging Solar and Heliospheric Observatory spacecraft. NOAA states the increased budget would permit the satellite’s development to progress fast enough for it to share a launch vehicle with NASA’s Interstellar Mapping and Acceleration Probe in 2024.

Commercial weather data. NOAA is continuing to assess the feasibility of ingesting commercial data into its weather forecasts and requests $8 million to continue its Commercial Weather Data Pilot program, a $5 million increase over the current level. It also requests $15 million for the acquisition of radio occultation data through its Commercial Data Purchase program, a $10 million increase over the current level, aiming to issue its first contract in fiscal year 2021. The budget request notes, “The amount of [radio occultation] data purchases will depend on the price, quality, and availability of data from commercial providers. These factors will also impact how quickly future data purchases will occur.”

Office of Education. Echoing prior requests, the administration proposes to eliminate all major programs in NOAA’s Office of Education, including programs that support STEM education at minority serving institutions, environmental literacy, and undergraduate scholarships. The request retains $1 million of the office’s current $30 million budget for NOAA to support a “streamlined, centralized office” focused on “coordinating and improving the performance of NOAA’s numerous activities in STEM education.”

Sexual harassment and assault. NOAA requests funding to expand its Workplace Violence Prevention and Response Program. At a recent congressional hearing, Acting NOAA Administrator Neil Jacobs testified that the program is “working to set up agency-wide prevention services and to establish victim advocacy for the agency,” and that NOAA will be the first civilian federal agency to employ embedded victim advocates. Congress has focused significant attention on preventing sexual harassment and violence at NOAA, in part due to the particular threats faced by fisheries observers who spend extended periods of time on private vessels.