The House continues to reject the Trump administration’s calls for steep budget cuts to the U.S. Geological Survey, while partially accepting its proposal to restructure the agency’s mission areas. 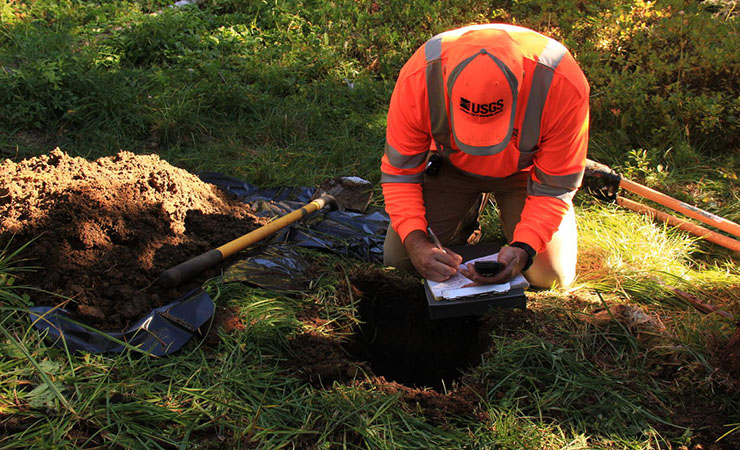 A geophysicist from the USGS Cascades Volcano Observatory notes the location of a newly buried seismometer on Mount Rainier in Washington. The observatory was established after the eruption of Mount St. Helens in 1980.

In the face of the Trump administration’s proposed 24% budget cut to the U.S. Geological Survey, the House passed legislation this summer that would instead increase the agency’s budget 2% to $1.29 billion for fiscal year 2021. However, the bill does partially accept the administration’s proposed reorganization of the agency’s science mission areas, after having rejected it last year. The Senate has not released its proposal for the agency, though last year it rejected similar cuts while endorsing the reorganization.

The Appropriations Committee report accompanying the bill explains the House’s stance on the reorganization and provides additional details on its priorities. For program-level figures, consult the FYI Federal Science Budget Tracker.

Agency reorganization. The USGS research budget is organized around seven accounts reflecting the agency’s main mission areas: Natural Hazards, Energy and Minerals, Land Resources, Environmental Health, Ecosystems, Water Resources, and Core Science Systems. For the last two fiscal years, the administration has proposed to adjust the budget structure of some of these mission areas and to consolidate their number from seven to five. It maintains the restructuring would “ensure that programs of related focus and practice are managed within the same mission area,” and that the reduced number of mission areas “aligns with government-wide goals to improve efficiency.”

As part of the reorganization, the climate change portfolio within Land Resources would be subsumed within Ecosystems, while its land-imaging portfolio would be moved to Core Science Systems. Environmental Health would also be subsumed within Ecosystems. The House accepts this consolidation while retaining certain budget lines to “provide more detail and ensure program and funding transparency.” It does not adopt a proposal to merge accounts within the Water Resources mission area, directing USGS to include more details in its next budget request on where major programs would be housed.

The Natural Hazards and Energy and Minerals mission areas would be unaffected by the proposed reorganization.

Climate science. The House would provide $41 million to the National and Regional Climate Adaptation Science Centers, a $3 million increase and $32 million more than requested, arguing the proposed cut is “shortsighted and counterproductive at a time when our natural and cultural resources, our communities, and our health are being assaulted by climate change.” The House directs that at least $4 million of the total should go toward creating a new center in the Midwest that is selected through a competitive process. It also expresses concerns about “unnecessary delays” in the distribution of funding to the centers and approval of their staffing plan, directing the agency to fill all staff vacancies and allocate funds more quickly.

Natural hazards. Through its Natural Hazards mission area, USGS funds various research, monitoring, and preparedness activities. The House proposes to increase its budget by 2% to $174 million, rejecting the 19% cut proposed by the administration. The additional funding would be distributed across earthquake, volcano, landslide, coastal, and geomagnetic hazards programs.

The House report includes extensive direction for earthquake monitoring programs, specifying budgets for continued buildout of an earthquake early warning system for the West Coast, upgrades to seismic hazard models, and operation of the EarthScope seismic monitoring stations acquired from the National Science Foundation in 2018. It also repeats language from previous years expressing concern about the “lack of knowledge and offshore real-time instrumentation” on the Cascadia subduction zone in the Pacific Northwest. It urges continued development of an earthquake warning system for the region and recommends expanding the reach of the system into locations that will “benefit from early detection and characterization of earthquakes and tsunamis, to include the Caribbean Basin.”

Mineral resources. The House matches the administration’s request to increase funding for the Energy and Mineral Resources mission area by 1% to $91 million. Of this amount, the House would provide level funding of $11 million as requested for the Earth Mapping Resources Initiative (Earth MRI), which is surveying regions of the U.S. thought to harbor large deposits of critical minerals.

Mapping. The House proposes increasing the National Cooperative Geologic Mapping program’s budget by 18% to $41 million to “accelerate new mapping and sustain Phase Three of the National Geologic Map Database.” It states the effort is “bringing together detailed national and continental resolution 2D and 3D information” that underpins a range of projects, including the Earth MRI initiative.

The House also proposes a marginal increase to $80 million for the National Geospatial Program and directs that at least $46 million go to the 3D Elevation Program, which is collecting lidar-generated high-resolution elevation data across the U.S. It instructs USGS to “complete 100% coverage of the Great Lakes region, begin expanding coverage to the southeastern United States region, and to include a detailed cost estimate for achieving 100% coverage of that region in the fiscal year 2022 budget justification,” with a goal of achieving national coverage by 2026. It also instructs the agency to continue developing digital surface models using unclassified satellite optical data for regions not mapped with lidar in collaboration with the National Geospatial-Intelligence Agency, NASA, and the National Science Foundation.

Biosafety labs. Citing the COVID-19 pandemic as demonstrating the “need for continued research on zoonotic diseases in safe and secure facilities,” the House proposes spending $59 million to “renovate and support Biosafety level 2 and 3 Diagnostic Laboratories at the National Wildlife Health Center and ensure the facility has the capability to safely investigate outbreaks of wildlife disease.”