Although the Trump administration is requesting a $2.6 billion increase in NASA’s budget for fiscal year 2021, it is seeking a 12% cut for its Science Mission Directorate and placing the Wide Field Infrared Survey Telescope and Stratospheric Observatory for Infrared Astronomy on the chopping block.

The Trump administration is seeking a 12%, $2.6 billion increase for NASA in its budget request for fiscal year 2021, primarily to support the Artemis lunar exploration program. However, the extra funds would not fully meet Artemis’ rapidly growing requirements; additional resources would be drawn away from the Science Mission Directorate, which would see its budget decline 12% to $6.3 billion. 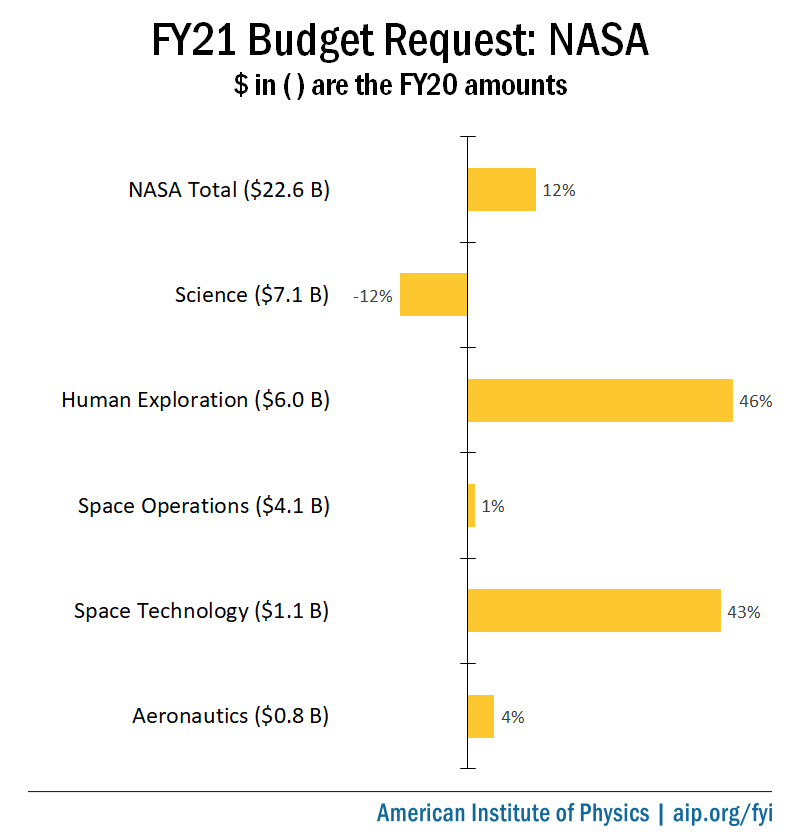 Within the science directorate, the administration is for the third time proposing to cancel the flagship Wide Field Infrared Survey Telescope (WFIRST). Joining it on the chopping block for the first time is the airborne Stratospheric Observatory for Infrared Astronomy (SOFIA), a currently operating mission. The administration is also repeating prior proposals to shave about $200 million from the nearly $2 billion budget of the Earth Science Division.

Rejecting similar cuts over the past three budget cycles, Congress has instead increased NASA’s science budget by 24% since fiscal year 2017, and it is likely to resist any major funding cuts again this year. Nonetheless, if Congress strongly supports Artemis, the limitations imposed by next year’s federal spending caps could put science funding under pressure. For summary figures from NASA’s request and previous appropriations cycles, see FYI’s Federal Science Budget Tracker. 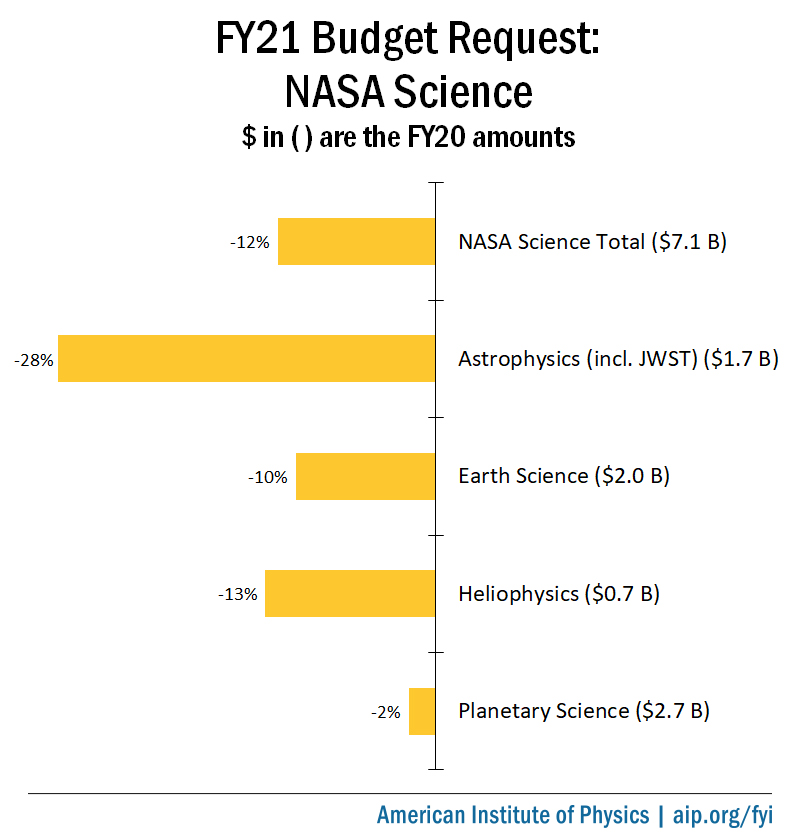 In its budget request, NASA projects for the first time the full cost of its program to achieve a crewed lunar landing by 2024. Most of the additional costs would be concentrated in NASA’s Exploration Research and Development account, which is currently funded at $1.44 billion. The agency is requesting an increase to $4.72 billion for fiscal year 2021 and anticipates the account would crest at $7.53 billion in fiscal year 2023. Whether Congress will entertain such funding increases is by far the most uncertain and consequential question NASA faces heading into this year’s appropriations season.

NASA is requesting $2.66 billion for its Planetary Science Division, a 2% cut. The proposed level is 3% below the peak the division reached in fiscal year 2019 following a five year period in which its budget doubled.

Lunar science missions. NASA proposes to ramp up funding for lunar science from about $300 million to $452 million, including $68 million for the Volatiles Investigating Polar Exploration Rover (VIPER) and $254 million for contracting commercial lunar landing services. The first two commercial lander missions are scheduled for launch next year, with a third anticipated in 2022, each carrying a variety of science and technology payloads. NASA recently decided to push back VIPER from 2022 to 2023 to accommodate design upgrades.

Europa Clipper. NASA is requesting $404 million for its flagship Europa Clipper mission, which is $127 million less than it anticipated needing a year ago and $189 million less than the mission’s current budget. The reduction reflects Congress’ decision to push back the mission’s required launch date from 2023 to 2025, enabling NASA to decompress its development schedule to target a 2024 launch. Although Congress is still insisting the mission use the Space Launch System heavy-lift rocket NASA is developing, the agency is again proposing to use a commercial rocket instead, stating it would save $1.5 billion.

Europa Lander. No funds are requested for a follow-on Europa Lander mission on the grounds that the mission was “not supported by the science community,” as conveyed through the midterm report for the most recent National Academies planetary science decadal survey. Congress expressed support for the mission in its latest appropriation but provided no new funding for it, stating that funds remaining from its fiscal year 2019 appropriation were sufficient for early work on the project to continue. 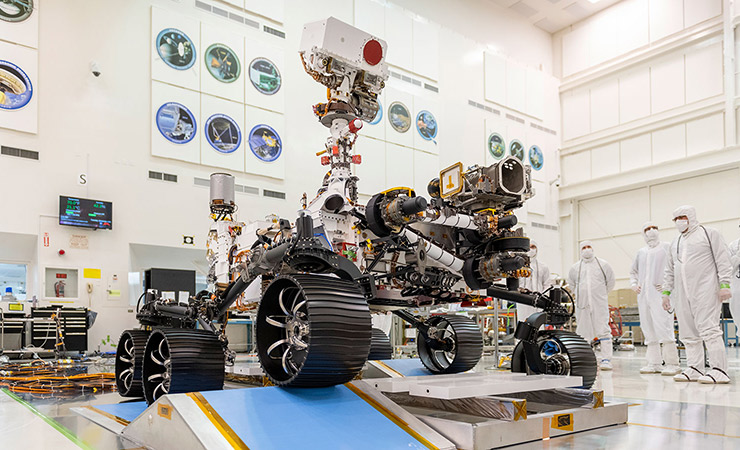 Mars 2020. With the flagship Mars 2020 rover expected to launch this summer and arrive at Mars next February, its funding needs will be cut in half, from $319 million to $162 million. The rover’s schedule was unaffected by problems experienced with two of its instruments and its sample caching system, though the difficulties ultimately drove the mission’s development cost up to $359 million above its baseline, a 21% breach. NASA is required to notify Congress if costs exceed the baseline by 15% and the budget request indicates the agency did so in December.

Future Mars missions. NASA is requesting $233 million in its Mars budget for “future missions,” more than twice what it sought last year. Much of the funding would go toward early planning for a mission to retrieve samples cached by the Mars 2020 rover. NASA indicates it could approve the start of the mission’s formulation phase as early as this summer with an eye toward launching in 2026.

The future missions budget would also support exploratory work on an orbiter called the Mars Ice Mapper, a potential collaborative project with Canada that would map and profile water ice deposited just beneath the planet’s surface.

New Frontiers missions. NASA’s New Frontiers program supports medium-scale missions that cost less than $850 million to develop. The agency is seeking $96 million for early work on Dragonfly, a rotorcraft mission to Saturn’s moon Titan that was selected through the program last year with a launch targeted for 2026. Among the three New Frontiers missions currently operating, Juno and New Horizons will receive steady funding, while OSIRIS-REx’s budget requirements will be cut almost in half to $29 million, reflecting the anticipated completion this year of its sample collection campaign at the asteroid Bennu.

Discovery missions. NASA’s Discovery program supports small-scale missions that cost less than $500 million to develop. Within the program budget, combined funding for the Lucy and Psyche asteroid missions is declining from $430 million to $341 million as they approach their launches, which are respectively scheduled for 2021 and 2022. NASA is planning to select up to two additional Discovery missions next year from four finalists it announced this month: the DAVINCI+ and VERITAS missions to Venus, the Io Volcano Observer mission to Jupiter’s innermost moon, and the TRIDENT flyby mission to Neptune’s icy moon Triton.

Planetary defense. NASA requests level funding of $150 million for planetary defense activities, including $66 million for the Double Asteroid Redirection Test, which is expected to launch in 2022. Although Congress provided $36 million this year for work on the recently announced Near-Earth Object Surveyor, a space-based infrared telescope, the agency has not requested a commensurate increase within its fiscal year 2021 budget for near-Earth object observations. The request notes only that its proposed budget would support an infrared instrument development project leading toward the mission. NASA has anticipated the mission would cost between $500 million and $600 million and could launch as early as fiscal year 2025.

Combined funding for the Astrophysics Division and the separate James Webb Space Telescope account would decline 28% under the budget request to $1.25 billion.

Wide Field Infrared Survey Telescope. Most of the cut for Astrophysics stems from the proposal to cancel WFIRST, which is funded at $511 million this year. NASA’s request does not state what the project’s budget requirements would be if it were not discontinued, but Division Director Paul Hertz has suggested in public presentations that they would remain about the same for fiscal year 2021. The project is currently expected to cost between $3.2 billion and $3.9 billion to develop, with a launch date in the mid-2020s. However, a firmer baseline cost and schedule will be established following the imminent completion of WFIRST’s confirmation review.

SOFIA. In proposing to terminate SOFIA, an infrared telescope mounted within a 747 airplane, NASA notes its annual operating cost of more than $80 million is second only to the Hubble Space Telescope’s, adding that “the scientific productivity of the mission is not on par with other large science missions.” NASA is requesting $12 million to place the aircraft in storage and dispose of the project’s inventory. However, SOFIA has strong support in Congress, which previously prohibited NASA from including it in the agency’s 2019 senior review of Astrophysics missions, thereby shielding it from any ensuing termination recommendation.

James Webb Space Telescope. NASA is requesting $415 million for JWST, a slight decrease from its current level. Although the mission depleted much of its schedule reserve last year during spacecraft testing, those activities have proceeded more smoothly since then and the mission remains targeted for launch in March 2021. Beginning in fiscal year 2022, its annual funding needs are expected to fall to about $175 million as it begins science operations.

The Earth Science Division budget would fall 10% to $1.77 billion under the request, largely repeating proposals made the past three years.

PACE and CLARREO Pathfinder. Once again, the administration proposes to cancel the $890 million Plankton, Aerosol, Cloud, ocean Ecosystem (PACE) satellite as well as CLARREO Pathfinder, a $100 million instrument for measuring solar radiation reflected from the Earth that is to be installed on the International Space Station. Congress has consistently fully funded both projects. 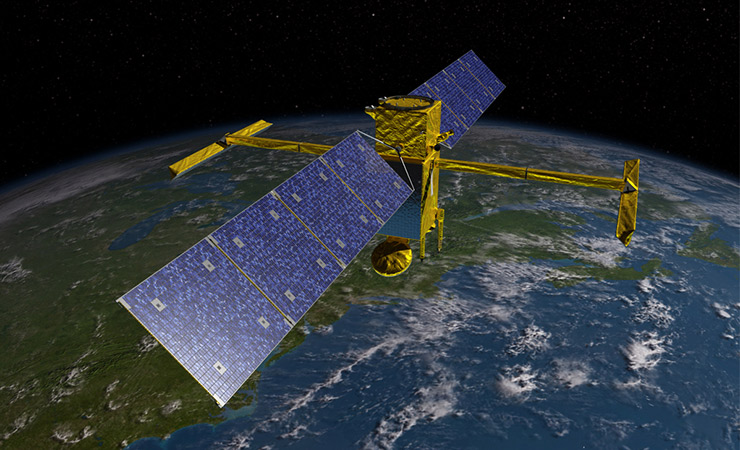 An artist’s impression of the SWOT satellite, which will make high-resolution elevation measurements of the ocean’s surface.

Spacecraft approaching launch. The funding requirements for several major spacecraft development projects are decreasing as they approach their anticipated launch dates. These include:

Decadal survey projects. With missions in the development pipeline now approaching launch, the division is turning its attention increasingly to implementing the recommendations of the 2017 Earth science decadal survey. NASA requested $20 million for projects responding to the survey last year and is requesting $38 million this year. Next year, it anticipates requesting $153 million and then $247 million for fiscal year 2023. The agency has just selected its first project stemming from the survey, a solar radiation-measuring instrument called Libera that is to be included aboard the JPSS-3 weather satellite.

The budget for the Heliophysics Division would decline 13% to $633 million under the request.

Interstellar Mapping and Acceleration Probe. NASA is requesting $73 million for IMAP, a decrease of about $50 million relative to last year’s request that the agency states will be “without impact.” It explains, “To take advantage of the novel rideshare opportunity that IMAP is offering, NASA plans to purchase the IMAP launch vehicle in the summer of 2020. This purchase will use fiscal year 2019 funds, thus reducing the requirements for fiscal year 2021 funds.” NASA anticipates that next year it will request $186 million for the mission, which will study the boundary of the Sun’s heliosphere from the L1 Lagrange point between the Earth and the Sun.

Geospace Dynamics Constellation. Within the division’s “Living with a Star” program, NASA is requesting funding for early work on a mission recommended in the 2013 heliophysics decadal survey to study the interaction between the Earth’s ionosphere and thermosphere. The project’s science and technology definition team completed its final report last fall, outlining science goals and design requirements.

For the fourth time, the administration proposes to terminate NASA’s Office of STEM Engagement, though Congress has firmly and repeatedly rejected the idea. Steady funding of $46 million is requested for STEM education activities within the Science Mission Directorate.