The final spending legislation for fiscal year 2018 raises the National Nuclear Security Administration’s budget by 13 percent to $14.7 billion, with most major R&D programs benefiting from the increase.

The National Nuclear Security Administration’s budget will increase 13 percent to $14.7 billion under the final appropriations legislation for fiscal year 2018, a $1.7 billion increase over the amount enacted for the previous fiscal year.

The appropriation is higher than the Trump administration’s request, which sought an 8 percent overall increase. NNSA seeks to further grow its budget over the coming years to support a comprehensive modernization of the U.S. nuclear weapons stockpile and infrastructure. In its fiscal year 2019 budget request, the administration proposed $15.1 billion for the agency and estimated that the request will rise to $17.2 billion by 2023. 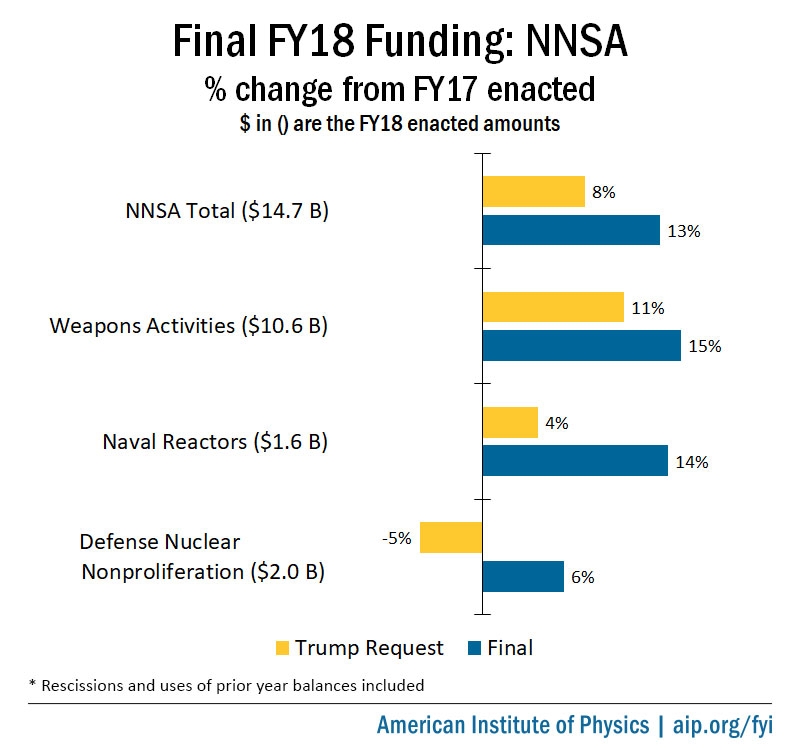 Overall funding for Research, Development, Test and Evaluation (RDT&E) within the Weapons Activities account will rise 10 percent to just over $2 billion, with much of the increase going toward the Science, Engineering, and Advanced Simulation and Computing programs, as shown in the chart below. 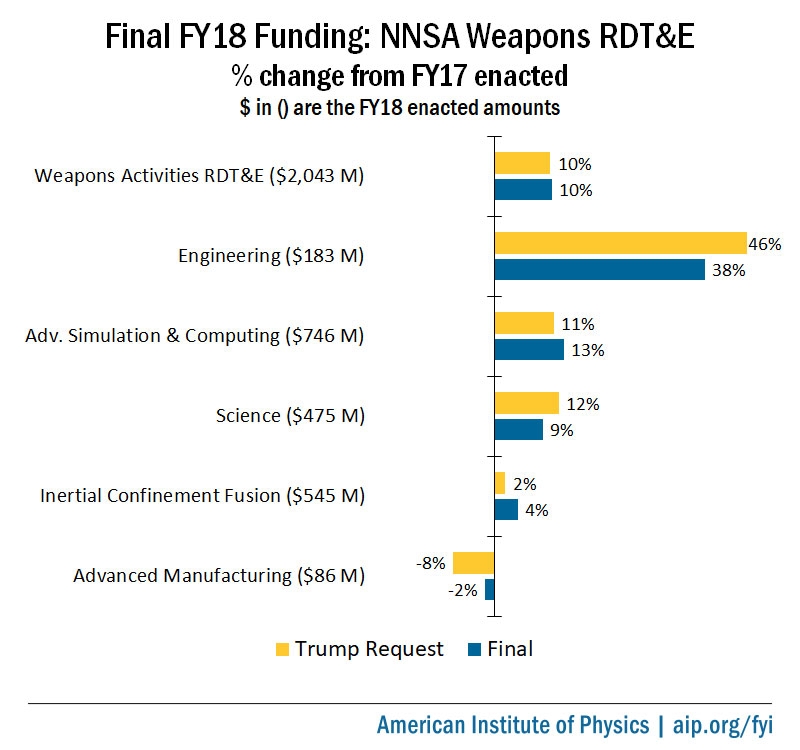 The text of the final appropriations law is available here, and a joint House-Senate explanatory statement containing detailed funding and policy direction is available here. The statement notes that language included in the House and Senate Appropriations Committee reports is also valid, unless otherwise indicated. Detailed tables with funding amounts for programs are available in FYI’s Federal Science Budget Tracker.

New ‘flexible’ weapons not funded. The legislation does not specify any funding for the new weapons systems called for in the Trump administration’s Nuclear Posture Review (NPR), released this February. The administration proposes to develop a submarine-launched ballistic missile with a lower explosive yield and a sea-launched cruise missile to provide the nation with more “flexible” deterrence capabilities.

During a March 20 hearing, House Energy-Water Appropriations Subcommittee Ranking Member Marcy Kaptur (D-OH) pressed NNSA Administrator Lisa Gordon-Hagerty on whether the agency intends to use any funds in fiscal years 2018 or 2019 to advance these proposed capabilities. Gordon-Hagerty replied that “the program of record is what is being funded and not the new requirements that are laid out in the Nuclear Posture Review.” Although she also said that NNSA is “leaning as far forward as we possibly can,” she noted that the agency cannot begin engineering development for new weapons without congressional authorization.

Stockpile Responsiveness Program launching. New weapons aside, many priorities articulated in the NPR will be funded, as they have roots within the fiscal year 2018 budget request. Among them is the Stockpile Responsiveness Program, which the NPR identifies as an important means of giving scientists and engineers more opportunities to exercise skills needed to develop nuclear weapons. Having received an initial appropriation of $2 million last year, the program will begin in earnest this year with a $30 million budget within the Engineering program, $10 million below the requested amount.

New subcritical experiment effort supported. The Enhanced Capabilities for Subcritical Experiments program, a major new effort to remedy gaps in understanding of plutonium implosions, will receive $40 million within the Science program, about $10 million less than requested. An associated construction project, the U1a Complex Enhancements Project at the Nevada National Security Site, is funded at the requested level of $22 million. House report language also expresses support for NNSA’s plans to increase the number of subcritical experiments it conducts to inform the annual assessment and certification of the warhead stockpile.

Fusion facilities targeted for FY19 cuts fare well. The statement specifies $344 million for the National Ignition Facility at Lawrence Livermore National Laboratory and $75 million for the Omega Laser Facility at the University of Rochester, increases of 4 percent and 10 percent over last year, respectively. These increases contrast with the proposed fiscal year 2019 cuts to NIF and Omega, the latter of which the administration seeks to withdraw from entirely over a three-year period. Senate Minority Leader Chuck Schumer (D-NY) advocated for the $75 million figure as part of his plan to push back on the proposal.

However, report language signals that Congress is not completely sanguine about the Inertial Confinement Fusion program. The House report states that NNSA “has made little progress in achieving measurable results towards ignition over the past two years” and directs the agency to submit a five-year plan to Congress that includes performance milestones for achieving ignition. Meanwhile, the Senate report expresses concern that NNSA’s contracting practices are creating “instability” in the vendor base for laser targets.

Exascale initiative ramping up. The statement specifies $161 million for the NNSA’s contribution to the Department of Energy’s Exascale Computing Initiative, a nearly 70 percent increase over last year. The DOE Office of Science, which is partnering with NNSA on the initiative, received a similarly substantial increase for exascale activities.

Path provided for MOX termination. The statement specifies $335 million to continue construction of the Mixed Oxide (MOX) Fuel Fabrication Facility, a plutonium reprocessing project in South Carolina. However, the legislation reiterates a provision in last year’s National Defense Authorization Act that permits DOE to use the MOX funding for other purposes if it commits to remove the plutonium from South Carolina, “ensure a sustainable future” for the Savannah River Site, and certify that the alternative disposal method would cost less than half of the estimated remaining lifecycle cost of the MOX facility. The Trump administration has proposed to terminate the project and pursuing a “dilute and dispose” approach that it argues will be much cheaper. The Obama administration advanced the same proposal.

Plutonium reprocessing policy revisited. Noting that President Carter issued a policy statement prohibiting commercial reprocessing and recycling of plutonium, the House report directs DOE to “investigate the status of this policy” and report to Congress on “the impacts to the U.S. commercial nuclear power industry and whether it is in the U.S. national security interest to continue the policy.”

New funding for Mo-99 production. NNSA currently supports several companies that are developing means of domestically producing the radioisotope molybdenum-99, a byproduct of which is used for numerous medical imaging procedures. In addition to specifying $20 million to cover the remaining costs of NNSA’s existing cooperative agreements, the statement specifies $40 million for a new competitive funding opportunity to “expedite the establishment of a stable domestic source of Mo-99.”

Interest in LEU-powered naval reactors. The Senate report directs NNSA to report to Congress on the “long-term sustainability of high-enriched uranium [HEU]” as a fuel source for naval nuclear propulsion and on “any planned efforts to design a low enriched uranium [LEU] fuel system.” The final statement also specifies $5 million for “national laboratories to develop high-density low-enriched fuels that could replace highly enriched uranium for naval applications.” Given the proliferation risk posed by HEU, some members of Congress have expressed interest in the prospects for propelling nuclear submarines with LEU fuel. The head of the Naval Reactors program has testified that HEU provides significant power and refueling advantages over LEU and that developing a LEU reactor core would take about 10 to 15 years and cost over $1 billion.

Other items of interest

Influx for infrastructure repair. Funding for maintenance and repair of facilities will increase by nearly 60 percent to $515 million. In recent years, NNSA and congressional leaders have articulated an urgent need to tackle NNSA’s large backlog of deferred infrastructure maintenance.

Ire over indirect costs. The House report states that the DOE Inspector General “has identified issues with the management and oversight of the indirect cost pools at the NNSA sites, including the use of general and administrative funds to conduct research into laser inertial fusion energy,” among other activities. The report then directs NNSA to submit a plan to Congress on how to “reduce the rates of its overhead indirect cost pools at each site by at least five percent in aggregate by fiscal year 2020.”