Kratsios Steps In After Griffin Resigns as Pentagon R&D Head

U.S. Chief Technology Officer Michael Kratsios has been appointed to serve part-time as acting under secretary of defense for research and engineering. The role was vacated this month by Mike Griffin, who resigned after an at-times tumultuous two year tenure. 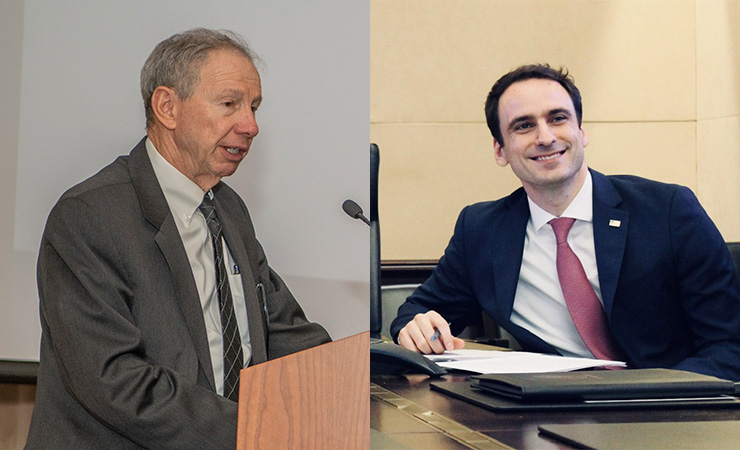 The Department of Defense announced on July 13 that U.S. Chief Technology Officer Michael Kratsios had been appointed acting under secretary of defense for research and engineering. Kratsios has been a senior official at the White House Office of Science and Technology Policy since 2017, and was its de facto head until 2019. Yet, at 33 years old and with no previous defense-sector experience, he is an unusual choice to oversee DOD’s more than $100 billion research, development, test, and evaluation (RDT&E) portfolio.

Kratsios is filling the shoes of Mike Griffin, who stepped down from the job on July 10, accompanied by his deputy Lisa Porter. Announcing their impending departure to staff last month, they wrote they were leaving for a “private-sector opportunity,” and have since registered a new business together called Logiq, Inc.

Griffin was the first person to hold the under secretary position after Congress created it in 2018 to help expedite the development of new defense technologies. Forcefully pursuing that goal, Griffin has championed initiatives such as DOD’s new Space Development Agency, though he also clashed repeatedly with other defense officials and Congress. However, there have been no reports that any specific incidents precipitated Griffin’s departure, or of whether the move is part and parcel of the broader turnover in senior Pentagon personnel currently taking place.

In establishing the under secretary position, Congress elevated responsibility for RDT&E out from within the organization overseen by the under secretary for acquisition, technology, and logistics, as that position was then called. Critics, including within DOD, argued such a move would cut crucial links between the development and acquisition of technology. Congress countered that innovation was not well served by the cumbersome managerial controls used by DOD’s acquisition bureaucracy and that the “healthy tension” between the functions could be “mitigated through effective leadership and management.”

Taking on the position, Griffin said he would prioritize efforts to rapidly transition technologies from development into acquisition programs. He also brought decades of experience in the defense and space sectors, having worked in the aerospace industry, as head of technology for the Reagan administration’s Strategic Defense Initiative, and in several senior positions at NASA, including serving as the agency’s head from 2005 to 2009.

During Griffin’s time as under secretary, DOD’s RDT&E budget increased from $74 billion to $105 billion, enabling expanded work in areas such as space technology, hypersonics, and secure microelectronics. Griffin also presided over a reorganization of DOD’s research and engineering bureaucracy and was given leeway to select many of the senior officials reporting to him, likely including Porter, who joined DOD in October 2018.

Porter had previously reported to Griffin when she was head of NASA’s Aeronautics Research Mission Directorate during the period that he led the agency. She has also served as director of the Intelligence Advanced Research Projects Activity and the research arm of In-Q-Tel, a nonprofit venture capital firm funded by the U.S. intelligence community.

The reorganization of Griffin’s office has paralleled DOD’s ongoing reorganization of its space technology activities. As both efforts proceeded, Griffin emerged as a key advocate for the Space Development Agency (SDA), an entity created under his authority in March 2019 to accelerate space technology projects. However, the agency also faced opposition, including from then-Air Force Secretary Heather Wilson, who argued it lacked a clearly defined mission. Griffin also clashed with SDA’s first director Fred Kennedy over the agency’s direction, leading Kennedy to leave after less than five months on the job.

This year, new tensions arose over how quickly SDA should be incorporated into the Space Force, which was established within the Department of the Air Force in December. Current Air Force Secretary Barbara Barrett has advocated for an expedited transfer. However, a week before announcing their departure, Griffin and Porter published an op-ed with current SDA Director Derek Tournear arguing the transfer should not be rushed. “As a disruptor, SDA must be allowed to operate outside of legacy acquisition systems until it has had time to innovate, flourish, and deliver,” they wrote.

Griffin also became enmeshed in a battle over the Strategic Capabilities Office (SCO). Created in 2012, SCO seeks innovative uses for current and near-term technologies and now has a budget exceeding $1 billion. Although at one point it reported directly to the defense secretary, DOD folded it into Griffin’s organization in 2018, and he in turn sought to move it further down into the Defense Advanced Research Projects Agency, asserting his office could not provide adequate oversight. That proposal prompted SCO Director Chris Shank to resign after Griffin discovered that Shank had opposed the move in private communications with congressional staff. In the end, Congress removed SCO from Griffin’s oversight and placed it under the deputy defense secretary.

Congress similarly rebuffed Griffin’s attempt last year to cancel DOD’s standing contract for JASON, a group of prominent scientists that advises agencies across the federal government. While Griffin’s office stated it would be more efficient to issue piecemeal contracts for studies, he reportedly attempted to prevent the National Nuclear Security Administration from taking over the standing contract, potentially threatening the group’s existence. Ultimately, lawmakers placed the contract in the hands of the under secretary for acquisition and sustainment. 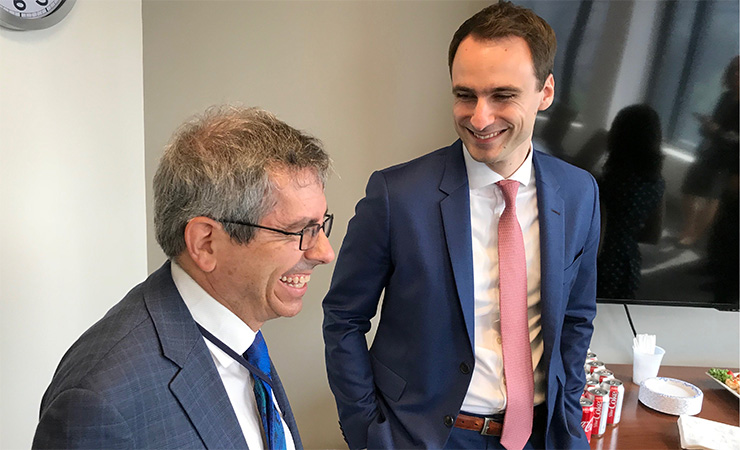 Michael Kratsios, right, at a 2018 event marking the opening of the new offices of the Science and Technology Policy Institute, which was directed at the time by Mark Lewis, left. Lewis is currently acting as deputy under secretary of defense for research and engineering.

Welcoming Kratsios to the department, Defense Secretary Mark Esper wrote in a statement, “In seeking to fill this position we wanted someone with experience in identifying and developing new technologies and working closely with a wide range of industry partners. We think Michael is the right person for the job and we are excited to have him on the team.”

Kratsios earned a bachelor’s degree in political science from Princeton University in 2008. He then served for several years as chief financial officer at a floundering hedge fund founded by Silicon Valley entrepreneur Peter Thiel before becoming chief of staff at another Thiel-owned investment company in 2014.

President Trump appointed Kratsios as deputy chief technology officer in the White House Office of Science and Technology Policy shortly after his inauguration in 2017, and Kratsios was the office’s highest-level official until Kelvin Droegemeier arrived as director two years later. Trump then nominated Kratsios to the still-vacant position of chief technology officer, and the Senate confirmed him to the job last August. He will remain in the position while serving as acting under secretary.

At OSTP, Kratsios has overseen policy initiatives related to such emerging technologies as commercial drones, artificial intelligence, quantum devices, and 5G telecommunications. By 2019, the White House had begun to use the term “Industries of the Future” to encapsulate its interest in promoting progress in selected technology areas, and the agenda has attracted considerable bipartisan support.

Kratsios is moving into a potentially thornier position at DOD, not least because overseeing the department’s sprawling portfolio of big-ticket R&D contracts has challenged even seasoned, full-time administrators. In addition, Kratsios is reportedly expected to make 5G technology a top priority. While DOD shares the White House’s goal of aggressively deploying 5G, it is currently locked in a heated dispute with the Federal Communications Commission over an allocation of spectrum bands to the 5G company Ligado Networks that the department asserts could disrupt the Global Positioning System.

As acting under secretary, Kratsios will work with Mark Lewis, who is now filling the role vacated by Porter on an acting basis while continuing as director of defense research and engineering for modernization. Lewis is a well-known figure in the defense technology sphere and served as Air Force chief scientist from 2004 to 2008. Before Griffin brought him to the Pentagon last November, Lewis directed the Science and Technology Policy Institute, an organization operated by the Institute for Defense Analyses that conducts policy studies for OSTP and various federal agencies.